Marvel has the lion’s share of titles on this week’s list. It’s important to note that the bulk of them are number ones and the others are Star Wars books. It’s a transition month but the amount of Star Wars books are pretty much going to be the heavy sellers. So where is this going to end up? I’m predicting a Star Wars choice, but let’s find out and get to the list. 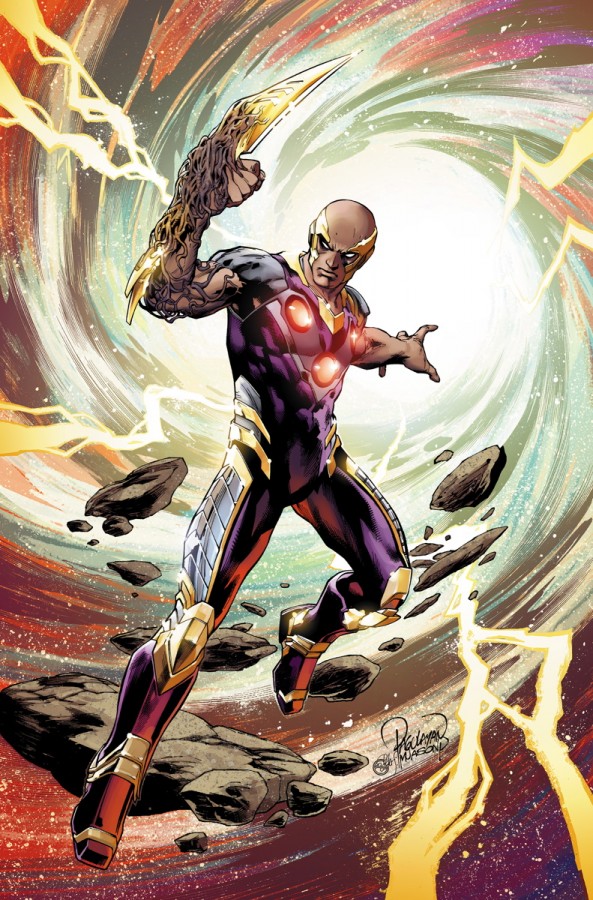 I picked this up out of simple curiousity. I mean it … Carlos Pagulayan’s cover is great but you can’t judge a book by its cover, right? Still, I was curious. Telos was a big let-down in Convergence – the character that never was, if you like. He started off as the major villain threat only to be reduced to Braniac’s lackey and then discarded as a proto-hero figure who simply disappeared from the multiverse for some undefined purpose – hence the curiousity.

Is it a morbid sense? Yeah … I think so; sort of a “can’t-take-your-eyes-from-the-road-accident” kind of curiousity. I didn’t have a lot of anticipation of success for this book. I realize it’s not a noble attitude, but I guess it’s important to look at why things failed in order to learn from them.

Still, I think Jeff King was given a dud subject to write about. Telos isn’t a compelling character and his hatred of Brianiac isn’t much of a hook for us to want to get to know him. Sorry to say, but with the distance in time between the end of Convergence and the release of this title, it’s just not current any more. This should have been published long ago, when Convergence and Telos, for that matter – mattered. 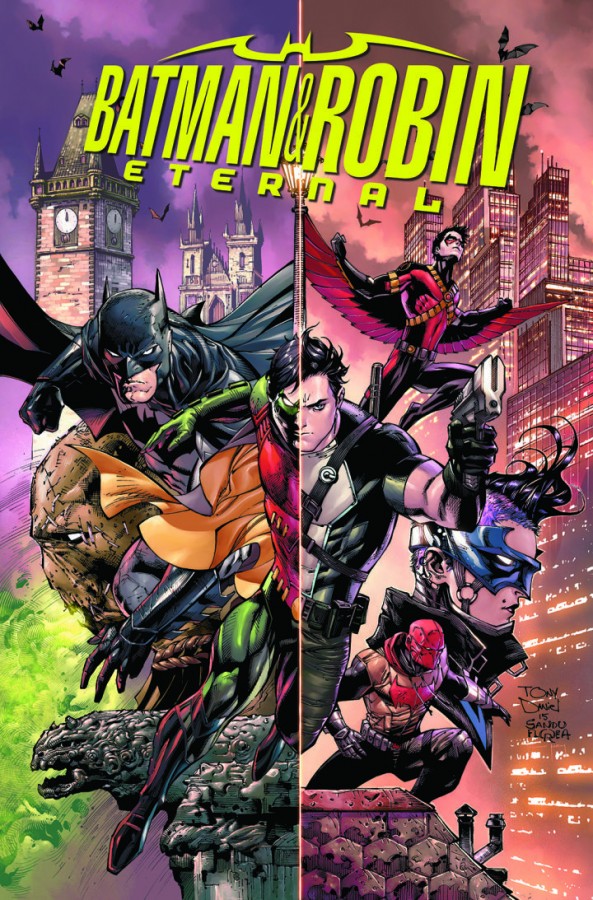 To be frank, I was on the verge of declaring this another naked sales book, but I have to confess, after ignoring all the appearances of the former Batman partners, I liked how this managed to integrate itself into the new Batman ‘verse. Even if the main title doesn’t know how Batman manages to fit itself into the new DC Multiverse, at least this one is following its lead.

Good story and definitely one to keep my eye on. 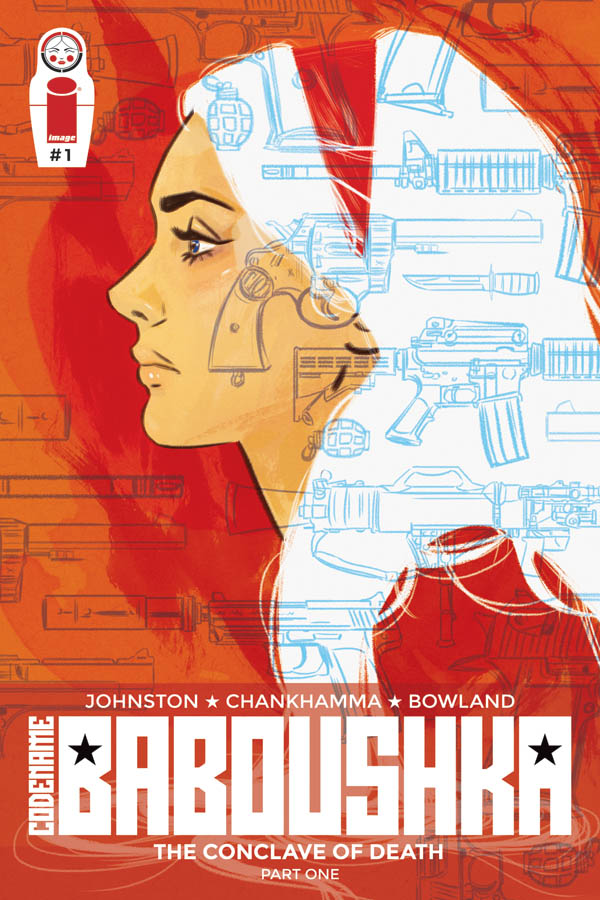 The problem I can foresee with the launching of this title is that it’s so similar to another Image Comics title – Terry Dodson’s Red One. I don’t know if that will have any effect on this book’s sales but as much as I like Anthony Johnston’s work, I can’t say that I was immediately taken by it. I found it relatively predictable.

We Stand on Guard #4 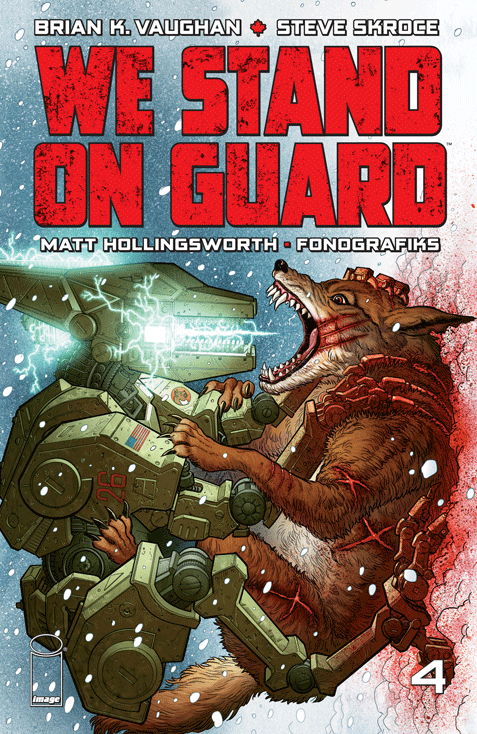 It’s a good title, but I’m waiting to see when the Canadians lose that identity of always being nice. Let’s face it: that’s the Canadian rep overseas; we’re the polite ones who always say “excuse me” when we apologize and “sorry” when we want clarification. How long until Brian K. Vaughn shows us how bad-ass Canadians can be?

Well, wait until the last page. 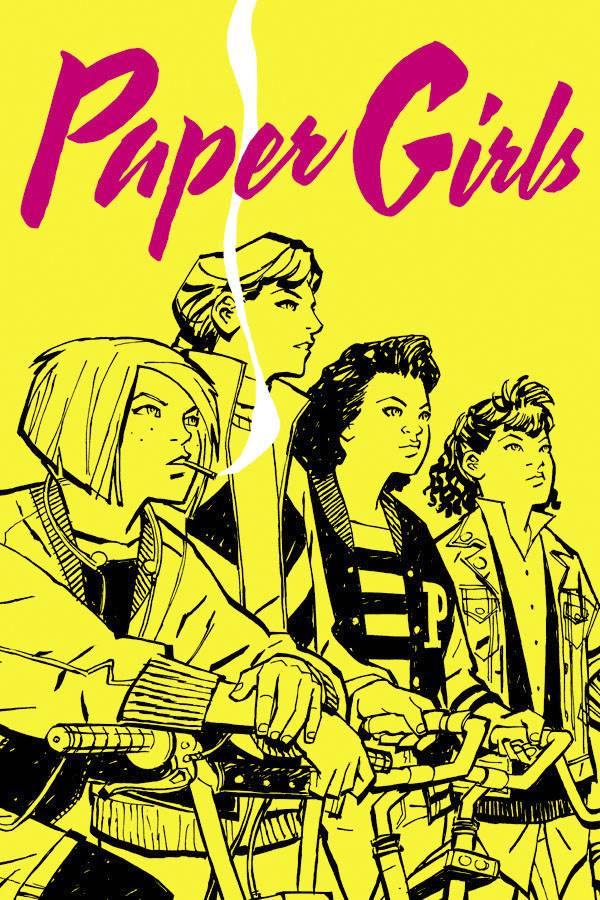 A bit of a gamble on this one. A sales description of this title reads “think Goonies – but with girls.” Well, I liked The Goonies and I like girls, so I figured I’d better look at this one. I can’t say no to Brian K. Vaughn an Cliff Chiang is definitely a talent.

It’s a good-sized book for the price of $2.99. But my mercenary Scottish thriftiness aside, I was immediately surprised by the story. It definitely wasn’t what I expected. I was thinking more down-to-earth adventure while pre-adolescent children discover more about their identities, but the direction this book took me in certainly took me by surprise. I enjoyed this late 1980’s adventure.

Dan Slott is the script magician on part one of this title and it’s drawn by Giuseppe Camuncoli – who I conffss I’ve never heard of. However, his art is definitely 1980’s John Romita Jr.- inspired, so I’m willing to give him a try. The first story “Worldwide” shows us Spider-Man now possessed of all the resources he could use and Parker Industries is now a worldwide conglomerate.

I can’t say I’m crazy about this new iteration of Spidey, but Dan Slott knows his Spider-dialogue. Despite my hesitations, I actually liked this and though I missed Mary Jane, Peter Parker is still Spider-Man.

… and the Spider-mobile was kinda cool.

“The Last Time” by Peter David and artist Will Sliney (why do I not know any of these new guys?) is a five-pager snooze-fest that brings Spider-Man 2099 into the fold. “Breaking Bad” by Robbie Thompson and Stacey Lee sees a clumsily-drawn story of Silk and the subsequent stories that follow are all sales-tales to introduce a new integrated model of the Spider-verse. No wonder this thing was over-sized.

In one word: meh. 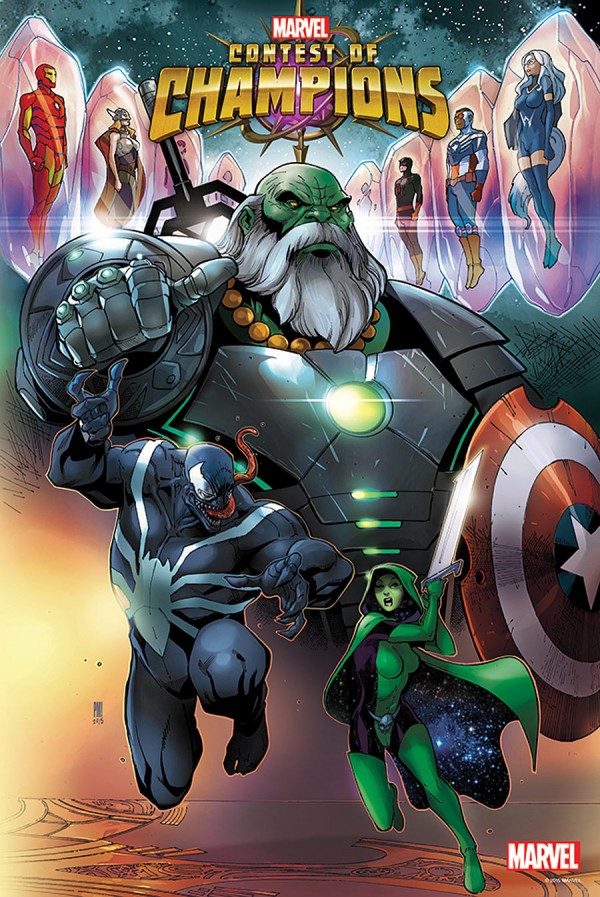 Interesting how the Contest of Champions, which preceded the Secret Wars back in the day now finds itself part of the rebooted Secret Wars.

You know what? I’ll make this brief: see my comments about Point One. 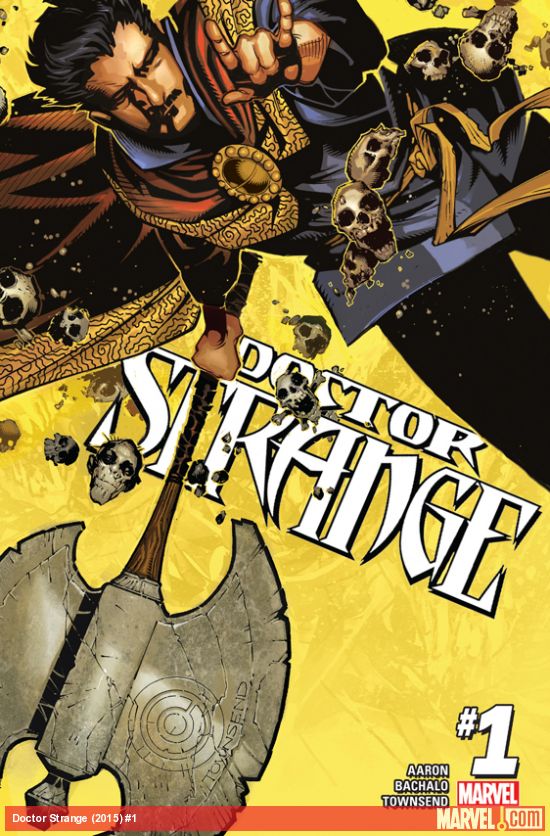 Wow, I can’t say I like Chris Bachalo’s work. His art is definitely energetic, but the expressions of his characters always seem like they’re shocked or surprised. I’m not a fan.

However, this is Jason Aaron’s moment to shine. He is an amazing writer and I love the reboot. Not only has he made Doctor Strange accessible and relatable to the new generation of readers, but he has done it seamlessly and almost without effort. This is an awesome rendition of the Sorcerer Supreme and I have to say, it’s about time. Nothing short of awesome is in this book.

All-New All Different Marvel Point One #1 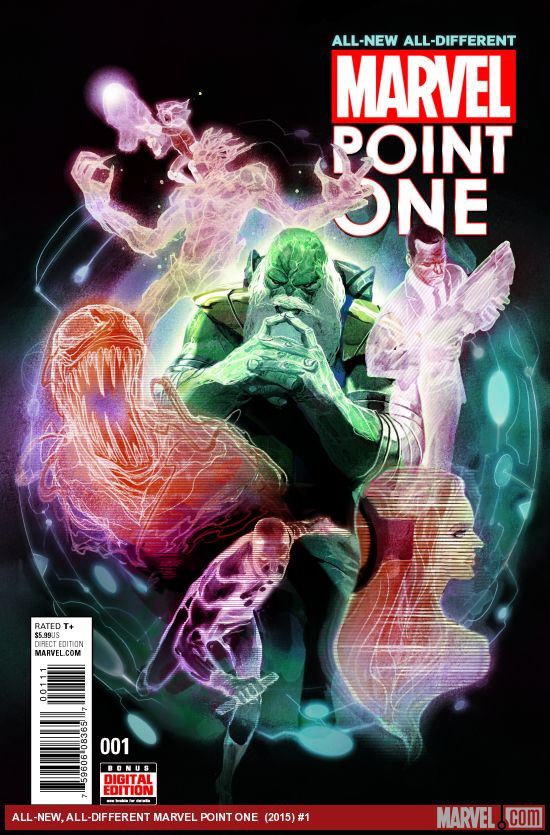 The first thing you notice about this book is its size. The second thing you notice is how the art on the first page of the story clashes with the advertisement for the Iron Man toy on the preceding page. Seriously … who was the production editor on that one? They really needed to do some preview work. The art, by Paco Medina, does not entice the reader; it’s dark, heavy and difficult to read. For an introduction, it’s not great.

This is basically a grab-bag collection of stories designed to lead up to Contest of Champions aling with an assortment of other titles. With an eclectic collection of characters like Maestro, Groot & Rocket Racoon, Carnage, Venom, Agents of SHIELD, the Inhumans and Daredevil, this read like a shopping list and an expensive sales gimmick. I hate that I actually bought into this.

Art was supplied by the aforementioned Paco Medina, Mike Perkins, Filipe Andrade, German Peralta, Stefano Caselli and Ron Garney. I’m not a fan of any of these folks’ work. Writing was supplied by Al Ewing, Gerry Conway (qu’elle surprise) Skottie Young, Marc Guggenheim and Charles Soule. Even the skill of these talented scribes wasn’t enough to save this book from the dregs of disappointment. Save yourself the whopping $5.99 and find something decent. There really wasn’t anything all new about this, and in fact, you might say it was actually pointless. 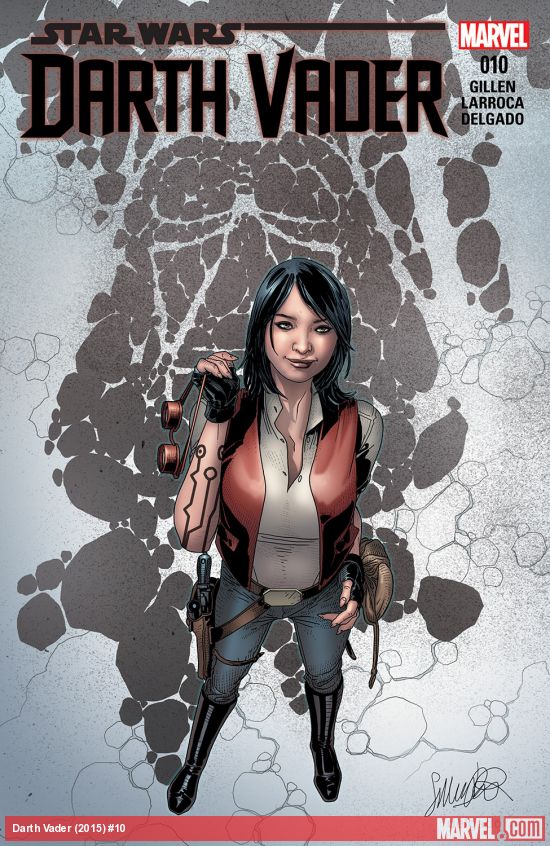 One of my new favourite characters …Doctor Aphra has definitely made herself part of the new canon in my book.

This is so easy to like. I mean, Darth Vader, struggling to gain his power back, has to use guile, politics, and whatever in order to validate what die-hard Star Wars fans already know: Vader is pure intelligent malevolence incarnate. Every issue that Keiron Gillen writes just proves that one step further. But it’s the evil that surrounds him that also accentuates this idea. This book is just such a glorious testament to the power of the Dark Side that it’s a permanent yes on my pull list. 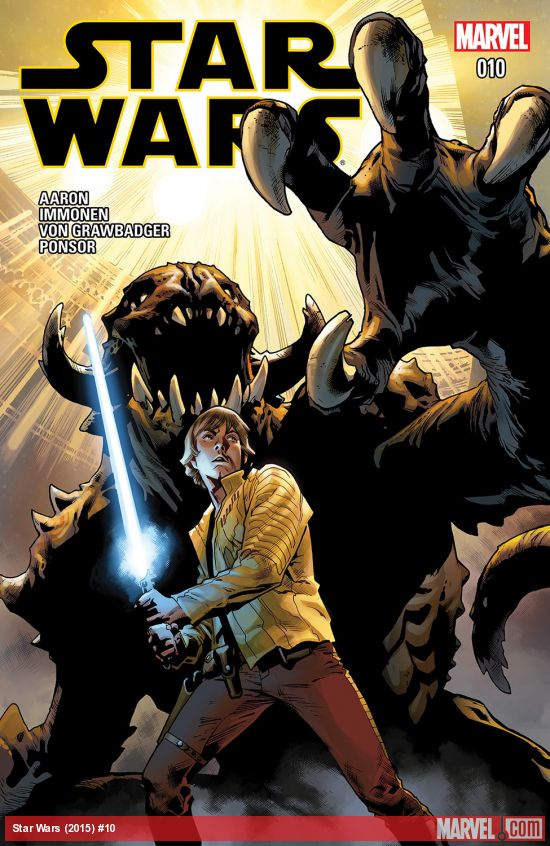 There is a push to make a new Star Wars mythology in the absence of the new one. Question: will Disney allow Marvel to keep the material they published in the 70’s and 80’s as canon? Well, Doctor Aphra from Darth Vader has prove herself a valuable addition. Who else will they introduce?

Given as she was revealed in the last issue, I don’t see that as much of a spoiler, however, she is an example of what talented writers like Jason Aaron are doing with the property. I want to know who the mysterious Gamemaster is and I love the fact that the bounty hunters are back in full force. I

Those aren’t spoilers either … trust me, you need to read this book to get a handle on the new mythology that’s quickly coming down the pipe. 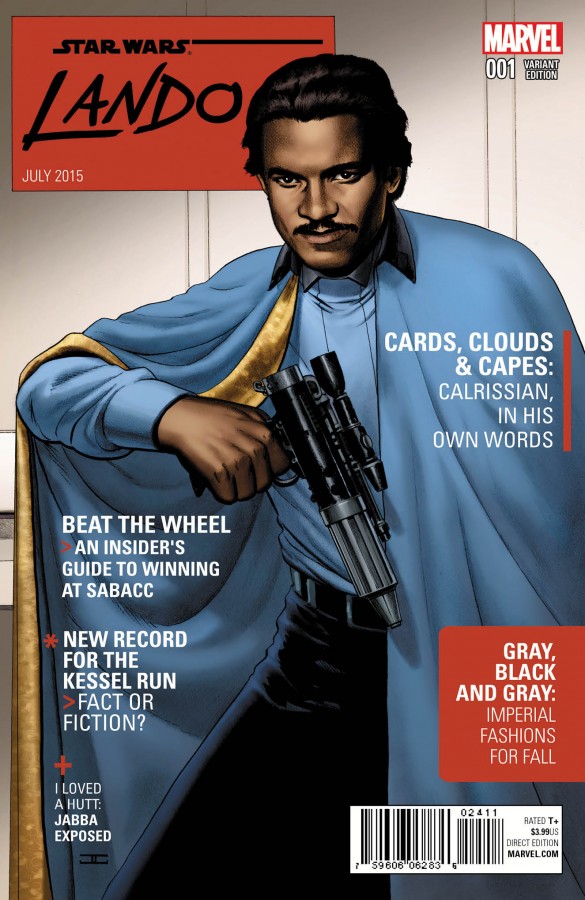 This is a variant cover by John Cassaday. I like it much better than Maleev’s art, and if you’ve been reading my coverage of this title, then that shouldn’t be a surprise to you.

Not the ending to the series I was hoping for, but a reasonable one, nonetheless. It’s powerful to have charm and the ability to manipulate, but in the end there has to be a reckoning and Lando comes to his that ties into his eventual future in The Empire Strikes Back and The Return of the Jedi. This is a good segue title that feeds into the mythology of Star Wars very well. 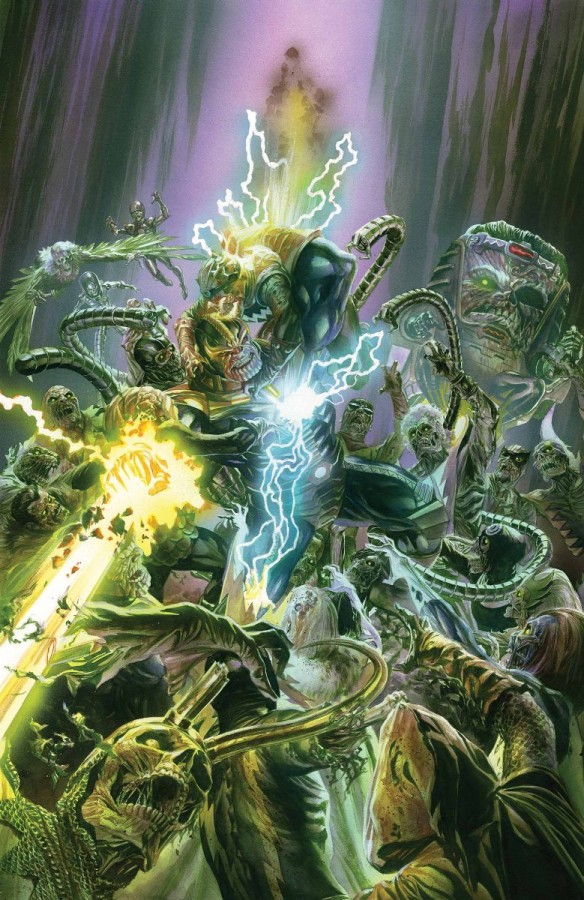 I can’t say that I was overly impressed with this issue. It felt rushed and in the course of trying to knit all of the ancillary titles together into a single storyline, there was information that the reader couldn’t access unless she had read all of the supporting titles. There’s no way that anyone could have done that and keep this book together. It’s too big and large projects often have a tendency to fragment in the absence of a concerted amount of supervision.

I’ve got to give the honour of the title of the week to:

Yeah … I was surprised that I’d give a Chris Bachalo drawn title the nod, as it were, but it’s really all Jason Aaron. Somehow he managed to make the Sorcerer Supreme relevant again. His ability to view reality, his friendships, the fact that he makes house-calls to normal people who have supernatural problems – it all factors into a totally new rendition of Stephen Strange who I can get behind and read about in the 21st century.

So, imagine my surprise: I thought I was going to pick a Star Wars book. Heh .. well done to Marvel Comics for an awesome reboot and honourable treatment of a classic character.

But it’s all Jason Aaron.