Yeah, it’s a perfect Star Trek storm this week with all of IDW’s Trek titles hitting the shelves all at once. While this would have delighted the adolescent in me, the grizzled comic veteran now has to pick from his favourite children.

Oh, boo-hoo. The Star Trek and comic geek is now being hit with both Trek and comics at the same time. I know, my diamond shoes are too big and the fifty-dollar bills won’t fit in my wallet.

I take this as a sign of providence, actually. When you think that we are presently in the first season of a brand-new Star Trek television show and I happen to be speaking with one of the producers of said Star Trek show today about Star Trek stuff, then maybe this is an omen of good things to come?

Maybe there’s a special chair waiting for me? 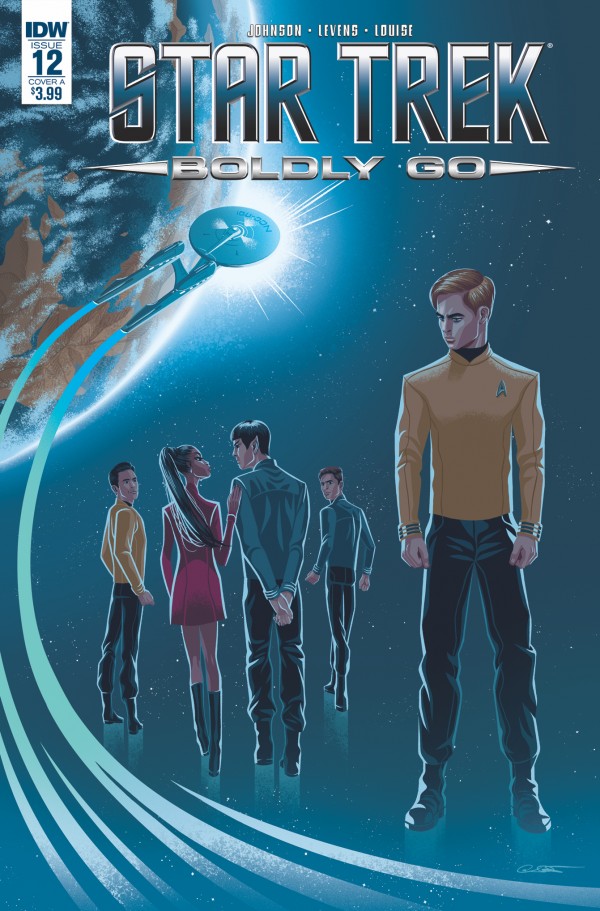 When last we left our valiant Captain Kirk, he had just been sucker-punched by the shape-shifting Captain Garth (still one of my favourite Star Trek villains of all time.) and was left on Antos IV, while the aforementioned Garth had assumed his form and taken the Endeavour.

This is fairly well-contained trek adventure with a respectful nod to a great storyline from the original Series. Megan Levens continues to find her pace with writer, Mike Johnson, in their second issue together.

I can’t help but feel that this one felt somewhat rushed.

Like I said, I think it’s the pacing; to my mind, this was a story that could have been extended for another issue or two. I wanted to find out more about what the Antosians did to Garth. He took the ship through subterfuge and guile, but lost it so easily to a very dirty and vague “space pirate” trick.

Fun read, but I felt there could have been more. 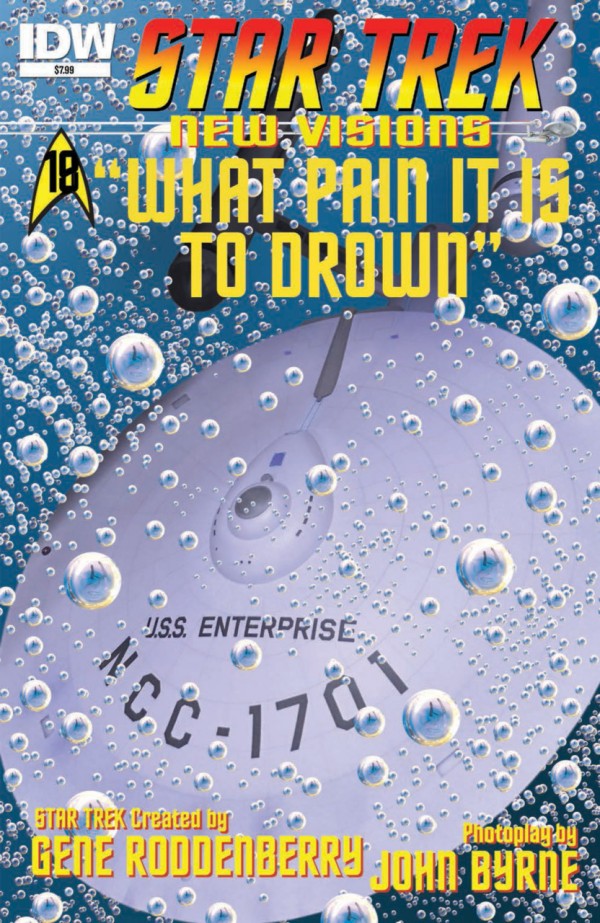 Every time I pick up one of these books, my heart races. I’m a kid again, watching my favourite sci-fi show and not caring that I’ve seen this issue about fourteen times before.

Vic Mignogna of Star Trek: Continues and I have something in common: he used to use a cassette recorder and memorize the lines to every TOS episode by listening to them again and again. I did the exact same thing and used to get severely pissed off whenever someone would walk into the room, spoiling the quality of the recording.

With this comic, I feel I need to go back and re-read it to memorize these lines. John Byrne has done the Star Trek universe a great service by re-birthing the Original Series characters and sets into a new incarnation.

Titled What Pain it is to Drown, even the title gives you that sense of watching a new episode. I even superimpose the interstitial music in my head whenever I turn a page.

It’s the details in this book that make it so true-to-show. The background shadows where camera lights would track the actors, the incidental actor-extras that seem to glide past the captain’s chair and even the accents are carefully preserved in the speech bubbles. It’s a true labour of love and Byrne needs to be credited with the amount of effort that goes into this book.

But even the encounter with the alien and the resolution is so pithy and characteristically Trek. Byrne knows Trek and that much is clear.

I love the new environmental suits, the holographic imagery and even Janice Rand’s uncharacteristic beehive hairstyle has been replaced by a more curtailed and attractive style. [EDIT: Byrne has dubbed this a ‘bob’ – and it is hereto dug.] Byrne has placed his own stamp upon this franchise and it’s absolutely wonderful to read. 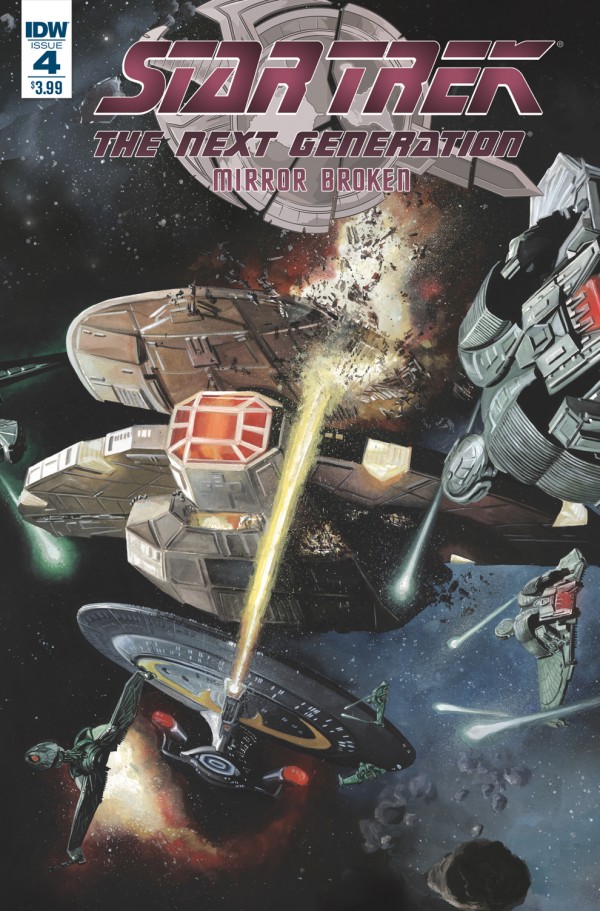 And from the Original Series, we go to a warped (no pun intended) version of the next historical iteration of Trek, but this one is set in the most delightfully evil of scenarios: the Mirror Universe.

In the last issue, we saw Picard and his band of renegades steal the Enterprise from the Utopia Planitia Shipyards. Now this issue is about seeing what this cunning and ruthless captain can do with it to preserve the faltering Terran Empire.

Wow … what an awesome display of Trek knowledge on the part of Scott and David Tipton along with J.K. Woodward’s brilliant artistry.

Not only does Picard take the ship, but he manages to staff it in the most deliciously twisted Piacrd way possible. Hidden grotesquerie, Wesley Crusher, shakes off his masquerade of autism and displays his intellect in a way that the Captain can exploit, much to the feeble protests of his mother.

The captured El-Aurian, Guinan, is locked in an isolation cube, only to be brought out at the pleasure of the captain for advice and insight, when he deems it necessary.

Finally, we see the power of the Galaxy-class starship flex its mighty muscles in a confrontation with three Imperial Terran starships, demonstrating the power of its central phaser cannon. Fans may recognize this as the same cannon that was used in the futuristic Enterprise in the final episode of TNG, titled “All Good Things …”.

Yeah … this issue is THAT good. 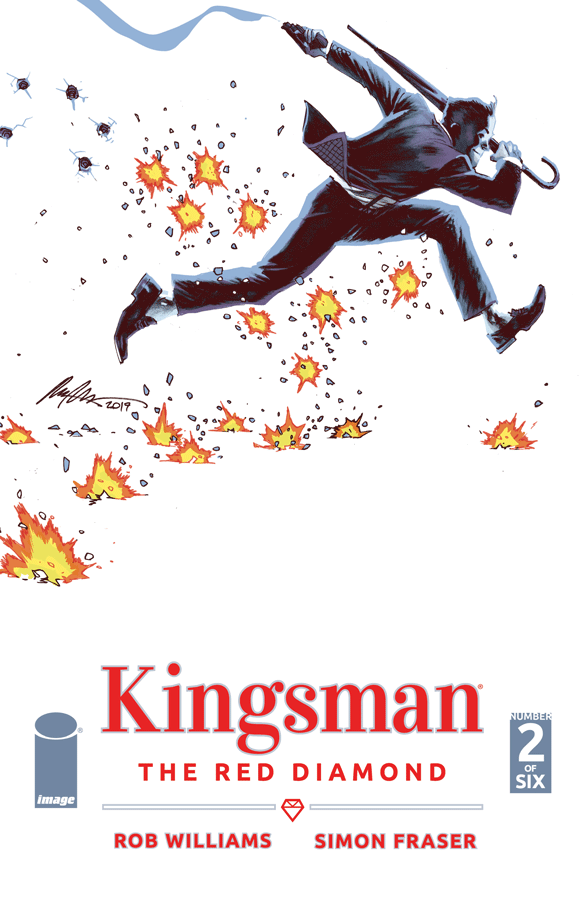 Absolutely corking! A right-top smasher that one is, my bruv. It’s a bleedin’ shame to see a man of the streets can himself along with the toffs and the garter-polishers and treestumps and … all that.

I’ve run out of Cockney euphemisms.

Of course, Rob Williams and Simon Fraser haven’t. I’m actually Scottish, but I was born in Wales, though my family on one side considers themselves English. Reading this makes me pine for the Homeland. I consider myself British and the defense of the Realm has always been a soft spot for storytelling with me.

I love this franchise … and the fact that it is becoming a franchise! With the second film soon to be released in theatres, it’s very gratifying to see Mark Millar’s creation take off in a fiery plume of success! I love this book and it’s a great pleasure reading it.

Oh, I think you’ll recognize the most memorable line when you see it. 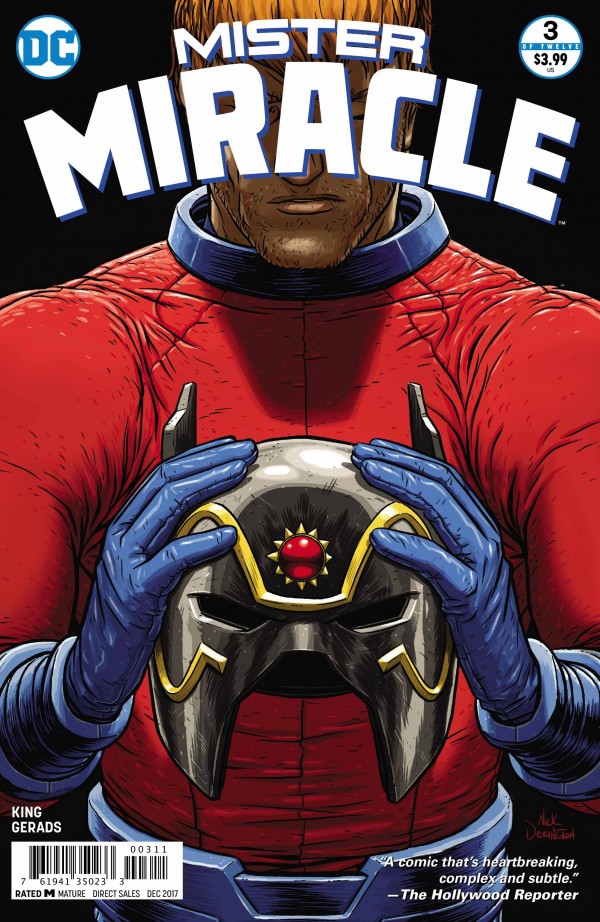 Oh my God … where did Tom King dig up that horrifying Christmas story? I’m almost traumatized reading it and hoping that it really isn’t true and just some fiction made up out the imagination of this gifted writer.

But … most fictions are cobbled together out of pieces of reality.

This story is making me consider what Scott Free has to escape from. Is it some sort of psychosis instilled with him because of Highfather’s death, the war or the fact that maybe Scott Free is already trapped within some sort of illusionary trap that the Agents of Darkseid or other forces have created?

I’m drawn to this book out of a sense of irresistible curiosity. There’s a different dimension of violence, politics and structure to the New Gods that seems to have matured since the days of its original inception and I have to think that Kirby would have loved it. After all, the New Gods are lie their predecessors: flawed and ultimately more human than they realize.

King has seen war. Clearly these experiences have weighed heavily in his telling of this story.

I think I’d like to get drunk with this guy. Storytelling is his forte and people tell more stories when they’re into their cups. 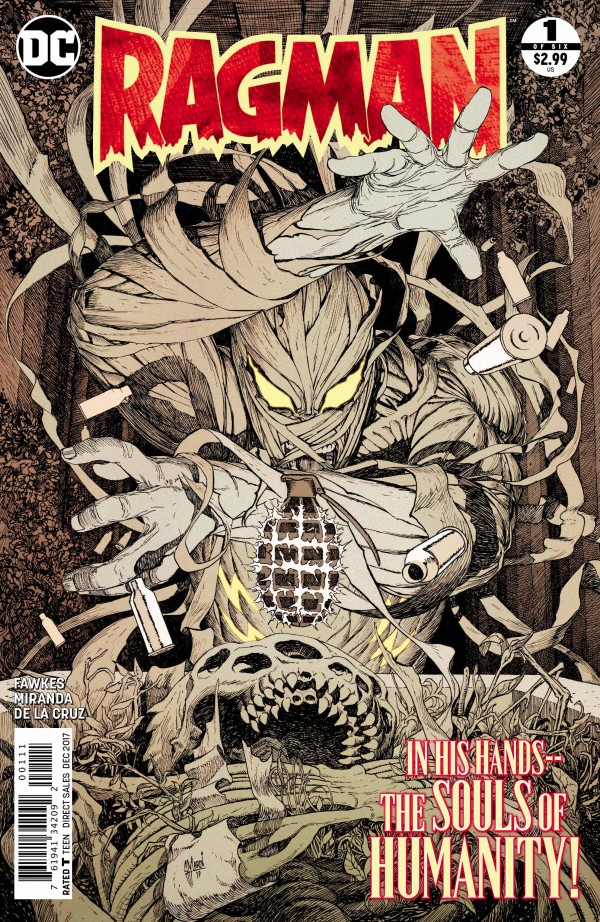 The retired vet angle is a little worn-out but it doesn’t detract away from the novel way of re-introducing this character back to the DC universe.

Ray Fawkes delivers a compelling and mystical tale, very much in the same vein of Moon Knight, in which we are introduced to this new character’s debut. I’m definitely intrigued and very much want to read more and see where it goes. 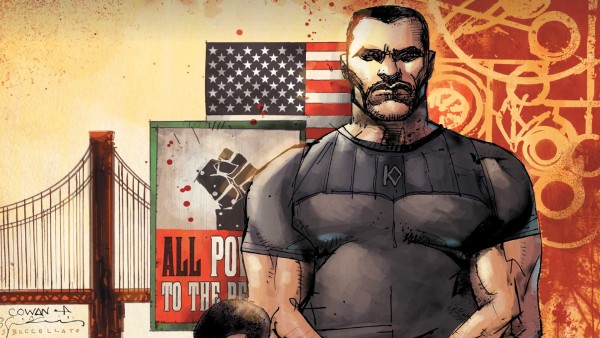 This is from the new imprint that DC is delivering. It’s very much along the lines of adapting the existing characters – like Oliver Queen – into twisted versions of their television selves. I honestly didn’t know what to expect from this and deliberately cut myself off from news about the Wildstorm line, just to give it a fair chance.

I have to say, I’m not overwhelmed. Not to say that it is a bad comic, it’s just that to get used to a television version of Green Arrow and then to see this one damaged and corrupt … well, I’m definitely rooting for Cray to eliminate him but if that’s what this book is going to be about, then maybe I’m not the right reader for it.

I’ll keep an eye on it and see where it goes.

But then that brings us to the moment you’ve all been waiting for.

The Pick of the Week has got to go to …

Like other titles had a chance with the plethora of Trek titles on the loose! I’m going to expound some false hubris and believe that IDW really knew how to get to me this week.

I desperately wanted to give this to Mirror Broken, but it’s a mini-series (although I hear through the grapevine that there might be a chance of a second series? Waiting for my little birds to chime in at this point …) and it won’t have the same staying power as New Visions.

Byrne’s work is getting exponentially better. It’s not just the added richness of images and his own photoshopped creations; it’s the pace, the tempo and the fact that he adds so much to the background of the scenes he presents. Everything, including the various rooms is wealthy with props of his painstakingly and patient resourcing or creation in order to give the reader the sense that he or she is reading something that could have been created back in 1967.

But then he takes it one step further and incorporates added touches of his own design to the 60’s version of the future that really make this an original Byrne creation. Byrne has always been a comic legend in my mind, but now he has ensconced himself firmly into the other fandom that I prize so well – Star Trek.

When are we ever going to meet and discuss Trek stuff?

Just one of those things that are definitely bound to happen. Given my luck with Trek material this week, who’s to say it won’t happen?

Until next week, keep your dilithium chambers dry! Read the book – you’ll see what I mean!