Well, the city of Toronto is ecstatic with the Blue Jays’ victory over the Texas Rangers tonight.

I don’t purport to be any sort of Baseball fan but I am a fan of Toronto. This city has so much to offer the world. As we’ve seen tonight, a major baseball team franchise poised to go all the way but more important (well, in my twisted set of priorities), a stunning assortment of home-grown comic talent that rears upright like some sort of four colour Canadian Lernean Hydra.

Gaze in awe at the talent of guys like Leonard Kirk (though he doesn’t technically reside in the city), Darwyn Cooke, Jeff Lemire – too many to list here but they definitely do their bits to bring pride to this city.

Yeah … the entire city is aglow with baseball pride but I just want to read my comics. 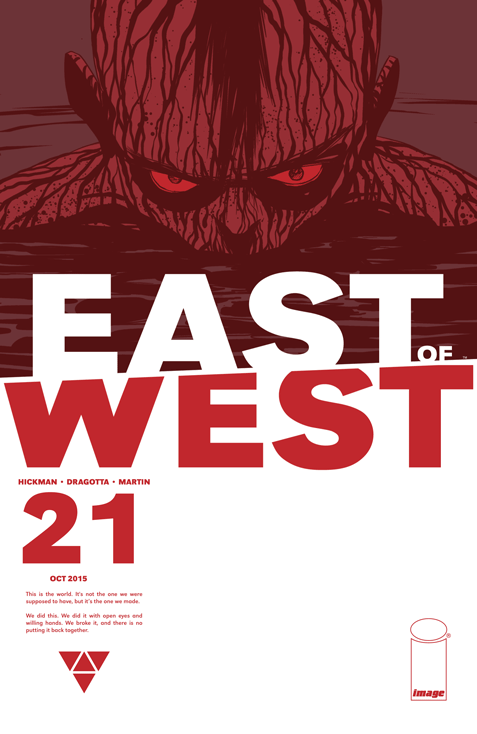 Intrigue, world-building and post-apocalyptic discoveries are all combined in this amazing series to create the most fantastic Dystopian version of the United States I’ve ever seen. In my opinion, this comic is the defining visual rendition of this style of fiction, never mind comics. The level of detail that Hickman and Dragotta strive to incorporate into their storytelling is nothing short of phenomenal. This is definitely on my top five list of favourite comics. 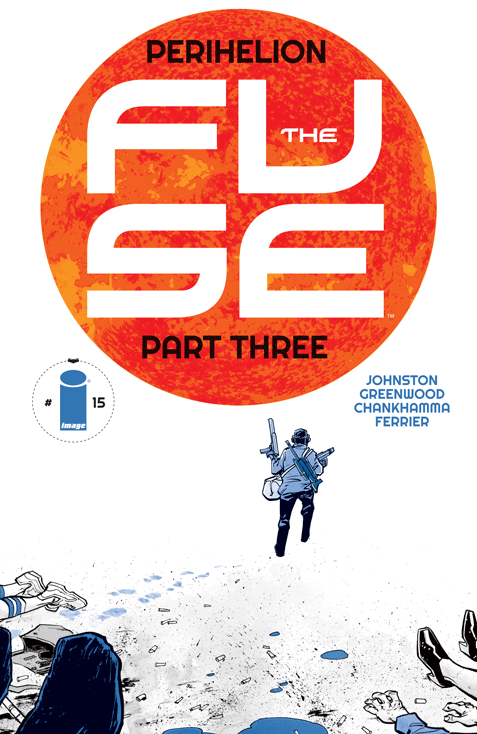 Again … another great story set in a Dystopian envisioning. What I love about this crime noir tale on a space station is how believable it is. It’s completely conceivable to accept the fact that the technology will exist in the future when a space station could secede from Earth and form its own sovereign state in orbit around Earth. I think it was P.T. Barnum who said that the larger a story’s premise, the easier it is for people to accept it. In this case, what stands out is the human drama elements. Police work is still the same, human egos, desires, weaknesses – these are all same in the future as they are now and that makes this comic even more believable. 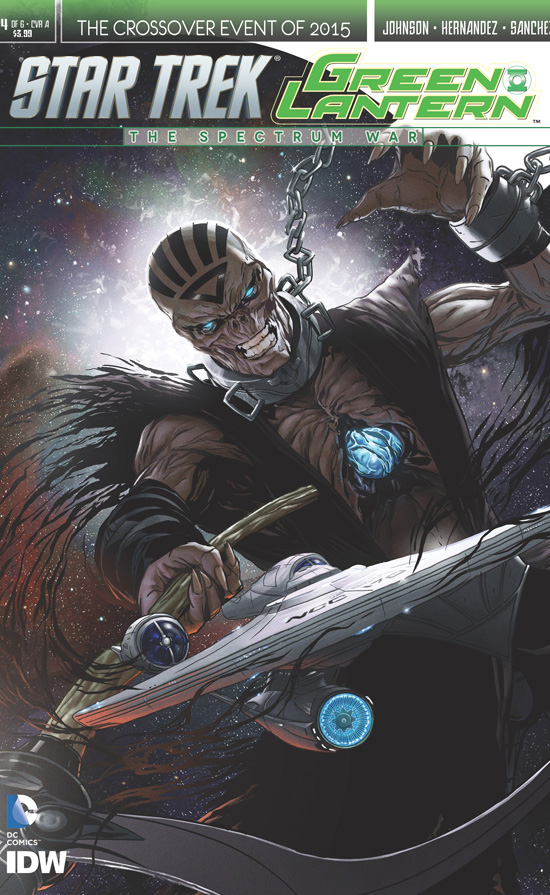 Another clever cross-over collaboration between IDW and DC Comics. This issue is the launch point for the assembly of Lanterns and the big confrontation with the obvious major villain: Nekron.

Essentially, the bulk of the story resembles the “Blackest Night” publishing event from a few years back. This time though, the crew of the Enterprise not only have rings of various colours of their own but the Enterprise itself is powered by the emotional spectrum. It was somewhat entertaining to see to see Hal Jordan and James T. Kirk acknowledge their similar character traits, but the real comedic tweak was seeing Carol Ferris declare Spock as her “handsome friend”, to the consternation of the nearby Lieutenant Uhura. 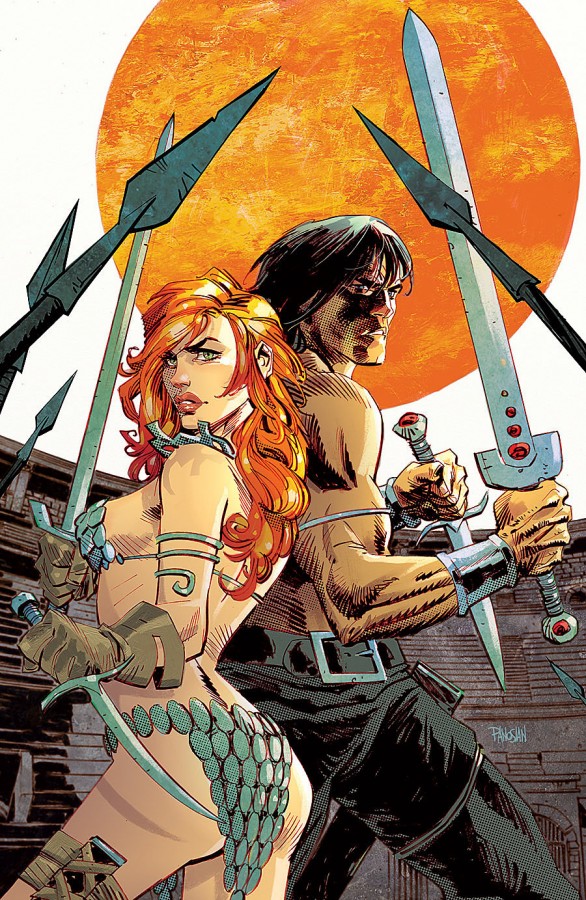 I’ve always been a Conan the Barbarian fan. As a pre-teen, I would devour Robert E. Howard’s books along with the Edgar Rice Burrough’s Mars and Venus series. It was epic fantasy and of course, Red Sonja became a fast favourite – as I grew older, of course!

But to see this team-up is always fun. I love the camaraderie, the mutual respect between two veteran warriors, and the love chemistry that hangs in the background between dramatic sword battles. Victor Gischler has captured this relationship perfectly – dialogue, expressions, and even their deprecating sense of good-natured mocking are really well done. Roberto Castro’s art is great and this is a really enjoyable series. The reveal of the surprise villain at the end of the book is a great and familiar twist for all true Conan fans. 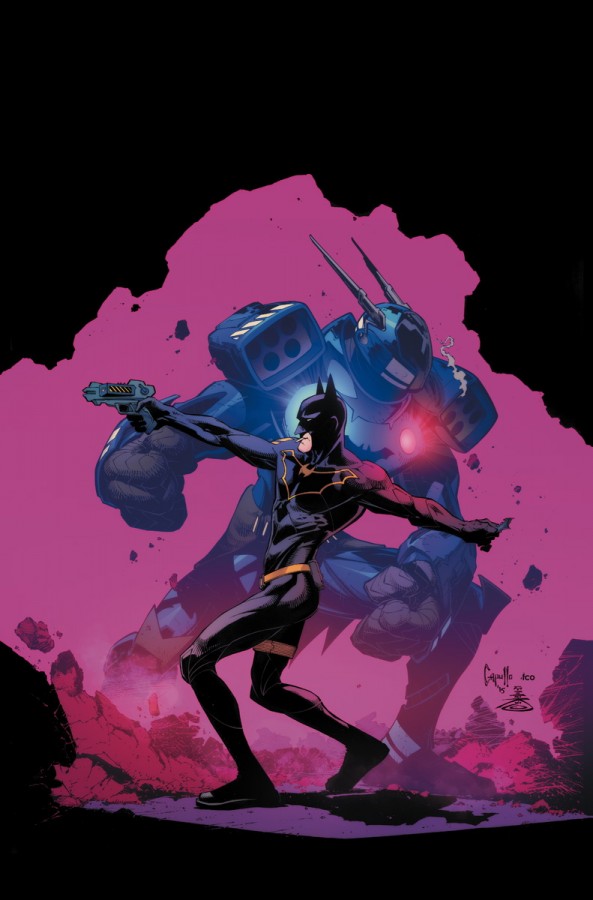 I love Greg Capullo’s art and Snyder’s interpretation of the Batman mythos has certainly captured my imagination. I’m intrigued to see more of how Bruce Wayne develops with his new psyche and Bloom is clearly a villain of a new order. While I can’t say I like Jim Gordon in his new persona, I’m going to go out on a limb here and declare that I have a feeling that the floodgates that prevent Bruce Wayne’s previous self from manifesting will eventually break and our original Batman will return. The question is: when?

In any event, do yourself a favour and get on the Snyder/Capullo bandwagon. It’s definitely worth the ride. 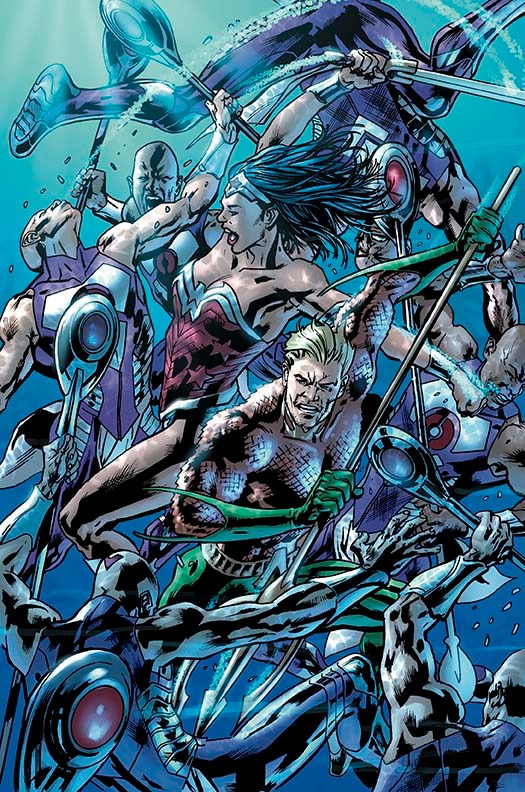 My interest level of Bryan Hitch’s book is rising – slowly, but I have to admit, it’s rising. With more information being revealed about Rao, this story is starting to take shape. Of course, it’s four issues in, which means if it takes four issues for the story to make more sense, then that’s three issues too long. Still, it is becoming more entertaining and I will be forced to say that I’m starting to enjoy it a bit more.

I still don’t like the New 52 style of characters, but it’s easier to handle now that DC has gone back to balancing the multiverse again instead of simply reducing their comics to just one. That makes this comic easier to accept as well. 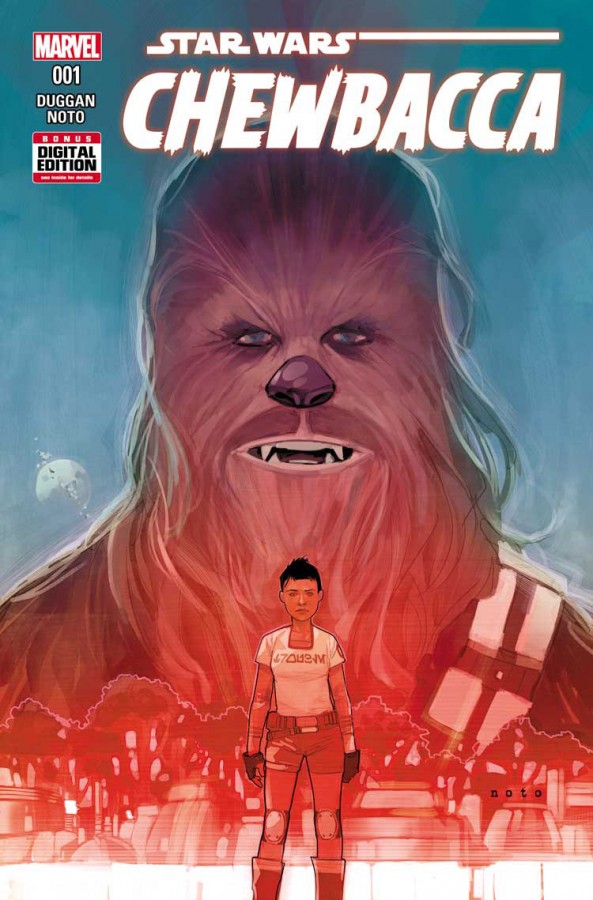 This was the first comic I reached for. Marvel has definitely hit all the right notes with managing this property. But this is the first one that didn’t wow me. Don’t get me wrong: it’s not like there’s anything wrong with it. I just found it fairly formulaic and …well, cutesy.

This story takes place immediately after the Battle of Yavin and Chewbacca has a personal mission to undertake back on his home planet of Kashyyk. However, his borrowed A-Wing fighter malfunctions and he winds up on a planet where there just happens to be a kid in need of his help.

Written by Gerry Duggan and drawn by Phil Noto, it’s a typical after-school special vein of story. Chewbacca is the strong, silent hero come to the rescue of a child whose family is enslaved. Like I said, it’s cute, but not on the same level of enjoyment as the previous Star Wars titles to date. 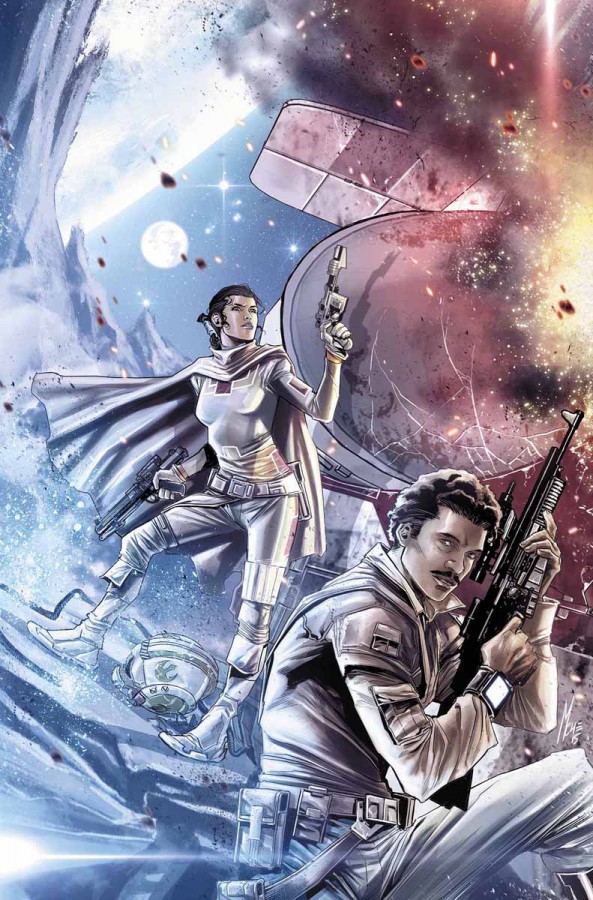 Jeez, I hate the length of this title. I get what they’re trying to do, but couldn’t someone in Marvel marketing come up with a more abbreviated one that’s easier to say?

Despite the elongated title – it’s Greg Rucka; I’d suffer any length of unwanted syllables to enjoy his work. What I stood out for me first was its level of action. This story has a real frenzied pace that’s very reminiscent of the films. I swear during one of the battle scenes (you know, when a tiny force has to defeat a seemingly insurmountable foe?) I could hear John Williams’ theme music in the background. If the comic can inspire that level authenticity, it’s good – it’s really good.

Set during the few days immediately after the Battle of Endor, when the rebellion is mopping up Imperial Remnants all across the galaxy. However, what’s really significant about this comic is that it’s a tale that’s told by other characters, assisted by occasional appearances by our familiar star warriors.

It’s a very clever approach and in a time where there’s plenty of story material. Drawn by Marco Checchetto and Angel Unzueta, the artwork is breathtakingly good at representing the likenesses of the original characters and the colours by Andres Mossa really capture the essence of the films.

Guardians of the Galaxy #1 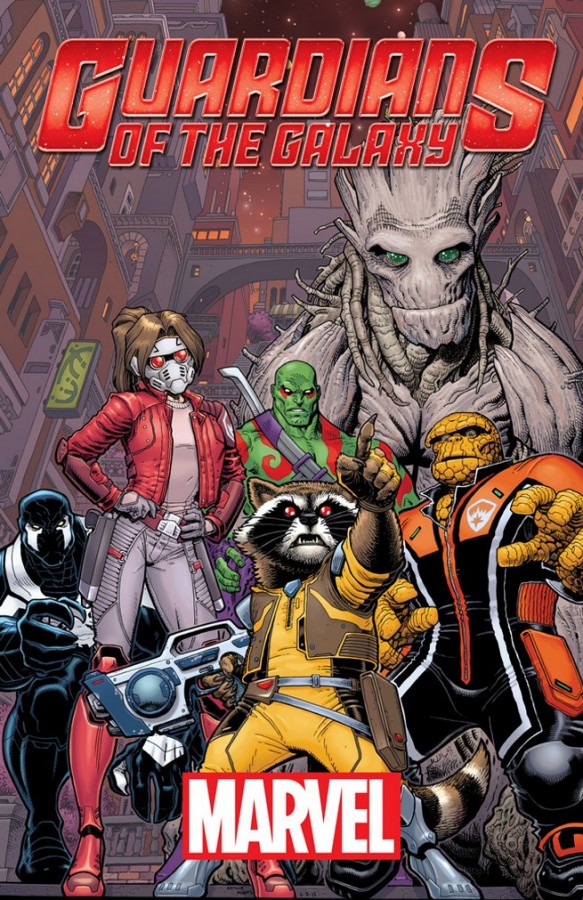 Kitty Pryde was my comic crush at the tender age of thirteen. To me, her memory is sacrosanct and any attempt to drive her from the X-Men shall be regarded by me as an act of defilement.

However, the Arthur Adams cover was a good enticement for to at least pick up the book. Arthur Adams knows how to draw mutants.

Of course, it’s the old Art Adams tease. Written by Brian Bendis and drawn by Valerio Schiti, I have to say that I don’t like Kitty Pryde as Star-Lord. Make her Star Lady or something that’s a little more Pryde-specific?

The dialogue was a bit cheesy, but Bendis is clearly trying to capture the same irreverence from the film and incorporate it into a new comic. So though I can’t fault his intention, I found it a little trite for my tastes. Schiti’s art was passably good but to be honest, I’d rather have Art Adams on the interiors.

Still, fairly decent adventure and the addition of the Thing to the roster is an admittedly good idea. 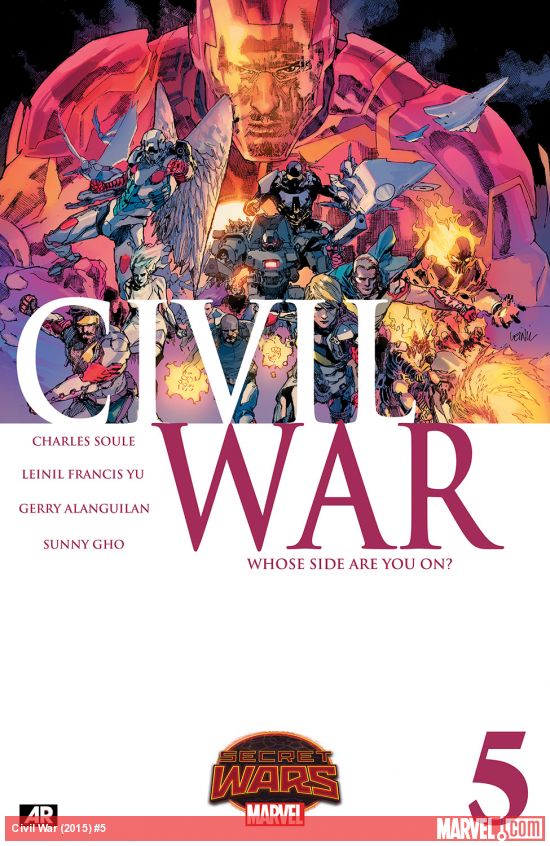 Great conclusion and definitely one of the few Battleworld comics that I’ve enjoyed out the Secret Wars reboot. Of course, what’s weird is that the whole event seems to have fizzled out. There isn’t any more hype or recognition of the event; it’s like the Battleworld stories seem to be independently concluding on their own like the last few flashes of a fireworks show. It’s a shame – it started with so much energy and now it’s losing momentum.

This was a fitting end to the Civil War and one that is acceptable for an other-worlds type of story – which all of these Battleworld books are.

And speaking of fitting ends, now it’s time to acknowledge the comic pick of the week. That honour has to go to:

There’s a real European vibe to this book’s art but with Greg Rucka at the helm – well, the guy is just a gifted writer. I like the fact that he’s incorporating other characters into his story as it adds something new to the canonical void that has now been created by Disney’s acquisition of the Star Wars property.

I’m going to have to come up with a nickname for the title though … too much to say.

Still, this is great Star Wars book and it just goes to show that despite my initial misgivings, Marvel is managing the franchise the best way it can. Clearly the company is enjoying great sales of it and by putting its A-level talent on the titles, its making it a favourite for both comic-lovers and Star Wars fans alike.

Now, of course, if only we could convince Rucka to leave Oregon and come to Toronto and join our talent pool …