Comics and sports are very similar with regards to the enthusiasts who follow them.

True. That’s why you see sporting memorabilia sold at the same events where comic collectors can be found obsessing over their “got-its” and “need-its” to fill the holes in their collections. Whether it’s trading cards or Walt Simonson’s run on Thor, both hobbies cause collectible mania in their respective enthusiasts and an appreciation for the various facts that surround the objects of their obsessions.

Let’s take a look at the line-up for this week. 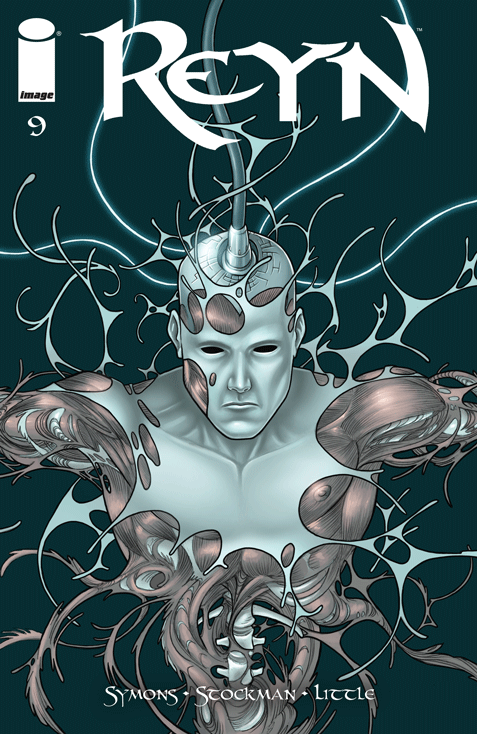 Brilliant comic but this was an episode short on dialogue and long on action. It also had a a one-shot reveal that was very much in flavour with the other ones in the series to date. It’s a good book, but the episodes are fairly simple in nature. It’s clearly coming to an end though as I can’t see too much more Kel Symons can do with the story. 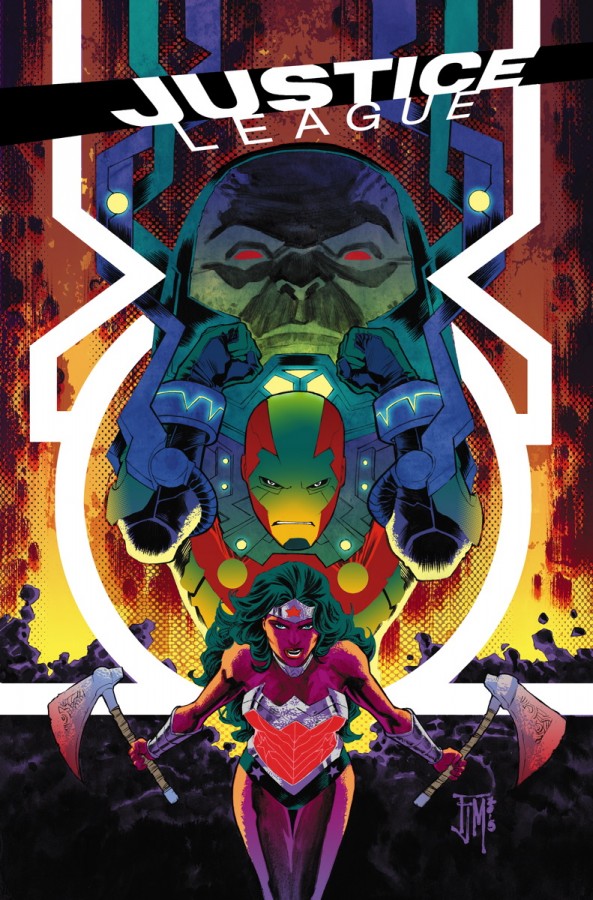 Spoiler alert: The Darkseid War (Part Five) is still in high gear with the death of Darkseid (sorry – that happened a month ago – long enough for spoilers to be included. Historically, I think Darkseid has been my favourite DC villain. He isn’t just a mastermind; Darkseid controls an entire planet. But he also has the physical presence of a super-villain with godlike super powers. He’s the total package and is worthy of any hero’s attention. He’s the epitome of absolute evil and power.

But this recent development pretty much negated all of that. The Anti-Monitor and Darkseid went toe to toe but it was Darkseid who came up short. Of course, what really bugged me is that the Justice League just became the embodiment of the NEW new gods of Apokolips and this issue was pretty much just a springboard for five separate other spin-off stories to examine their plight in separate stories.

I call cheap sales gimmick. Sorry – but I’m not going to be buying these. After all, if there’s a comic book about the Justice League – the assemblage of the greatest heroes the DC Universe has to offer, then I’ll read about them sharing enemies, combining talents and whatnot. If I want to read individual stories of their adventures, I’ll buy the appropriate hero-titled book.

Or maybe I’ll just wait for the hardcover. Yeah … that’ll teach them. 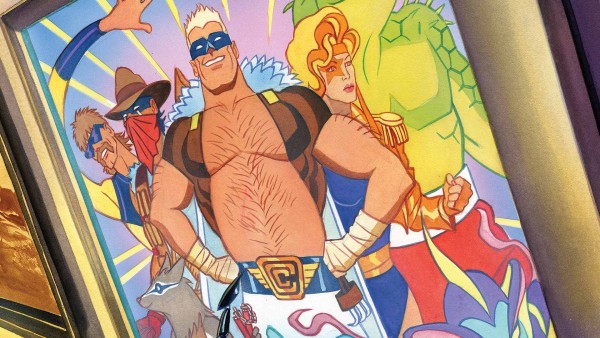 I’ve actually been getting steadily bored with this title in the last few issues. However, this issue redeemed the title for me. First of all, I’m incredibly impressed by Kurt Busiek’s ability to draw on an endless reservoir of superhero templates whenever he needs them. This issue saw a really good demonstration of his talent in fleshing out Wolf-Spider – the Australian member of Honour Guard – and his origins. A quick origin, a fast adventure and in the end, the hero even manages to have dinner with his mum. A somewhat formulaic but entertainingly well-packaged adventure.

But it was Gary Chaloner’s art that really caught my attention. It’s the first time I’ve been introduced to it and I have to say I was really impressed by it. After Ameri-Chiba, this was a much-needed improvement over the less-than-enjoyable art in the recent reads. I was ready to drop the title but after this one, I’ll stick around for a bit. 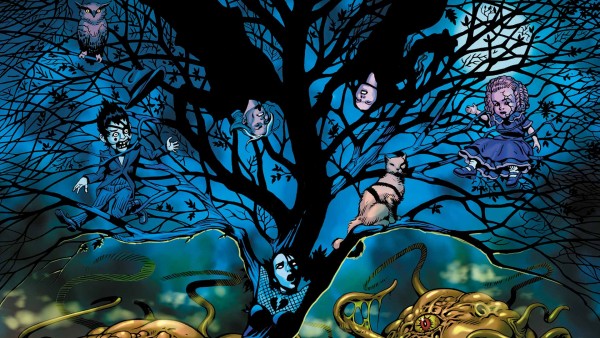 One of the new titles that DC offered in the last year. I was taken by surprise to learn that Ralph Dibney was the real name behind Big Shot. Though gail Simone is doing her best and there’s something very appealing about these misfits, I don’t think she’s managed to achieve a real sense of team symmetry with this group. They’re still struggling to find their way.

This issue though offered a start to a story arc that I was really interested in. An assemblage of all the world’s best arcane minds to solve a mystical problem that involves Black Alice, who Big Shot has taken under his wing. It’s a good start and I’m really curious to see how it plays out.

Of course, Dale Eaglesham’s art is always a draw for me. Why this guy isn’t drawing more stuff boggles my mind; it’s classic, it’s high-quality and it never fails to disappoint. 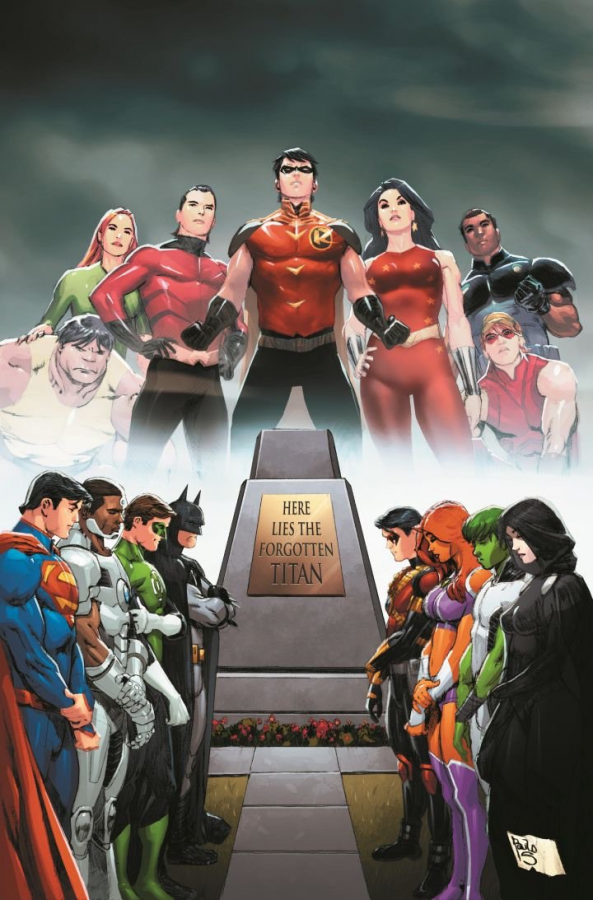 Straight out of Convergence – and in the New 52 universe (my most despised comic universe), I was definitely wondering where this title was heading.

I love the New Teen Titans – they are one of my best comic memories of the 1980’s. But this goes back to the Teen Titans who went before them- Robin, Speedy Gnnark, Lilith, Mal Duncan and Donna Troy who was just simply Wonder Girl. They were the Teen Titans that Nick Cardy started and ended up begin forgotten about in the 70’s before George Perez and Marv Wolfman resurrected them and added new characters to the roster.

I have to say this was probably the best intro to a comic title that I’ve read in a long time. Basically, this book is trying to reconcile all of those forgotten characters into some new ort of team. The formula seems very reminiscent of what Wolfman did with Raven and the new squad she put together, but mixed in with all the weird stuff that Convergence did to the DC universe, it really works. In fact, I’d venture to say that this might be the missing DC book I’m looking for to get really excited about.

Dan Abnett is writing the words and Paulo Siquiera and Geraldo Borges take the shared credit for the pretty striking artwork. This is a good book to keep an eye on. 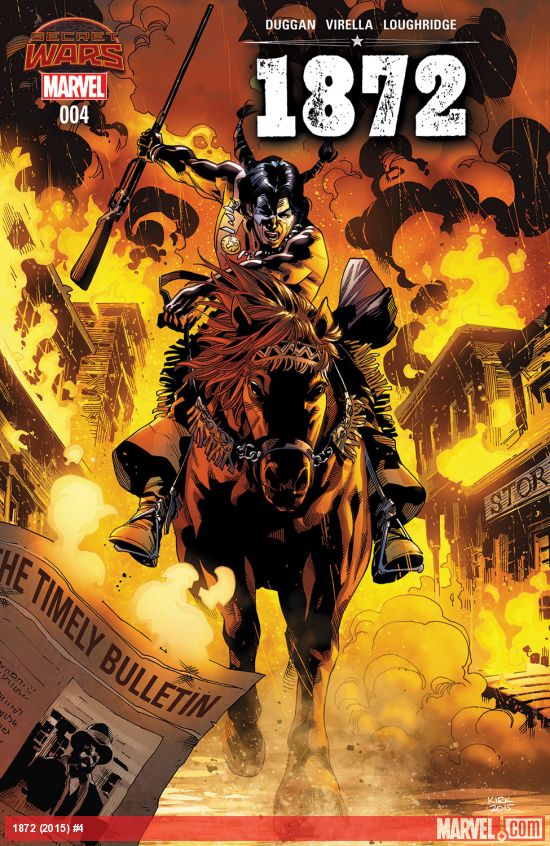 Wow … to see Iron Man ala Steam Punk is pretty cool. Red Wolf is a perfect main hero for this adventure and Leonard Kirk’s cover certainly has him down to a tee. From a story point of view, I don’t like the fact that Steve Rogers had to die in order for the townsfolk to rally themselves, but then I remembered the Western formula for a successful story: there has to be a sacrifice in order for the true heroes of the story to take up arms. Sure enough, this comic manages to accomplish that perfectly.

… There’s even a ride into the sunset with a blazoned epigraph that the Avengers of the West will return. Pure awesomeness. 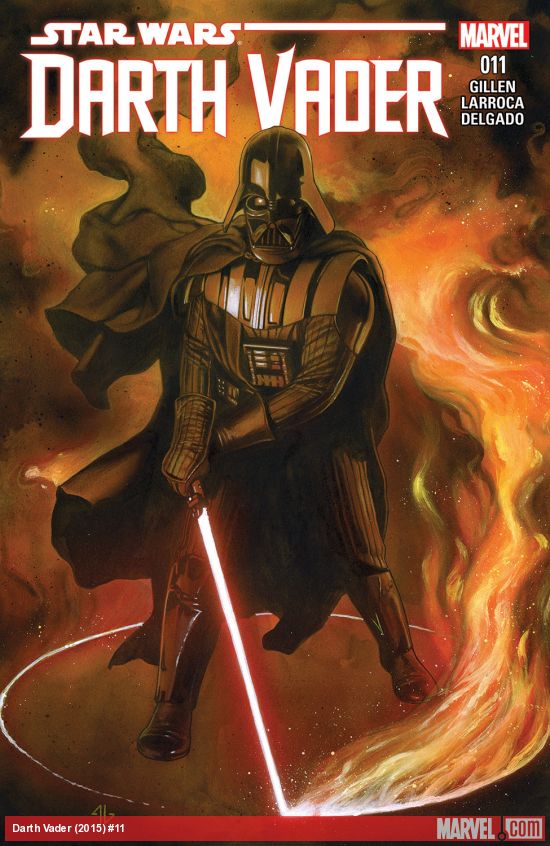 How long can they sustain this title? It’s incredibly entertaining as we see Darth Vader scheming and plotting, bucking for his former position of prestige with the Emperor. It has to end at some point because as we see from The Empire Strikes Back, he is already in charge of the Executor and has an army better than the collection of misanthropes he currently has to have as a crew.

I love it and for as long as it continues, I’m on board for the ride.

Loved every page of this. What’s really appealing about this series is that it features cameos of the most recognizable characters. It’s the story of the unknown rank-and-file Rebellion soldier that we never get to see because the story is always is about Han or Luke or whoever.

This is a story about the Rebellion; how it has to continue to fight because the remnants of the Empire refuse to surrender and the personal toll it takes on the lives of the people the Rebellion forces are trying to protect. It’s a more human drama perspective that brings the story down from its idealist heights which is refreshing as well as capturing the basic essence of the film’s original theme. 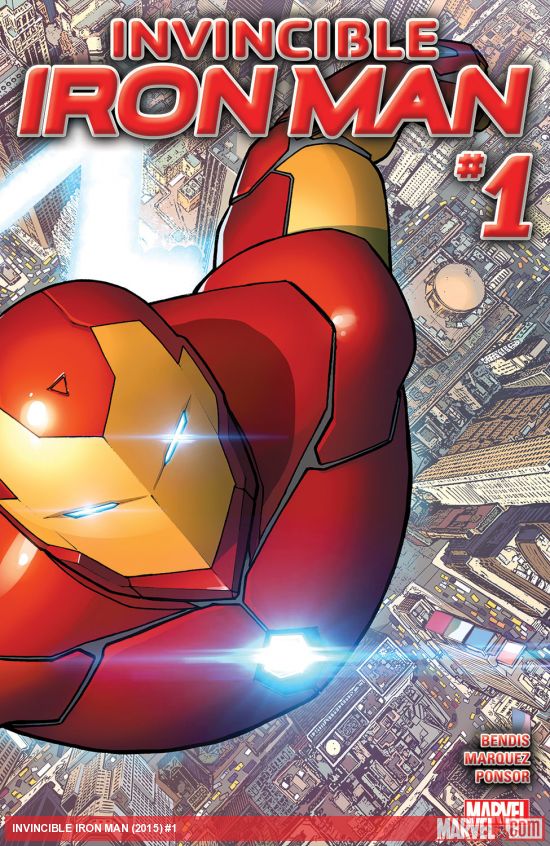 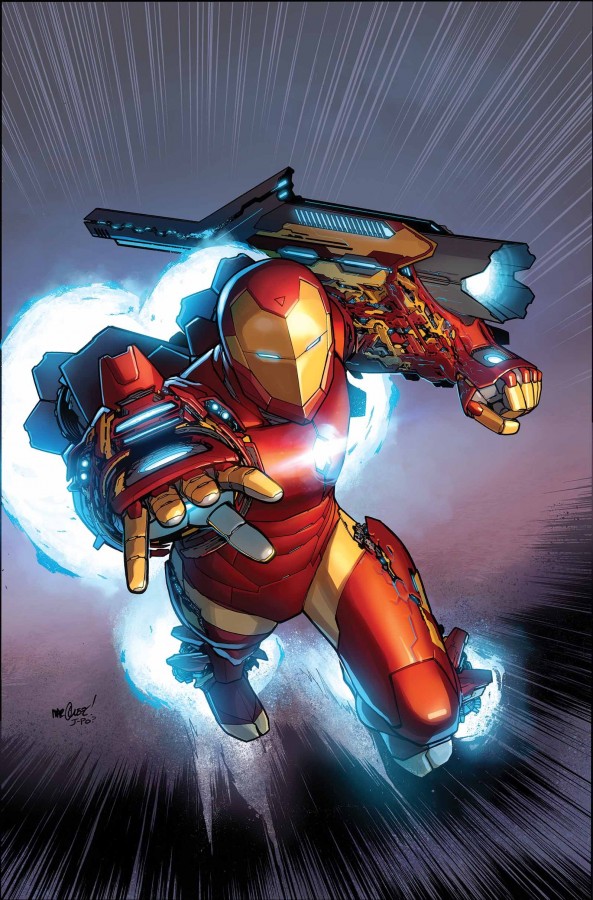 Missed this one when it came out, so I figured it was fair to include both issues in this week’s review.

I hate reboots upon reboots – I mean, Iron Man has been rebooted now at least three times as Marvel tries to keep up with the movie version of this character. However, this time, I think they got it right.

A simple explanation of his background and we see Stark in the middle of recalibrating his armour so that he can employ all modes of operation. He has an AI known as Friday and this is probably all you need to know to start enjoying this comic.

In fact, I’d have to say that this is probably the Iron Man comic that should have been in the comic shops five years ago – no disrespect to Matt Fraction. (Matt – if you’re reading, just bought your Deluxe Edition of Satellite Sam and still think your Iron Fist is the best version of that hero I’ve ever read – hugs?) But someone told me that this is a comic that a reader can enjoy without having to worry about all the prior knowledge that has to be had in order to understand a title. In this case, one page of information and Tony is ready to deal with Doctor Doom.

Oh yeah, Doctor Doom’s in this. Brian Bendis has done an awesome job with this bad guy. Hmm – hints of how Secret Wars end? Great pair of books – you have to start reading them. 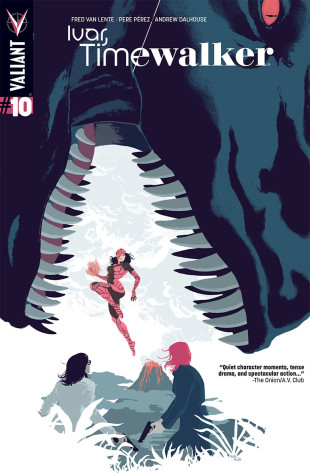 Valiant’s best title, I think. Fred Van Lente is a gifted writer and Pere Perez is doing a fantastic job of providing not only action-based sequences but true emotional scenes that really underscore the intensity of Van Lente’s dialogue. It’s a great book and definitely unique.

To be honest, I still have a hard time keeping the story’s continuum together – I think I’ve forgotten what Ivar and company are still trying to do; that’s the problem with time-travel. However, that’s what Hardcover editions are for, right?

So, who’s this week’s MVP? The honour has to go to:

I loved this comic. It had a respect for tradition, a unique perspective in introducing the forgotten heroes of the original Teen Titans, and it also had familiar elements (Lilith’s mysteriousness, Roy Harper’s addiction and Dick Grayson’s impulsiveness) that could be found in the 1970’s iteration of these heroes prior to their 1980’s smash re-invention of the group.

In fact, I’d venture to say that given the handicap of the environment that Abnett had to work in it’s truly a wonder that he could make those characters fit into the New 52. I just hope he can bring more of that success as the comic progresses and we can see more of this version of that Super Team.

… Oh, and the damn Super Friends and the purple monkey don’t show up. That’s a deal-breaker in my eyes.

Until next week. Make sure your comic bags are properly sealed and your ball gloves are well-stitched.