Life gets in the way of life. It’s a common thing for a lot of people, I think. There are those amongst us who drive themselves crazy trying to keep up with the many demands that our lives exact from us, while there are others who also push themselves to an unrealistic degree of excellence in the satisfaction of those demands.

Hey, I’m constantly trying to eke out time to write this column while satisfying the many other requirements of my hectic life. But somehow it gets done, and while it my not be the greatest job at times, at least the list is curated; the efforts of hard-working creators get recognized, appreciated and critically analyzed. That’s what counts.

We need to remember that we can’t be excellent all the time. Some days I surprise myself and write something that I take genuine pride in. But that couldn’t have happened unless the weekly effort is maintained. On the times when we are excellent, we need to not only appreciate those moments and remember that they couldn’t have happened unless we kept up that consistent struggle leading up to them. After all, I think Tom Wolfe said: What I write when I force myself is generally just as good as what I write when I feel inspired.

It’s the same with comic creators; they have good issues and they have bad issues. Some months are harder because of the limits of creativity and sometimes it’s just because life gets in the way, but the deadline gets met.

Let’s take a look at the list for this week and see what we can see this week. 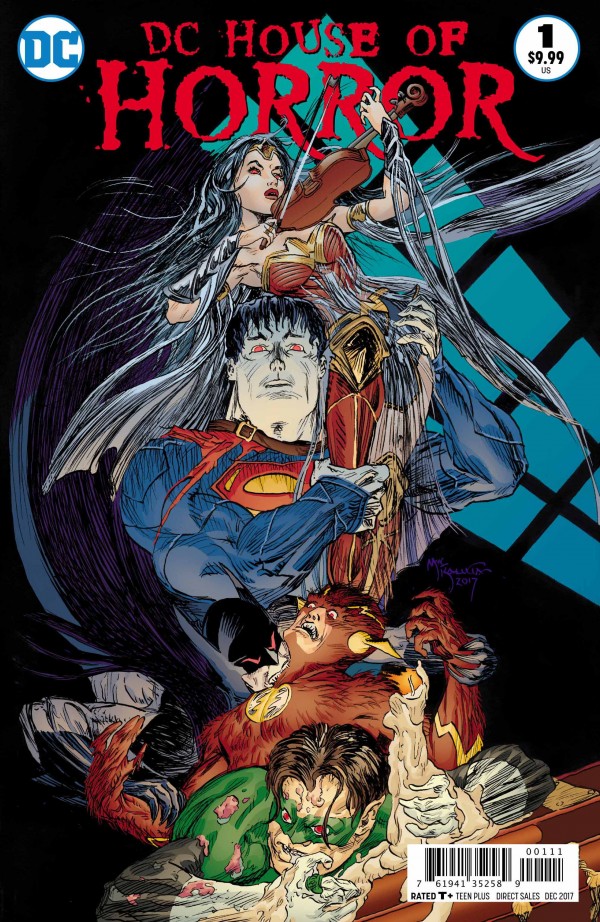 I almost typed House of Mystery, thinking back to the 1970’s-1980’s anthology-based book, and had to catch myself.

This is a bit of a pleasant surprise, albeit a relevant one leading up to Halloween. Imagine if aspects of the most prominent characters in DC literature were presented as tales of terror? Horrific origin stories, maleficent manifestations of evil and a warped and extreme perception of them as spine-chilling as any gruesome campfire story.

Huh … maybe I should be writing copy for DC.

In any event, this is a delightful treasury of eight horror stories revolving around Superman, Wonder Woman, Harley Quinn and others. Themes of zombie outbreaks, possession, insanity and alien invasion feature prolifically in this $9.99 collection of entertaining tales.

More than just the horror stories though, it also gives a variety of artists a chance to show their skill. The talents of Howard Chaykin, Dale Eaglesham, Rags Morales and Bilquis Evely among others are featured. The cover is book is drawn by Michael William Kaluta and coloured by my pal, Lovern Kindzierski. The plots are arranged by Keith Giffen and features the writing talents of notables like Brian Keene and Bryan Smith. It’s a true treasure trove of Halloween horror and definitely worth the price. 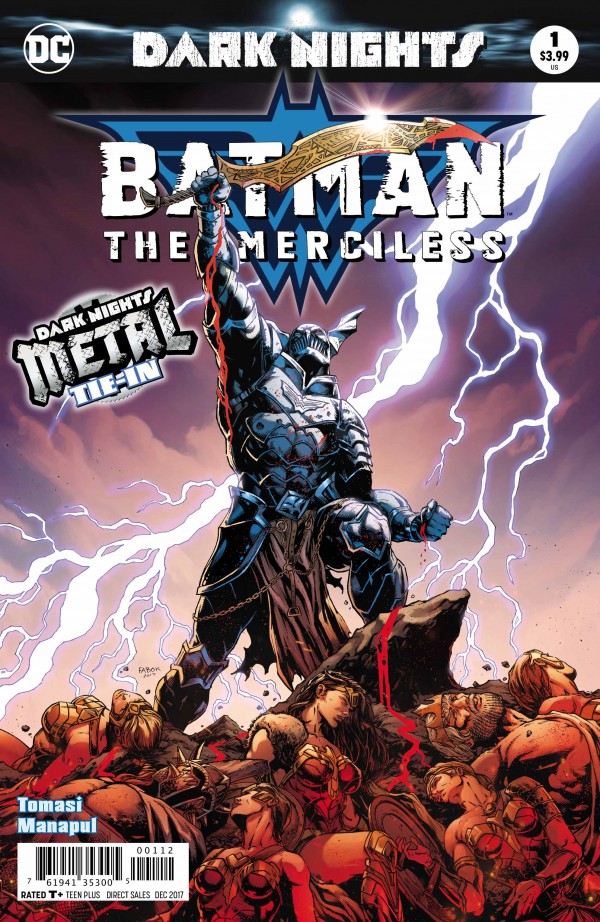 I can’t say I’m all too crazy about this series, but it’s eventually leading to something. It’s probably best to wait until the trade or hardcover compilation to be able to appreciate the story in its fullest magnitude. Right now, its episodic nature is just facets of a greater story that is probably best enjoyed in its totality. 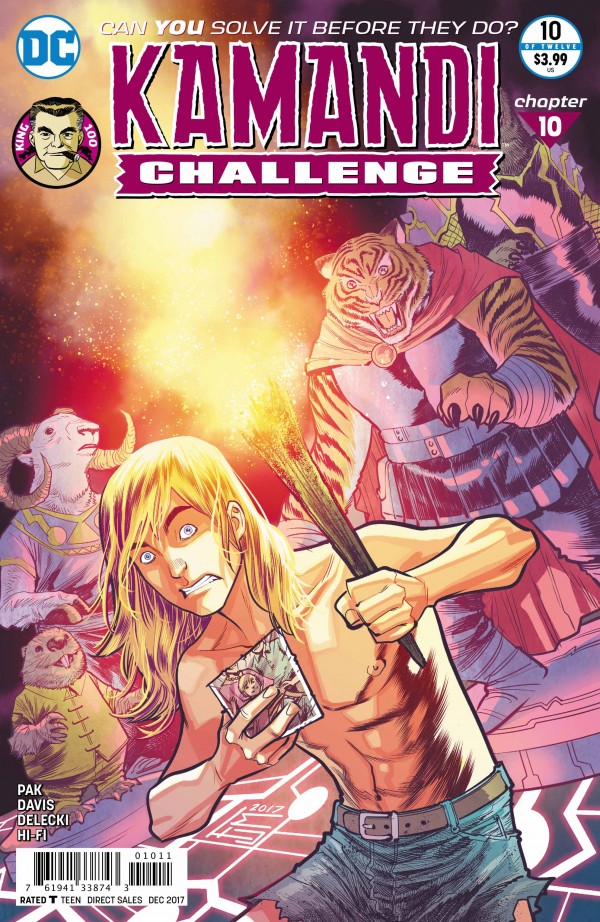 I’ve been waiting to see how (and who) the next issue would faire. We last left Kamandi outnumbered and worn down by robotic creatures who didn’t seem to have a purpose, save to whittle down Kamandi’s fellow prisoners until he was the last one. Now we get to understand what their nefarious purpose was.

Throw Kamandi into a dangerous story that doesn’t require an ending but has a great deal of complication and leave it to someone else to figure out! Beautiful! Greg Pak and Shane Davis have given us a fun-filled thrill-ride of a story that I’m should would delight even the King himself. Throughout all of these stories – well, most of them – I have gotten a real Jack Kirkby vibe of fantasy and that’s the mark of a successful issue. If any of the cavalcade of creators have managed to give the reader that feeling, then they paid true homage to Jack Kirby. 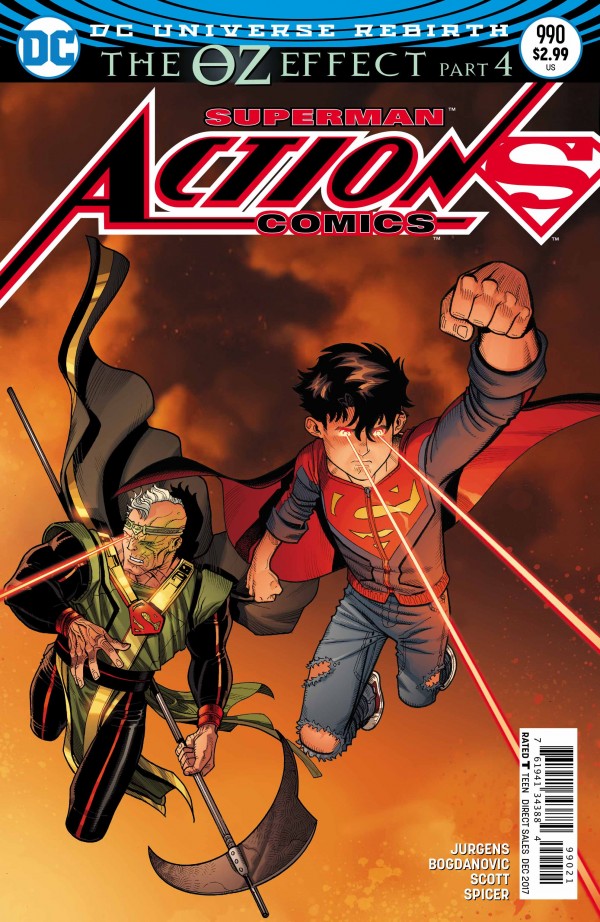 I have to give credit to Dan Jurgens for making me care about Jor-El again. The idea of resurrecting Jor-El and making Superman consider the chance that he may be alive is a bit far-fetched but so is the notion of a man flying under his own power around the world, halting global crises as they emerge. Sometimes we forget about what sort of a full-time job Superman has.

Life getting in the way is a good perspective to look at this story. I can see Jon Kent’s desire to know his grandfather as well as Kal-El’s hope that his father is still alive as a powerful motivating force; hell, even I want him to be real. If so, then I’m hoping that there will be some sort of a cathartic reaction on the part of Oz/Jor-El that Humanity IS worth saving. If not, then Superman is going to have to stop his father from doing what is clearly wrong – and that’s a family sadness on a global level.

Phew … I’m really caring about this book more than I thought I would. 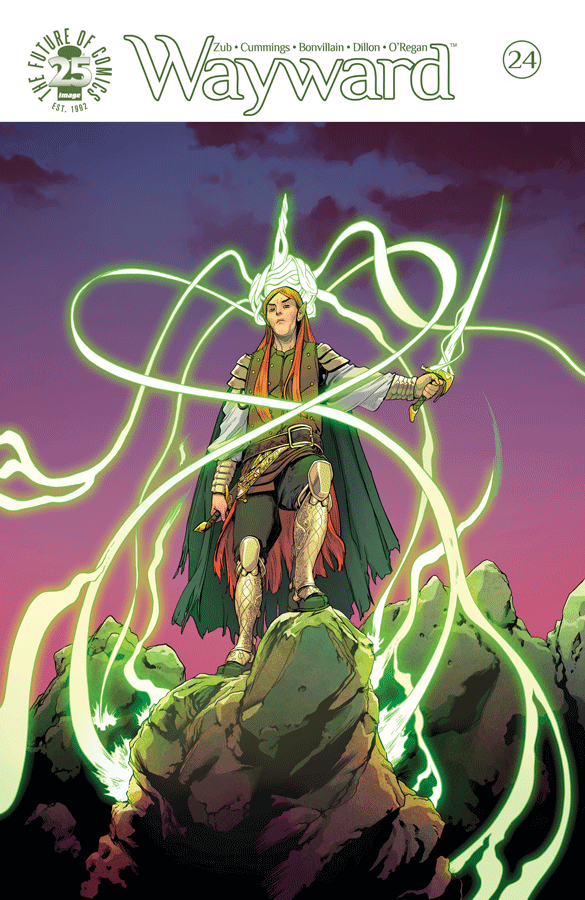 Jim Zub is a hard-working comic creator. I’ve spoken with him before about this title and I have to say, I love where it’s evolved to. The inclusion of Celtic Mythology in relation to the Japanese Mythos has made this a real treat for anyone who loves legends and lore. It’s interesting though, how the Yokai of the Japanese Mythos were originally perceived as the villains, intent on holding back the magic from the younger generation. Of course, we were told that about the Irish Tuatha Du Danan as well. Yet when we get to the land of Tir Na Nog, we meet with something quite different.

However, the overwhelming betrayal at the end of this story is something that really catches you by surprise. If you haven’t been following this series, I heartily recommend that you go to your local comic shop and pick it up. There is a Volume Hardcover and I’m sure the second volume is soon to follow. 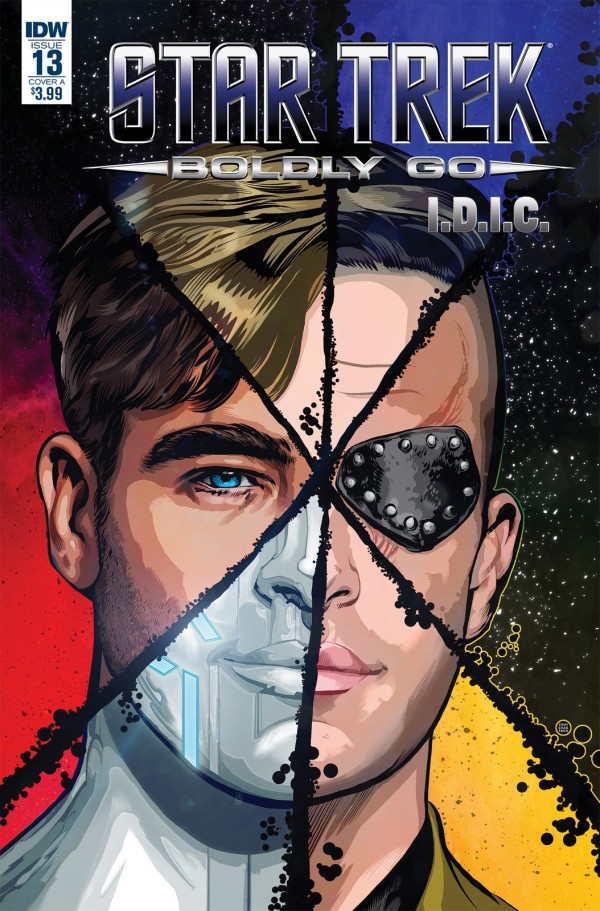 It’s a quick turnaround for this issue of Boldly Go, as we explore the Kelvin Timeline further.

Last week, I looked at Issue #12 and submitted two reviews on how much I enjoyed seeing Garth of Izar reveal himself in that issue. It was good to see more of the Prime Timeline appear in the Kelvin ‘verse, even though I didn’t feel like that storyline was developed enough.

Now we know why. Issue #13 is the first of a wider, six-issue arc, titled I.D.I.C., and it’s a complicated and varied storyline that holds a great deal of thoughtful promise and I’m sure that will completely take readers of the IDW comic license by surprise.

Long-time Star Trek fans will know that IDIC is the central tenet of Vulcan philosophy that means “infinite diversity in infinite combinations”, but in this story, veteran Trek comic writer, Mike Johnson takes it about ten steps further and amalgamates a number of Star Trek multiverses into one event.

For example, we begin the story with the Kelvin Timeline. The crew is beginning to consider reassembling after the destruction of the USS Enterprise and the approach of the construction of its replacement. This allows Spock to consider the notion of IDIC and that becomes the segue to yet another alternate timeline in which Spock’s humanity was rejected by his father’s culture, forcing him and his mother to live their lives on Earth, taking Amanda’s surname as his own and serving as Captain Pike’s first officer.

Kirk was rescued by Klingons, commanding the IKS Channoq and is a nefarious villain and hunted by Star Fleet. In the middle of an encounter, they experience a strange spatial anomaly which introduces all parties to yet another variation of James T. Kirk.

This is a storyline worth investigating and promises to be a thoroughly rich story. There are lots of possibilities in this one and we’ve only been introduced to two. This is what the Kelvin Timeline was supposed to do: augment instead of supplant the regular universe. I’m excited to see the variations on this theme that Johnson has in store for us.

Which is the reason for it being the Pick of the Week. Life gets in the way, but at the same time, it’s the variety of opportunities that life promises that also gives us joy. In the pursuit of so many pleasures, sometimes you have to slow down and just focus on the ones that you can achieve.