If there’s anything that teachers know, it’s that routine works. But every now and then, a little bit of change is not a bad thing to do.

So this week, I’m changing my format and instead of including a summary of all the comics I’ve read, I’m just going to choose one as my pick of the week.

You see, I had someone challenge my integrity as a reviewer this week and it made me consider the public perception of the way that I deliver my criticism. Am I being partial because I receive review copies of these work?

I appreciate the free copies but it’s all part and package of the review process. I used to feel that it’s important to say something about all the copies I received out of appreciation, and please forgive the angst-laden tone but as a result, I’ve decided upon this course as a more expedient option of reviewing everything. I’m trying to be more selective in my praise while avoiding disparaging a creator’s reputation and better presenting my integrity.

You see, teaching full time while also writing until the wee hours of the morning for the past three consecutive years and during a difficult time in my family’s lives takes its toll. It’s hard work. I love it … but it takes time and effort and it can be disheartening when someone takes a shot at your rep.

Here’s the list of books that I chose to read:

Doctor Strange and the Sorcerers Supreme #1

In any event, change is good. So let’s get to my choice out of the list above for my Pick of the Week: 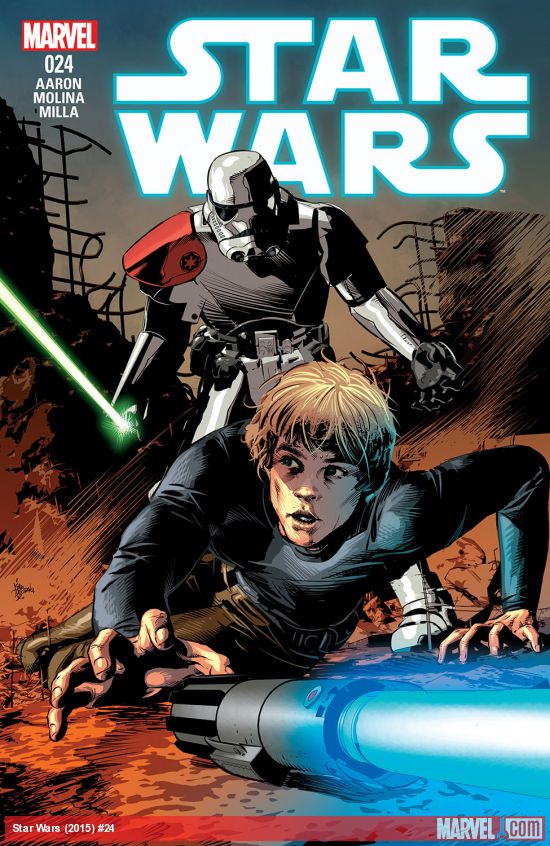 Well, the funny thing is, Star Wars is pretty much the best gun Marvel has got going for it in terms of a consistent draw. Recent market sales figures in July saw Star Wars #23 as its third ranking comic and that was after Issues #3 and #4 of Civil War II. There were a whole whack of DC titles in between those that had greater sales yields than any of the other Marvel titles as well.

So even though Civil War did better than Star Wars that month, the January sales figures show that it ranked fourth overall, with Secret Wars and Deadpool/Spider-Man coming in second and third respectively. However, in terms of story, there’s no doubting that it’s a far more superior story than any of its peers.

Jorges Molina’s art is solid and provides the necessary foundation for this incredible story to take off. His skill with spaceships and the different vehicles in Star Wars is definitely something to see and his combat sequences are definitely a lot of fun to look at.

Jason Aaron is a major talent and Marvel is lucky to have him on board. The guy has a history of creating memorable and relatable characters and that’s what he does for the cast of this legendary property. Of course, one might argue that he has a foundation of about forty years of established character recognition to build on, but remember when Marvel/Disney re-invented the established canon? Well, that took away that foundation and Aaron has had to develop a lot of the appeal of this book on his own. In fact, you can see his personal touches in characters like Dr. Aphra and her killer droids, who have fast become three of my favourite characters in this new version of the extended franchise.

Scar Squadron is another unique band of original creations that only add to the appeal of this franchise. Their distinctiveness and flair add another layer of adversity to the Rebellion and it’s definitely a measure of good balance to see villains so well fleshed out and detailed in counter-point to the heroes, who usually get all the attention.

But Aaron’s real strength is his imaginative scenarios in which these well-defined characters adapt to their situations and overcome their challenges. Just look at the way Leia and Solo scrap for command of the Harbinger as they decide to fly a skeleton-crewed Star Destroyer into an Imperial Base? It’s sheer mayhem and a hallmark of the reckless bravado that makes Star Wars such a flamboyant story of romantic daring. Aaron has the pulse of this property, that’s for sure.

But then wait for it … just as you think it can’t get any better, he throws a surprise ending at you. Not only does it take you unawares, but it perfectly fits into the canon of Star Wars seamlessly and gives the fans exactly what they want.

Definitely my favourite comic of the week and I love to give credit where credit is due.

Just sending that one out to the critic’s critic!