My pull list is a light one this week. With only one title from DC, four from Marvel and one from IDW, it makes me wonder what’s going on with DC.

My prejudice notwithstanding, what is it about DC Comics that sees them a poor second to the House of Marvel? Back in my formative years, DC had cosmic scale heroes that were so detached from reality that you had to read the comics as a true form of escapism. This was elevated fiction in that the imaginations of the DC creators worked overtime to manufacture stories that weren’t simply pulp but unique stories that deserved acclaim.

Yet there were few of them. It was hard to consistently create this level of super-heroic fiction so that perhaps explains why few of the DC super hero stories were winners. I mean, in the eighties, the New Teen Titans dominated sales figures, but it was the stories like Sandman, Swamp Thing, Hellblazer and such that really captured the hearts and minds of loyal DC readers.

Marvel took a different approach. The majority of their stories included down to earth, human-relations tales that readers could identify with. Spider-Man was a superhuman with the same problems as his fans.

We all know this. This is canonical comic history 101 but there are some differences now. With the arrival of the Marvel Cinematic Universe, it is the Marvel heroes that are on a cosmic level now and the DC heroes are perceived as more human with the success of their television shows. Yet the comic sales falter in comparison to their Marvel colleagues.

So what is going on with DC? No idea. I’d be interested in opinions. Leave them in the comments section at the end of the review. Let’s get to the list for this week. 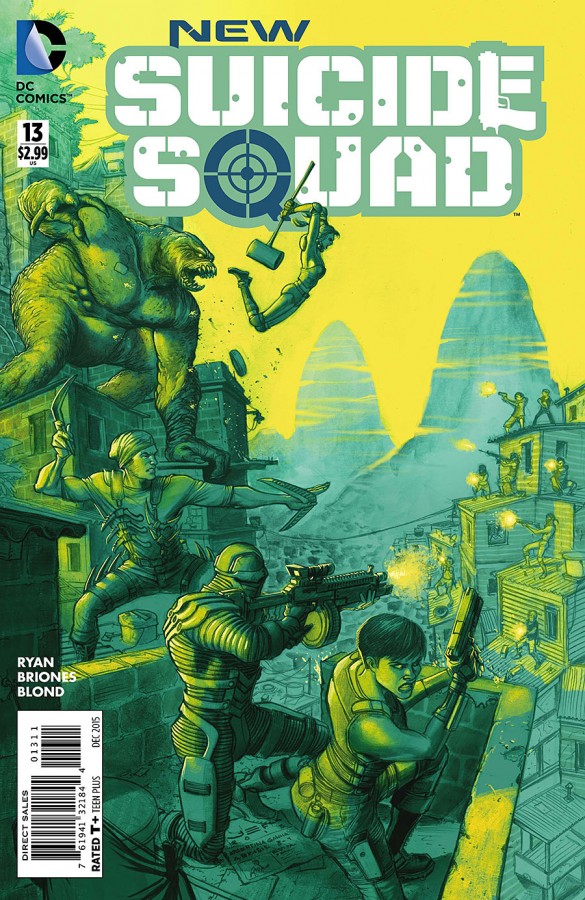 A new arc … and it’s awesome. Not only do we see some real character interaction by Sean Ryan, but we also see some serious possible long-term complications for our merry band of misfit anti-heroes. Phillipe Briones does a stand-up job with the art, but I have to say that Ryan is really paying attention to the background and prior history he has introduced. There is some serious promise with this arc and I look forward to exploring it some more in the future. 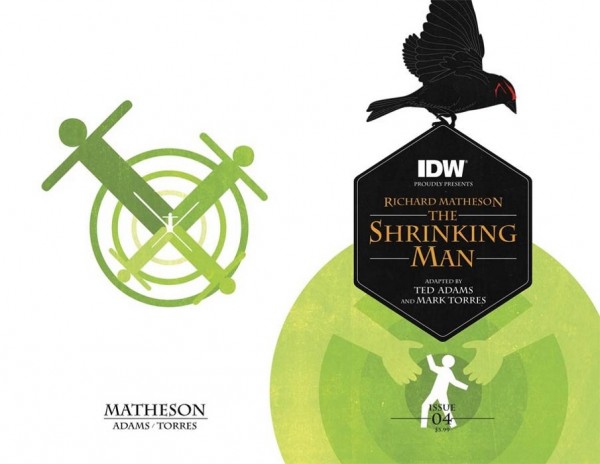 It’s the constant internalization of the Shrinking Man’s plight that constantly grates on me in reading this book. Yeah – you’re tiny and can’t have sex with your wife – we get it. Can we get back to the epic battle between man and spider? There are so many opportunities to indulge in the cool situation that poor Scott Carey finds himself in. Not cool for Scott, but face it: this is an adventure story and this book emphasizes his condition as a true disability and I’m sorry, but where’s the fun in that for readers? Just not impressed with this story at all. 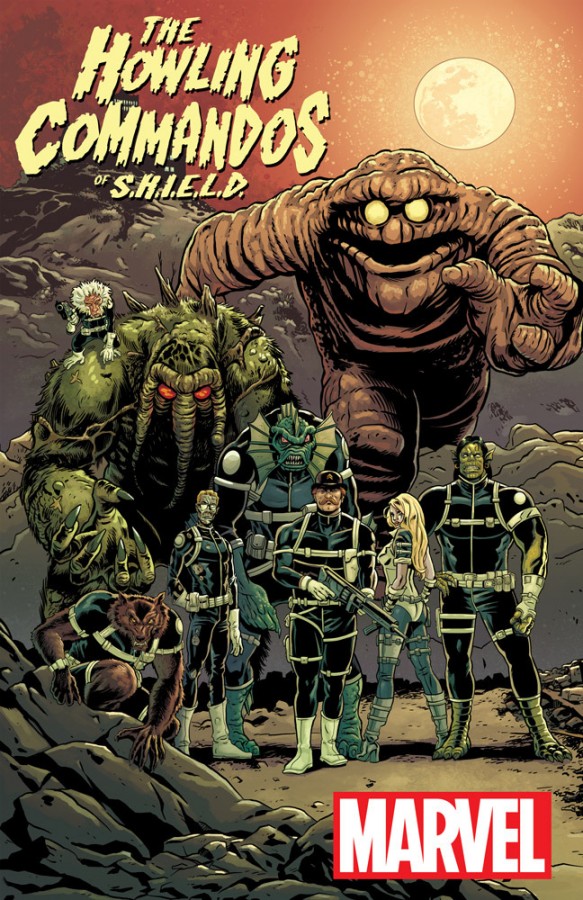 Wow, what a let-down. I’m sorry … I don’t mean to be such an immediate buzzkill but this was such a cheap-ass SHIELD version of the popular TV series Supernatural that I felt really ripped off. What’s worse, it took the name of one of the most venerated icons of Marvel’s history and turned it into a mockery. The idea is that SHIELD now has its own version of the “Creature Commandos”. Remember them from DC back in the late 70’s early 80’s? Written by Frank Barbiere and drawn by Brent Schoonover, I hope this is not representative of their best work. I can’t see this one surviving beyond issue #5. 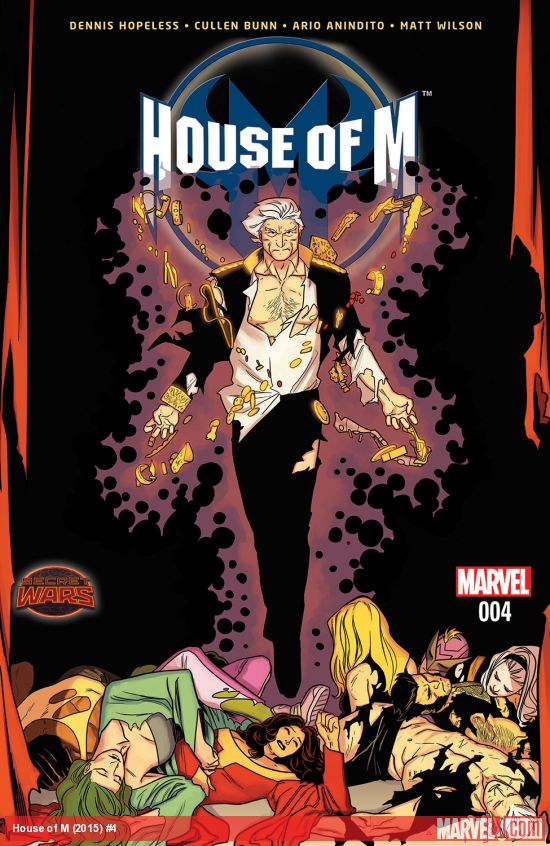 Okay, to be honest, I had completely forgotten about this book. For some reason, the grand publishing event for this quarter just seemed to fizzle out in my mind. There’s no real sense of permanence in my mind about the ramifications of this event, and I don’t think even Marvel has a specific idea about what direction the overall series is heading in.

Of course, this sense of general ambiguity seems to spill over into the ancillary books. I was actually disappointed with this title. This is the last one and it is very predictable and formulaic. It’s a poor testament to the original publishing event of over ten years ago. That was novel, inventive and had a permanent effect upon the landscape of the Marvel universe. This series has the same value as a publishing gimmick. 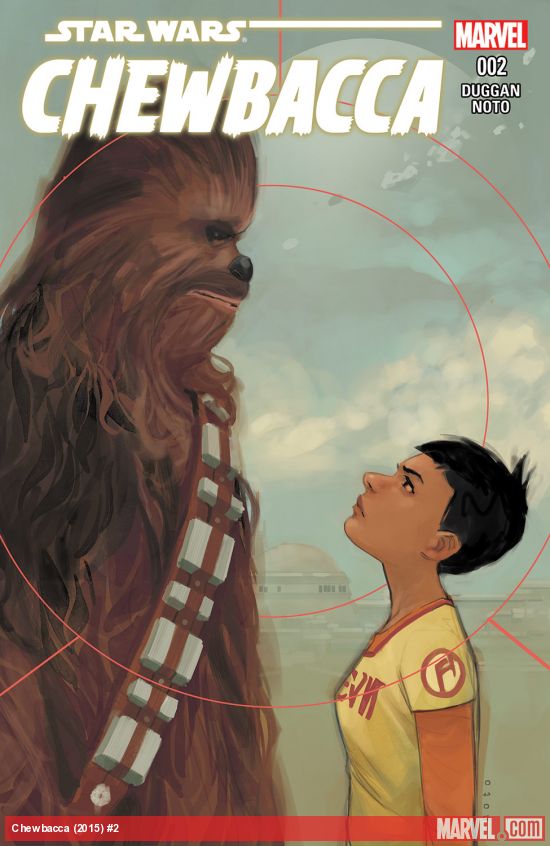 I tried to like this, but it’s really hard to carry dialogue when the main character doesn’t speak English – or Galactic Common – whatever. I do like that Gerry Duggan is tapping into that background of Chewbacca’s character, ie: the wookie enslavement by the Trandoshans as a prime motivation to help the kid in this story. However, it’s such a trite and formulaic story, I just can’t really get into it. It’s like the Star Wars equivalent of “My Bodyguard”. Anyone remember that movie back in the 1980’s with Chris Makepeace or am I just employing an out-of-date allusionary reference? 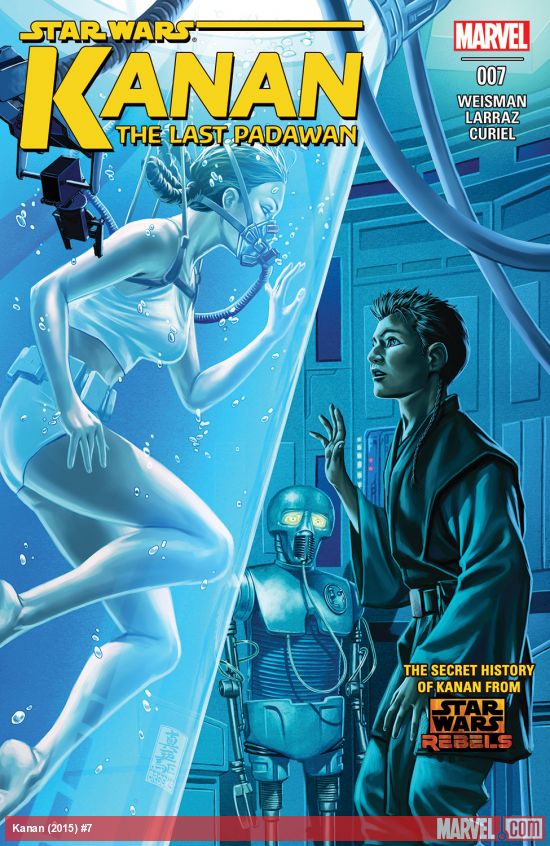 More Star Wars stuff. Marvel is really pushing the limits with their license. Of course, there’s an Obi-Wan and Anakin title coming out in the near future. I’m going to stop with Chewbacca, I think.

But I have enjoyed this title. I thought it was over, to be honest. After all, the original inception of the comic was to explain where Kanan from Star Wars: Rebels came from. Now the title has moved on to a more independent perspective with a new arc that looks more into Caleb Dunne’s (Kanan) instruction as a padawan.

It’s somewhat insightful but it’s more of an attempt to maintain the sales on this title. After all, who’s interested in looking back when the new Star Wars sequel is coming out? It’s a little cutesy for my tastes, but it does have some merit, if you value the appearance of Obi-Wan, Mace Windhu and Yoda.

So, the pick of the week leads us to:

I’m really pleased by this choice, actually because it gives me hope that DC can produce really good stories when it wants to. Though it may only be one title to Marvel’s four; it’s delivering quality over quantity.

Still, the question remains: What is DC doing these days? Make sure you comment after reading, and share your opinions. I mean, will DC pull this off next week? I’m genuinely curious to find out; I hope you are too.