In 1977, Star Wars gave us a perfect cinematic villain on a scale that hearkened back to the early days of film-making. The villains in the old Republic (Heh … just caught a pun there) serials were also rich in their menace. They had style and added to that, the nature of an intricate plan; the bad guys were not just something to entertain but they were also to be respected.

Star Wars #8 (Charles Soule, Ramon Rosanas, Rachelle Rosenberg, Clayton Cowles) gives us a villain that follows in that same tradition in the person of Commander Zahra. 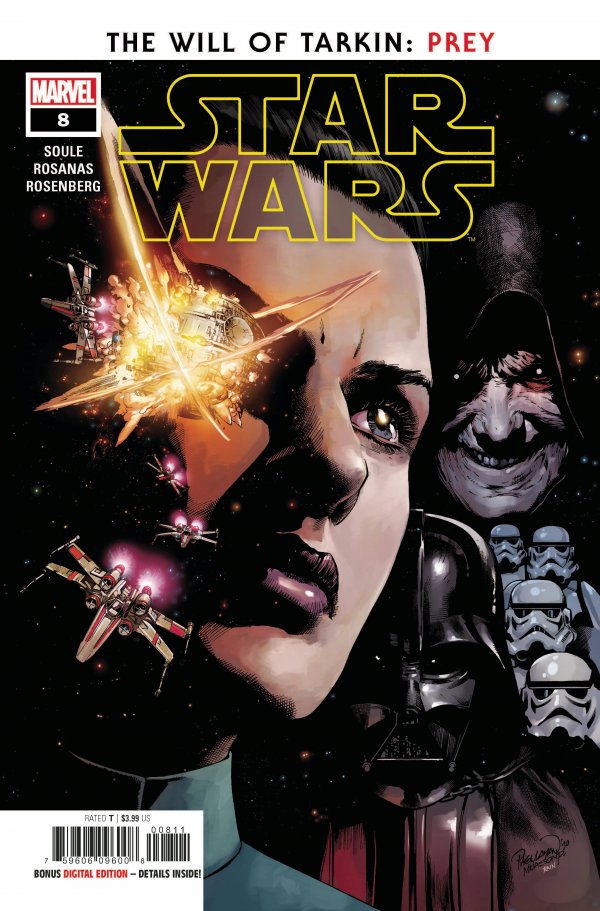 A devoted acolyte of Grand Moff Tarkin, we find Zahra posted to a backwater planet on a forgotten detail as punishment for failing her mentor. His death, after the destruction of the Death Star, is a permanent block to redeeming herself in his eyes, as we learned last issue.

Zahra is an excellent student. She has learned all of Tarkin’s methodology – as we learned in the previous issue – and failed in her last assignment given by him. However, Tarkin shared the existence of his protégé to Vader, who in turn no has shared this knowledge with his master, Emperor Palpatine. So, this means that now Vader will be free to continue his search for Luke Skywalker, leaving the task of hunting down the remnants of the escaped Hoth Rebel Fleet to someone at the same level of proficiency of a Grand Admiral Thrawn or a Grand Moff Tarkin.

I have to say, I was in total awe at the almost casual comparison Soule throws in there. It’s a subtle nod to the othermedia character of Thrawn that any fan of this franchise would know and love. As villains go, he’s probably my favourite. Of course, now that Thrawn has been in his own Marvel comic, then not only do we know what his capabilities are, but he has a greater degree of canonical acceptance. His mention, and Soule’s previous explorations of Tarkin, sets up a degree of expectations of enormous grandeur for Commander Zahra.

It could be the excellent decision-making in time setting that makes this book exciting. Placing the timing of this story immediately after Hoth, yet before the full events of The Empire Strikes Back shows us that there is not only enough room in this film franchise to establish an exciting story, but there is also enough substantive ancillary material. The failure of the prequels to establish themselves as thoroughly enjoyable – at least in my mind – was their desire to establish themselves as their own unique stories rather than as supportive to the films that justified their existence in the first place. To an extent, Episodes VII, VIII and IX tried to do that, but there was still a hubris that got in the way.

There is a resolute confidence in the way that Soule tells this story by paying due deference to Episode IV, but also by being respectful to setting up Episode V. Any fan of this franchise will immediately gravitate towards this story as not only being palatable, but canonical.

As a side note, I want to talk a little about the concept of canon here. Canon doesn’t necessarily mean a mindless devotion to the absolute historical details of a topic. One of my degrees is in History so when it comes to historical matters, then yes, canon is integral so that we have the absolute facts with which to make judgements.

Bu, when it comes to literature – and one of my other degrees is in English Literature – then canon applies to the soul of the story. It’s a subjective thing, but there has to be an abundance of evidence that supports the story material canonical. Many fans have problems with this because they are applying only their own perspective to the story and, sad to say, they aren’t the story creators – they’re just the audience, and the audience’s task in this continuing story is to simply observe and judge whether they like the story or not.

Zahra works as a healthy canonical addition for a number of reasons: first, she is Tarkin’s disciple and she is continuing his work. Second, she is known to both Vader and the Emperor as a worthy substitute for not just Tarkin but also Admiral Thrawn, a relatively new canonical addition himself. Also, Zahra doesn’t seek to supplant the story and take attention for herself; she just seeks to continue the story by filling in missing gaps immediately after the Rebel escape from Hoth. It’s a relatively narrow window of events, so, like I said, Soule has very cleverly chosen his moments to set this story and created a worthy character who is an ideal fit into the canon.

I’d be remiss if I didn’t comment on the scintillating artwork of Ramon Rosanas. When we are talking about canon, you can’t help but look at the level of likenesses of the main characters and in this respect, Rosanas does not disappoint. There are a number of artists who I regard as truly gifted in this regard, and I can say that Rosanas’s work has found itself into my personal pantheon of preferred picturalists.

It’s just not the physicality of the pencilling though, but the emotional intensity of expressions that stands out to me. Palpatine isn’t just twisted and scarred; he is visually emanating natural hatred. Zahra oozes disdain but immediately changes her body language and expression when she confronts Vader and her quarry. Luke has that special type of optimistic sense of adventure that we remember Mark Hamill sporting in all three of the Trilogy films. Coupled with Rachelle Rosenberg’s colouring, this book is a dazzling display of Star Wars adventure that every fan can get behind.

But for me, it’s always about the villain. Commander Zahra isn’t just a garden-variety “baddie’; she has a dark plan in mind for the rebels who humiliated her former teacher. “Tarkin’s Prey” is the title of this storyline and it is fully apt. Zahra has a plan in mind that is detailed, sinister and of such meticulous design that is one of dramatic proportions.

Like I said, I like my villains grandiose and dramatic, and that describes a true scion of Tarkin, in my mind.

Pick of the Week: Star Wars #8