We are living in a time of great opposition these days. By the time this article comes out, my friends in the States will be living in the aftermath of a great struggle. It’s my hope that there will be some learning, personal growth and a good story with a happy ending in that aftermath.

In the meantime, let’s get to some great stories in this week’s list. 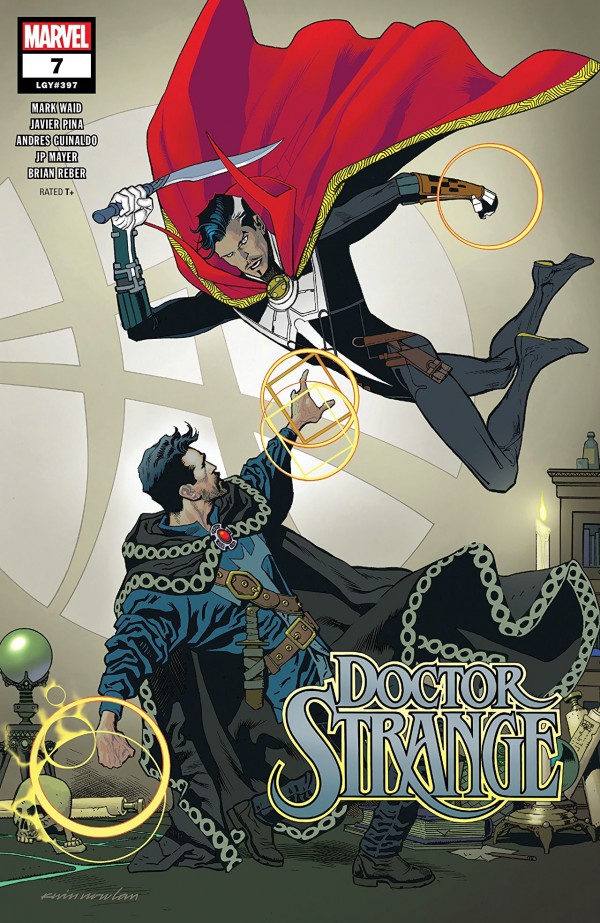 I like this reincarnation of Doctor Strange; we don’t see magical problems or dimensional threats to existence in this story, but we see a recognition of human fallibility that is fully capable of manifesting itself in extreme circumstances. It’s a real human adventure in that Strange is attempting to rectify the mistakes he made while Casey was his assistant. Her missing soul is at stake and the mysterious sorcerer who released her from imprisonment and set her out into the world disguised as Strange to wreak havoc is a veiled threat waiting in the shadows.

The opposition in this story is a hidden threat, but it’s one that’s worth the discovery when it’s revealed at the end of the book.

I like the relationships that Strange has in his life as well. Kanna and Bats are truly novel characters and their exotic friendship is not only something that readers can relate to but completely accept as the type of friends the good Doctor would associate with. 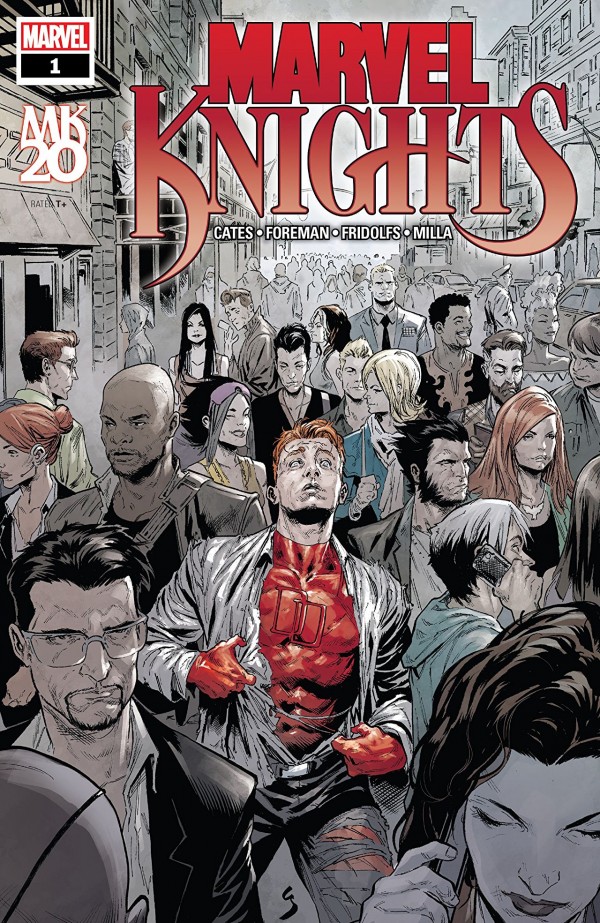 Whoa … I honestly read this with no expectations. With no expectations there is no oppositional preconceptions and I was stunned by the sheer daring of the premise. After all, when you play with established characters in the Marvel Universe and completely render them helpless and unaware of their own identities? This is a brave idea and of course, it has to be Donny Cates at the helm.

Cates has guts; it’s a hallmark of his writing style and it shows in his dialogue, and in this case, his character presentations. Rendering Frank castle in his new identity as a policeman is essentially repudiating a great deal of what the Punisher stands for in his fight against crime. The Punisher believes in no limits when hunting down criminals; a police officer has rules that must be followed.

This issue focuses on Daredevil’s “awakening” and trying to learn who he is. There is some game afoot here when we see that nobody knows him and he can barely remember any details about his life. With no friends, no identity, and a mysterious enemy behind all of this … devilry, this is a book that needs to be followed.

Great fun. No opposition here in adding it to my pull list. 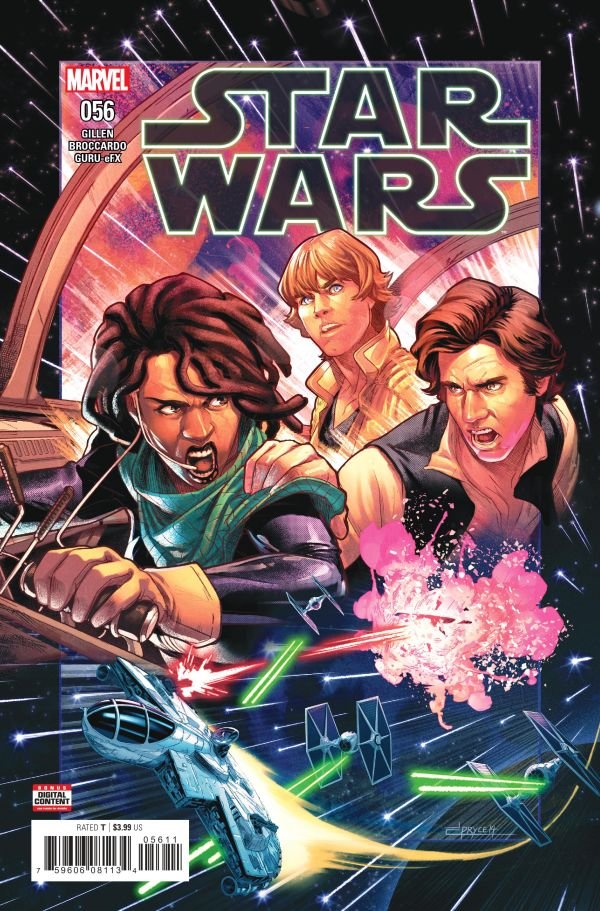 Part One of “The Escape”, Star Wars continues the untold stories of the opposition the Rebellion continues against Imperial Forces between Episodes IV and V. Told by Keiron Gillen and Andrea Broccardo, this is another promise of a great story. It’s good to be at the start of these things.

It’s great to see a time when Han, Luke and Leia were all friends together. In this issue they’re trying to escape the pursuing forces of the Empire who are on the look-out for them as wanted criminals. Seeing them personally bond together during this start of an adventure is a refreshing view. It reinforces their personal connections and reminds the casual Star Wars fan of how important they were to each other. It’s a background perspective of their relationship and as we have lost two of the fictional trio and one in real life, it’s also a reminder of how legends can’t really die. 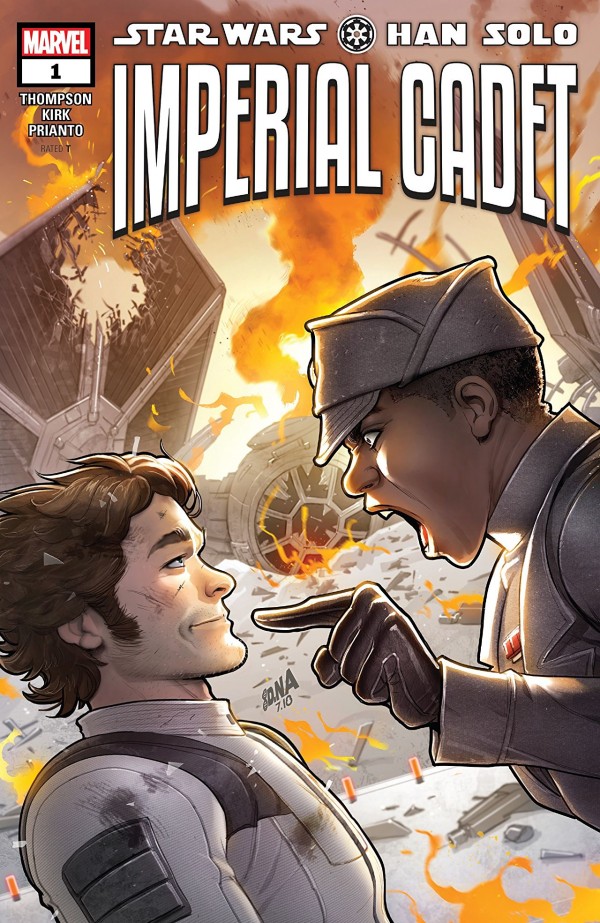 Yeah, ever since the film, I’ve been increasingly curious about more of Solo’s background. In stories like the Alan Dean Foster books of the late 70’s or the earlier Marvel Star Wars comics, Solo’s days in the Imperial Academy were only alluded to, so it’s great to see talented creators like Robbie Thompson and Leonard Kirk get to work on this aspect of this great franchise.

As expected, nothing but fun.

A young Han Solo is still a Solo I want to be like. After all, when I was growing up, everyone had a crush on Leia; Luke was everyone’s hero, but damn it, Han Solo was the cool that everyone tried to copy. It’s a great thing to learn where that came from, and Kirk and Thompson are going beyond the film to give us more of an idea as to where this came from.

I’ve always been a Leonard Kirk fan. I mean, ever since his days on Captain Britain and MI-13, I have followed this guy’s career with extreme happiness. Now he gets to draw a young Solo’s characteristic smirk and damn my eyes, he does it well. Kirk’s style is perfectly suited for this book. Not only does he excel in action but his characters radiate the attitude you want to see in them. 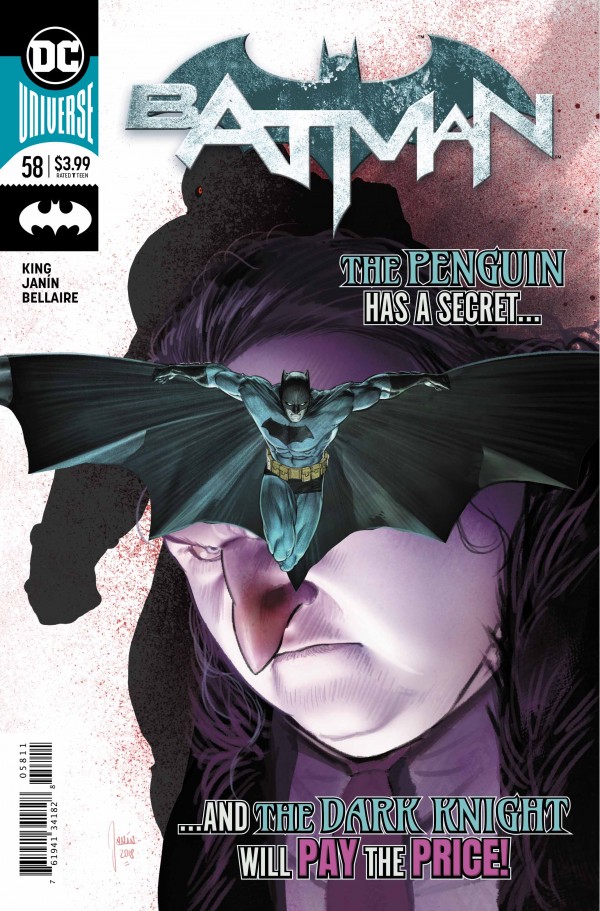 The Penguin is back and while he may be the most comical of Batman’s perennial villains, he definitely is not the one to be underestimated in this beginning issue of the arc titled “The Tyrant Wing”.

The title of this arc is definitely misleading as the start of the story sees Penguin incarcerated back in Arkham for a short visit with Bane. You see, there’s a wonderful fight sequence in this story that is accompanied by an excerpt from Shakespeare’s “The Phoenix and the Turtle”, which is an allegorical poem about two mismatched creatures in love, namely a phoenix and a turtledove.

The Tyrant Wing is also an allegorical miscue delightfully designed to allow the reader to believe it has something to do with Penguin’s stay in Arkham, but as the events of the story unfold, it is clear that Bane and the Waddling Warbird have more shadowy aspirations waiting in the …uh, wings.

Sorry. If there’s anything that describes a mastery of opposing characters, it’s this story. The Penguin is more than a nemesis for the Batman, he is a twisted caricature of him. Stunted, disfigured, callous and cold-blooded, Oswald Cobblepot may have enough wealth to nearly match Bruce Wayne, but he is definitely the opposite of him in so many ways.

Tom King and Mikel Janin have a definite chemistry. I’ve enjoyed their collaborations the most but it’s the glorious fight sequence on the 17th page, set to Penguin’s recitation of the above-mentioned poem that decidedly take your breath away. It’s a wonderful sequence and I’d kill to have the original pages. 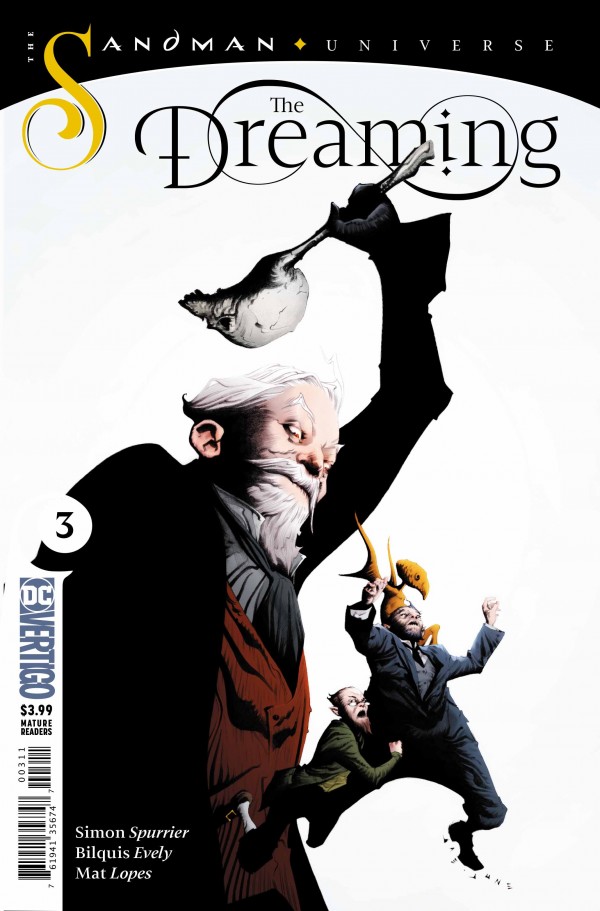 In the vacuum of authority, opposition to the natural order grows stronger. This, too, is an axiomatic fact of the universe. When the Dreaming’s rulership is vacated by the Lord of the Dreams, it is up to Lucien, his loyal steward and librarian to somehow manage the kingdom of dreams by himself.

However, that is a task for which he is greatly unsuited for.

This is felt by Mervyn, who we saw releasing one of the chief nightmare calamities, the dreaded Judge Gallows out of a sense that the kingdom is fraying and that Lucien’s withholding the truth of Morpheus’s absence was an error in judgement. Mervyn, of course, is a self-described working stiff. He doesn’t know how to run the kingdom; he just knows that it’s in trouble and he’ll take any avenue of success he can get, even if it’s an authoritarian nightmare like Gallows.

Maybe … maybe not. It might be coincidence, but lack of care of the state is a real theme of opposition for many. Those who don’t know what to do often choose the wrong course of action, like inviting a ruthless, power-hungry egocentric like Judge Gallows to run things.

Gallows reveals himself all too easily. While he tells Lucien that he is only here to advise and provide counsel. He advises Lucien to rest and sleep. In the meantime, Gallows tours the kingdom to get sense of what he will be clearly trying to rule.

The foreshadowing from the last issue is enough to convey that Lucien is being set up. It’s a classic double-cross story and the incredible art of Bilquis Evely alone is enough to make this a captivating book. But it’s Si Spurrier’s gifted dialogue that truly portrays Judge Gallows as a masterful and conniving entity who not only deserves our respect but also our fear that sells this book for me. The language is so evocative and convincing that I honestly can feel the grip of visceral fear in the land of dreams.

Imagine: the kingdom of dreams in the grips of a powerful nightmare.

Hmm … that’s something to oppose, I think.

But, with hope, all things are possible. Fans of this franchise have to believe that the kingdom will be saved, the rightful ruler will take his place and there will be a joyous victory at the end of this story.

I hope I’m not being too obscure here.