It’s a fandom-filled review list this week as we explore comic representations of some of the greatest franchises to entertain fans in the last fifty to sixty years! Of course, we’re talking about the viscerally nostalgic impact of Warhammer followed up by a double-punch combination of Star Wars and Star Trek! 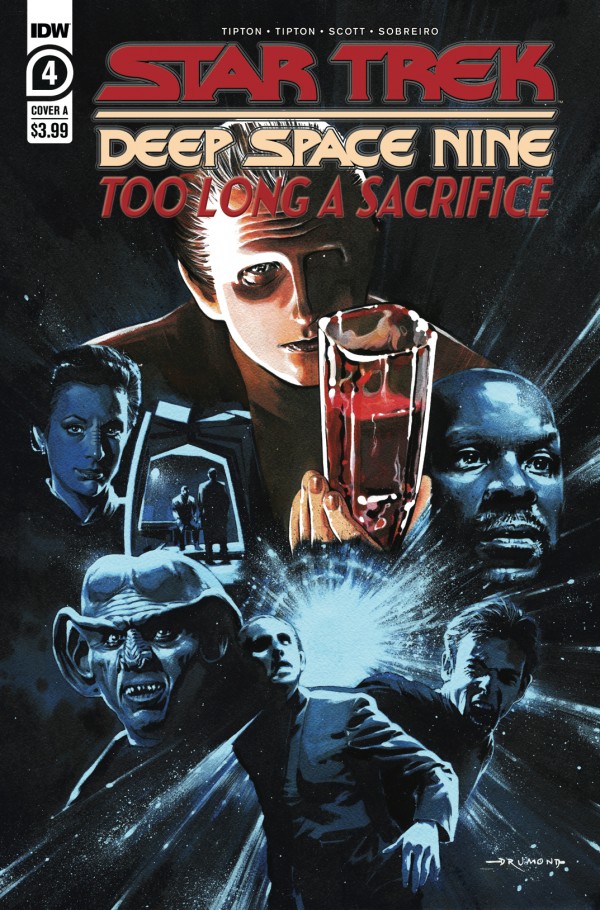 This is the culminating issue of this murder mystery and Constable Odo and the Betazed investigator, Retlaw, join forces to discover the identity of the assassin on board the station.

What I like about this story is the fact that it’s not about the characters but rather the history of the station. DS9, as fans of the series would know, is an abandoned Cardassian mining station that served as both facility and command presence during the occupation of the planet, Bajor.

The Bajorans and the Cardassians have a history unique to the franchise in that they were the only planet petitioning for membership in the Federation that came out of a military conflict with one of the Federation adversaries. Military occupation makes for many stories, but Scott and David Tipton effectively intersperse themes of a typical crime noir story in with the poignant themes of a military occupation.

Wartime hatreds run deep, and they come to the surface with an angry vengeance in postwar days. Of course, Odo was in charge of station security during the occupation and remained a constant with the transition of the Cardassian transition to the Federation’s administration of the station for Bajor. The Changeling character is not just a reminder of those days, but in the series was also a target of that animosity. While that dynamic isn’t present in this story, it is still hinted at and that shows the Tiptons’ mastery of lore in this iteration of Trek.

Greg Scott’s work is dark and definitely lends itself to setting the mood for this Star Trek “whodunnit”. Trek comics are always a delight and this one is no exception. 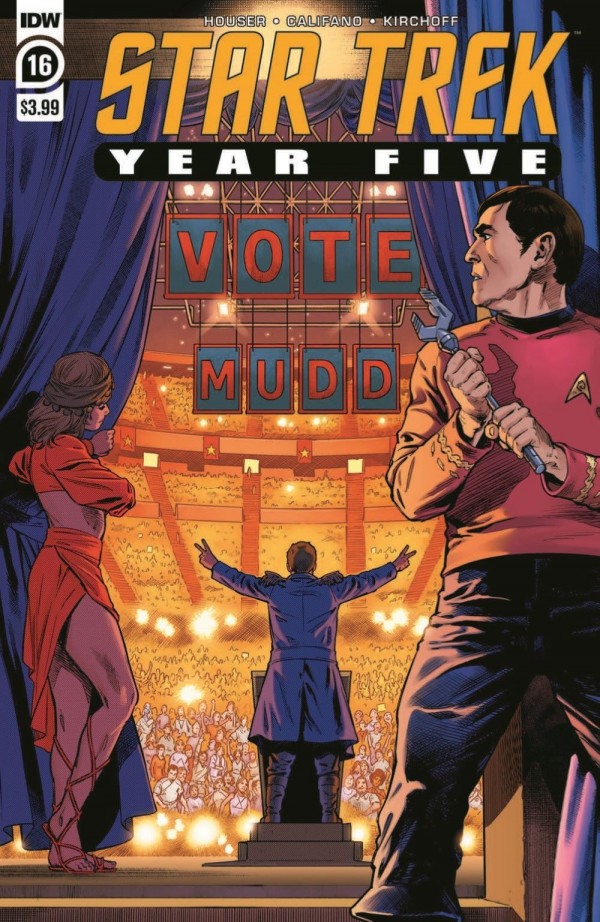 On the heels of one controversial election, Jody Houser and Silvia Califano bring us another!

Last issue, the election for the President of the Federation was up for grabs. Areel Shaw, former attorney-turned-politician asked her friend, James Kirk, to look into the nature of a new political party on Andoria called the Originalists. A conservative, reactionary group that valued the notion of primacy of the founding races of the Federation over expansion and inclusion of new member planets, the Originalists offered their own candidate for the position. To everyone’s surprise, it turned out to be none other than Harcourt Fenton Mudd.

I can’t say I was sold on this storyline. I think the spectre of the recent American election had us all a little stressed out and the mention of another controversial candidate who clearly wasn’t fit for the job was probably a little triggering – at least, in my case, and I’m Canadian!

But, this seemed to be too serious a topic for the antics of Mudd to be involved in. Mudd is a comic relief, and hearkening back to William Shatner’s “Get a life” sketch and knowing it’s just a comic, Mudd and a serious political-themed story just don’t seem to work well together. With the inclusion of a much more serious villain lurking in the background, I’m ready for another story.

However, there’s never any complaint about Silvia Califano’s artwork. It’s always sharp and I have to admire the way that Mudd resembles Rainn Wilson, who, of course, we know plays Mudd in Star Trek: Discovery. It makes the TOS era of Trek more relevant and up to date.

Of course, then there’s the colouration of Charlie Kirchoff, who posted this video about his recent work on this book on Twitter:

I think that speaks for itself.

However, I love how TOS is still relevant and fanworthy to the legions of Trekkies who adhere to its fundamentalism. It speaks volumes about its longevity, and that’s something to celebrate, in my mind. 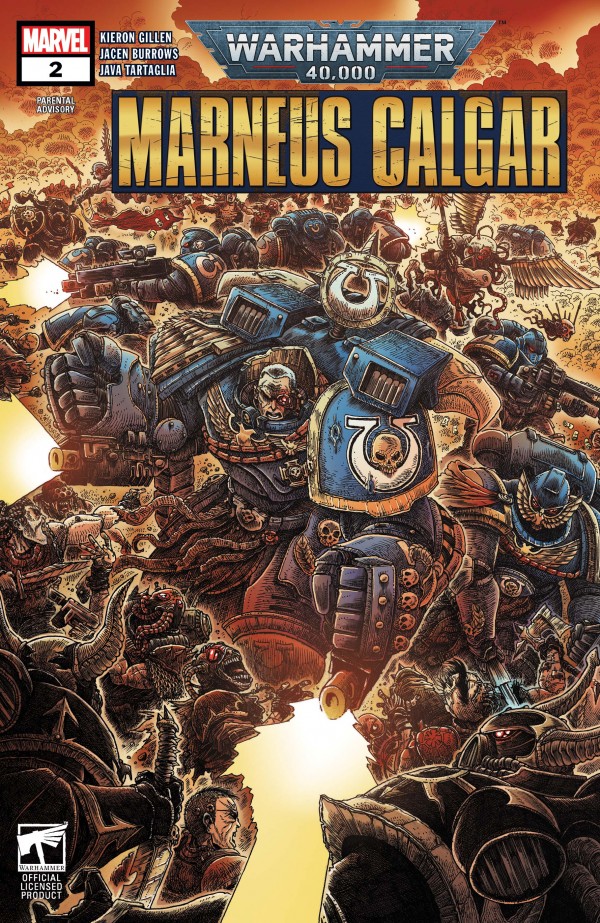 Last issue definitely caught my eye, as Warhammer was one of my fandom addictions back in the day. I loved collecting and styling the miniatures (and still have them today!) and playing long drawn-out battles with other like-minded collectors. It was a fandom, like these others that I could lose myself in.

Kieron Gillen shares this love too. His amalgamation of the franchise history into the framework of this story really provides a boltgun blast of nostalgic joy as we follow the exploits of the chapter leader of the faction of Imperial forces known as the Ultramarines. To any loyal fan of this universe, the Ultramarines well-known and one of the most common armies to collect and play with.

However, it’s more of the backstory of Marneus Calgar that really tests the mettle of the heart of any loyal son of the Imperium, which I have to say, I completely love. When I would play this game, my most valuable army pieces would take on backstories of their own and while Warhammer 40k wasn’t a roleplaying game, my mind would create origin stories and motivations based on whatever victories they managed to achieve on the battlefield.

Of course, Jacen Burrows is never a bad choice for me. After all, I have original art from this talented guy and his work never fails to entertain me.

This is a great book – and a great choice for Marvel to add to its repertoire of Franchise expertise. 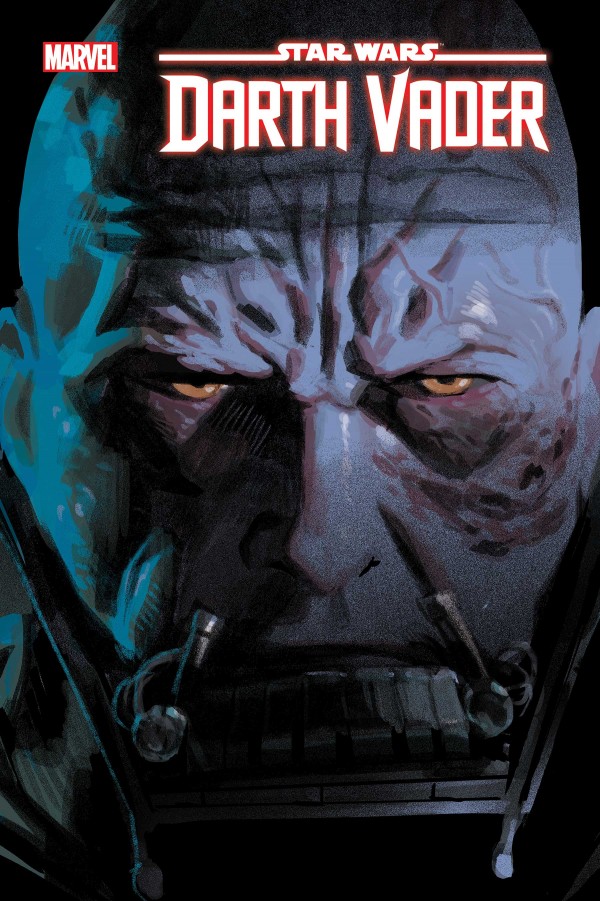 The humbling of such a great villain like Darth Vader is a story that just can’t be ignored. Writer Greg Pak brings us this view of Darth Vader that not only entertains but gives us greater insight into the complicated make-up of the man who was supposed to bring balance to the Force and only brought heartbreak instead.

Despised by his master for his weakness, crippled and left for dead on the lava shores of Mustafar – the source of Vader’s origins, with a Sith Assassin at his heels, Vader shows that even in a weakened state, he is no prey.

Of course, that’s what fans want to see. Vader wouldn’t be Vader if it wasn’t for the inventiveness and resilience of Anakin Skywalker. What struck me the most about this story is how much Greg Pak reached back into the fabric of this character. Last issue, Palpatine left Vader without legs and one of his arms – just as he had found him at the end of Episode III. This is a test, of course, and one that Palpatine forces upon his disciple to teach him that for all his abilities, his power over the Force, he is no longer Anakin Skywalker but Darth Vader and the Emperor’s instrument.

Raffaele Ienco’s art captures this intensity but Neeraj Menon’s colours both give the fires of Mustafar a fiery vibrancy and the tortured sadness of Skywalker’s memories back to life. It’s a great combination of talent that renders a true visualization that definitely adds to the enjoyment of appreciating this particular part of such a magnificent villain’s background.

However, Vader also learns that he still has much to learn. With the Sith Assassin on his heels – so to speak (you’ll get what I mean when you read the book), Vader discovers a secret on Mustafar that reveals that he can still uncover secrets that will hold some sort of promise. What that promise is will have to wait until next issue!

It’s that joy of discovery that keeps me and will keep other fans wanting to know more! Pak definitely has Vader’s measure and knows how to present him to a fan-rich audience who can appreciate the richness of his background. Comics add so much value to any sort of franchise and these comics are perfect examples of this notion.

These books are a perfect combination but Star Wars: Darth Vader #7 is definitely the type of story that will entertain fans and it’s my pick of the week for this review!

Give your inner fanboy/girl a treat and indulge in these fandom favourites this week!