I ask myself this almost every morning: what is the most important thing I will do today? In that regard, I’m setting myself up for telling a story, and one that I hope will end well by the end of the day. We all have importance in our everyday adventures. Whether we are significant to ourselves or to those who are around us, well, that’s up to us to discover. So, imagine when the first comic I read this week has exactly that type of theme in its story.

Star Trek: Voyager – Seven’s Reckoning #1 (Dave Baker, Angel Hernandez, Ronda Pattison, Chase Marotz) is the comic of the week for this review. Let’s take a closer look at why. 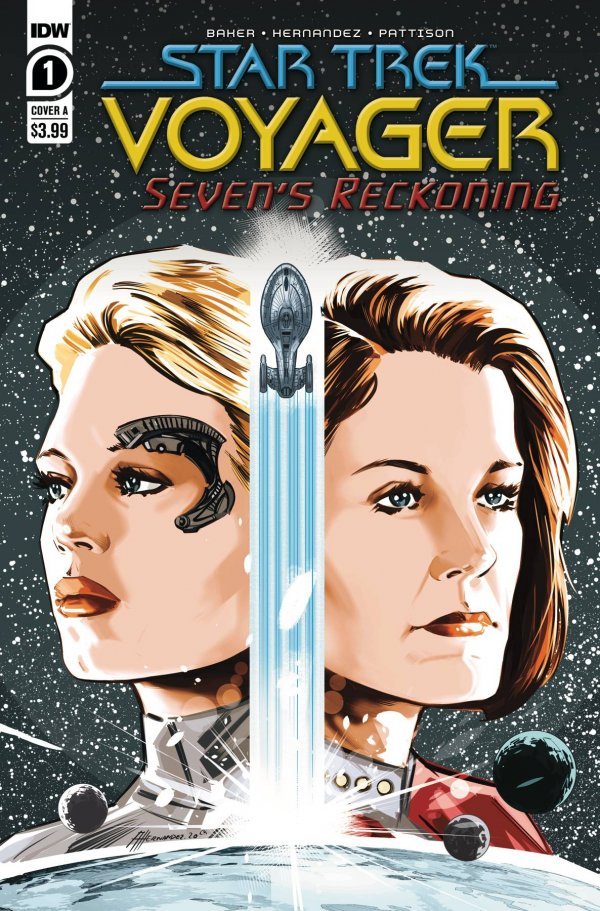 First off: it’s a Voyager story. As much as I am enjoying the devoted attention IDW gives to Star Trek titles, I’ve always felt that this iteration never got the full love in comic book format that it deserved. In its second half, Voyager contributed so much to the lore of Star Trek, like the Borg, Species 8472, the Delta Quadrant overall and boasted what was probably the best final episode in a series ever. Whatever its flaws, Voyager made a lasting impression in the hearts of Star Trek fans everywhere.

Of course, I think that its improvements were heralded with the introduction of the character, Seven of Nine, which of course, as you can tell from the title, is on whom this story is centred. This takes place around the time when Seven was a recent arrival to the Voyager crew. Janeway’s hairstyle has changed from the Victorian bob she had in the initial seasons and Kes is nowhere to be seen.

Seven plays an integral role in this fairly meaty story as the crew of the Voyager encounter a drifting colony ship of a species known as the Ohrdi’Nadar. As the ship is on limited power and requires assistance.

The Ohrdi’Nadar are a caste-driven species with a firm authoritarian ruling system. Each member of society has its place and its own story to tell in its collective narrative experience. The way they perceive their society is rigidly fixed and is the structure for their society. Telling falsehoods, alternative narratives are among their greatest crimes. Similar to the Borg Collective, the imposed nature of their society strikes a note of resistance in Seven who sees a layer of the society oppressed and brutalized.

Dave Baker gifts us with a very elaborate and deeply engaging plot. Not only are we given a Voyager story, but one that looks at a very important period in its history. I think that’s an aspect of storytelling that we often overlook when it comes to franchise fiction: the timing. I’ve seen this with other properties, so it’s something that’s not just specific to Star Trek; but to fill in the gaps in between essential points in the property’s history is as much a skill in the story creation as it is writing the story itself.

Choosing to focus the story on Seven is also a mark of quality. While she isn’t the most important character in the series, she still is one that had the most story potential. I don’t have exact numbers on this, but the stories that involved the Borg or Seven reconnecting with her humanity were very popular. Baker is capitalizing on that trend and it works in giving the audience a proper Voyager feel. There’s a great deal of authenticity in this as Seven sees the oppression in the Ohrdi’Nadar society and it sparks a reciprocal and appropriate emotional response.

Angel Hernandez is the right artist for this book. Hernandez has Star Trek comic credits to spare and not only lends his experience and talent to jumpstart a new series but his past credits also go far in establishing that authenticity I mentioned earlier. I would gladly buy any Star Trek book this guy draws.

Like I said, I often wonder what sort of story will I tell by the end of the day. So, I can’t help but return to the notion that the Ohrdi’Nadar society hold in that the established societal perspective is but a story and there can only be one. Anything alternative to that threatens the balance of society but at the expense of compromising rights and liberties of those individuals who hold it together. Seven sees this and while her Borg upbringing understands the importance of upholding the integrity of society, her newfound individuality recognizes the dangers of extremism of a collective.

Can you get any more Voyager than that?

Star Trek: Voyager – Seven’s Reckoning #1 is the pick of the week. If you’re looking for a good story to add to your day, then I hope it’s yours too.