Before I begin, I want to acknowledge and mourn the passing of comic artist, Tom Lyle. For me, his Scarlet Spider will always stand out as one of the most recognizable character designs in comic history. Rest in peace, Mr. Lyle, and for your work, we are thankful.

The theme for this week’s run is gratitude. As with every other piece of literature, comics manage to inspire reaction and reflection. As they are a shorter, more concise type of media, one of the values is that we are able to react to an opinion or perspective much faster than with a novel or watching a video production.

Comics are a succinct medium, and so are our opinions about them. Let’s get to the list for this week. 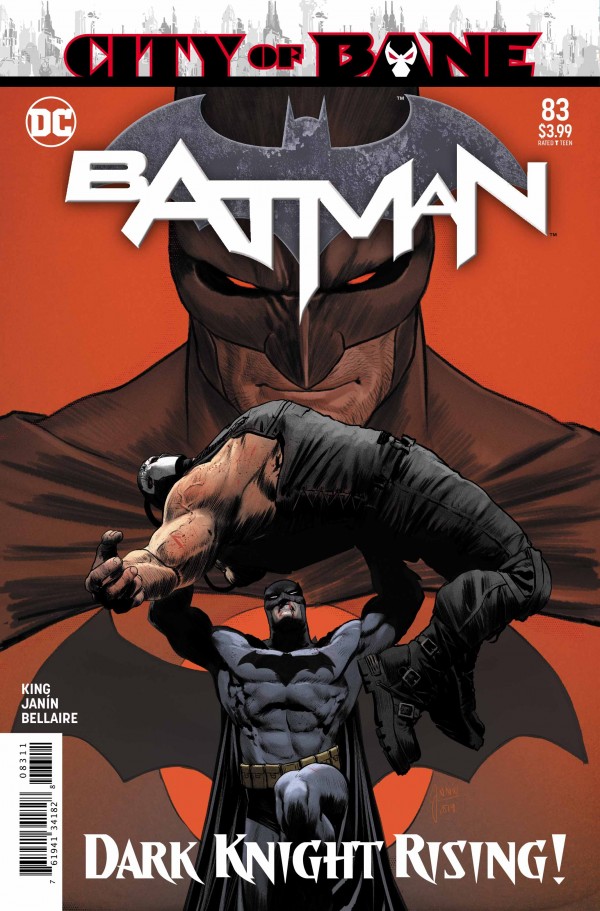 Talk about the absence of a positive, but in this case, there’s not a lot to be thankful for in this story. Batman is fighting to regain control of his city from Bane, his cadre of villains and the alternate Thomas Wayne; his sanity is teetering on the edge and the most significant event is the death of Alfred, whose last words frame the events of this issue from Tom King and Mikel Janin.

As much as I enjoy exposition, there’s a lot of it in this book. I feel that there’s a lot of filler that detracts away from the objective of taking Gotham back. Maybe I’m missing something, or maybe this plays better as a hardcover compilation, but there’s a sweet spot in terms of length for a comic story and this one is extensively long.

Still, there is a lot of poignancy to observe. Alfred’s death is a lot to absorb. An essential member of the Batman family, I’m worried about what will become of Bruce Wayne without his loyal aide-de-camp? The myth of the Batman has grown to include Alfred as a vital support character in the last fifteen years or so. There will always be a Batman, but without Alfred Pennyworth, will there be a Bruce Wayne?

Mikel Janin’s work is always exciting. Dynamic and filled with emotion, it’s the right art for this book, particularly with the events of this issue.

However, enough is enough. I need a resolution to this storyline. 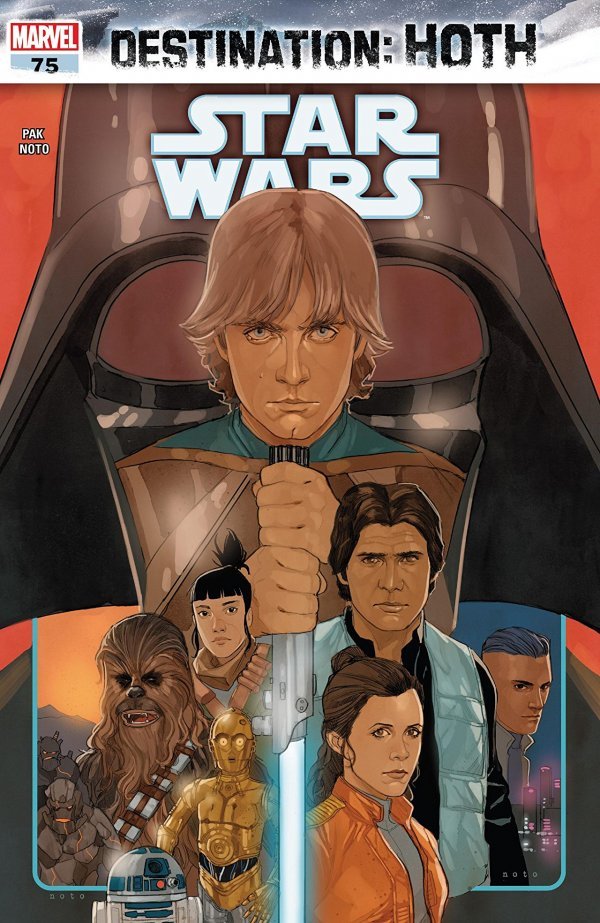 I’ve always been grateful to Marvel for retaining the Star Wars license. Some of my happiest comic reading moments in my formative years were Walt Simonson’s work in Star Wars and I love to see these characters in action again.

… And what a heck of an ending to this arc from Phil Noto and Greg Pak!

The fantasy of Star Wars means that we don’t have to worry about continuity too much. I mean, the prequels and the sequels don’t really worry about it, so why should we?

In my mind, Episodes IV, V and VI are the best stories out of this franchise. I honestly don’t think that’s disputable – just go to any fan site that rates the films in terms of popularity and see what the results are.

However, while the wise Powers-That-Be at Marvel have covered all their bases by creating comics that fit into every age of Star Wars, working between Episodes IV and V in this book, in my humble opinion, is a winning decision. Of course, with 75 issues under its belt, that’s obvious.

I love the interplay between Chewbacca and Vader in this story. After all, isn’t that the match-up that fans have always wanted to see? We also see wonderful rivalry for Leia’s affections between Han Solo and Dar Champion; C3P0 shows a caring side with the natives of K43 who also reveal an incredible and unexpected ability to deal with the Empire. In this story there were a great amount of surprises and it’s fair to say that this was probably one of my most favourite Star Wars stories in recent years.

Phil Noto’s art is so enjoyable. It has such vibrancy and clarity that it leaves no room for doubt as to what’s happening. The reader understands the characters’ intentions and state of mind and it is a wonderful envisioning of the story.

Somewhere, there’s some kid who’s getting the same kick out of reading a Star Wars comic like I did. Yeah – this is a comic that demands one’s gratitude. 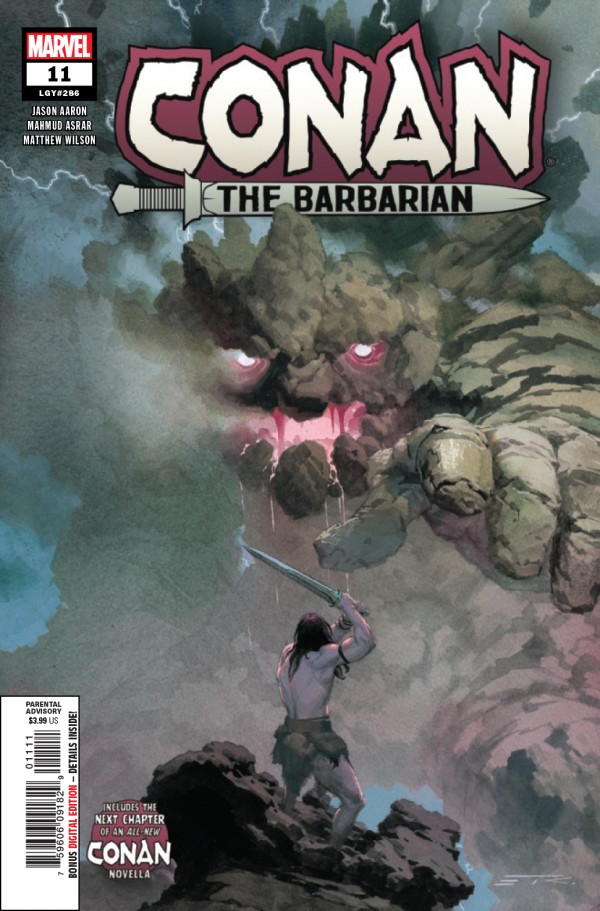 I feel blessed by the Hyborian gods, old and new, for reading this tale of the last son of Cimmeria … and it is a tale told by red blood streaking its pages.

Heh … there’s a vibe that Jason Aaron and Mahmud Asrar have managed to excite in me for reading Conan again. It’s a love of the old pulp fiction novels and not only asserts that Conan is one of those pulp characters who fits perfectly into comics, but also that Jason Aaron is a master of this style of storytelling.

In Part Eleven of “The Life and Death of Conan”, we know that Conan has been killed by the children of the Crimson Witch. However, you and I both know that Conan is not such an easy prize for death, and sure, Conan’s last few moments find him with a meeting with none other than Crom, himself. Crom, the reclusive and reluctant god who seems to regard worship with disdain. Yet, the meeting occurs.

Does Crom value his worship? No, but this is a pivotal moment that not only teaches us a few lessons about Crom, but also reinforces why Conan is such a great hero.

Mahmud Asrar’s work is bloody, gory and completely perfect for this savage, never-say-die conqueror. It has a quality that bleeds romance.

Thanks, folks. It’s a favourite title that I’m happy to look forward to every week. 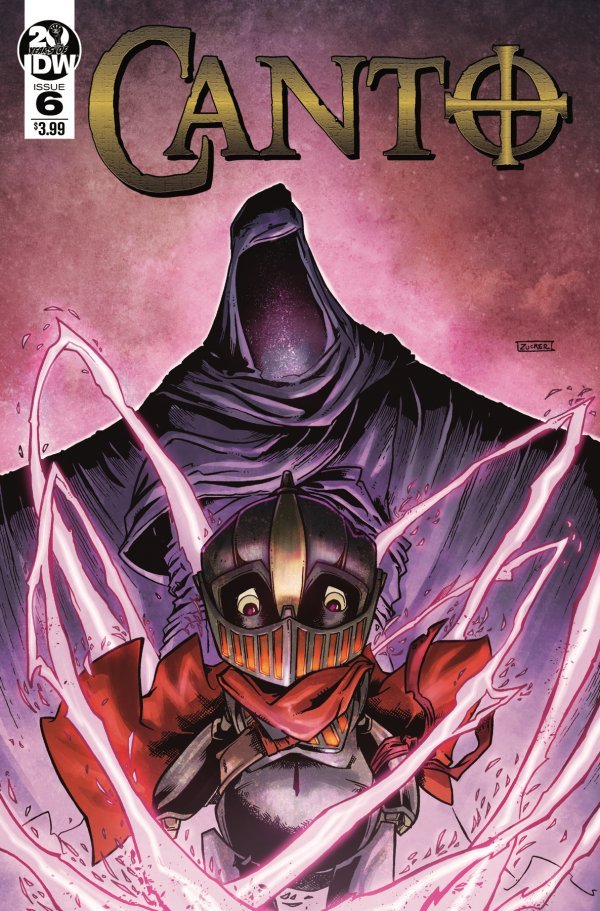 I’m forever thankful for reading this charming and wholly endearing story by Drew Zucker and David Booher. This is the final issue for this arc, but rest assured even though this series is finished, the little tin warrior will be returning to a new arc scheduled for 2020.

Of course, as the story has been following a simple quest motif, we learn if Canto has been successful in his quest and his encounter with the Shrouded Man. But success can have different realms of meaning to people. We look at those in our lives and see them with a better car than us, a larger house or a better paying job. Comparison can be such a motivation killer.

But Canto’s success has many implications and regardless of what he achieved or didn’t; what matters is his willingness to go on. Very much like Rudyard Kipling’s poem “If … “, when one can lose everything and never breathe a word about the loss, or walk with kings and keep the common touch, success becomes a wholistic way of examining the work and its effect on that person.

Drew Zucker draws a character who has both endearing and charming qualities, but it’s the emotion he manages to instill into the character’s helmeted face that is a real indicator of his artistic skill. The envisioning of Canto allows us to appreciate what a winner this character is.

But, I don’t think people realize that sometimes it doesn’t matter if you’re winning or losing – it matters that you’re still in the game. Sometimes I am one of those people. So, I suppose that’s what I’m grateful for after reading this book.

Yeah – Shasteen, Beyer, Johnson – these are names that bring me a great deal of relief. Johnson and Beyer have developed an excellent relationship in writing DISCO for comics. I think we are seeing a gradual shift in the television show away from the first season version of Star Trek: Discovery’s interpretation of the Trek continuum back to the incarnation of what long-time fans originally expected. Season Two saw the re-introduction of the USS Enterprise under the command of Captain Pike and the appearance of Spock. The focus was less on Discovery and more on the Enterprise.

In these comics, we are seeing that same sort of interaction. When L’Rell finds her chancellorship threatened, it is the Enterprise with Captain Pike and Lieutenant Spock who come to her rescue. Of course, a familiar TOS villain, Kor, is also in play in this story and those long-time fans will appreciate and welcome his presence in the story as it goes far to bringing those fans back “to the fold”, so to speak.

You see, here’s the thing about Star Trek comics; it’s been a medium that has been overlooked as a source of continuity-building in the history of the franchise. Not to say that there haven’t been good Star Trek comics – there have – but, the notion of comics as providing primary stories that support the continuum instead of simply acting as peripheral entertainment is something that I think Mike Johnson, Tony Shasteen and Kirsten Beyer have been instrumental in providing for DISCO.

… and Discovery needs it. I don’t think I’ve ever seen a greater divide in a fandom than in the appreciation of this iteration of Star Trek than I have with Discovery. But the more that it grows closer to looking like the Trek that these departing fans are used to, then there’s the chance that they will return to it.

But comics can be the meeting point for both Discovery fans and “other-Trek” fans alike in their appreciation of this series. I think it’s a chance for the writers who have television background, like Beyer, and seasoned comics writers (like Johnson) who can bridge the gap between seasons and provide supplemental background that can canonically pull into those comparative qualities and make DISCO more in line with the traditional Trek that has gone before. It’s like a rosetta stone of Trek.

The draw for these fans is Pike, Spock and Number One. Their supportive interaction with L’Rell in preserving her position is how this DISCO story is acceptable to these fans. TOS or canonically-appropriate material added to the show is how it will survive and this comic is an easy example of that.

Johnson and Beyer have the right idea. Shasteen’s art is always exemplary and provides an excellent visualization as to how this relationship can be seen. In fact, you might say the interaction of these creators serves as an instruction manual to the producers of Discovery as to how to do it right.

Star Trek Discovery: Aftermath #3 is the pick of the week. It’s a comic that brings a fandom together and that’s definitely something to be thankful for.

Heh … who knew? The way to save Star Trek is by reading comics. Isn’t that something to be grateful for?

Until next week – continue to be thankful for what you have!