The absence of a strong central authority in a given situation makes for chaos.

Now, I’m not an advocate for absolute despotism, but I do recognize that there has to be structure in all things for them to run smoothly, and comic stories are no exception to this rule.

The comics I’ve chosen for this week’s list exemplify this idea in some shape or form, so let’s take a look at it. 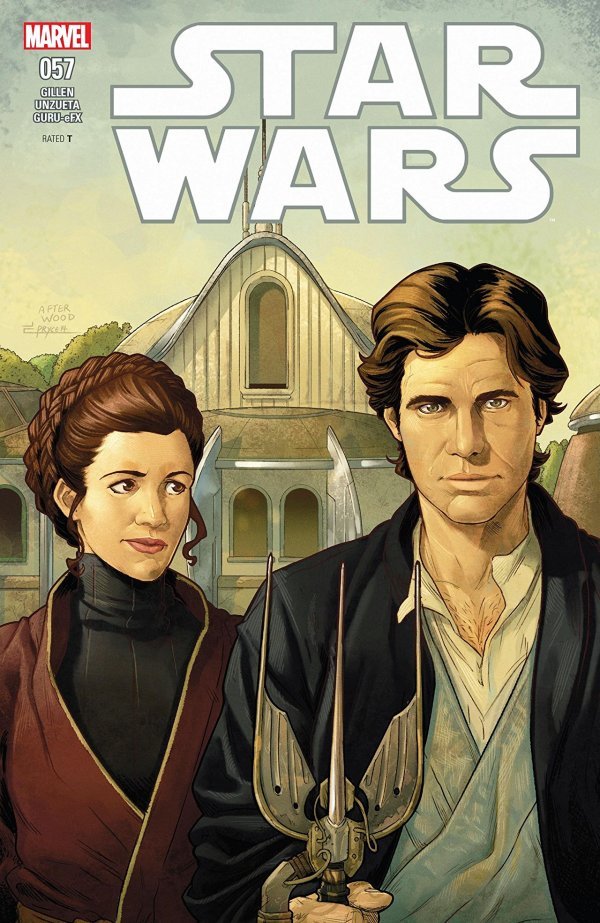 Part Three of “The Escape” from Keiron Gillen and Angel Unzueta continue to see Han, Luke, Leia and the rest of the company marooned on the lush moon of Hubin.

This is interesting. As we know the Empire is an expression of Palpatine’s Sith evil and desire to snuff out the freedoms of the peoples of the galaxy. Resisting this evil is the story. So, when the “Star Warriors” find themselves on a moon, ignored by the Empire, populated by former fighters who want nothing but to leave their fighting behind them, this has to raise a few suspicions.

I find myself not only intrigued but liking the character of Thane Markona. He’s mysterious and has a hidden backstory that will undoubtably prove either a hinderance or a welcome alliance to the rebel castaways.

There are some great moments in this story that lend themselves well to the relationship between Han and Leia and the character education of Luke Skywalker.

Luke is, for instance, the wistful-eyed one. He is an innocent who is slowly learning the ways of the Empire, and in the process, losing his innocence. It’s Luke who is the suspicious one in this story, but also the one who Thane Markona also knows is the one he needs on his side. While there is still a lot more to this story to go, I am thoroughly enjoying watching this mysterious character work his wiles on the young but alert Skywalker.

What about when the world doesn’t make sense?

Donny Cates and Matthew Rosenberg are the two writers on this story while Niko Henrichon is the penciller on duty. I’m not overly familiar with Henrichon’s work, so I’ll bow out from commenting it. However, I’m not opposed to it – if it works for the writers, then that’s good enough for me.

I have to say, I’m completely enamoured with this story. I have no idea of its conception and while I’m cognizant of the historical importance of renewing this title, it definitely stands out on its own as mystery story that I’m happy to follow down the path to its eventual destination.

But it’s the notion of waking up to a world that doesn’t make sense that really speaks to me.

I mean, at some point, I’m sure that a lot of us have had the idea at 6am that the world that we’re waking up to is actually the one that we’re actually dreaming about? That’s what this is. Daredevil, Punisher, Elektra and the Hulk have all somehow lost their memories yet still have the idea that the life they are all individually living is not right.

There are a lot of questions that have to be answered. As we are only two issues in, we don’t have them yet. However, I’m definitely curious, so I’m going to continue with this title and see what this world turns into. 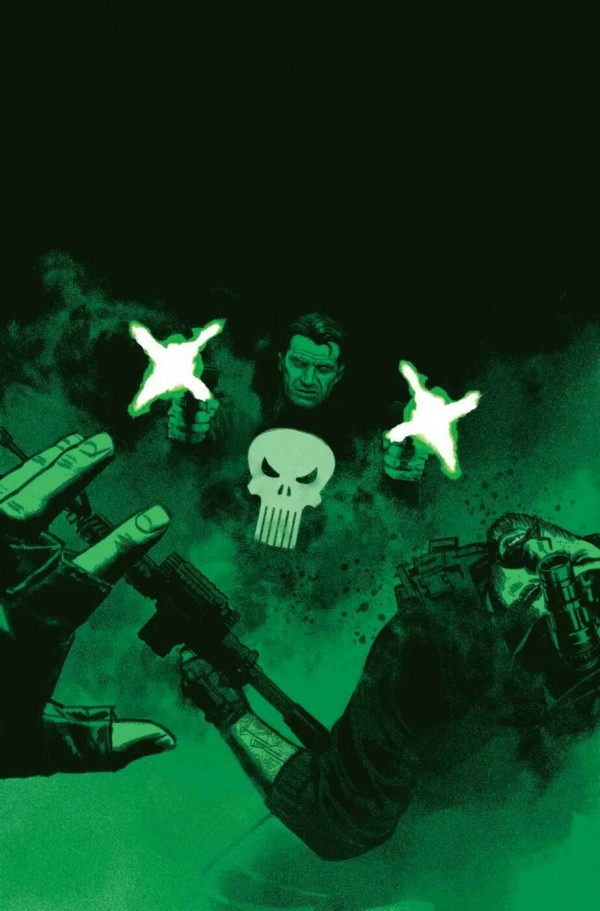 Another story from Matthew Rosenberg with art supplied by Szymon Kudranski, and it’s about one mans’ fight to enact revenge on the criminal underworld that killed his family. In this world, Frank Castle makes the rules – and breaks those that don’t fit into his plans.

Punisher is a rogue element within this system. The government let him down, so he’s trying to figure it all out by himself. Yet it’s not just the government that is hunting him down for the things he was considered guilty of, but those other rogue elements who also don’t work within the government. Frank’s getting it from everywhere.

And he’s on his own.

But that’s okay; the Punisher is at his best when he’s by himself. In fact, he teaches Jigsaw and the Chameleon that lesson fairly well in this book. When you see how resourceful Rosenberg portrays Castle to be, this story takes on a life of its own.

This is the best piece of dialogue in this book:

“What is that noise?”

Punisher’s One-Man Crusade against HYDRA will assure Frank of a solitary life; either incarcerated or constantly running from the law. That’s the sort of tragic flaw this character should have. One man, trying to do what he thinks is the right thing to do, while the whole world is against him. 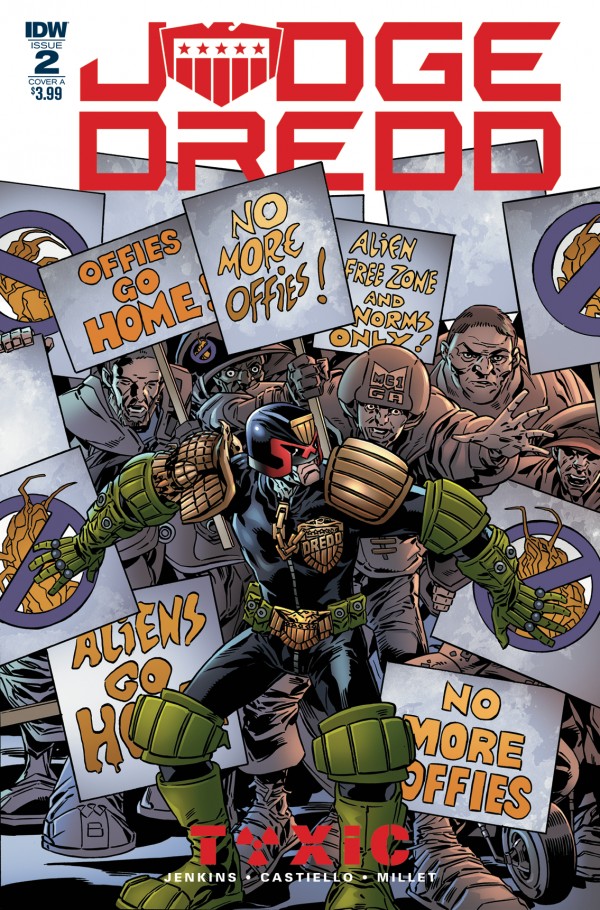 There’s a strong feeling of everyone knowing their place in this book. After all, Mega City One has to be highly structured in order to accommodate the overpopulating crowds who are forced to live in the only safe area in an irradiated former US. This post-apocalyptic city is a tinder box waiting to ignite a spark that will send the city into a chaos-storm of the social ailments that it’s known for.

First, the xenophobic distrust for the symbiotic aliens who cohabitate with the “scrubbers” – the unfortunate citizens who have to take care of Mega City One’s toxic sewer system – is turning into mass panic. Despite giving the symbiotes asylum protection, the civilian population still wants to find and kill them, forcing all the scrubbers to go into hiding. As a result, the city’s pollution levels are reaching deathly toxic levels.

The judges are doing all they can to restore order and find the scrubbers to convince them to come back to work. Protection, detective work and even a little bit of crowd control as the potential threat of Block War looms on the horizon.

What I like about this story is that this is a the truest-to-form Judge Dredd story I have ever read in recent history. It’s one that stays completely faithful to the Dredd that I knew growing up in Scotland and I am loving every page of it.

Paul Jenkins and Marco Castiello know what they’re doing, that’s for sure, and I’m also completely sure that Carlos Ezquerra would have approved.

In this case, Jonathan Hickman and Nick Dragotta have given us an apocalyptic world that is struggling to reassemble itself into a sense of structure and it is hard for anyone or thing, for that matter, to find itself. The world is lost.

The mood of this comic is always dark, sombre and reeks of failure. There is a delicate scent of hope on the horizon, yet every one of these last forty issues has always replaced it by the forlorn stink of corruption, deception and betrayal. In this sort of a world, how can anyone find success let alone be found again?

The characters are always larger then life itself. They, and the entire backdrop of this changed world, area bout as alien as anything from the stars. There is no structure, there is no central governing principle behind this new society save that of a clawing and desperate attempt to hold onto the fragments of the past to provide some tattered shelter against the oncoming storm of the future.

It’s always a sadness to read this comic, but one that I can’t turn away from. 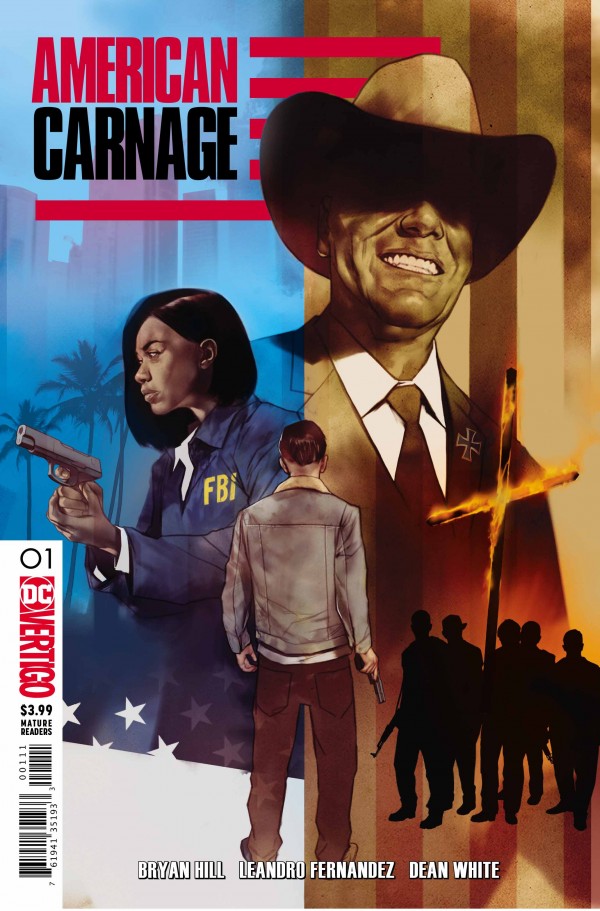 This is an all-too real story about what’s happening in America right now. We are seeing a move on the “Alt-Right” movement to manifest more of its presence in mainstream American society. Quite frankly, it scares me.

Not that I live in America but as a concerned neighbour, I have a degree of perspective on what’s happening over the border and I can see that the disrespect towards women, minorities and progressive values is becoming a standard. This runs counter to my own personal values and I think the leader of the country next to mine is emphasizing this standard whenever he can. As a result, event like the ones described in this story are becoming too common.

When Special Agent Sheila Curry needs to investigate a philanthropist who has connections to Alt-Right extremism, she enlists disgraced former FBI Agent Richard White to go undercover and infiltrate his organization.

That’s an extremely brief summary, but it’s essentially the story. But what interests me is how this type of story couldn’t have been readily accepted before Trump took office. This is the sentiment that is allowed to exist when a government tries to operate in a non-democratic and authoritarian stance, without applying open-mindedness and fairness in its decision-making.

Bryan Hill, Leandro Fernandez and Dean White bring us this story of the dangers of an authoritarian government mired in prejudice and hatred. It’s timely, painfully acceptable and a reminder of the way American society has changed.

Hey, I believe in authoritarianism, but there has to be the “right” kind of authority in charge. 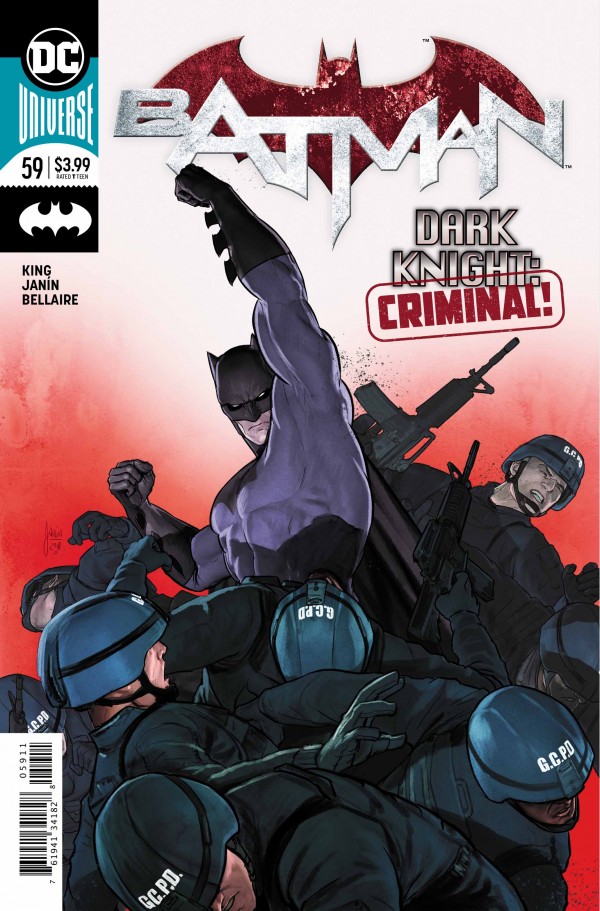 Batman IS the absolute epitome of the overpowering authority figure. His constant struggle is for control over the city. Gotham is a den of iniquity that is a watering hole for the absolute worst of the criminal elite.

The only way to stay one step ahead of them is to make them falter in their steps – to make them fear him, and in that moment of hesitation, he gets the upper hand.

In this case, we see Batman matching wits with Bane and the Penguin. While the Penguin answers to Bane, who seemingly is in a catatonic state while incarcerated in Arkham Asylum, the Penguin, bereft in his grief over the death of his wife, has nothing to lose any more.

The question is: is this a double-cross or is the Penguin on the level?

This captivating story, part two of the aptly titled “Tyrant Wing” by Tom King and Mikel Janin has the Batman halting in his own steps now. Batman’s Achille’s Heel is self-doubt. The moment he loses confidence in himself is the time when the villains are actually one step ahead of him.

When you shake the confidence of a tyrant, he loses his ability to rule.

Which is what makes Batman #59 the pick of the week for this week’s list. The level of psychological warfare in this story is what makes it stand apart. But who is matching wits with Batman? Is Bane really locked inside a near-coma psychosis or is he putting on a performance of a lifetime? Is Penguin truly in the depths of grief, or is he dead-set on revenging himself on two of his biggest adversaries?

I don’t know, but any world that can create a story like this one, regardless of its fallibilities is one that I want to be a part of.

If only life could be a story that we could edit …