Back in March, the common perspective around us began to take on an extremity of panicked proportions. In fact, there were post-apocalyptic jokes being thrown around social media that this virus was going to herald the beginning of the end of the world as we knew it. That accounted for the rush on toilet paper, for some unknown reason. Well, toilet paper and ammunition sales in the U.S.

No-one likes lockdowns. No-one likes to feel afraid in an uncertain future. We need bravery, boldness and resilience to help transcend this fear and give us hope for a more solid one.

Imagine my surprise when I read Post-Americana #1 (Steve Skroce, Dave Stewart, Fonografiks) this week and found … I liked it? 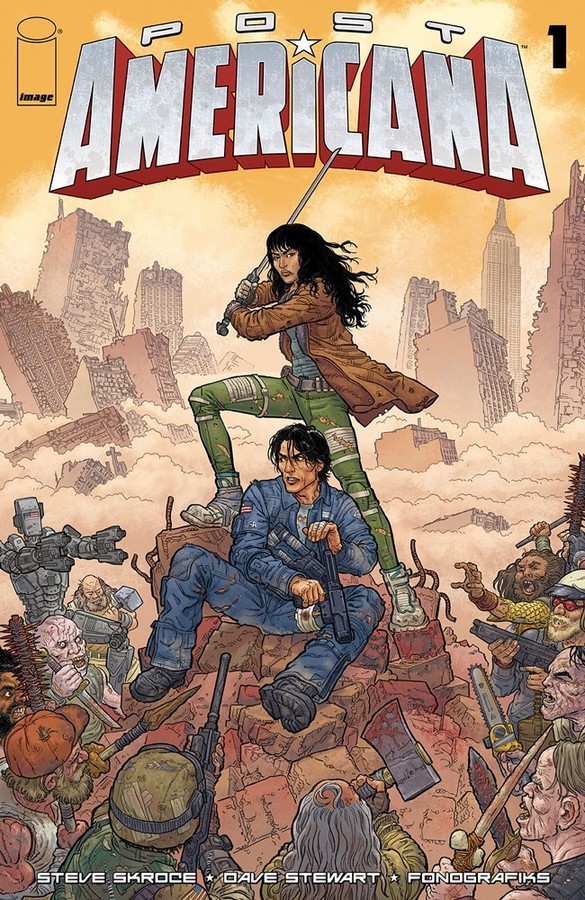 Seriously – the last thing I wanted as my city goes into COVID lockdown was to be reminded about the possibility of the destabilizing of societal structure. But there is something about a really good post-apocalyptic story that demands a true test of a writer’s imagination to see just how badly society can be messed up that can’t be ignored. Skroce has given us a true-to-form wasteland America that not only keeps readers on their toes but also allows us to see how warped and twisted he can make America.

Skroce worked with Brian K. Vaughn on another story in this vein: We Stand on Guard. In this book, the USA decided to turn its attention to its Northern neighbour to pillage their abundance of natural resources, namely fresh water. It’s a minor type of post-apocalyptic story, just concentrated in Canada.

The art is great and it’s impressive that Skroce gets to showcase his writing talents as well. The level of detail (ie: the clothing choices of the cannibals, the computer-generated imaging of the mountain fortress, etc.) is really astounding in this book as well. It’s clear that there is a lot of concrete worldbuilding in the creation of this story.

Dave Stewart’s colouring of the different shades of human skin used in the clothing is something that also really caught my eye. I’m definitely going to be following this book, despite how insecure I feel about the world’s future right now!

Then there are the old faithfuls like Conan the Barbarian #16 (Jim Zub, Roge Antonio, Israel Silva) that literally epitomize the boldness that we love … but needs a bit of thought behind it! 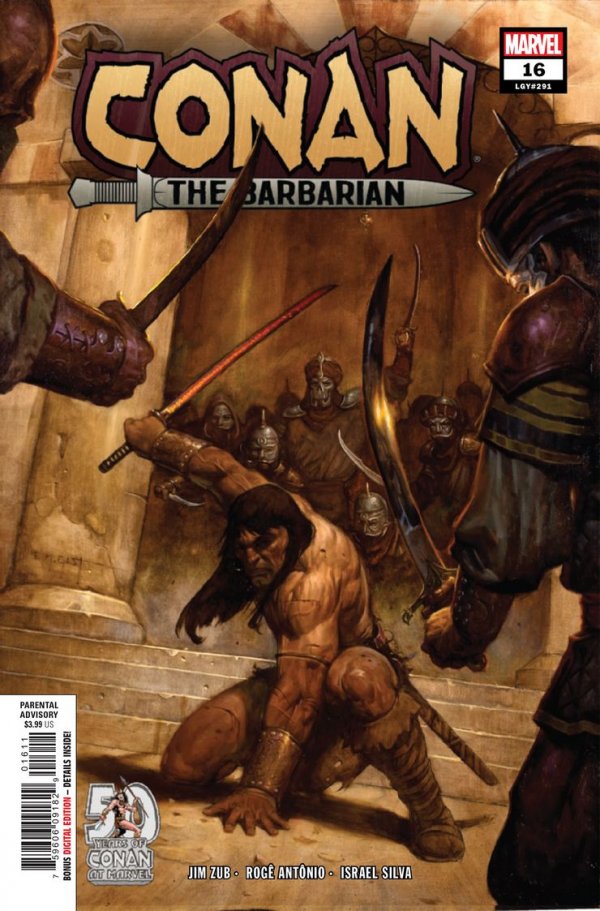 This is part four of “Into the Crucible”. Conan fights his way through the dungeon, and is overwhelmed by the crowd of worshippers whose religion he has spat on and defiled in the arena and somehow has to survive and escape the City of Garchall. He has no plan, just a single objective and he is ready to do anything – savage, brutal and purely instinctual – to achieve that end.

But that’s how you write Conan. He’s the type of adventurer that never knows the outcome of his choices – just what he hopes will happen. He’s the type of chaotic hero who somehow winds up doing the right thing even after he tries to do a selfish one.

Conan’s a hero whose choices of actions are always like throwing dice. He instinctively knows the right thing to do, but just trusts that luck will hold his way. Jim Zub knows this – he’s a seasoned Dungeons & Dragons writer who has a great amount of experience with fantasy characters – particularly those with a sense of wild abandon. We kind of need to embrace this type of as we try to white-knuckle our way through this pandemic. Hey – anything we can do to make it through this time is pretty much what we need.

Of course, Conn also acts like he’s a dead man anyway, so he has nothing to lose. I don’t think we’re quite at that point yet, but Conan’s boldness is what we will need.

Roge Antonio’s pencilling is fierce as the hero he draws. Plenty of blood, bruises and savage sword strikes – it’s a dynamic style that properly conveys the daring of this character. I like it a lot and to my mind, it perfectly captures the essence of the story. 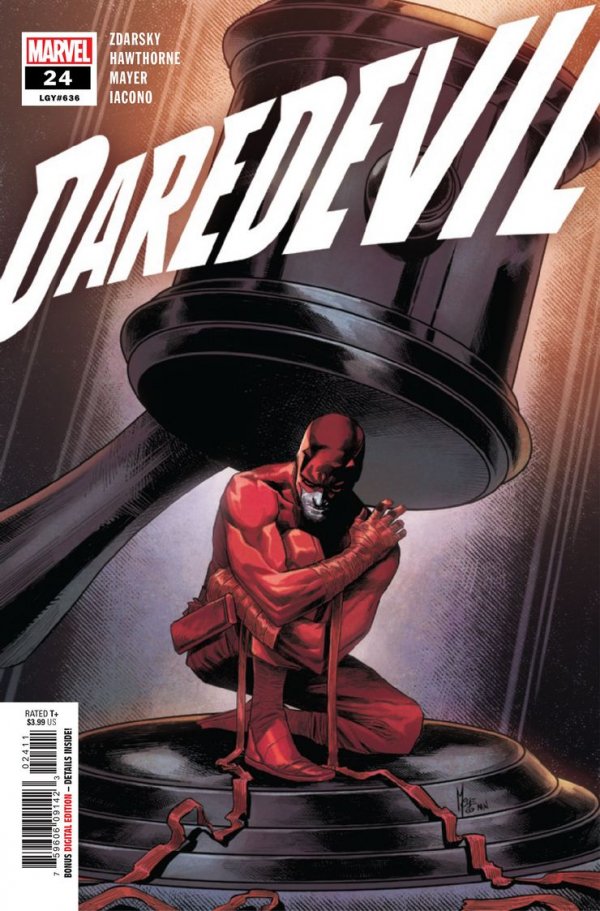 I think for me, the perfect blend of fear and bravado is the character of Daredevil and I’ve been enjoying Chip Zdarsky’s treatment of this character as we continue with Part IV of “Truth/Dare” and Daredevil’s battle with the American justice system.

You can fear for your physical life, but what about losing your social life? This arc seems to deal with Daredevil simply trying to secure his place in the society he has fought to protect. Forget a superhuman drama, this is simply a human one. It’s this facet of our lives that people seem to truly fear losing during this pandemic.

There is a very ugly misapprehension about personal liberty and freedom, with those concepts thought to mean that people have the right to do whatever the hell they like without fear of repercussions. However, when society faces a real crisis, those things shouldn’t take precedence over the safety and security of us all.

If you resent being told to wear a mask then you should have no problem with getting secondary status when it comes to getting treatment during this pandemic. Freedoms come with responsibilities, and it’s this notion that freedom is somehow free that really grinds my gears.

Daredevil isn’t like that. In this part of the story, Daredevil has to protect his community by being bought out by enlisting the help of one billionaire to thwart the plans of another billionaire, namely Tony Stark against the Stronwyns. Meanwhile, he has to secure that same community from crime and also operate as both an officer of the law and a defendant in a murder trial. Juggling all these balls and the only thing that Matt Murdoch is thinking about is … others.

Because that’s what it comes down, doesn’t it? It takes a special type of bravery to put your needs above others. Of course, that’s what superheroes are supposed to do, but in this case, Daredevil has not only risked his life but his way of life as well. He is jeopardizing his friendships, career and his own freedom in order to ensure that others can have theirs.

That’s altruism to the highest degree and it doesn’t involve any sort of super-powers – just thoughtfulness.

I can’t criticize the art. After all, the work of Messrs Hawthorne, Mayer and Iacono is as integral to the story as much as the literary efforts of Zdarsky. It all serves to visualize not only the emotional torment of Matt Murdoch as he balances the welfare of so many against his own, but it also captures the intensity of the forces rallied against him, in the forms of the Kingpin and a fully focused Typhoid Mary and even the authority of the American judicial system itself.

That’s why I have to go with this book as the pick of the week. It’s a lesson for us all to observe and take to heart. Daredevil may be a fictional hero, but this is a story about how we can all be heroes just by simply thinking about others’ freedoms, namely their freedom to live. We may be walking around asymptomatically, not showing signs of the virus. But, if we think about just distancing ourselves, washing our hands, and ironically, wearing a mask, then maybe we show that boldness, that bravery that is needed to be heroes in our own, simple ways as well.

Pick of the Week: Daredevil #24