After all, October 31 is the night when ghouls and goblins conspire to raise all sorts of hell on my street, and as a good community member, it’s up to me to dress accordingly in my Knights’ Templar outfit and brandish my four-foot, two-handed Claymore into the night … as I distribute sweets and candy.

But it’s also interfering with my comic-reading time so I also have to brandish my mighty words and look at what comics are going to tantalize you this week! 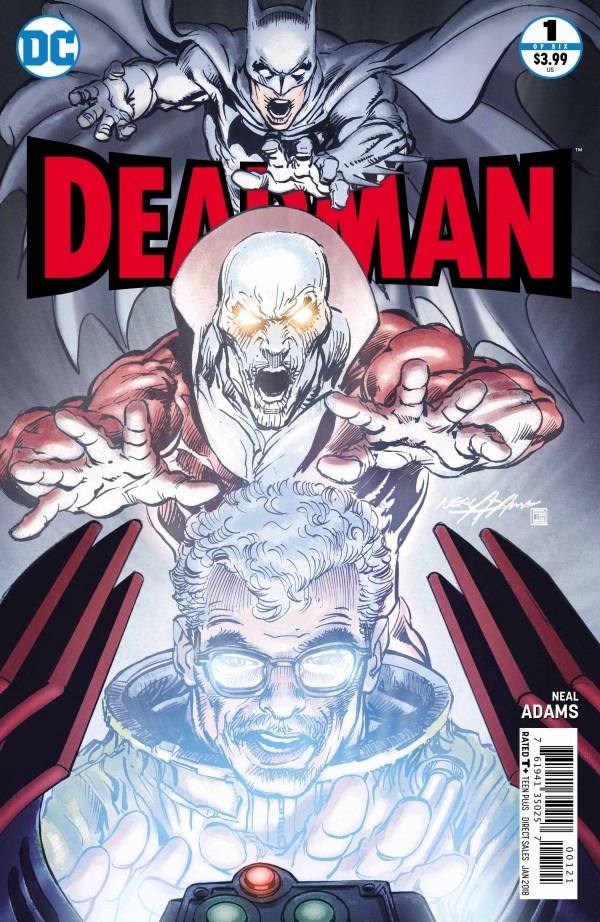 Hmm … I’m always a sucker for a first issue, but Neal Adams? The guy’s a master, and no-one can deny his artistry. This is penciled, coloured and scripted by Adams and that says something if you can claim to be a triple threat.

However, I found this story a bit too rushed for my tastes. Still, I love the scenes when Deadman rushes out of the body he’s possessed and rages at Bruce Wayne. It’s very ethereal and given that we are leading up to Halloween, very appropriate. 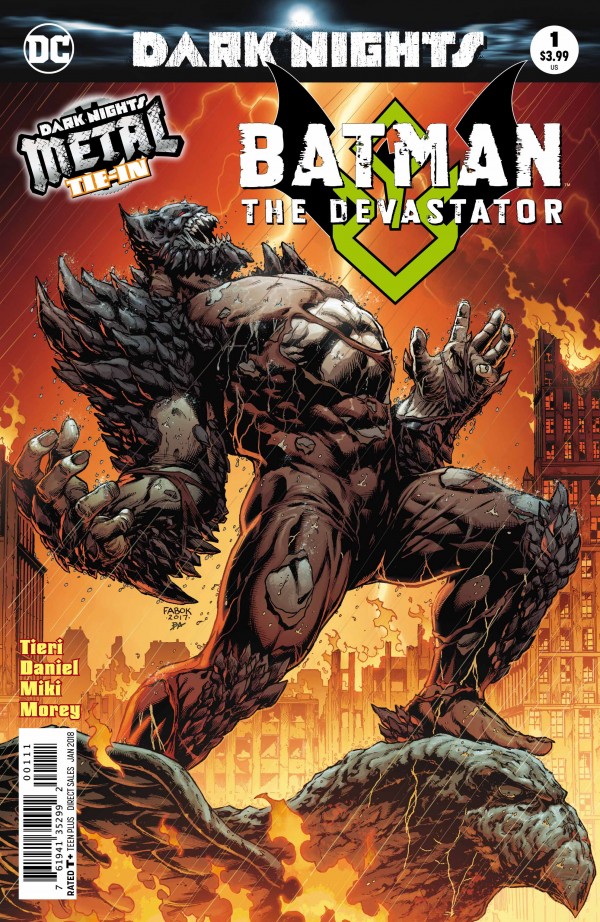 Another Dark Knights tie-in and this one definitely hits me in the Superman-Batman bromance department. After all, how else will Batman manage to ever one-up Superman in a head-to-head? Well, infect himself with the Doomsday Virus, of course!

Certainly, a major setback to Superman’s plans to keep the Earth safe, but this incarnation of the various Batmen has to be my favourite. After all, he has real conviction and a background origin that has a good deal of substance to it. Thank you, James Tynion IV and Tony Daniel! 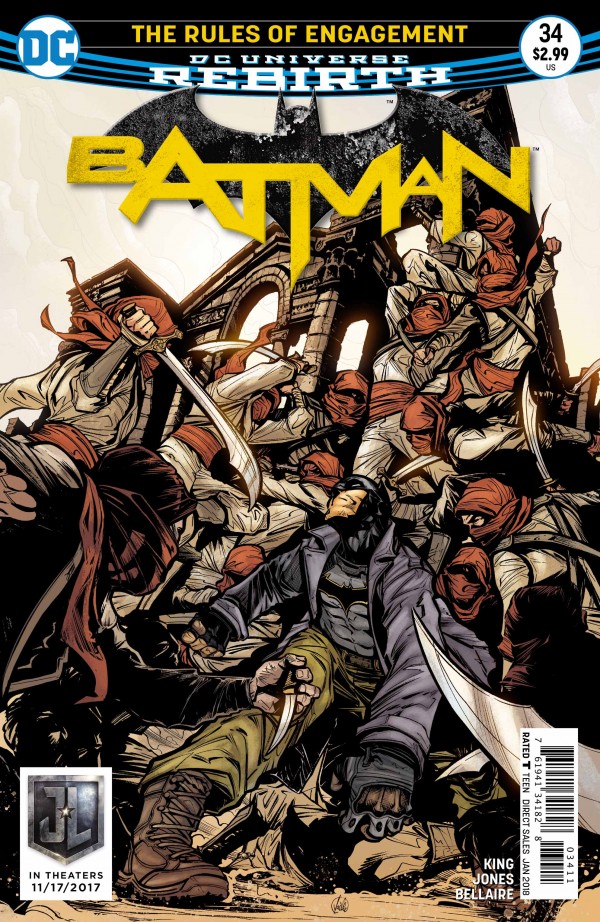 The Rules of Engagement – you have to love that story arc title.

But oh my God … when the two women in Batman’s life meet, well, you know there will be sparks. I love this dimension of Batman’s life. Not only does he have two elite-trained martial artists for lovers, but they are willing to kill each other for him.

You know, I never talk about ex-girlfriends with the wife; this is why.

Where the hell did Tom King come up with this one? I mean, it’s a pretty good story idea and you know that there’s a punchline coming at the end of this arc. I have a good idea of what it might be but I’m compelled to follow this story through ‘til the end to see if I’m right.

King’s stories are human and in the world of comics where nothing is supposed to be normal, this brings superheroes into a perspective that makes them not only relatable, but somewhat lovable. If I’m right then we’ll see if we can even love the world’s greatest detective. 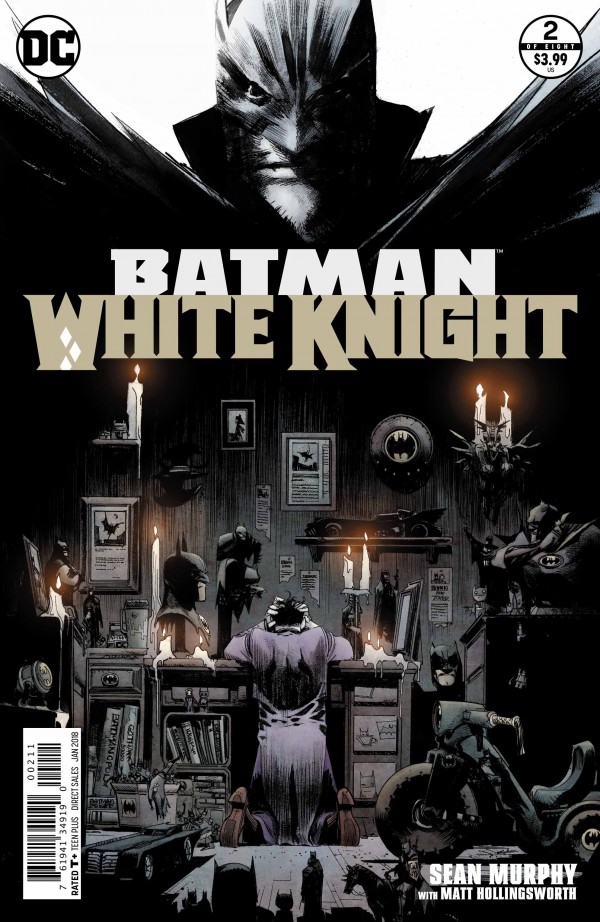 A very convoluted storyline in which the Joker tries to go straight, blaming the city of Gotham and Batman for his mental condition. Now that the meds are all gone, he’s normal and ready to save Gotham from itself and the Batman. 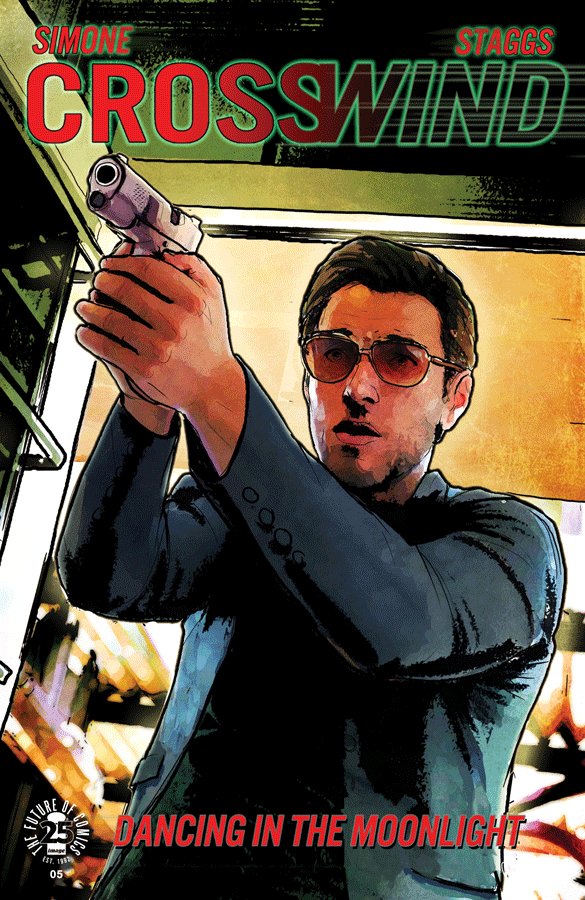 Such a compelling story! We finally learn more about the reason for Juniper and Cason’s transference in this issue. But this discovery is set against one man’s loss and another man’s potential gain. It doesn’t matter what gender you are – power is still the ultimate decider of your position on the board of life. The message – “be the shark” resonates soundly in this issue as the two characters begin to come to terms with their identities yet still cling to who they are. It’s an amazingly unique story and one that you can’t easily put away. 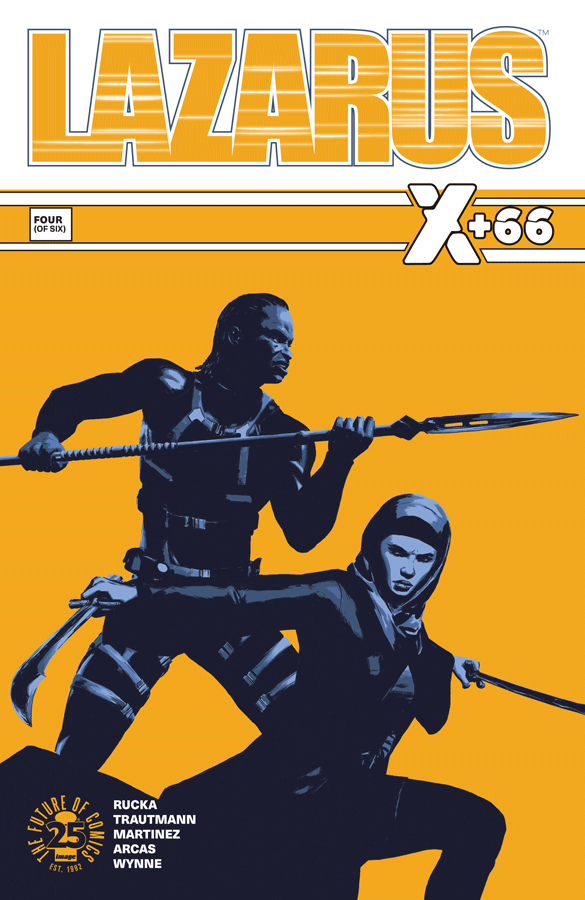 Greg Rucka always gets my attention and my respect.

I am in love with this dystopic future he has invented; one in which wealth turns into cutting edge power and technology and sees the ultimate societal manifestation of unrepentant hubris. I love this world so much that it makes me question my own values!

I think it’s the warning that he gives us. If such a future can be so clearly described to us by someone in this century, then who is to say that it can’t happen? History is always 20/20 vision in hindsight, but it’s the foresight that’s needed here and Rucka can imagine it with such ease.

But this mini-series looks at aspects of this world that can’t be seen in the regular storyline. We’ve seen the serfs discontent with their lowly position in the world in previous issues, but this issue is a reminder that value of honour and loyalty still manage to obtain some pre-eminence, even in this society. The South African and Israeli Lazari – my mistake: the Lazari of the families of Nkosi and Meyers-Qasimi – are instructed to work together until a moment presents itself when working together is not an option. Together they are trying to obtain information on the Vassalovka Lazarus – the Zmey – that is in an abandoned research facility. However, they work together so seamlessly that they truly are not just the most physically developed of humanity, but their loyalty proves they are of the noblest as well.

It’s a great series and one that Rucka is pleased to announce will be opted for television, along with Larry Niven’s Ringworld and Neal Stephenson’s Snow Crash. In his letter column, Rucka can’t believe that his name is actually used in the same sentence as those illustrious creators, but I say, why not? The intricacy and craftsmanship in this comic are about as detailed as anything Stephenson could craft. 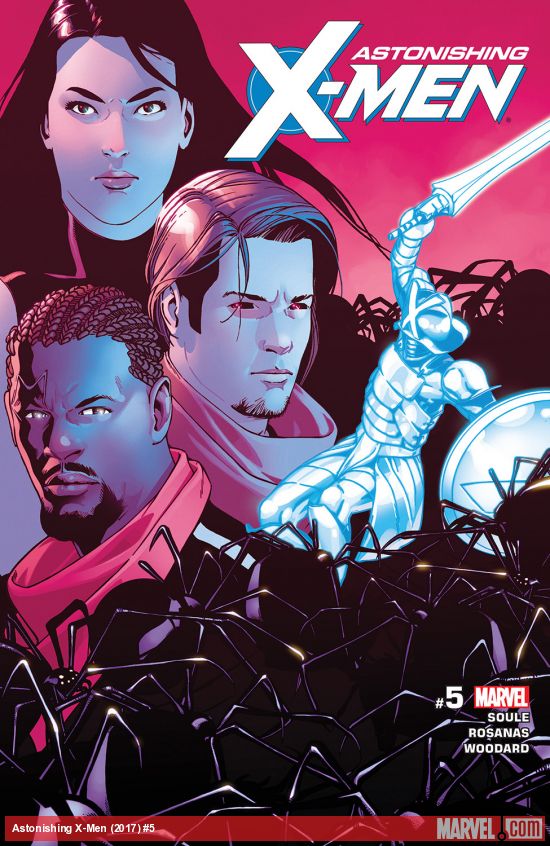 Charles Soule and Ramon Rosanas assembled this one for us and it’s Part Five of the arc titled: Life of X. I’m coming in late, so there’s a lot I’ve missed getting to the party, but I have to say that I’m excited to be reading a new X-Men story. It’s been what … a few years? And being introduced to the art of Ramon Rosanas is a new pleasure. I like this guy’s pencilling. It reminds me of a cross between Paul Smith and Marc Silvestri. Great stuff and I like to see the Shadow King back again. He’s an awe-inspiring villain and the perfect nemesis to Charles Xavier. 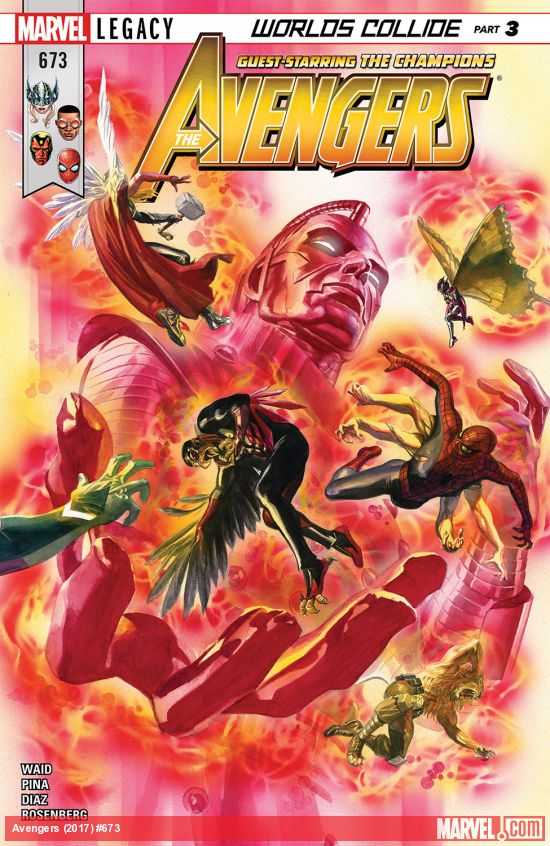 It’s a bit of getting used to … well, from my perspective. I haven’t read the Avengers in a long time. But writer, Mark Waid has definitely hit on a theme that I can definitely relate to: fatherhood. When Vivian Vision (the Vision’s daughter) gets kidnapped and changed by the High Evolutionary, I really feel the pang of a father panicking over a lost child. Yeah … that one really hit me in the feels.

Ed Brisson AND Mike Deodato? And an epic confrontation between the Maestro and Logan? First, I’ve really been missing Wolverine and it’s such a balm to my comic-lovin’ soul to see him in action again. But second: it’s hard not to ignore the homage to Len Wein in this issue. Actually, there’ two. If you look at the memoriam piece in the comic, it’s important not to forget this gifted creator who gave us Wolverine. But the fight between Maestro and Logan is definitely reminiscent of that first time we were introduced to Wolverine, as he fought the Hulk. It’s a beautiful story by Brisson and an inspired tribute. 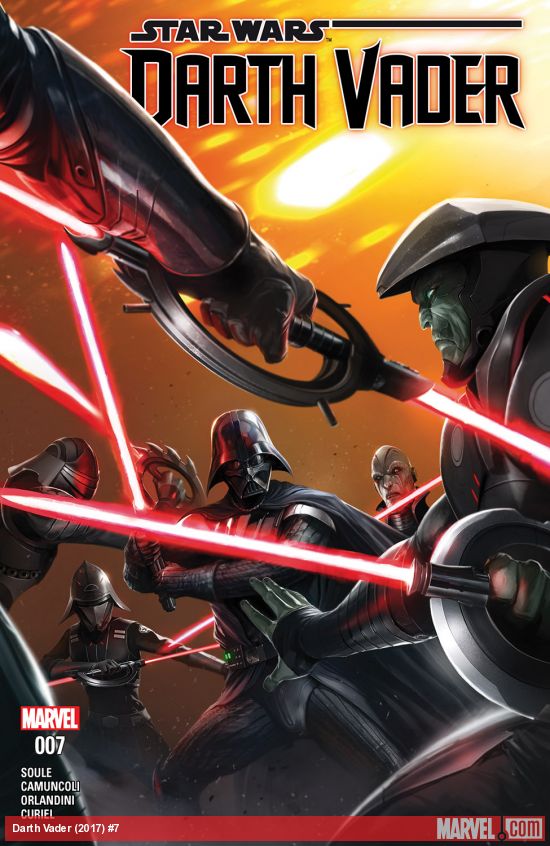 Every time I see that cinematic crawl – even on a comic page – I still get shivers of excited anticipation. I love Star Wars. I mean, I’m a die-hard Trekkie, to be sure; last name of Kirk, and all. But Star Wars fulfills a fantasy side of my being that fills me with the wonder and joy I remember as a child. It doesn’t matter if it’s a film, a novel or a comic.

Charles Soule gets that.

This is Part One of the arc titled The Dying Light, and it’s about Vader in charge of renegade Jedi known as the Inquisitorius and their mutual task is to hunt down the remaining Jedi and destroy them.

It’s an awesome story that places us back in the realm of the original trilogy and I can’t find anything wrong with that.

But more than that, Soule gifts us with a Vader who is still unsure of himself; a vassal before the Emperor who has just risen him up to the status of apprentice. Vader lords his status over the Inquisitorius, but he does not have the full confidence of the Vader we know by the time of The Empire Strikes Back. Darth Vader is probably the greatest and most prolific movie villain of the 20th century who can also challenge for the title in this one. He deserves his own comic and Soule knows how to present this villain in a masterful yet somewhat imperfect way.

So, with Halloween coming to a close tonight, as I write this, it’s clear that the epitome and master of evil has got to be given the status of Pick of the Week!

Darth Vader is a magnificent representation of a complex character, especially trying to masterfully present the difficult art of the prequel. There are no secrets from the audience as we already know these characters’ fates. Charles Soule takes the nuggets of what we know about this character and make them more relatable to us. We understand what it’s like to be insecure because we have all been there at some point in our lives. Why should Vader – Anakin Skywalker – be any different from us?

Soule brings Vader to us as a flawed and frustrated character still trying to determine who he is. It allows us to come full circle and see the Vader of Return of the Jedi ad that lends authenticity to this book and allows the prequel to work.

Now, it’s time for me to put away my Templar armour and my own sabre as Halloween finishes. It’s been a bonus night: not only did I get to give away candy and dress up, but I also got to read a whack-load of comics at the same time.

Pick of the Week: Darth Vader #7