Better late than never, I suppose! But once more, the question has to be asked, what’s on the list of reviewed books for this week?

I have to give a shout-out to IDW’s ROM #4. I’m really enjoying this new re-invention on a classic character that used to be owned by Marvel back in the day. While they can’t repeat the character from those books for obvious reasons, it’s enough to re-ignite the nostalgic fuse in me and pick these books up.

I enjoy the re-interpretation by Christos Gage and Chris Ryall, with art done by David Messina They’ve taken this hero and made him relevant for the 21st century. There was a stiffness in the old Galadorian Space Knight of the late 1970’s that Ryall and Gage have replaced with a willing adapatability as the Dire Wraiths do to their new environment on Earth. It’s a even match of powers, but they have the numbers. There’s a lot of growth in this character that makes him more of a hero suited to the present world. The variety of covers that exist for this book is also something to enjoy. I particularly liked the one done by Al Milgrom and Lovern Kindzierski. Check it out.

Another honorable mention goes to Jason Aaron’s Southern Bastards #15. Aaron’s vision of the Deep South and one particular town’s love of its high school football team is a wonderful study of a microcosm of human drama. I’ve said this before, but Aaron’s strength is in his characterizations. I can believe that a man like Coach Boss can exist because of the intricate, gritty detail Aaron cares to add to him. While I am the farthest thing from anything the Deep South or American football could entertain, I am mesmerized by this story and look forward to reading a new issue whenever it comes out.

The Unworthy Thor #1 is another Jason Aaron book that gets added to my list of honourable mentions. I really want to shake Jason Aaron’s hand, buy him a beer and let him talk my ear off into the wee hours of the night on just how he manages to juggle multiple stories all at once.

As much as I’m not into the recent developments with the Marvel Thor saga, this one really caught my eye because the Odinson is my Thor. As much as Jane Foster is a veritable character in her own right, she’s at best, a second banana. Aaron brings his gift at innovation to delve into the inner workings of the Odinson’s mind and bring to light his own sense of despair at being unworthy and of course, gain insight into just what the secret of his unworthiness is. I’m intrigued and I have to add this one to my list of mentions for this week. I’ll keep an eye on this one.

Finally though, we get to the pick of the week.

And once more, it has to go to Peter J. Tomasi and Patrick Gleason for their Superman #10. 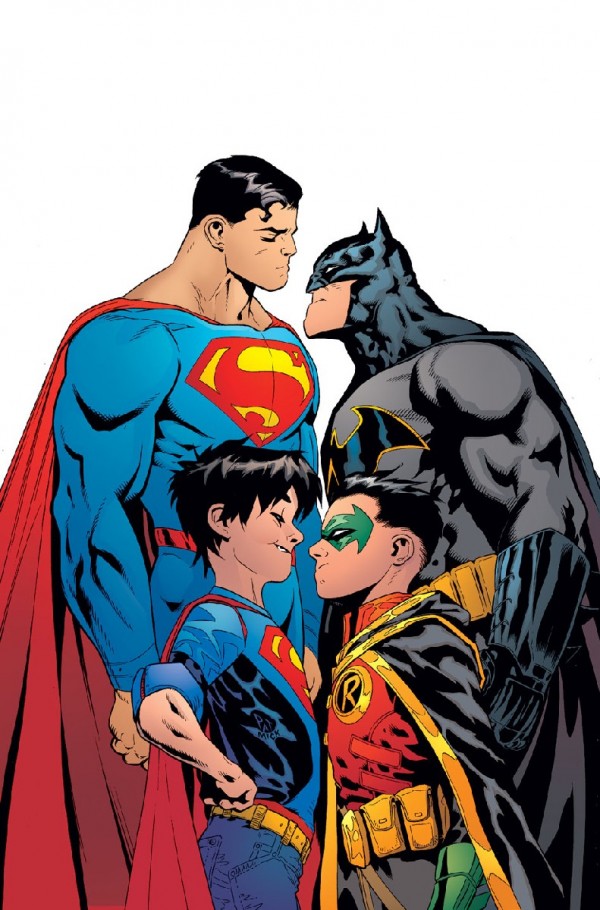 Maybe it’s because I’m a dad but I love exploring this dimension of Superman’s character. Seeing him as a father is a new experience, particularly when we remember that Superman was an orphan who lost his father at an early age. Then to have the great fortune in getting another respectable man as a father, only to lose this one as well. If there’s anything Superman would appreciate, it would be the presence of a good father.

To see Superman rise to the defence of his son and to face Batman in a similar parenting situation – it’s actually a very cool perception of the World’s Finest in these roles. I can’t say I’m a Damian Wayne fan, but seeing him in this book actually entertained me. His childish pettiness and vindictiveness was a wonderful foil to Jon Kent’s simple niceness and to have Alfred reinforce that in the Batcave scene was a particular joy.

Tomasi and Gleason have been on my radar for the last few weeks. I’ve never really been into Superman, but I have to confess that seeing Superboy and his dad has been something that I’ve really enjoyed. It’s hit a particular note with me that resonates with my own parenting and I find myself often relating to Superman when he is placed in those parenting situations and either critically second-guessing or agreeing with his parenting decisions. I have to say that’s a comic-reading scenario I never thought I’d experience, yet there it is.

That alone makes the experience of reading this comic one to remember. It’s something that will bring me closer to my own children and actually allows the medium to reach a new level of understanding and appreciation.

From the other perspective, there’s probably a kid reading this and thinking, what if Superman was my dad? If so, now that’s just too cool for words. After all, I can attest to the fact that making a kid dream is actually an accomplishment and if Tomasi and Gleason are doing that, then they’re success stories in my book.