In the course of reading the comics for this week, I gave some thought to the concept of being in a state of alarm and how it makes an impact on the way we learn.

Yeah – heavy topic for a bunch of funnybooks, huh?

Here’s the theory in a nutshell: basically, we can’t learn if we are experiencing insecurity during the times when we are supposed to be at rest. Our bodies develop and grow while we sleep and our minds also process better when we are calm and not worried about basic issues. There’s a bit of psychology in here that I don’t profess to know anything about, but I do know that if we are fixated on matters of needing love and reassurance, or our physical needs, then we can’t develop into the people we want to be.

Maybe it’s because of report cards this week, but I couldn’t help but notice there’s a theme of this notion in this week’s selection of books. So, without any further delay, let’s take a look at the list for this week. 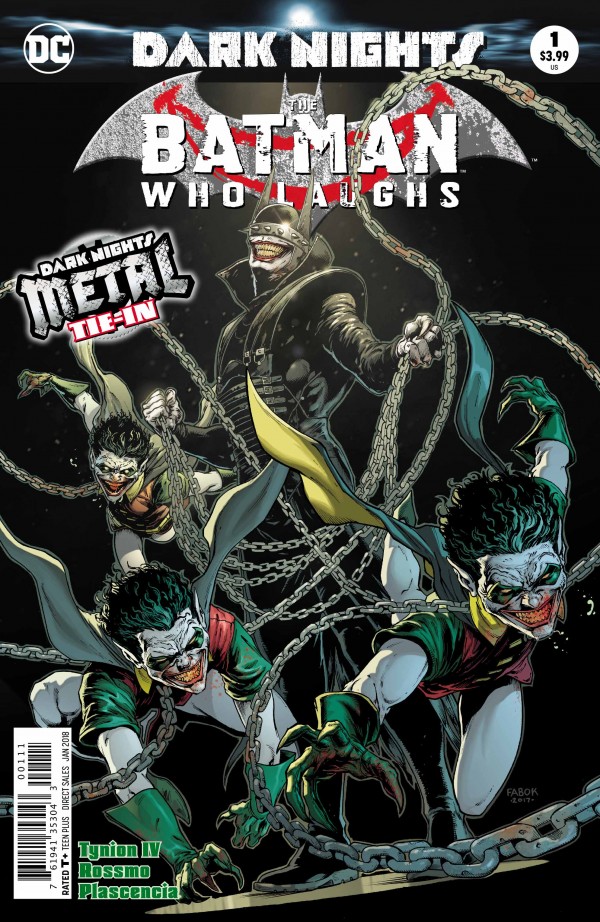 Yeah … poor Earth 22’s Batman. Not only was he in constant state of alarm when he watched the Joker systematically kill portions of Gotham including some of Bruce Wayne’s friends, he also had to endure knowing for a week that he was infected by the worst version of the Joker’s nano-virus to date resulting in a monstrous transformation into “The Batman Who Laughs”.

I was pretty savagely repulsed by the extent of this Batman’s metamorphosis. This is probably the sickest version of the twisted Metal: Dark Nights Batmen that I have seen to date. Of course, that means that it was successful. When you see the look of terror on that Earth’s Superman as he beholds the gruesome incarnation of his friend wielding black kryptonite against him and his wife and son … well. You soon figure out why this is definitely the worst Batman to encounter.

Jason Fabok’s cover really captures the fear that this character is meant to instill and James Tynion IV does an excellent job of presenting this caricature of Batman.

Absolutely loved the transformation in this issue, and I think you will too. 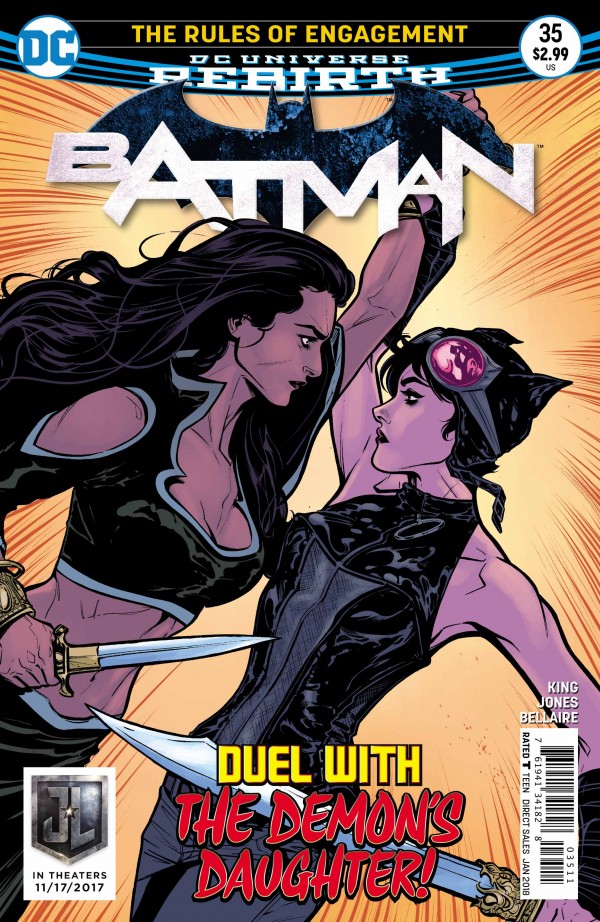 Okay, it’s NEVER a good idea for the ex-girlfriend to meet the new fiancée! Tom King should know this!

Well, he does … and that’s what makes this an incredible story to read! King takes the mundane minor-relationship drama that a good number of us can relate to and magnifies it by heroic proportions! When we see Catwoman hold her own against Talia Al-Ghul in this arc of ‘The Rules of Engagement’, we see how merciless she is but how resolute Selina Kyle is in defending her love.

I was blown away by how much King managed to make me relate to Talia, despite her ruthless reputation. We still need to remember she is the mother of Batman’s son and will always be a part of his life.

How many times has a new wife heard that line?

But in this case, it’s also a test of mettle. Will Selina Kyle have the stomach to be Batman’s bride? Who better to decide that than Talia? It’s a real romance, in the conventional sense, that comic fans can appreciate. 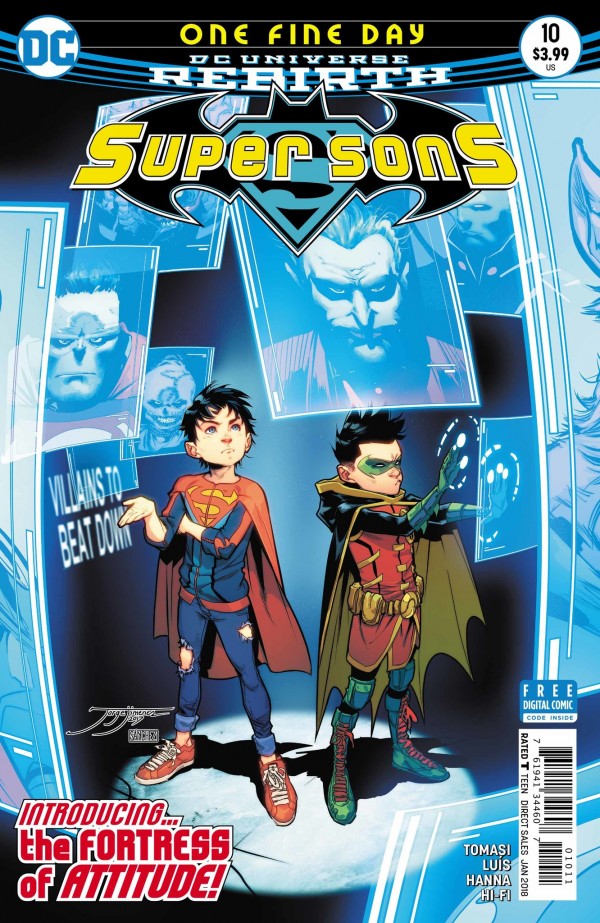 Talk about the young trying to grow and develop … then look no further than this title.

Peter J. Tomasi has given us a completely appropriate example of the idea of kids being at rest in order to help the grow and develop! This is a truly heartwarming and delightful story that quite frankly, endears these characters to the reader. I mean, even Damian Wayne is a more understood character able to be seen as an angry teen, too angry for his age.

In this issue, the Super-Sons get their own secret headquarters. Completely within the life-experience of a developing child to have their own tree-house, fort, or in this case, an underwater pressurized lair rigged out with a mainframe computer linked to the Batcave and Justice League Headquarters. Just what every growing boy needs.

But the image of Jon Kent teaching the superior Damian Wayne a simple moment of enjoying the sensation of flying is purely priceless that anyone who wither has kids or who works with kids can fully enjoy. Though this is a comic about kids and for a kid audience, sometimes I think it’s the adults who enjoy it more, particularly when you see Jose Luis’s wonderful artwork strategically placing Bruce Wayne and Clark Ken often to the side or in the background watching at their sons with pride. Those re parenting moments for sure.

I love this book because of these moments. As a parent and a teacher, they really resonate with me. These are kids learning, growing and coming to terms with their gifts. Tomasi has to be a dad. 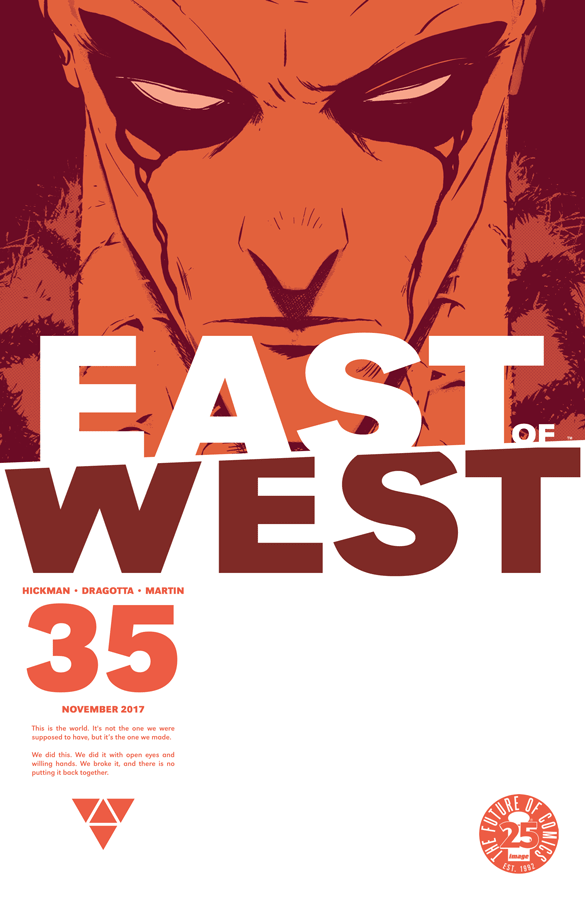 Speaking of dads … it’s a pretty twisted relationship to see a child born of an immortal force of nature and human queen, raised by a computer in isolation try to identify himself, his relationship to his father and his role in this dystopian future.

I think this has to be one of my favourite comics. Jonathan Hickman is a writer who has an expanded appreciation for life, the universe and everything. His vision encompasses projections of the future that is quite beyond my own limited imagination and makes for incredible stories that far surpass a lot of other comic writers.

Simply speaking, the man is cosmic.

But this story is different in scope from other issues of this book. Instead of looking at what went wrong with the world and its history, instead, it focuses on Death, the errant Horseman, simply trying to re-establish relationships with his missing son, Babylon.

Now, to put this into context, Babylon is the son of Death and Xiaolian, Premier of the House of Mao, the leader of one of the most powerful contingents in the New America and who now has to make the decision to go to war after a sneak attack in the last issue. It’s odd, to see Babylon, raised in isolation by a computer who tries to change his perceptions to seeing the best this burnt world has in a changed light, trying to skip stones or fish. It’s likewise odd that a force of nature like Death values these simple notions than the destiny he is to follow in this twisted world’s cycle.

This issue focuses on a father and child reconnecting. It’s a simple but endearing value that makes us think about our own lives. We all have family and this is something to inspire a reflection on our own relationships. Even if you don’t have children, we have all been children at some point and the care and concern that Death evinces for his kid is enough to ignite the emotional triggers in us when we consider ourselves as either children … or parents.

I think this issue is my favourite one to date. While I love this book, this particular episode in the series definitely hit a note with me, especially in this week as I consider other people’s children and the ways they perceive the world around them.

Comic writers are more gifted writers than people often think. Not only are they able to conceive of stories that involve fantastic characters of heroic proportions, but they are also able to communicate important and relevant perspective about these characters and concepts in an amazingly condensed number of pages. Comics force us to put expanded ideas into an abbreviated format and that makes them more understandable and enjoyable.

East of West #35 is the pick of week for this week. Not only does it fit into the frame of mind that I am apparently in this week, but it also epitomizes the idea of those enormous values ‘writ large’, reduced to a format that is easily appreciable. Hickman has that type of talent: making the macro, micro.

… And he does it well that he keeps me coming back, month after month to see how this new world is burning, only to make me pause at a story of a son and father figuring out how to fish.

As we all head into the week, make sure you get a chance to ease your own alarm, spend some time on your own relationships with your special folks and get some of your own growth and development in. Hey – read some comics!