There are always moments in time you wish you could go back and change. It’s such a universal constant of the human condition and it makes for really good stories. This is a handy, because that’s exactly the theme for this week’s review of comic titles. Huh … who would have ever thought that universal regret would be so useful? 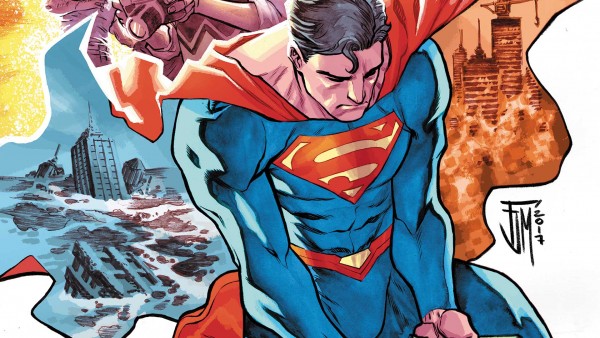 A wonderful cover by my Toronto neighbour, Frances Manapul.

In this story by Dan Jurgens, Rob Williams and Will Conrad, Superman deals with the aftermath of The Oz Effect as he reconciles his father to the man he thought he was. It’s a real moment when you doubt your parents, but Superman’s reflections reveal a darker issue: namely that someone has been manipulating reality with the fabric of time to keep a secret from Superman.

I particularly liked the moment between Bruce and Clark relating to each other as friends rather than peers. Too often we forget that the relationship between the “World’s Finest” is about friendship over collegiality. It’s good to see this dynamic reinforced. Too often, it gets overlooked, forgotten and devalued, particularly in the wake of the Batman Vs. Superman era.

These are moments to enjoy and while I’m running the risk of being schmaltzy, they shouldn’t be overlooked. 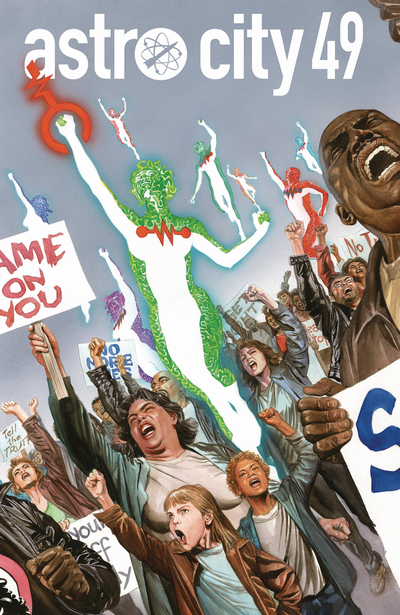 This is a sad one. There are always lost moments that are felt and exacerbated by a loved one’s absence. I like Kurt Busiek’s work and this issue is another great example of the humanity we can all aspire to.

The Super Hero genre is one in which we read about people changing for deep, emotional beliefs. They saw loved ones killed, great injustices in the world or other reasons for become heroes and change the world. In this story, we see both the change and the consequences of that change.

Kurt Busiek’s Astro City is marked by this type of emotionality. It brings the Super Hero down to Earth. The comic becomes a morality tale in which the hero known as the Resistor is the human compilation of the urge to resist the oppressive forces of injustice wherever they may turn up.

I actually like this hero concept because it works on the principle of the general will embodying itself as a force to challenge what’s wrong. it literally is: power to the people. But it’s tinged with the notion that this type of power costs something more valuable than money, power or any other common material good: relationships.

There’s  lesson in this story and Kurt Busiek delivers it with thought and feeling. 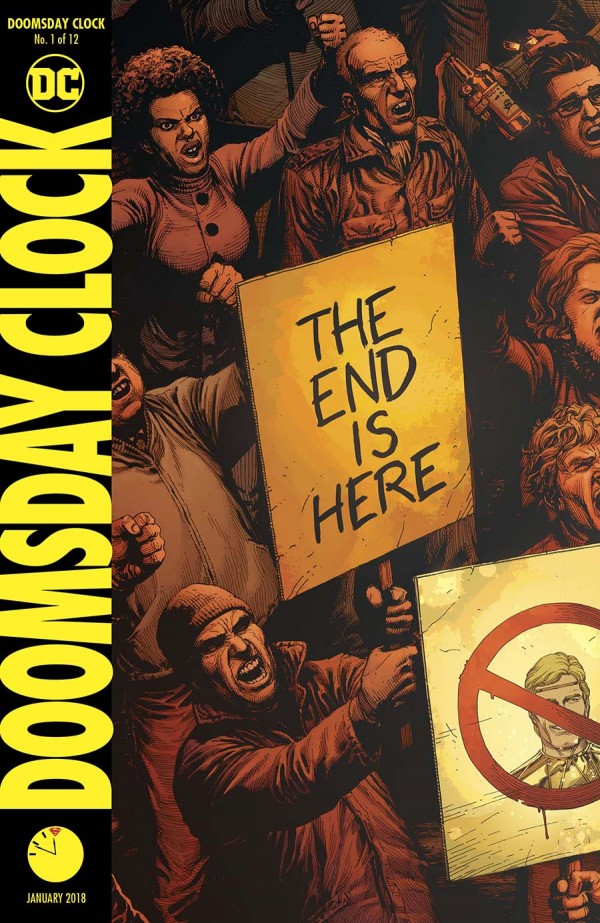 Nothing reinforces lost time than a clock with a deadline.

I know people say that there are some things that should never have a sequel, but I can’t help but enjoying this. This is more than a sequel too; it’s an integration into the full DC universe and to be fir, why not? Fans are allowed to appreciate beauty but at the same time, they don’t own the property. This book is subject to the whims of the copyright owners and if they want to keep The Watchmen in isolation, then read the main book and leave it at that.

But this is a thing to read. It poses so many questions: who is under the Rorschach mask? Who is the Marionette and the Mime? Where are Night Owl and Silk Spectre and will Ozymandias actually succeed in rebuilding his dream? Geoff Johns and Gary Frank have definitely outdone themselves on this series, if this first issue is a promise of the incredible storytelling to come. I want to be them.

The whole premise of this comic is built on recapturing those moments when mistakes were made and correct them. It’s actually quite an innovative tale and one that really does capture the spirt of the original Watchmen. I quite enjoyed this and am eagerly anticipating the remaining issues! 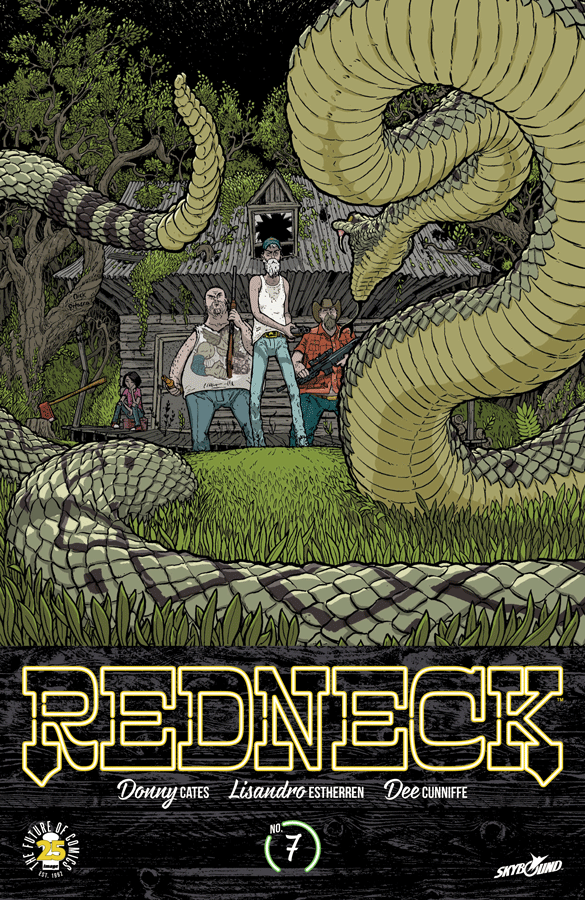 Donny Cates spins a yarn that could have come from the heart of any good ol’ boy in the Deep South. There’s a lot of wisdom, sorrow and lost days in the characters of this here old tale.

What if vampires were country hicks?

I mean, how would they explain their origins to the new vampires they’ve created? Which is the focus of this issue. In fact, the best line has to be: ‘when you were human, did you know all about being a human?’ There are sad memories that aren’t brought up in the discourse of a sire vampire explaining to a younger about why vampires should only be created in dire circumstances – and about failed sad moments when this happened inadvertently.

It’s a humane version of the vampire trope and it makes a lot of sense to the reader who doesn’t want to be taken in by the glamour of being a vampire. 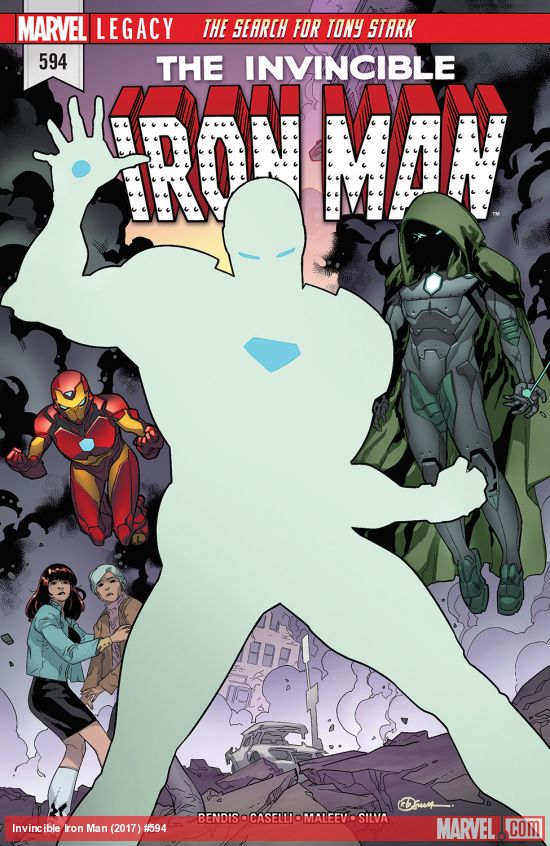 Mother to the rescue! I don’t know how many times I have wanted my mum to come to the rescue, even in my current dotage.

We’re witnessing the last few issues of Brian Bendis as his stint with Marvel has run out and he has made his way over the barricade and into the welcoming arms of DC Comics. Now these are moments that are disappearing and that we will be sad to see go. However, I’m definitely overwhelmed with curiosity to see what he will do over at the competition.

I was never much of an Ironheart fan, to be honest. I don’t like spin-offs and I found that Riri Williams was too much of a superfluous convenience without a lot of creativity behind her. In all honesty, I prefer the new and improved Doctor Doom.

Still, it’s Stark’s mother, Amanda, who really stole the show for me in this issue. Not only does she have an unwavering belief that her son is okay, but the way she fights for him in the boardroom – well, it’s just something that you’d have to appreciate. A really good issue; even Ironheart’s combat sequences were a lot of fun. 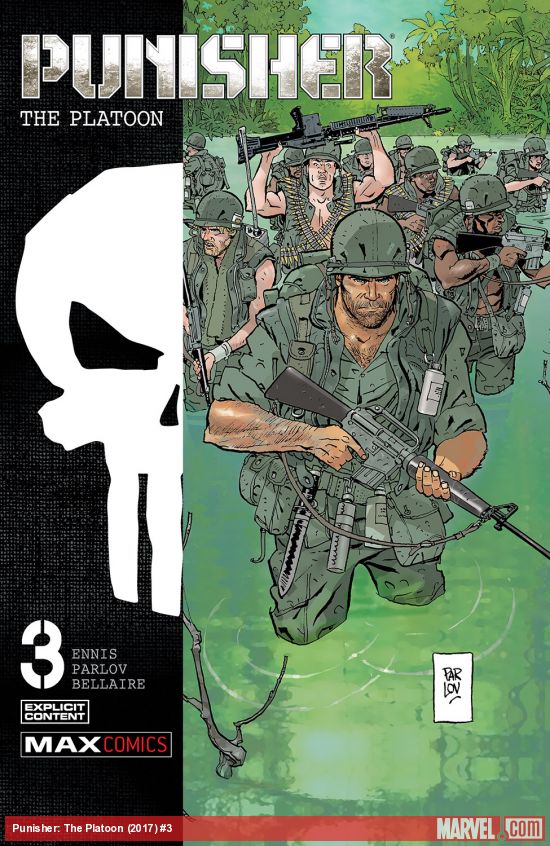 Garth Ennis is one of my hero-writers. He and I have a lot in common in our backgrounds. We both grew up on the same comics and he presently lives in the area where I was born. The man has mega talent and his fascination with military history makes him a perfect candidate for this book about the Punisher’s past.

I’m not overly familiar with artist, Goran Parlov’s work, but I have to say, while it was thoroughly enjoyable, it’s Ennis’s writing that stands out in this book. Not only does he manage to capture the essence of veteran soldiers reminiscing about their shared experiences in combat, but he also delivers the juxtaposed memories of fear and triumph in intricate small victories like replacing M16’s with the more rugged M14 rifles.

One of Garth Ennis’s gifts is to use the minutia of military history and turn it into a majorly entertaining storyline. He and I both grew up on British military comics and the man is quite the military scholar. He can take personal accounts of veterans and turn them into the most entertaining stories. If you’ve read any of his recent other military-themed works, you’d see what I mean.

It’s the hurdle of transferring that talent and knowledge over to American comics that is the sticking point, yet Ennis has found a way to overcome the obstacle in an effortless way. Brits love war stories but American seem to love war facts. Ennis marries both of these concepts and makes this book a perfect repository for all that combined knowledge and talent – and I have to say that I’m embarrassed that I didn’t think of it before.

This is an understated book, in my opinion, and a magnificent example of Ennis’s talent in a title that really needs more hype, particularly with the new Punisher series on Netflix. The Punisher was never one of my favourite characters to begin with, but Ennis has given him new life by exploring his roots.

Not only is it framed in lost moments, but it’s also a story that needs to be celebrated. Vietnam was a war that the USA never wanted to remember. Ennis takes the historical aspect of surviving soldiers’ stories and has made it a vital aspect of understanding the character and nature of the Punisher, which I find way more entertaining than the actual hero’s present-day exploits.

There’s regret and there’s also a recognition of honour, courage and victory in the little things. Those are probably the moments that stand out in our minds as our best achievements. Pride is a very powerful thing.

And now it’s time for the Pick of the Week.

Speaking of pride, it must be a proud moment for Geoff Johns to be entrusted with the continuation of one of the most prolific and memorable stories in comic history. I have to say that I was very nervous about this work, but the first issue has really captured my imagination. After all this is a story about recapturing some of those lost moments or picking up on story threads to see where they can take us. There’s no regret in this book – it’s about redemption.

That’s the cure to regret. Is there a greater feeling than that? Doomsday Clock promises all of that, and that’s a feeling we should never compromise on – even in the face of Armageddon.

Pick of the Week: Doomsday Clock #1