The end of November always has such a feeling of anticipation for me. There’s an accelerated intensity as we get closer to the Christmas shopping season and the comic retailers add new products to their shelves. It’s a magical time that only seems to get better with every week of comic reading and then before you know it, a jolly fat man is throwing gifts down our chimneys.

Still, I was never one for anticipation and there are some remarkable items on this week’s list, so instead of waiting for the big day to get here, let’s delve right in and unwrap these goodies! 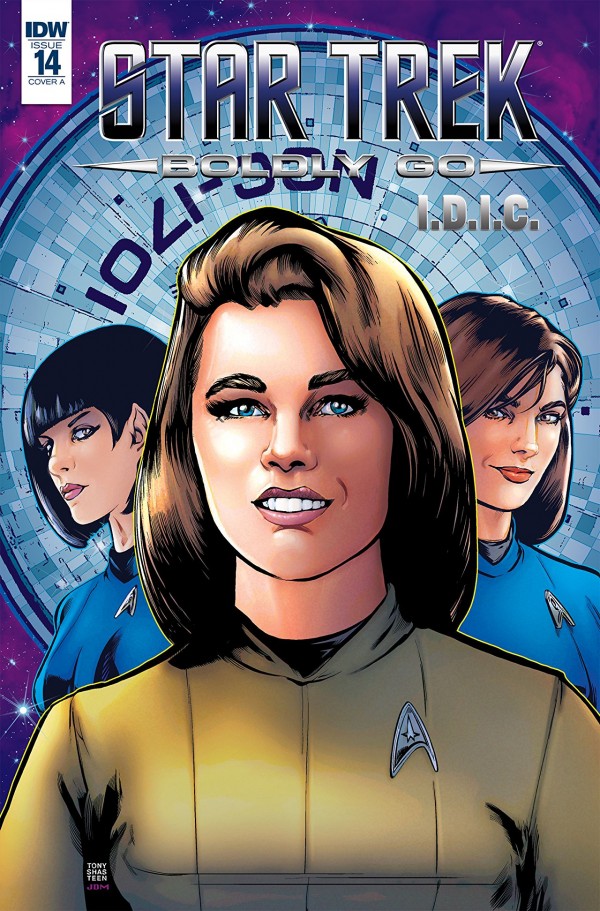 I’m so into this story. Mike Johnson has got a hell of a good tale going with this arc. It has a tremendous amount of variety to offer and backed up by Megan Levens’ solid work, it definitely promises a lot more fun to come as we explore this story further.

I.D.I.C. Part Two continues as we meet yet other dimensional iterations of the crew of the USS Enterprise.

So far, we have the Orphan, a version of James T. Kirk raised by Klingons and whose sworn arch-nemesis is the half-human, half-Vulcan science officer, Simon Grayson, on board the USS Enterprise. Then, we meet Jane Tiberius Kirk, and JTK-1701. While there are a variety of Enterprises in this gathering of entities from other alternate universes, we are only allowed a glimpse of a few of them.

I’m trying very hard to decide which is my favourite. What I did find interesting though, is that in all these alternate universes, the Enterprises were all variants of the Kelvin Timeline Enterprise, which sort of places the Kelvin as the prime universe in this comic. I was actually expecting to see a TOS version of the original NCC-1701 Enterprise somewhere in the double-page spread of different starships all milling around, but to my disappointment, I didn’t find one.

Still, the surprise villain at the end of the story was definitely not what I was expecting – and while I have to say that it shouldn’t have come as a surprise, it did. 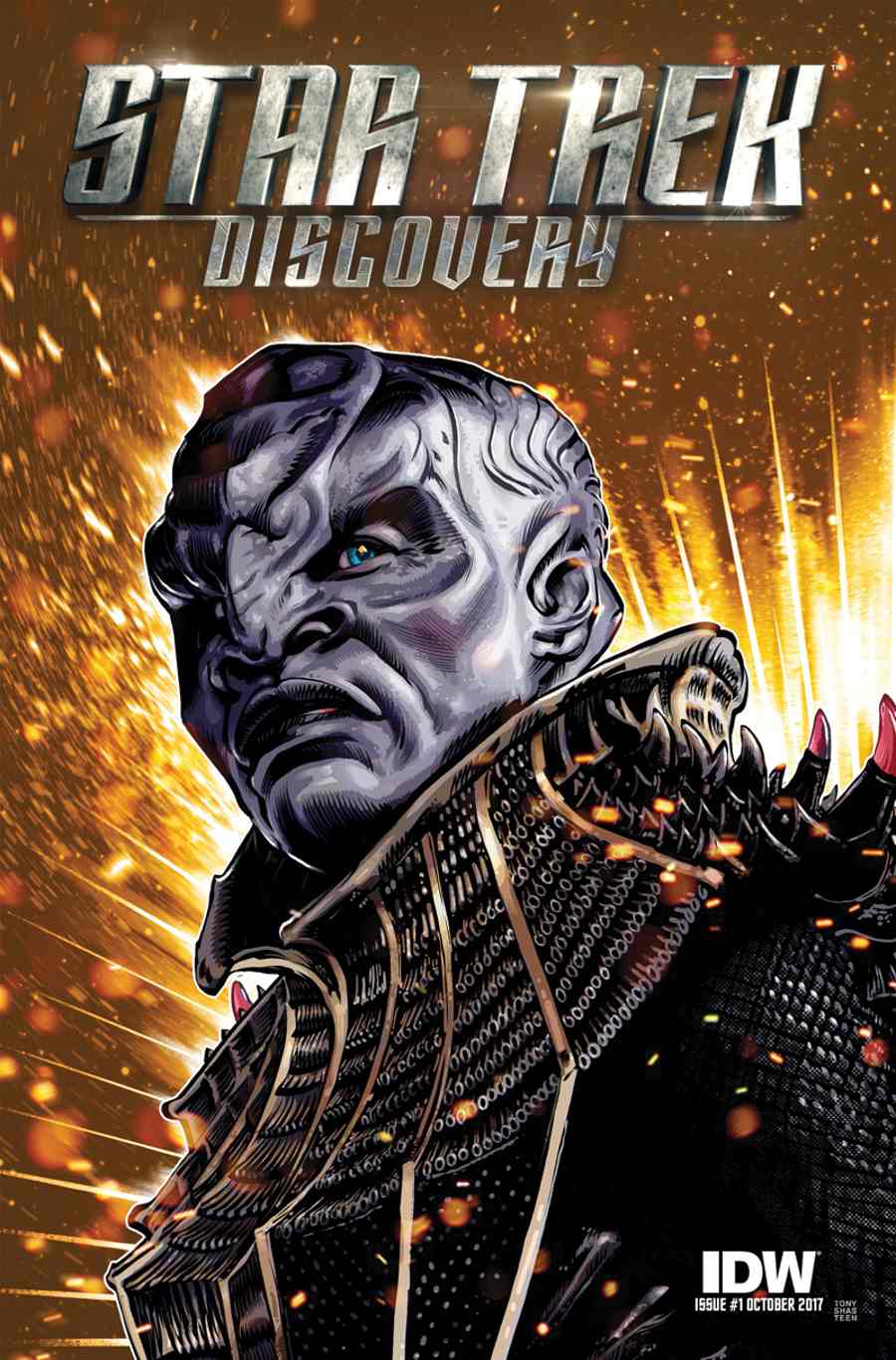 This was the Star Trek comic that I was really curious about. I really wanted to see how it would distinguish itself from the series.

Kirsten Beyer, Mike Johnson and Tony Shasteen is a combination of talents that does not fail to deliver with the storyline titled “The Light of Kahless”. Here’s the understatement of the year: it’s very good.

We all knew, going into the launch of the series, that the Klingons were going to receive a great deal of focused attention. Sure enough, this comic makes good on that promise and we see more into the life of T’Kuvma, who is a more complicated character than the show was ever able to display, in my opinion.

However, does this mean we have more respect for the Klingons on the show? Is the comic a harbinger of more things to come? Is it setting us up for a reconciliation after we learn more about how the Klingon character? Even though the focus of the show was on the differently-envisioned Klingons, this story shows us T’Kuvma’s motivations and allows us to understand him more.

So, in terms of distinguishing itself from the series, it’s a wonderful companion that allows us to understand the Klingons more and to actually see more of the similarities to the Klingons fans are used to than what was previously realized.

We see a character of deep resolve and humble origins. This is a hidden T’Kuvma who may give us a new perspective on this new Trek series.

I just wish I knew what the Klingons were eating in the first panel. 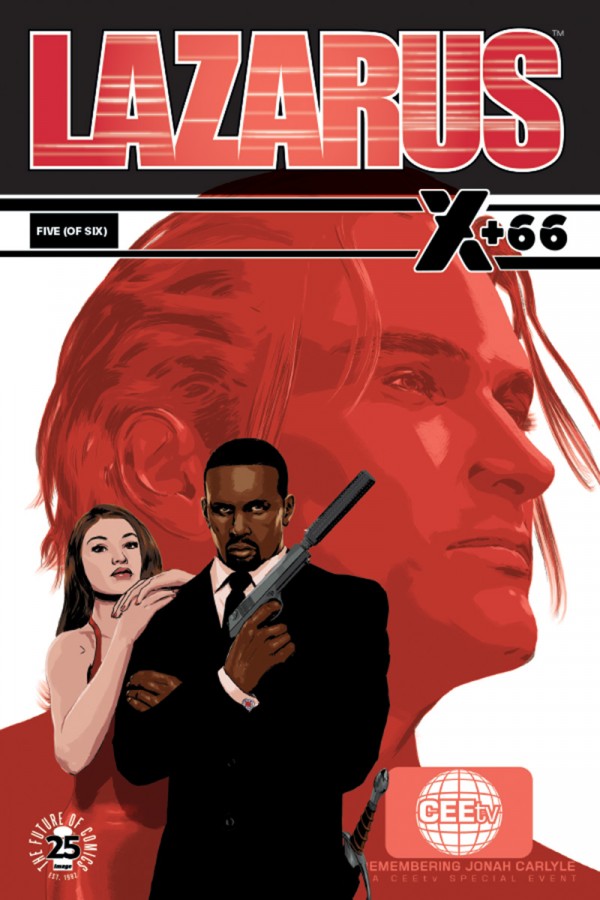 An absolutely stunning examination of another layer of this amazing society created by Greg Rucka and Michael Lark. In this issue, written by Greg Rucka and Eric Trautmann and drawn by the inestimable Bilquis Evely, we see the institution of journalism painfully and disturbingly portrayed under the absolute rule of the Carlyle Family. How does freedom of the press function if the family in charge of the serfs who work in this industry are subject to despotic rule?

However, we see its use for the families in charge. They either function as information-gatherers, providers of misinformation or unofficial channels of back-door diplomacy. It’s a fascinating warping of the Fifth Estate and a logical outcome for any profession under an oppressive regime. 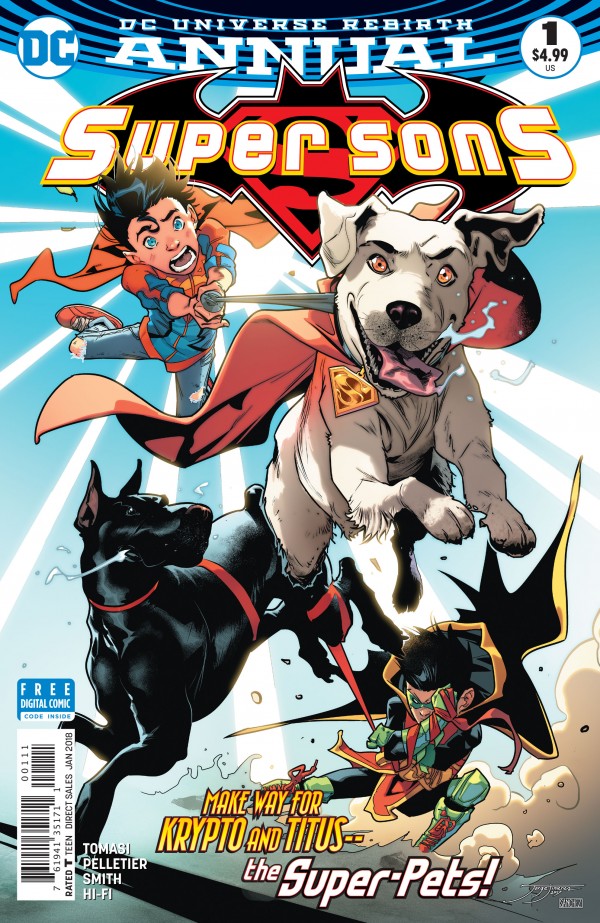 Yeah, maybe that’s not what you’re into when it comes to comics, but this entire series is meant for young readers and folks who have an appreciation for the young person’s perspective on life. This is a great opportunity to see life through their eyes.

But, this particular story is about getting the Super-Pets back together again. While it may be outside the realm of the two young super-young people, I have to confess it didn’t reduce its appeal.

The upshot is: Krypto, Titus and others, including the Detective Chimp and Streaky the Super-Cat all unite to unravel a massive wave of pet-kidnappings in the city. Why? Because the Super-Sons simply aren’t able to get around to it.

Sure, it’s a bit of a bait-and-switch, as you’re not really getting a Super-Sons issue, but it’s so damn cute, you can’t help but forgive. 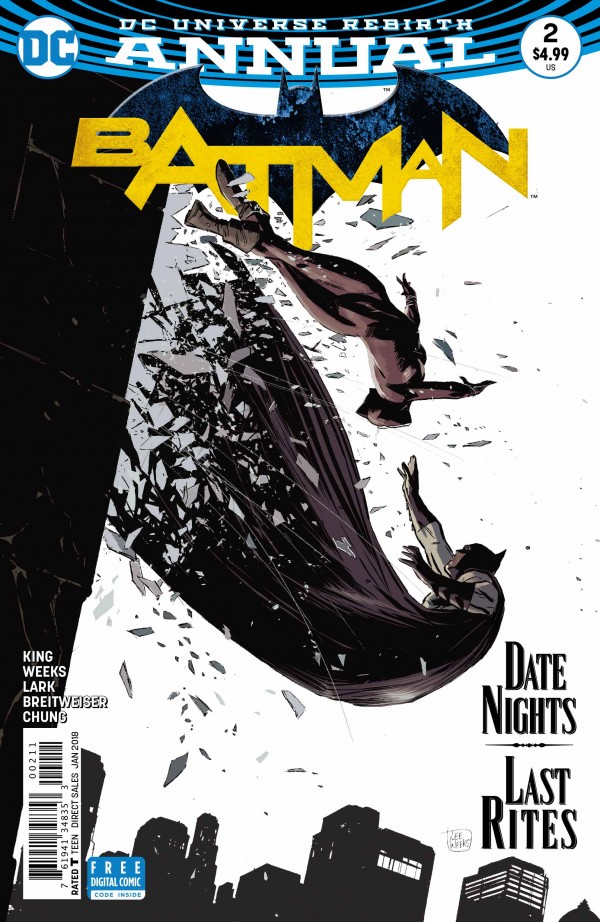 Just as I thought the man couldn’t make the strange romance between Batman and Catwoman any more romantic, he waltzes along and makes this soppy-eyed love story into a heat-seeking, love bomb that hits you right in the feels.

Maybe I’m just an old softy at heart myself, but I like this development of Batman. Batman doesn’t operate alone in the shadows anymore and it makes sense that he will need a companion in life, which is what this story projects.

It makes me wonder what the motivation is behind this line of storytelling. Why is Tom King focusing on Batman as a husband and lover instead of just being the Dark Knight? Not that I’m complaining, mind you; I’m really enjoying examining this extra dimension of Batman’s character and think it’s a refreshing take. We are seeing more of Bruce Wayne than Batman and I think that’s an aspect that has long been overlooked.

Traditionally, Bruce Wayne’s appearances were usually a façade. Bruce Wayne was the cover persona for Batman, and we saw him pretending to be the billionaire playboy philanthropist. We never really saw the real Bruce Wayne who was tormented and driven by the memory of his parents’ murders to become the Batman.

You know, Howard Chaykin once told me that this wasn’t a rational reaction for this character. After all, with all of the money at his disposal, why didn’t Bruce Wayne simply fund organizations or social institutions that could help reduce criminality or poverty in Gotham? Well, to be frank, because the comic isn’t about Bruce Wayne, nor about rationality. It’s a fantasy for little boys who want to be Batman and there’s nothing really wrong with indulging in that type of escapism. Let’s face it – this is also the character’s own escape from grief. He’s still a little boy who wants revenge upon the criminals who killed his mum and dad.

King brings a little bit of rationality to this character by giving him a love interest who is more invested in assuring Batman’s happiness and giving him a way out of this life. He is still only human and unlike his counterparts, there’s only a few years in which he’ll be able to continue his war on crime. He needs this relationship to escape his self-indulgence.

He makes Batman recognize his own humanity and I like it a lot.

… Enough to make it the pick of the week for this week’s allotment of comics. King is no stranger to this weekly accolade; he’s had it bestowed upon him before and at this point, it must be old hat to him.

But here’s my take: there are layers to this guy that are revealed in his writing that don’t come out in brief encounters. His storytelling sparks questions and I definitely want to know more about him. Of course, like any other good writer, he’d probably say: “It’s all in my writing – just read”, but we’ve talked about him enough in this column, I think it’s time that we actually talk to him. Yeah … we need to interview Tom King.

Now how’s that for creating a sense of anticipation?

Pick of the Week: Batman Annual #2