Let’s face it: it’s not like we lead second lives, have secret identities or are the heroes in some grand adventure. But in comics, we can. Reading comics allows us the vicarious, albeit brief thrill of borrowing those features and losing ourselves in a fantasy with values that speak to our natures. You know, the ones we hide because of our mundane lives?

Yeah, well, let’s get to the list for this week.

The cover was a bit misleading. I was of the impression that there would be more cooperation between the Penguin and Batman in this story, but the end was undoubtably a surprise that will delight and shock other readers too. The conflicting information that Batman has been getting to this point about Bane’s current state of mind is frustrating the Dark Knight. His campaign through Gotham’s Underworld has been brutal and relentless, yet I would have thought that the childlike Bane’s sideways glance in the last issue would have confirmed his duplicity. Regardless, Batman is driven to finding the truth, never mind how many noses he has to break to get it.

But it’s the surprise ending that’s the draw for this issue. It has me thinking about other ramifications but this story does a very good job in illustrating the determination Batman has in pursuing a goal to the end. 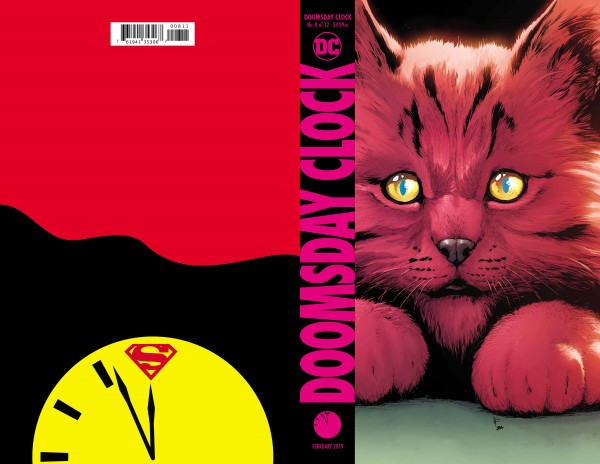 I am definitely mesmerized by this conclusion to The Watchmen. It plays with the previous book very well, but is it a worthy successor? I don’t know for sure. I mean, it’s got the same tone of desperation and recklessness that was in The Watchmen but I think it needs more mention of the multiverse to be taken more seriously.

Right now, it has bits and pieces of the Watchmen, to give it that same flavour. But more explicit material connections to the original text would be more welcome, in my book.

Still watching the drama unfold in this story is still enough to make me pine for a secret identity.

Dale Eaglesham … I’ve been a big fan of this guy’s artwork for the longest time, and for me, any book with his pencilling is the major draw.

The story, by Geoff Johns, has a bit of a schmaltzy, family vibe, which Is ironic, given that the new Family Shazam are a bunch of displaced orphans living in a foster home. However, it’s a reassuring note to see that with the inclusion of the other orphans into the family, Billy Batson no longer has a chip on his shoulder.

Of course, very little happens in this issue. It’s a set-up issue, designed to introduce us to the family, the dependent characters and a minor story development. Clearly, it’s designed to set readers up for the upcoming movie and gives us an instant set of characters and expectations to identify. 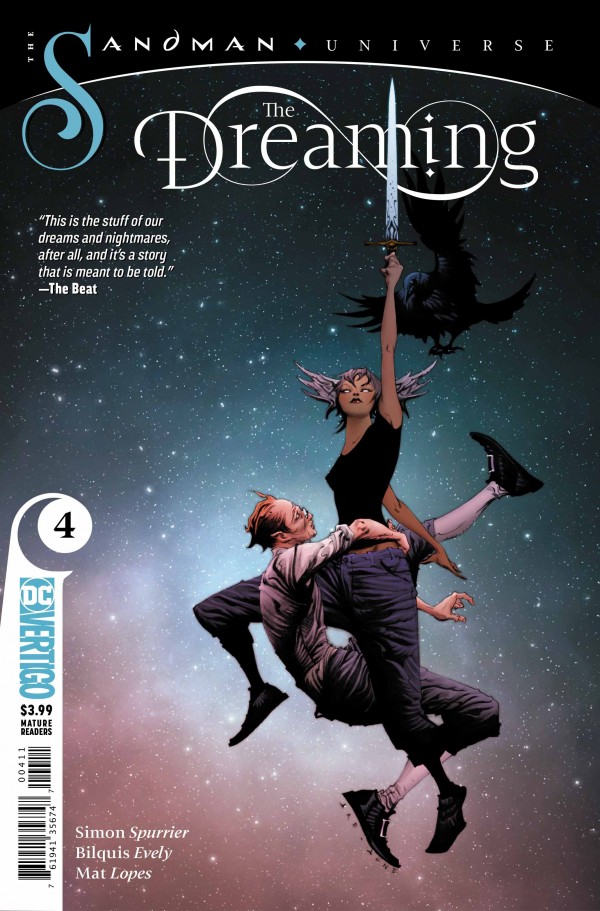 This is the book I look forward to every month. I enjoy getting lost in Gaiman’s realm of the Dreaming and I have the dynamically talented Bilquis Evely and Simon Spurrier to thank for it.

Spurrier has the ability to wave a metaphor like it was a magic wand. The Dreaming is home to figures of our imaginations who are vying for a greater shot at existing in this land of half-formed concepts and ideas. Lucien the Librarian is hard-pressed to keep the kingdom together instead of it fraying from all of the stress of the uncontrolled maelstrom of creative energy.

Lucien is just a servitor though. He knows he needs a champion and, in this issue, we see the possibility of a new ruler emerging.

Rooted in nostalgia, this is one of my new favourites. 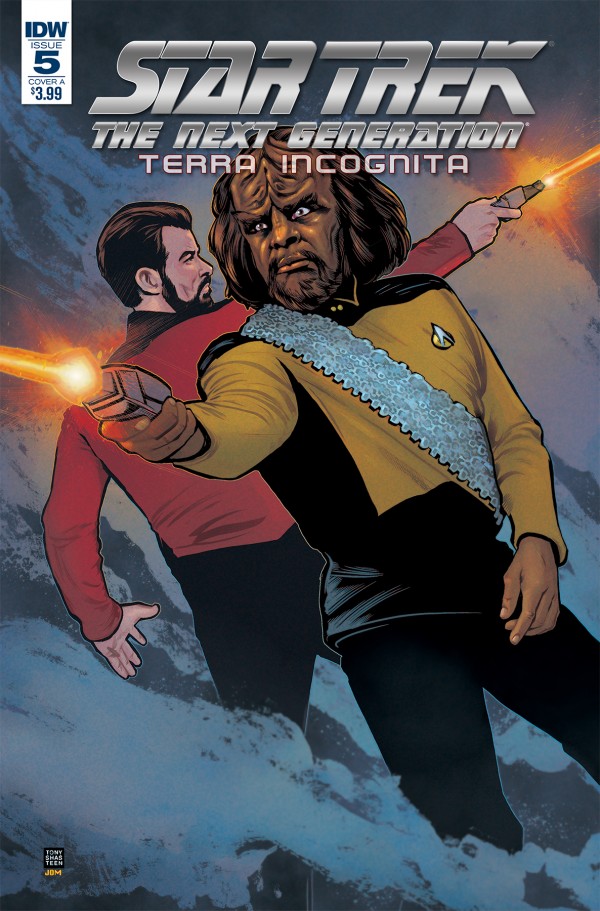 Scott and David Tipton are immensely talented Trek writers. I’d like to be them when I grow up.

I was wondering when we might get to see more evidence from the mirror universe! Granted, I’ve been content to enjoy the Tiptons’ foray into TNG with the spectre of the “negative” Barclay looming in the shadows. Reading their made-for-tv stories makes us forget about this back story that we first saw in the series “Mirror Broken”.

The last few issues have been independent stories. Completely contained, they feature focus roles on various members of the cast. This not only makes it more enjoyable (Hey, everybody has their favourites, right?) but it also adds a degree of authenticity by making it seem more like a television episode than a comic. However, they act like “lilypads” as we frog-hop from one story to another with elements of the mirror universe story in the background in each issue. It’s a very clever technique.

Other than being a natural TNG Trekfan’s delight, this explores the alternate universe to a degree that hasn’t been seen before. We’ve seen the mirror universe in TOS, DS9 and in ENT, but to have it visualized in TNG is a great thrill. I really enjoy the Tiptons’ take on these characters.

This is a true “feel-good” story from Mark Waid and Jesus Saiz.

We are so used to seeing Stephen Strange deal with eldritch forces and denizens of other dimensions that we often forget that he’s a human being too who creates bonds with regular folks and lives in a neighbourhood as well as defending the earth from magickal threats.

First of all, this was refreshing from that perspective alone. I like to see Strange with friends. It not only makes him more accessible, but it makes him human. After all, he’s not just protecting the world, but he’s protecting his street from a very real and down-to-earth threat: the concentration of urbanization.

Second of all, there’s a humour to this issue that also takes the stuffiness out of the Good Doctor. It’s refreshing and makes for a true human drama. 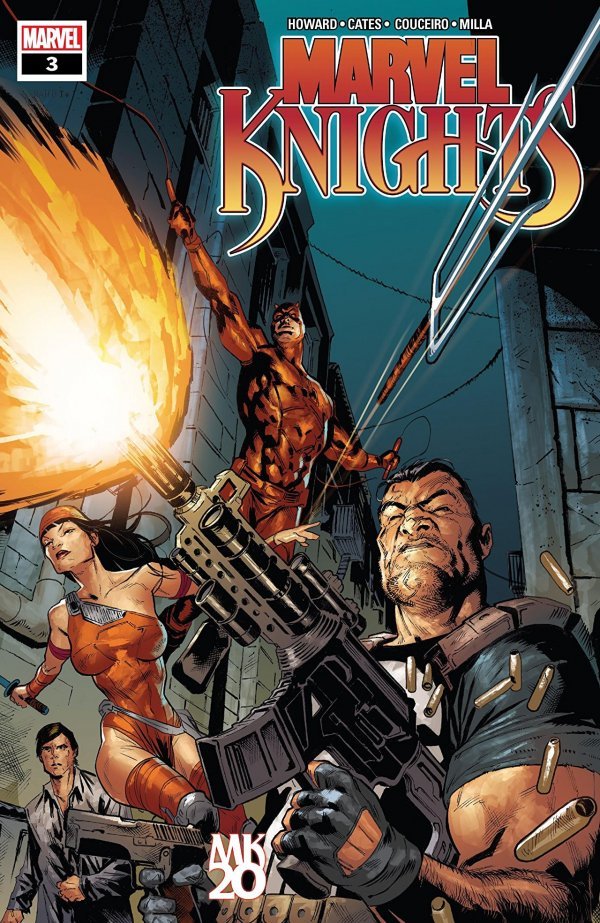 If there’s anything that this story from Donny Cates, Tini Howard and Damian Couceiro have crafted for us gives me, it’s an unbridled sense of curiousity. I am so driven to find out how these heroes will manifest themselves in this reality and how they will eventually find themselves.

I truly like the detail that Cates and Howard put into the heroes’ new backstories. I find that Frank Castle’s particular backstory is one that I would like for this character to have. The Punisher is an unrelenting avatar of vengeance but it has to be an exhausting battle, not just physically, but spiritually.

This version of Frank Castle sees him as a police officer; dispensing justice but with restraint and reason. He has a wife who he returns to at night and a chance at happiness dreaming about the family he used to have in his other incarnation. I have to say, I like this version of Frank for Frank and if I’m sympathizing with the character to that degree, then Cates and Tini are doing something right. 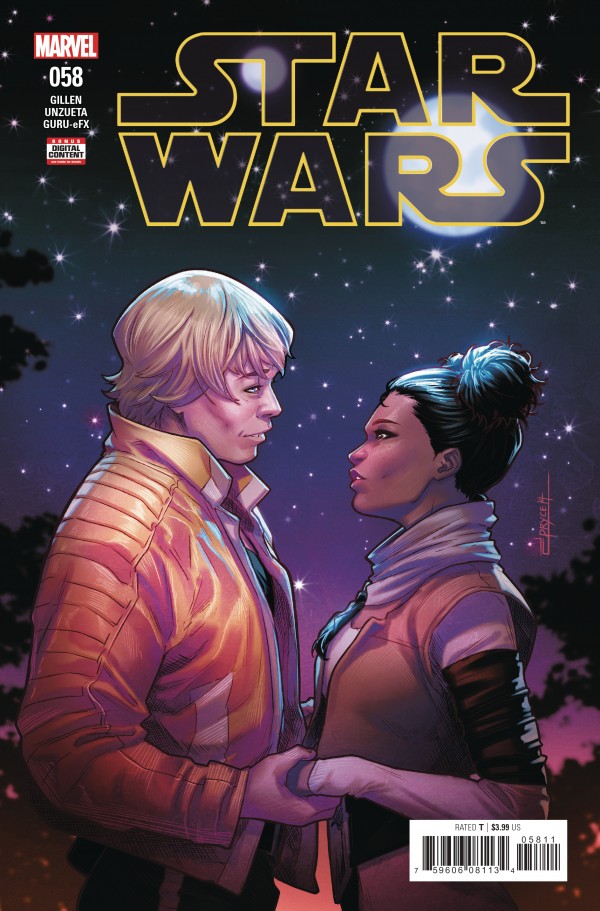 I think it’s the way that the characters interrelate to each other so effortlessly. The dialogue isn’t forced – it is completely natural. Han and Leia are at the beginning stages of an early relationship while Luke is still a naïve farmboy, even after destroying the Death Star and already a veteran of many starfighter campaigns and encounters by this issue. Thoughts of true romance are barely on his horizon, yet they are still there, framing his adventure with a tinge of excitement that only young love can elicit.

But I also love Star Wars. I’m first and foremost a Star Trek fan though, but while Trek has philosophical values underscoring a lot of its stories, Star Wars is reckless fantasy in which one can wholly lose himself without worrying about the nuts and bolts of space travel. Not to say that sci-fi accuracy isn’t valued, but Star Wars isn’t a sci-fi; it’s a romantic fantasy in which the heart rules over the head.

I tend to think a lot like this. I like to believe I’m primarily an academic, but I think I’m a fantasist at heart too. Star Wars satisfies that love in me and I can see it in this comic. Loyalty, dedication, and faith; those are the values that I see epitomized in the relationships that Gillen emphasizes when Luke spars with Thane Markona or when Leia and Han have their private moments of innocent familiarity. These lead to heroism and sacrifice which pave the way to adventure. This is authentic Star Wars and I hope that the reason why I enjoy this comic and the franchise so much is because of the resonance those particular values have for me.

Star Wars #58 is the pick of the week for this week. It’s a story that is easy to lose yourself in and it has a joy, that, if you’re like me and dream of being a hero, then this is the book for you.