I think the most endearing value of the Star Wars franchise has been the heroes.

We’ve seen the relationships between these heroes over the course of its 43-year expanse. The best stories include closer examinations of those relationships – the friendship between Han and Chewie, the love between Leia and Han or Luke’s absence of and need for a mentor to help make sense of his knowledge of the Force. These are some aspects that greatly add to the romance of Star Wars and, in my opinion, it’s the period of the original trilogy and just after when these things really shine.

But in a franchise as vibrant and memorable as this one, there’s always room for more heroes. 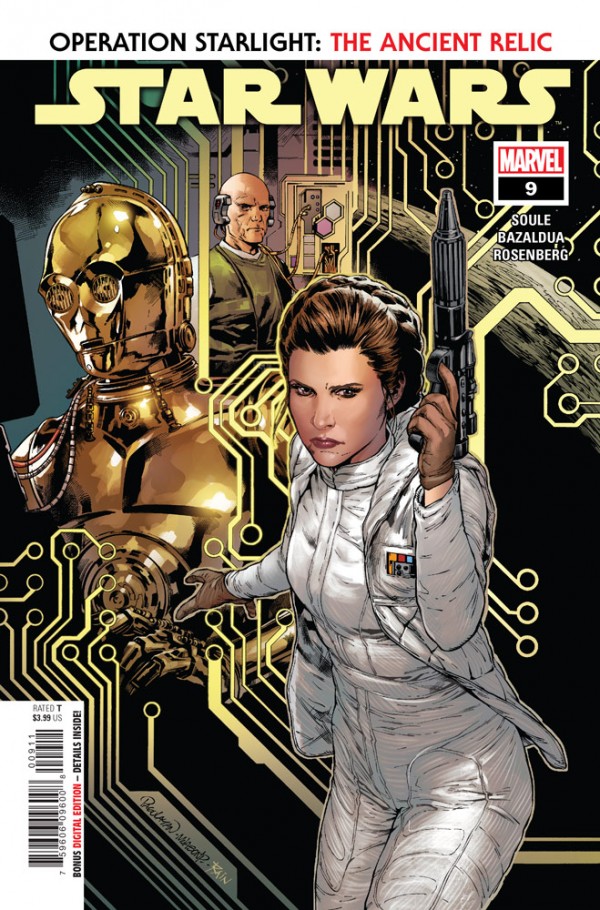 Because of the need to find an old precursor protocol droid that has the only record of a lost language the rebels must use to transmit coded messages, we get introduced to a new team of Rebels, known as the Pathfinders. Low-profiled and experts at infiltration – with a little help from a familiar smuggler friend, namely Lando Calrissian and his former aide, Lobot, the Pathfinders make their way to Coruscant and to the Imperial (formerly, the Galactic) Museum on Coruscant, seat of Imperial Government.

New characters, like Frell, Kes, and Needle are new additions to the pantheon of Star Wars heroes. Much like the new additions to The Mandalorian, Soule is showing us that there is room for expansion to this pantheon that can add not only entertainment but a new level of enjoyment in the sense that new characters that fit into the existing milieu are what long-time fans expect as well as what new fans can enjoy.

I love that Charles Soule is putting his own stamp on to the Star Wars universe. There’s plenty of space for creators to add to the lexicon of Rebel/Republic heroes and imperial villains, and, in fact, I think this is something that I would expect. After all, if you’re going to give creators of Soule’s calibre the chance to play in this universe, then they should have the opportunity to leave something of theirs behind when they’re done and off to other projects. Look at Grand Admiral Thrawn for instance: the creation of Star Wars novelist, Timothy Zahn, now Thrawn is a mentioned character of great anticipation in The Mandalorian.

(Oh, and if that was a spoiler … sorry, but COME ON! It’s the Internet, people! I’m betting everyone who reads my column is the same audience who would have already seen this and freaked out about it by now!)

This story isn’t so much about the event. It’s definitely important in terms of setting up for an arc that’s definitely going to be a lot of fun as Soule continues to explore the time between Episodes V and VI. I think it’s more important to showcase some of these new additions to the Star Wars Universe that I think we are bound to see more of in the upcoming issues; at least the next few issues, I’d say. I’m completely on board with that. New discoveries that make my favourite parts of Star Wars better? Yeah, I’m over that like a Jedi on a long-lost holocron.

In terms of the art, I’m becoming a fan of Jan Bazaldua’s work. Of course, I’m not downplaying the stunning cover by Carlos Pagulayan. In fact, it completely reinforces the opening panel where we see General Leia Organa, resplendent in her Hoth battle-dress, standing in a defiant pose which both fully convey the greatness of this character. Probably one of the best and well-known female lead characters in this genre who not only was a leader but was freely accepted as one. Bazaldua’s presentation of her in this panel reminds us of these leadership qualities and why everyone loved her so much. She was a fighter, a leader, a politician and a hero in every sense and this art reinforces this so well.

This is a hero-building book, plain and simple. It’s the best aspect of this saga because we need our heroes to entertain us, and, frankly, to give us hope. We relate to the elevated notions of sacrifice and dedication in this story and starting the dialogue with hope is probably the best way to start the book because these heroes are the epitome of the hope we need, especially at the end of 2020 when the light is appearing at the end of the tunnel. This comic may have been published in 2020 but it gives us heroes to remind us that the end is near.

Star Wars Issue #9 is definitely my pick for this week’s comic run. I hope it’s yours too.

Pick of the Week: Star Wars #9