This week’s theme is taking care of business.

Yep – pretty simple, isn’t it? Sometimes it’s best to boil life down to its essential elements and so it is in life, as it is reflected in comics. There’s a great deal of comfort in getting things done and this week, there are characters, villains and titles who all reflect this idea. It’s a good thing to take inspiration from those notable characters who we love to read about. So, without any further ado, let’s get to the list. 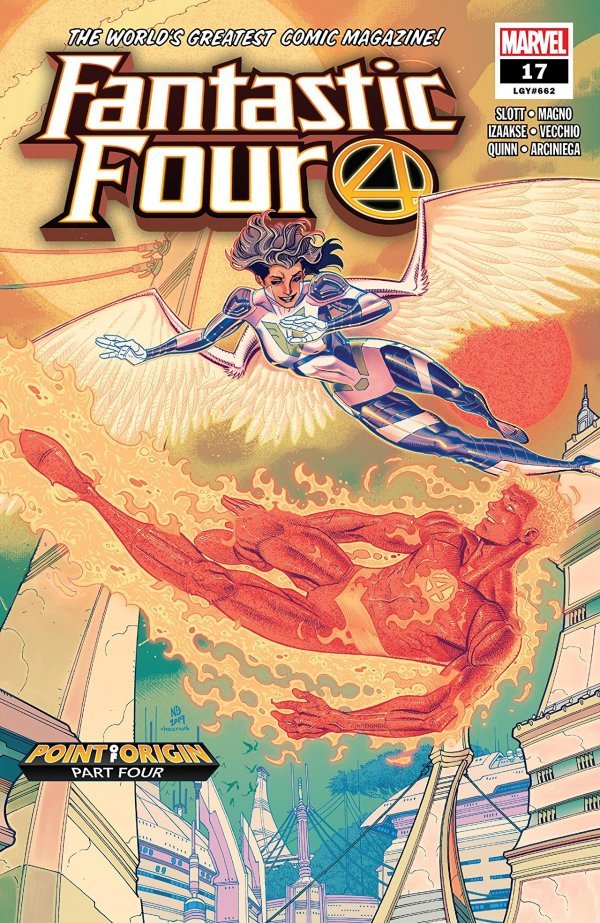 I admire Dan Slott’s character. He’s a guy who does the right thing. If you’ve ever met him, you know he’s genial, funny and very caring with his fans, and that’s what comes out in his writing. That’s the type of regular business you can expect from this guy and this storyline is seriously killing it.

Full kudos to the team of artists on this book: Luciano Vecchio, Carlos Magno, Bob Quinn and Sean Izaakes. Their renderings of the team are not only exciting but make it a fully engaging story. It’s candy that fills you with a sense of satisfaction.

Not only do I enjoy that the Fantastic Four are reaching back to their roots, but it’s also a reminder about how they conduct themselves. They are some of marvel’s oldest heroes, but their nature and personalities remain consistent and Slott ensures that.

As the Four venture continue to hide out from the Unparalleled, the planet Spyre’s native superhero team who have been preparing for the return of the Fantastic Four since their first arrival, we see their innate personalities show themselves. Johnny Storm’s impulsive nature and reckless willingness to trust; Reed Richards’ firm commitment to doing the right thing, Sue’s supportiveness and Ben Grimm’s readiness to stand up for the disenfranchised little guy.

Ben has a revolution comprised of the denizens of Lowtown, the misshapen freaks he can relate to and Johnny is soul-bonded to one of the heroes who is pursuing the Four. There are exciting and wholly entertaining complications to enjoy in this story but what really is enjoyable is Slott’s respective and creative way of representing these iconic characters. He really is the guy to write this story. 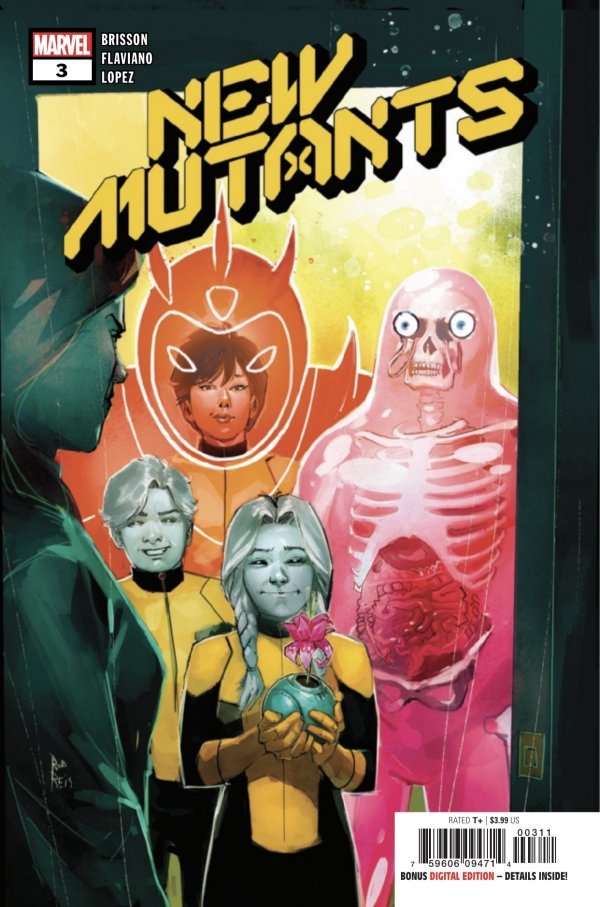 Back to Jonathan Hickman’s New Mutants with Ed Brisson scripting this installment and Flaviano providing the scintillating artwork, this is a series that has desperately needed some careful attention to business for a long time. Now, with Hickman’s “grand unified Mutant theory” in place, maybe we’ll see some great stories around this past favourite team of super-powered youngsters.

In this story, we take a break from the missing mutants in space to locate some of the missing mutants on Krakoa. Given that there was a wild proliferation of mutant students at Xavier’s in the 90’s the trick now is to be able to reconcile them all. Granted, a large number were killed off in the “NO MORE MUTANTS” aftershock of “The House of M”, but that still left a number of characters to write about.

Sure enough, that’s Ed Brisson’s task. Mutants like Beak and Angel Salvadore are still missing and aren’t able to enjoy the Mutant Paradise that Krakoa has become.

This is a true “Taking Care of Business” story, in which there is finally a home for Mutants, but more need to be brought back to the fold. It’s solid, entertaining but Ed Brisson never fails to disappoint. 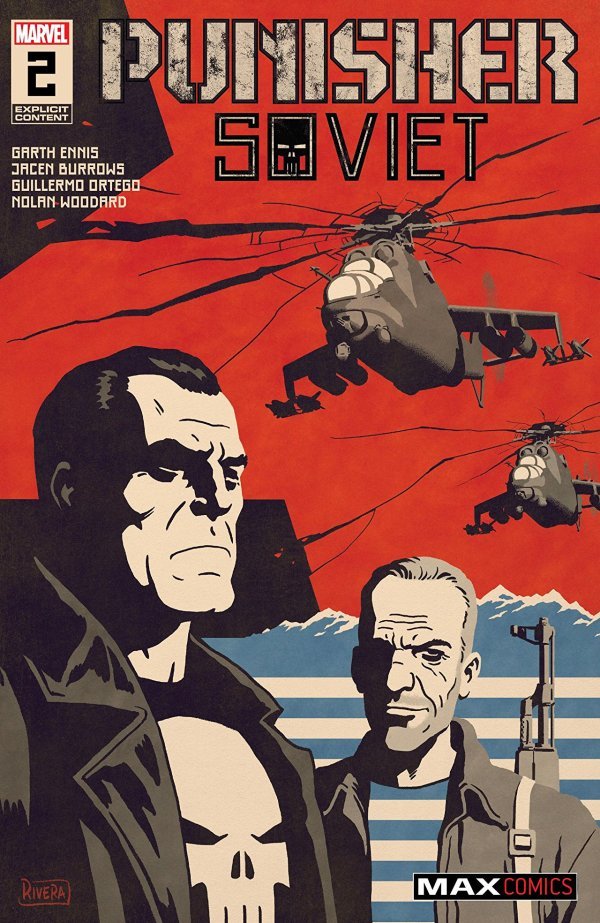 Man, I love Jacen Burrows’ art. If there’s ever a guy whose work I want to add to my collection of original stuff, it’s definitely him. Solid lines, great detail – his work is always thoroughly compelling.

Then there’s Garth Ennis, whose expertise in militaria, and his stint with this character before, arguably make him the most qualified writer to craft a story about the Punisher. But, this time, it’s not just our Punisher, but a new version of himself, Russian-style.

I love how Ennis compares these two characters with similar backgrounds: their penchant for precision violence, their military bearing and their calm ability to assess tactical situations and respond immediately. While we see it, Ennis also subtly communicates to the reader that the characters are aware of it. That comes out in the contrasts, like the Russian Valery Stepanovich’s sense of humour. It’s detailed character interaction with the exotic background of the Russian criminal underground very engaging.

But, the one thing these characters have in common is their willingness to do the job, whatever it takes. We still need to learn more about Stepanovich’s background, but you can bet, it’ll be a shared approach to taking care of business, the Punisher way!

Definitely one of my favourite new comics. Can’t wait for the hardcover! 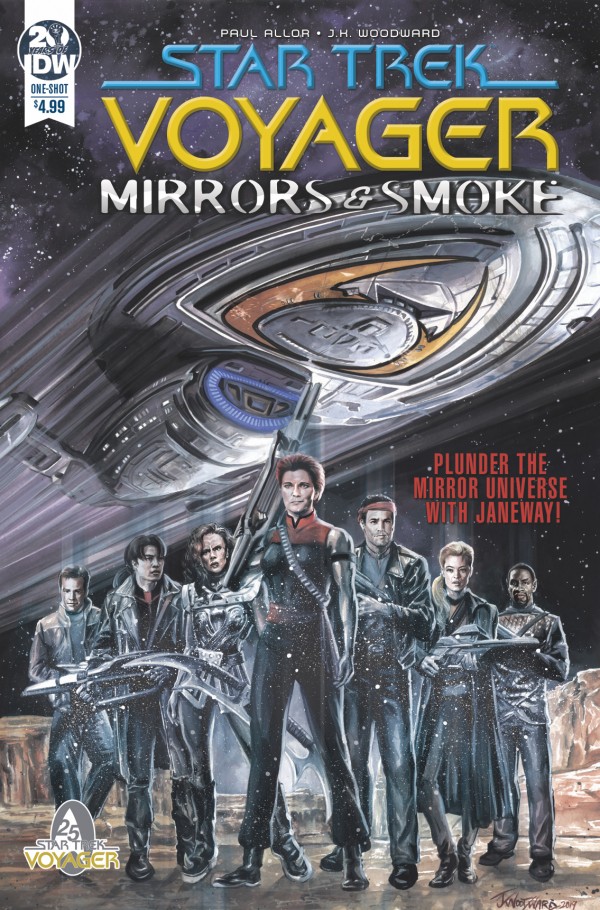 Well, I can’t resist a good Star Trek story, and sure enough, leave it to a veteran Trek artist like J.K. Woodward to continuously deliver the artistic goods in a reliably high degree of excellence. When you stand for excellence, that’s taking care of business, for sure.

The premise for this story is Voyager’s duplicates in the Mirror Universe of the Delta Quadrant, capitalizing on the success of the other Mirror Universe titles from IDW. The Borg are unknown, the Voyager is a freebooting pirate ship intent on looting as much of the Delta Quadrant as it can. Why bother going back to the Empire, beset upon all sides by its enemies and destined for an unsustainable and eventual demise? Enter Pirate Queen, Katherine Janeway and her band of reprobates.

Paul Allor’s work is new to me. He gives us a decent rendition of the Mirror Universe Voyager crew and how they’d behave. This is an entertaining story to read set within a universe Star Trek fans would like to imagine. It’s fun and a good piece of work, reflective and responsible to the franchise.

I bought this for Woodward’s art. I can’t resist picking up a book with his painting. He’s one of my favourite artists, and I especially love his work in Star Trek. It’s more than striking, it’s emblematic and the fact that it is painted with such an intensively fine degree of accuracy that it really needs to be seen. I know I’m going to be looking for selections of this for sale on his website. 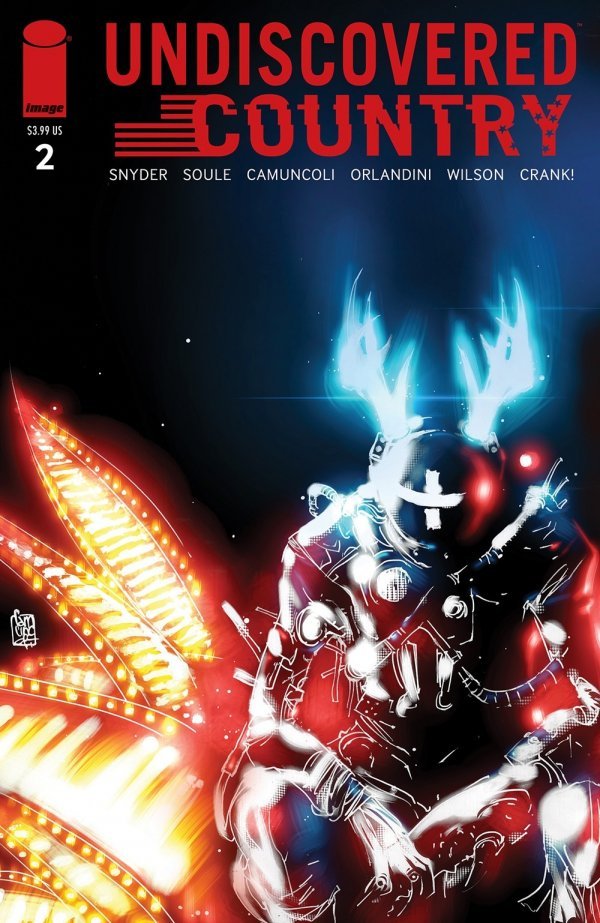 Charles Soule and Scott Snyder are the type of responsible writers who not only exemplify the practice of their craft, but their understanding of it. It’s clearly seen in their partnership in the creation of this stunning comment on the present status of the United States in world society and its role as well.

Now there’s some business to take care of.

It’s the future, the world has seen better days and is threatened by a deadly plague and absent from the world stage is the United States that cut itself off from the world decades before. Then, a signal, inviting diplomatic representatives into America for the first time in years is received, and the rest of the world, desperate for a cure to the plague, enthusiastically responds.

When the diplomatic team arrives, they discover an America completely different from the one they remember: genetically modified creatures, mutants, beings imbued with strange metaphysical powers and different tribes and factions competing to gain access to the land that seems separated not only by distance but by different dimensions.

It’s a stunning premise that’s supposed to take us by surprise, and as a long-time reader of comic literature who’s seen pretty much everything that comics can throw at a reader, this ranks up there with the likes of a creator like Jonathan Hickman or Joe Hill. In other words, it’s weird enough to get your attention and start thinking about its significance.

I love how Soule and Snyder include notes and annotated material at the back of this book because it’s the insight into their partnership and process that really is the “taking care of business” I alluded to at the start of my review. How someone creates on their own is usually a mysterious process, but being able to outline the creativity, the challenge of portraying a particular character or scene is a draw for me. Yeah, I used to be one of those kids who was really curious about the people behind the stage instead of the show sometimes.

But I’m sure anyone who loves a good story is also curious about how that story is assembled. That’s what Soule and Snyder give you. At the end of this book, Scott talks about script hand-offs, conversations over the phone, notes taken and all sorts of shared storytelling practises that describe the partnership to interested readers like me.

It’s also cool to garner the implied sense of understanding between the two creators as well. When Scott described his excitement over the largest release in Image Comics’ history, and how he freaks out over the response (talk was made of fleeing the country), it’s Soule who calms him down. The emotional dimension to this working relationship is also intriguing to read about as well.

In his notes, Snyder is quick to share to share the creation credit with his team: artists, Giuseppe Camuncoli, Daniele Orlandini, and colorist Matt Wilson and letterer, Crank. The success of this book is attributed to the team effort that has gone into the book. It’s a dazzling art. The switch between near paleolithic drawings and exotic technology wielded by the Destiny Man in his Rolling City is one that requires a lot of skill to place beside each other, but these artists manage the contrast amazingly clear without sacrificing any definition. You see the story’s nuances perfectly collected in this art.

Taking care of business is a phrase that is commonly used to reflect the completion of dull tasks. In this case though, I am talking about the underlying principles that reflects: care, responsibility, effort and duty. To me, “tcb” is about quality work and “Undiscovered Country” is exactly that. The growing distance between the United States and its world partners is growing far and fast in contemporary times. Other nations who used to be in step with their American ally no longer know or even trust her.

America. Where are you now? It’s in the Undiscovered Country and it’s the pick of the week for this review.

May your tasks be few but filled with a sense of accomplishment! Until next week!

Pick of the Week: Undiscovered Country #2