Acting without thinking is normally not a good course of action, but sometimes, you gotta fall back on unmitigated rage to see yourself through a situation.

I mean, this week, though it’s only the middle, has seen a great source of rage and in all honesty, it was unbridled anger, you know the type the Sith use, that saw me through. 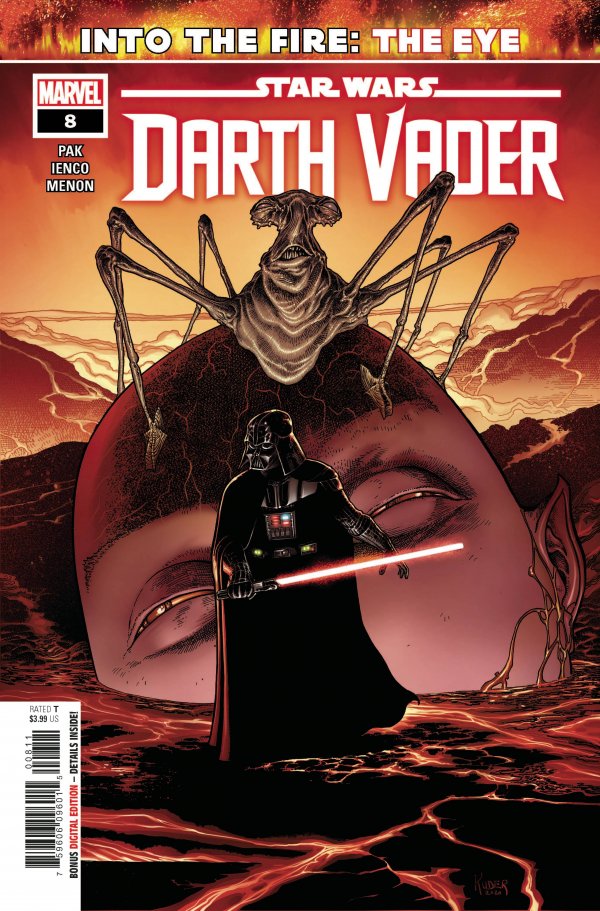 You see, here’s the attraction to the dark side of the force. Anger, revenge, power – all those things that we are told are bad, sometimes have a use. Perhaps I’ll lose my Jedi Temple privileges for stating this, but there is not only something satisfying in harnessing these emotions for a purpose, but also inwardly rewarding.

You see, I’ve always prided myself on my sense of patience, mercy, forbearance, and my diplomatic ability to not say something when something need not be said. These are definitely Jedi traits, right? Hey, maybe Jedi are Canadian? But, to be frank, when tactically used, for a specific purpose, it can make you a formidable foe.

The story so far: Vader has been punished by his master, the Emperor, for his feelings for his former lover, Padme. Sent to Mustafar, the place of his creation, he has been crippled, disarmed and hunted by the Sith Assassin, Ochi, Vader now finds himself taunted by some force that draws him in. He needs to remember the ways of the Sith – namely: rage, anger, intimidation – if he is to survive the Emperor’s punishment.

There you have it. That’s the vibe I was looking for this week. I mean, I’m not given to losing my temper, but this week I learned how powerful a force (no pun intended) it could be in accomplishing one’s goals.

Greg Pak fully understands this vibe as well. In the last few issues, Vader challenges his rage towards his survival, utilizing his skills learned in his younger days as Anakin Skywalker, by attaching scrap droid parts to his bionic limbs. Even after losing an arm and two legs, he is still able to recall every scrap of knowledge he needs to survive. Of course, some may say this is pure inventiveness, but it’s imagination borne out of a pure indomitable rage that propels him on survival.

It’s interesting how Pak taps into this. You see, we’ve heard so much about how the Jedi use a sense of peace and calm to fuel their powers. However, the Sith use power and anger to provide for theirs. They really aren’t opposites; just … different. In the end, they both provide a source for their powers. In this issue, it’s the force (no pun intended) that provides for Vader’s stubbornness and refusal to quit, despite the odds.

If this was a Jedi character, we would praise him. In Vader’s case, we just simply see this is as a facet of the Vader legend. But it’s more than that. Vader is a hero in this story … one who is on a quest to recover himself.

We see this so clearly in this story. That Vader is able to tinker spare parts for his cybernetics is an aspect of the boy we met in Episode One. In this book, Vader is still plagued by thoughts of family, of the son he doesn’t know and who he is in relation to the Emperor. We still see the shadows of the person he was draped in the ragged remains of the pursued prey he is. Yet, despite being the prey, Vader still manages to remind his hunters that he is no normal prey.

Pak is selling raw emotion in this this book. Vader is a force of unnatural nature. His anger not just powers his abilities, but is the smoldering energy that allows him to juxtapose the person he once was into the fierce Sith Champion of the Emperor. But there is a power dynamic in this relationship that shows that Vader isn’t all that powerful – he still remembers the man he used to be. The loves, the friendships, the family he never knew he could have – all of these and while this shows a short-sightedness on the part of Anakin Skywalker, it also reveals insight into the complex characterization of the Vader that we eventually see in Episode VI, in which the man, the father remembers who he is supposed to be – and that gives me faith in the power of dark rage.

I’m really starting to love Raffaele Ienco’s work on this character. He has the knack of using posture to demonstrate Vader’s state of mind. Of course, there’s very little to work with when your main character is a mask-wearing, rage-filled armoured giant of intense rage, but somehow Ienco manage to not only convey Vader’s determination against greater numbers, but he also displays Vader’s sense of vulnerability.

I was expecting more from the Eye of Webbish Bogg, to be honest, but I’m sure that this is an introduction that will yield more opportunities to learn more about this intriguing character. While not revealing spoilers, I have a feeling that this character will have more of “Yoda-like” function in future issues. I’m looking forward to more.

Still, this book is a testament and a source of greater insight into how the feelings that we know as the lesser feelings – rage, selfishness, intimidation, etc., can actually provide motivation in situations when the odds are against us and we have nothing left but ourselves to rely on. Vader may be the greatest cinematic villain in the 20th and 21st centuries, but in the end, he’s only one man and how he can rely on himself is maybe a lesson for the rest of us.

Hell … this week? Yeah, it was definitely a lesson to me!

Star Wars: Darth Vader #8 is my pick for this week’s comic review, and I hope it’s yours too.