You know, this is the not just the season for giving, but it’s the season for planning. I mean, at this time of the year, you put together lists, make appointments, arrange to see friends and family – it’s all one huge sequence of elaborate planning.

So, of course, that’s the theme for this week’s list of comics! Without any further ado, let’s get to the list. 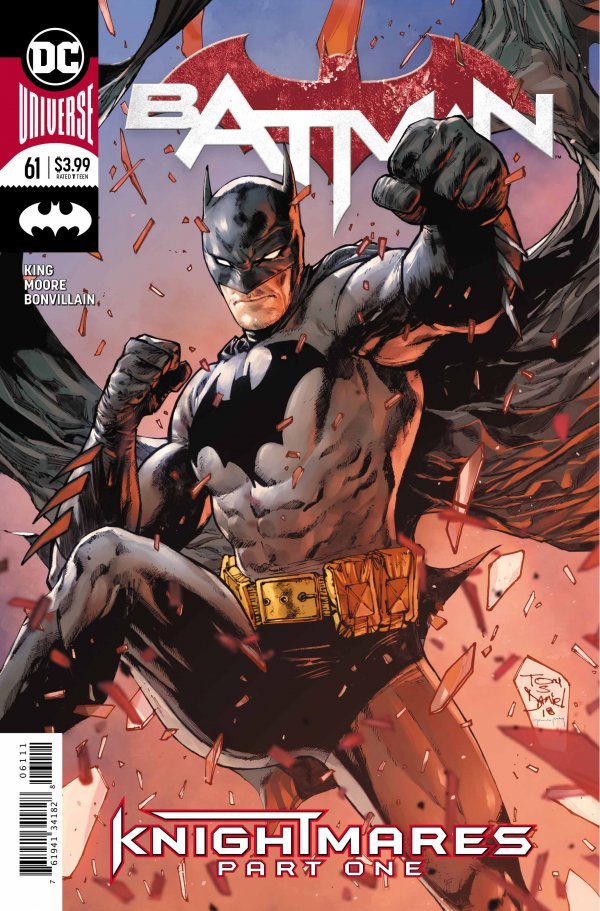 Tom King has been quite excited about this arc on Twitter. Titled, “Knightmares”. There’s a real sense of enthusiasm in concocting this master plan that comes out in his tweets.

If readers will remember Issue #37, we were introduced to a character known as “Master Bruce” – a boy of wealth who murdered his parents in order to identify with Bruce Wayne. In “Knightmares”, we meet him again as we scurry down a rathole of twisted dreams.

Even the Dark Knight can’t withstand the onslaught of the shadows of the mind. This is the first in a salvo of concentrated mental attacks designed to bring down the Batman. King has already hinted at this notion in his tweets, describing the arc as a series of one-shots that all eventually lead to answering the question: how do you break the Knight?

Travis Moore guests as the penciller of the art for this book. Definitely appreciable art and with Nightwing in his previous credits, this comic is definitely a book that he can bring a lot of value and fun. To, though I think most of the fun for me is trying to anticipate the answer to that question before I get to the end of the six-issue arc. However, “Master Bruce” is a brilliant way to start the ball rolling. 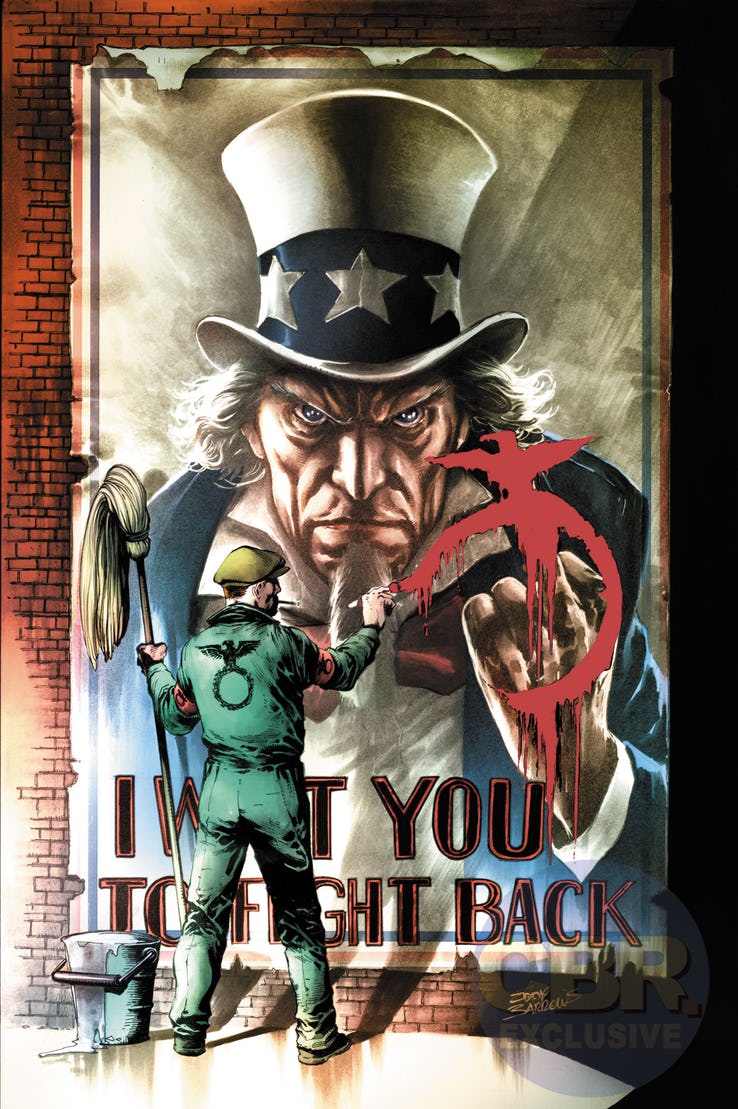 An amazing revisit to an awesome concept that really didn’t get enough love in its original incarnation. If there’s anything I love, it’s the intermingling of different realities and playing “what if” with different historical alternatives. I mean, there’s nothing like different outcomes to make you appreciate the formulation of original plans.

In this case, we get to see the United States under the heel of Nazi occupation. The original Freedom Fighters have failed in their quest for liberating America and even heroes like Jesse Owens have been taken prisoner and publicly reduced in stature.

It’s a timely book, I think, when a former director of the FBI is currently on television, questioning the absence of American identity and values in this day and age. The 21st century in this reality is under the jackbooted heel of an autocratic dictator – the descendent of Adolf Hitler – who has substituted American values with those of Nazi ideology. The parallels can’t be coincidental.

In my mind, Earth-X is a place for stories that has long been overlooked. It’s very exciting to see Robert Venditti and Eddy Barrows take up the challenge to revisit this place and create a 12-issue storyline that should give us lots of entertainment. I’m very excited to see what these creators have planned for us! 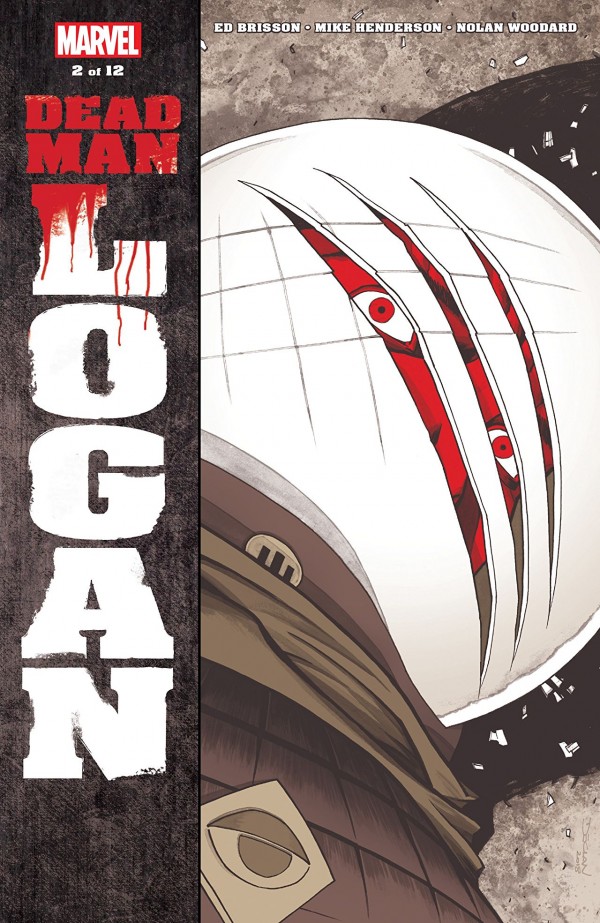 There’s a real method to Logan’s madness. His plan is to let himself die to save his friends. It’s not much of a plan, though – more of a mission.

Still it’s enough of a plan to get me interested in following the story that Ed Brisson and Mike Henderson have crafted for us. I have to say though, I love stories about heroes who have no options left to them. After all, when you have nothing eft to lose then you have the makings of an intense, though short story in which the sky’s the limit.

There’s a lot of freedom in exploring the nature of the character in this book and I think Brisson has a good handle on that. Wolverine has always been the type of character that you could depend on. I think there’s been a lot of exploration of his character but never a limit. I think Old Man Logan – and now Dead Man Logan allows us to explore just how far Logan is willing to go. 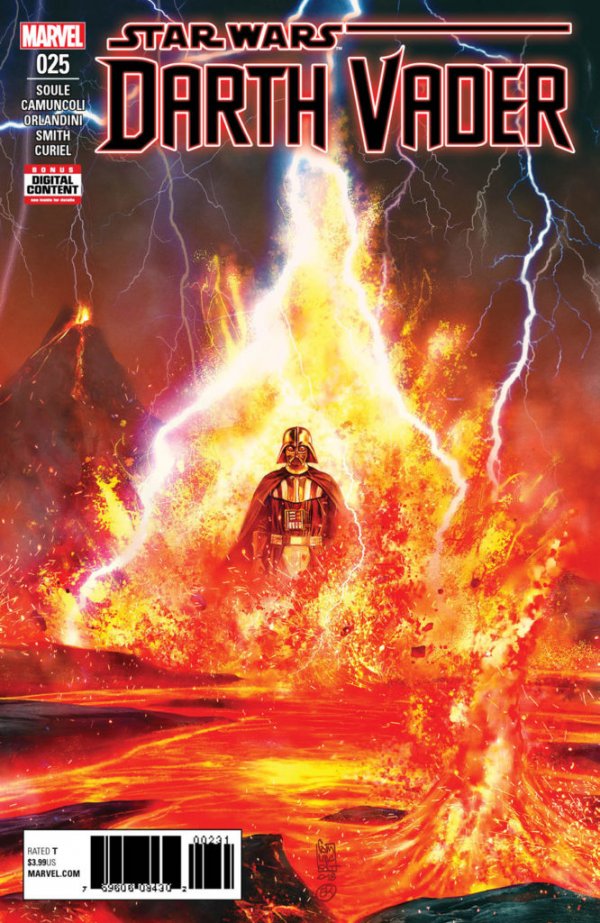 More of a belief system than a plan, this is a stage of Darth Vader’s character that deserves a great deal of inspection. I like to think of this as a stage of Anakin Skywalker’s life in which he tries to make sense of who he is. He’s lost to the Dark Side of the Force but is content to allow it to guide him to some semblance of a directive in life.

I think Charles Soule gets this. It’s a case of Vader trying to force his way into his destiny rather than allowing it to unfold like the rest of us do. In this issue, Vader is trying to resurrect Padme, his dead wife, in an attempt to change his life into what he wants it to be rather than seeing what it will become.

I know this sounds very esoteric, but hey … it’s Star Wars, the greatest space fantasy of them all. The film throws words like “destiny” and “power” around like they were confetti. Sure, it sounds inflated but hey, that’s what good fantasy is about and Soule isn’t unaware of that concept. That’s what makes him a good Star Wars writer.

But sadly, that’s it for this book. It’s a shame, as I’ve really enjoyed seeing Star Wars from this masterful character’s perspective. Of course, Soule will be writing more stories in this franchise. What would it do without him? 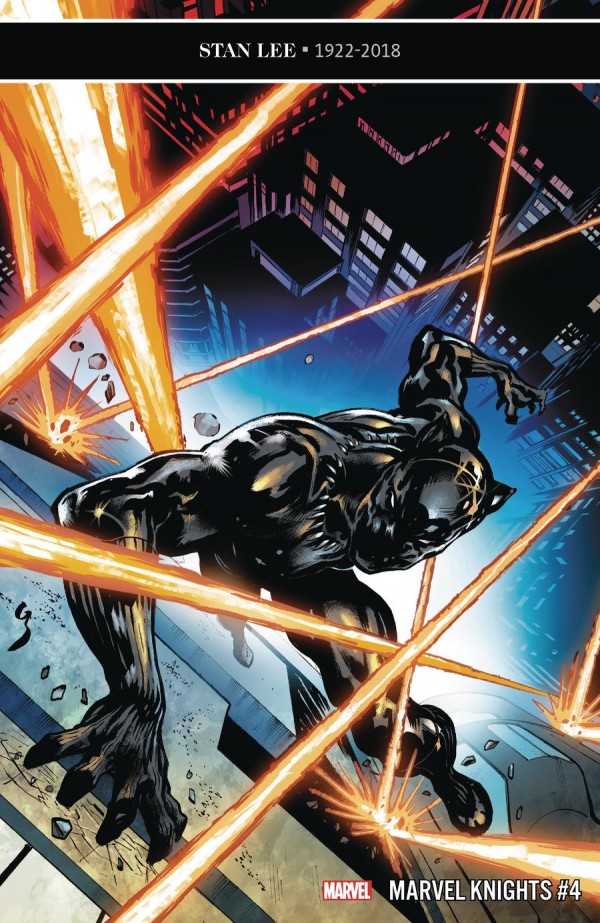 Vita Ayala, Donny Cates and Joshua Cassara bring us another installment of this celebration of the Marvel Knights as we look into a world that has forgotten its heroes.

What I’d really like to know is how the three of these creators manage to plan this book. After all, Cates and Ayala do the story, Ayala does the script and Cassara does the art. I’m really curious to see how these folks work together.

But the story is intriguing as it develops. We are into Issue #5 and this story rests on the indomitable and proud will of the noble King, T’Challa. What of his memories? Will their absence be enough to silence his character? Well, I think you know the answer to that question already.

I found Cassara’s art a little dark. That’s no reflection on his talent, but just an observation. Still, it does the job and in painting the picture of this new world, it’s an image that presents it as a pretty scary one as we gain a bit more insight into the nature of why the world’s heroes have forgotten themselves. 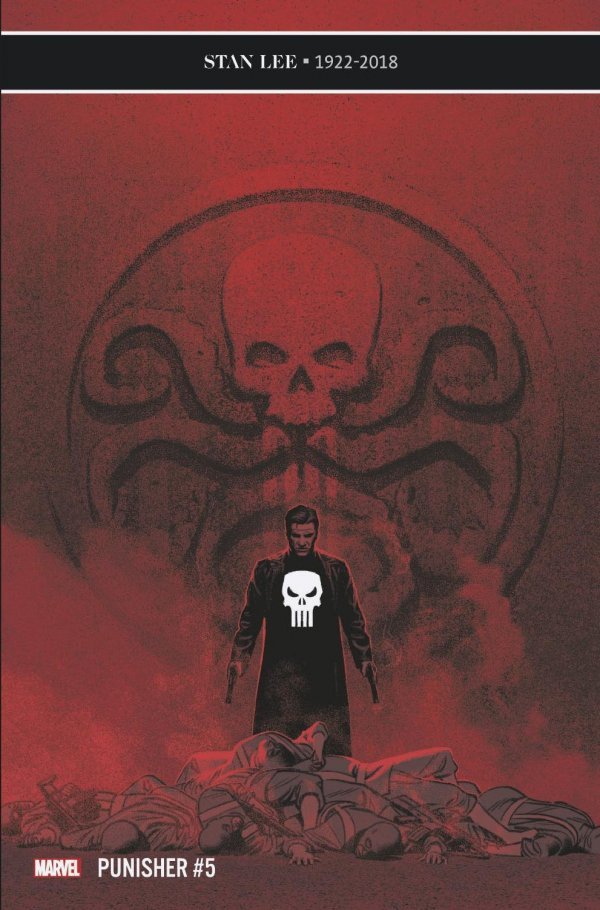 Man, there’s nothing like a trusted friend to get in the way of your best plans.

What I really liked about this issue is the way that Matthew Rosenberg portrays the never-say-die attitude of the Punisher. He’s a brawler – a real tough guy who gets by on grit and determination. He’s just a regular guy with a lot of stubbornness and that passes for a super-power. Hell, he’s only got one gun in this entire issue but that doesn’t mean that he’s any less dangerous.

The Punisher is methodical in this story. Undeterred by a lack of information and after taking out one of Zemo’s lieutenants (in a dirty-fighting combat sequence that speaks volumes about the Punisher’s style), Castle works his way up the cess-pool ladder to get the info he needs. It’s brutal, hardcore and an incredibly accurate description of his methodology. If there was anything to demonstrate how well Rosenberg knows his characters, it would be this scene, expertly pencilled by Szymon Kudranski.

It’s a good depiction of his planning.

But Rosenberg also uses the darker side of Nick Fury to good effect in this story. I won’t give it away, but it’s a wonderful foil to the Punisher’s nature and it’s telling of how well these characters are supposed to know each other and even despite their animosity of recent times, Fury knows just how to manipulate Frank Castle.

So, while there is a little bit of assistance from a friend, this is an example of a plan coming together and it’s my pick of the list of comics for this week.

I’ve interviewed Rosenberg before and he has an innate understanding of the characters he writes from his love of them from his childhood. That’s a long-term passion that can’t be easily overlooked and has to be taken into account when you think about his work. After all, how many people can claim that they actually became what they wanted to be when they grew up?

That’s a plan to be proud of.

Pick of the Week: Punisher #5