You have to appreciate innovation.

Given that we are all locked into a blank calendar of no expectations, when a comic comes around that does something that no one has ever seen before, then not only is it a welcome break from the day-today monotony of COVID-influenced boredom, but it’s a trailblazing way of new storytelling in the comic medium.

I’m talking about Legendary Comics’ Acursian (Carole Barrowman, John Barrowman, Erika Lewis) and it’s a story that you should pick up. 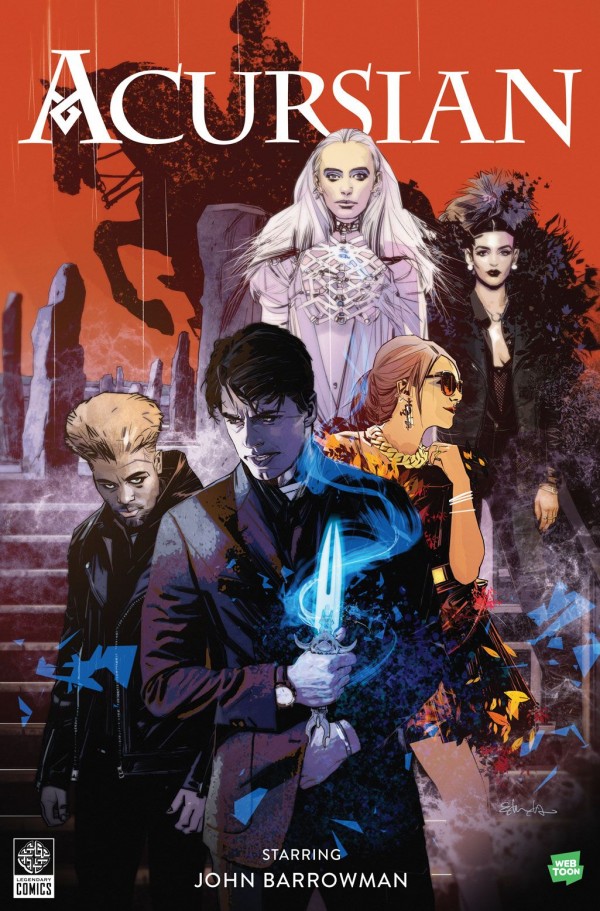 You see, first of all, I really like that the creative team went for a 215-plus page hardcover format right off the bat instead of breaking it down into an episodic regular series.

Don’t get me wrong: I broke my teeth on first a weekly comic series format when I was a kid in the UK, but when I emigrated to North America, the change to a monthly schedule was a little jarring, but I got used to it when I learned there was a greater volume of comics to read. However, there is something to be said for reading an entire story in its entirety when it’s produced, but then again, the other remarkable aspect to this book is that it’s a first, as I alluded to in my introduction.

You see, this is the first time in comic history (to my knowledge, at least) that a comic creator has also inserted his image into the story of his creation. I’m talking about the comic’s co-creator, John Barrowman (Dr. Who, Torchwood, Arrow), of course, whose likeness plays the main character, Charlie Stewart in this story.

A little backstep. While John is the co-creator and character inspiration, John readily admits that the wordsmithing credit fully goes to his sister, Carole and Erika Lewis. He describes himself as a creative entity who can come up with characters and ideas but he also gives his sister full props for putting everything into print. In my book, that’s not only admirable but it’s the type of creative collaboration that really is a “feel-good” story. I think that the family who can work together has a bond that really speaks to the closeness of their relationships, and that itself is a great story achievement.

John and Carole have previous writing collaboration history together. Plus, John is not only a comic fan, but has a decent repository of comic knowledge to draw on as well. His role as Malcolm Merlyn in the television adaptation of the superhero, Green Arrow – Arrow ­– also lends a great deal of authenticity to this story.

I have to say that I’m a fan of clean lines and well-defined art. The art of Beni Lobel (with designs by Tommy Lee Edwards) borders on that line of idealized characters, that are common to traditional comic art, but also have a note of realism that adds to the story’s authenticity. The skill with likenesses is definitely a factor in the purpose and success of the storytelling. I’d gladly pay for original art by this creator, and that’s a litmus test I apply when I’m appreciating the art in a comic book. Hopefully, Lobel is taking commissions!

The basic premise of this story taps deeply into Scottish history and Celtic lore. The victim of a generations-long curse suffered by the misgivings of his ancestor, Charlie Stewart finds his life turned upside-down as the sins of his fathers are visited upon him.

However, it’s not as simple as all that. There is a truckload of multiple themes in this book. From time-travel, Celtic Mythology, Scottish History, alternate realities to the importance of family – it’s a smorgasbord of multiple story topics that will undoubtably please a variety of comic-loving fans out there as Charley has to navigate the many obstacles that stand in the way of the restoration of his life to what is once was.

Normally, I don’t get the chance to interview the creators of a book before I write up a review. Luckily, I was able to talk to John Barrowman about the creative efforts that went into the writing of the book. I’ll post that interview in the next couple of days, but let me just say that it was enlightening as well as entertaining to learn more about the innovative nature of this graphic adventure.

You see, this is a new type of storytelling format for comics, in that a creator has actually physically inserted himself into the fabric of his story. While I understand that this work isn’t exclusively John’s, he is a co-creator and the purpose of using his likeness in the book is to obviously attract readers within John’s fanbase but also to break new ground. The fact that the credits list John “starring” as the character Charley Stewart definitely gives this story a new type of status that other comics this week don’t have. It’s not like television actors who play superhero characters can list their credits in a comic, but John has done so. In fact, if this book was ever to be licensed into a television or film production, then they already have the actor ready to portray the character. There’s a lot of foresightedness in this character creation and, like I said, I love to see innovation.

I have to also confess that I’m drawn to the Scottish Mythology and History. Being an ex-pat Scot myself, the Battle of Culloden and the fall of the Stuarts plays a very romantic part of my family’s history. I’m sure it does for a lot of other Scottish readers as well. But the inter-weaving of Celtic lore and history is always an entertaining draw for readers of every culture and it’s clear that Carole and John Barrowman definitely have had a lot of fun with this story. I’m sure this hasn’t been lost on other readers but it’s definitely something that I want to point out.

There’s an innovation at play in that too. After all, using mythological elements to augment the story behind the history? True, it’s been done before but each time is an innovation in its own and, being a teacher of both History and English, I really enjoy it when someone warps these two elements for the sake of a good story.

An innovative hardcover comic with a twist on Scottish culture and lore, featuring a fan-favourite actor as a co-creator and leading character as well as an experienced writer and talented artist with a new feature that hasn’t been seen before? Yeah … it’s definitely a story for comic history buffs and one that will keep your interest.

This book hits all the right notes for fanboys/girls, comic readers, history and fantasy lovers alike. Acursian is my pick for this week’s comic review. Give it a go and let us know what you think.

Until next week, Merry Christmas, Happy Holidays and hopefully you are all well, hale and hearty! See you in the new year!

Pick of the Week: Acursion