We all need to acknowledge the miracles in our lives – even the small ones.

It snowed a major amount today. Though I live in Canada, this is significant because in the last few years, my part of Canada hasn’t really seen much snow before the holidays.

Pretty banal, right? I don’t care; I’m calling it a minor miracle. There’s just something about snow for the holidays that makes for a more enjoyable season … and comic reading a very cozy experience! So, let’s get to the list for this week and curl up in an armchair with a stiff drink of something and settle in for the night! 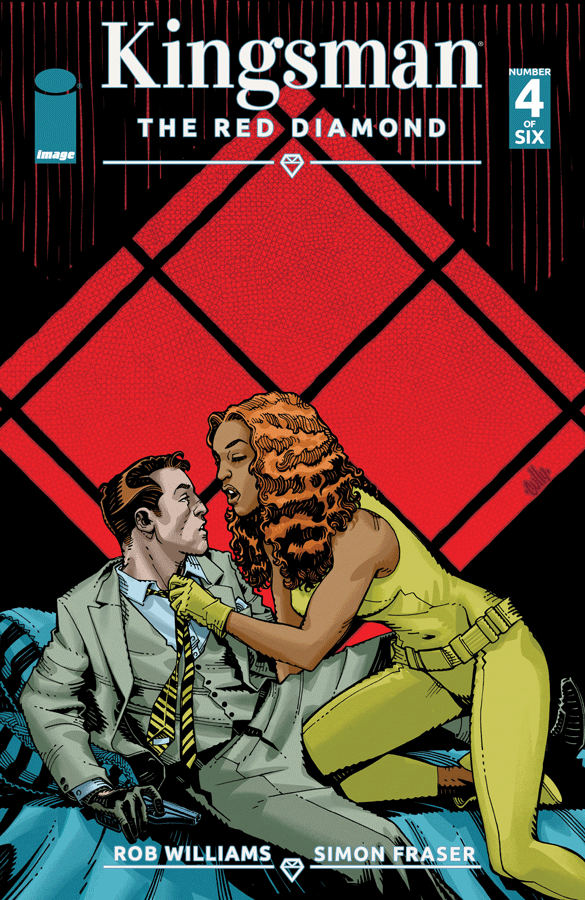 The anti-James Bond. A super-spy who’s ready to fight – and play dirty to reach his objectives.

Rob Williams and Simon Fraser have definitely given due justice to the work of Mark Millar, Dave Gibbons and Matthew Vaughn. This is completely within the vein of the original work and certainly a load of fun.

To me, the value that Eggsy holds for his family is another of his traits that differentiates him from his super-sophisticated colleagues. They have no connections of note, nor do they seem to want them. It may seem awkward and out of place, but Eggsy still does his best by them. The source of his strength is his mum and younger brother which is something you will never see James Bond have. He’s a spy character for the 21st century. 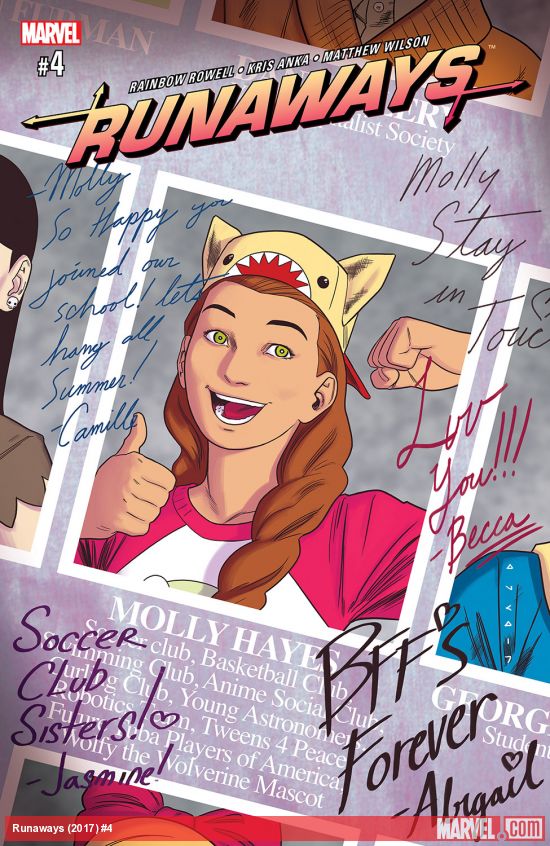 Another miracle – the Runaways are re-united at Molly’s grandmother’s house and she has a family again.

I loved this series when Adrian Alphona and Brian K. Vaughn originally presented it. I still have my hardcovers signed and an original sketch of Gert by Alphona. I’m pleased to see that it’s finding new life in comics once more, not to mention its new incarnation in television format.

I can’t say that I’m a fan of Kris Anka’s artwork, but Rainbow Rowell definitely has the spirit of lost kids just clinging to each other in an attempt to find some sort of family balance with each other. Great book and I’m really excited to be reading more of it in the near future. You should check it out. 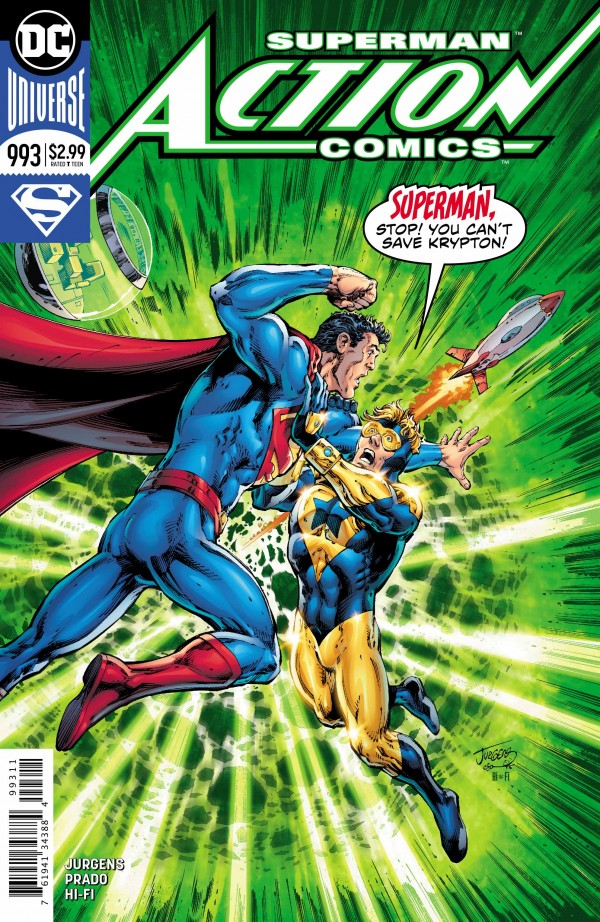 This is a particularly engaging storyline by a master storyteller, Dan Jurgens. There’s something about this story that not only gives off a classic Superman vibe form the 1980’s but reaffirms some of those original values of the Superman property.

Superman’s connection to Krypton is a storyline I always like to read. Krypton is not only a source of great stories, but it’s also in the past. That means time-travel, and despite many paradox-hating sci-fi readers, I love stories about time travel!

Booster Gold guest-stars in this tale and while it’s easy to get distracted by Booster’s materialistic reasons for being a super-hero, he’s also a great foil for these types of stories. After all, the character is supposed to be from the 25th century, right? So, his tech allows him that “escape-hatch” to be involved with time-travel stories. He’s a perfect deus ex machina, but it’s also a chance to see him do something truly heroic, like protecting Superman from interfering with the time continuum.

I really enjoyed this story and I’m looking forward to its continuation in the next issue. 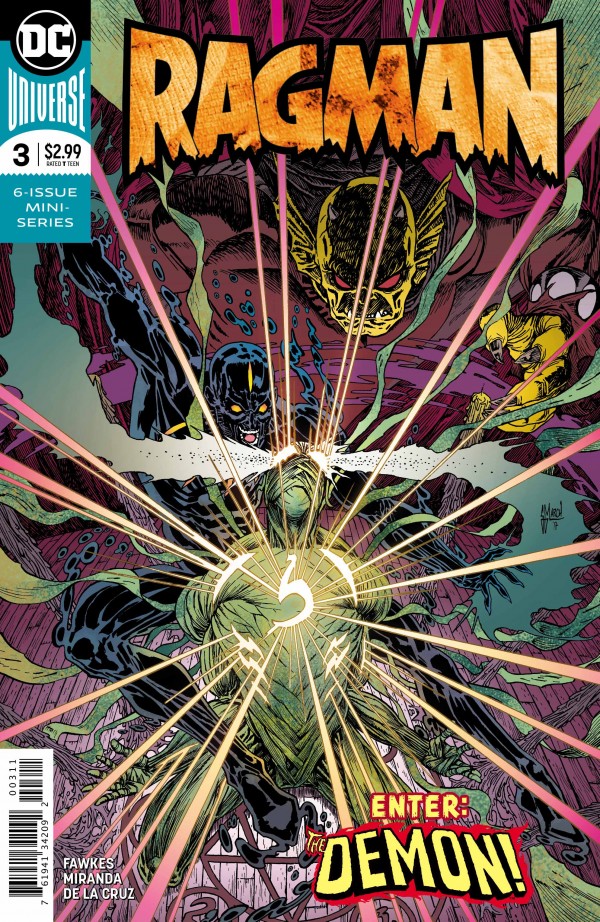 I’ve always liked Ray Fawkes’ writing, but to get introduced to Inaki Miranda’s art is a new pleasure that I was not expecting.

It’s an incredibly simple premise, but the guest appearance by one of my favourite characters of all time – Etrigan the Demon – makes this a really fun read. Especially as Rory is still learning about his powers. I love that that the first thing he does is try to put down the infernal creatures that follow him after his tour of duty.

I also really like the military connection to this. Again, very simple to execute but it works because of its familiarity. I think that soldiers who have served are natural candidates for superpowers because they understand, better than most, the value of life and the struggle to protect it. 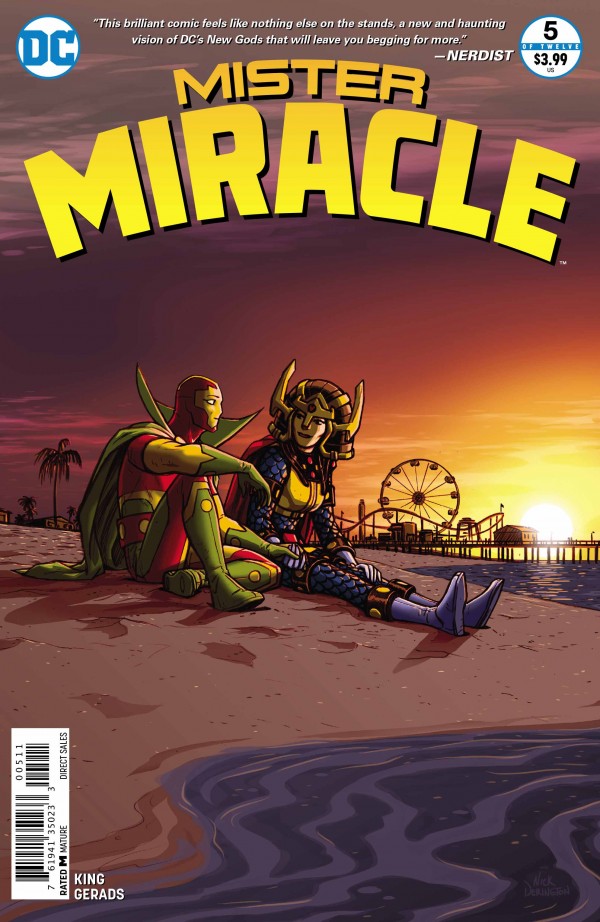 You know, when talking about cozying up for the night, you also need the secure knowledge that your family is likewise warm, comfortable and nearby. That’s kind of the vibe I got from this issue of Mister Miracle by Mitch Gerads and Tom King.

Yeah, this guy just seems to hit all of my comic-reading pressure points. I mean, there’s a distinct vein of family togetherness that emanates from all of his stories, but in this case, there’s a sense of partnership between a man and his chosen spouse that means the difference between success and failure.

Hey, I know I can’t succeed without my wife. We’re a true team, and so are Big Barda and Scott Free. It’s this ability to relate his super-hero stories to common things in his reader’s lives that makes Tom King’ writing so successful.

I know I’ve been harping on this in previous posts. Tom King has made my list of chosen books on a near-weekly basis recently.

I’m too lazy to go back and count.

I wish it was deliberate; I really do, because then I could approach the guy and start hitting him up for a kickback or something, but in all honesty, it’s just his writing that appeals to me. It’s a simplistic approach that has such a lasting and penetrating effect – and I can’t believe that other writers have picked up on it.

But I’m over-generalizing. There’s more to it than that. When I look back on his history of work, it’s also his gift with dialogue. His ability to craft turns-of-phrases that stick in your head, or seem completely natural that stay with you and give you the impression that his characters are truly alive. When you consider that they aren’t his characters, that realization just adds an extra level of appreciation for his work.

He creates a real sense of empathy to the characters; they matter to him. You can see that in the way that Barda and Scott cling to each other in this issue. It’s their last day together and though Mister Miracle says that all she needs to do is ask him to stay, Barda affirms that she can’t be the reason for him to go to war with New Genesis.

Of course, the underlying premise here is that he needs a rock to cling to. His sanity is on the line. The panels themselves are shaky and somewhat distorted at times, conveying the impression that Scott is doubting his reality. If she asks, he’ll know what’s real.

Sure enough … even though he is distracted by the con-man’s tricks of Funky Flashman, Scott sees his path and it’s framed in the love of a good woman.

Damn it … I love this book. It’s fresh, it’s a renewed appreciation for the New Gods and you have to love the nod to Jack Kirby with the inclusion of his sidewalk signature. Having the creation pay homage to the creator is another one of those subtle yet visceral emotional connections to the hero that readers can all-too easily identify with.

So that’s why Tom King, Mitch Gerads and Mister Miracle #5 get the distinction of pick of the week for this week’s round-up.

Is this another one of life’s minor miracles to celebrate today?

Pick of the Week: Mister MIracle #5