The best part of the holidays is the anticipation.

When the holidays arrive, sometimes you are too tired to figure out what to do with the time you’ve suddenly got in abundance. Do you sleep? Do you catch up on all your television or reading? For me, it’s the latter. There are too many comics for me to effectively enjoy to their fullest within a week. Sometimes I am disappointed with my own reviews because of the tight constraint I place myself under.

So, for this holiday season, I am going to catch up on my reading – but I’ll be re-reading my own reviews in an attempt to improve my own work and hopefully make the best use of my time to become a better writer!

We can all have goals, right? So, what am I reading this week? 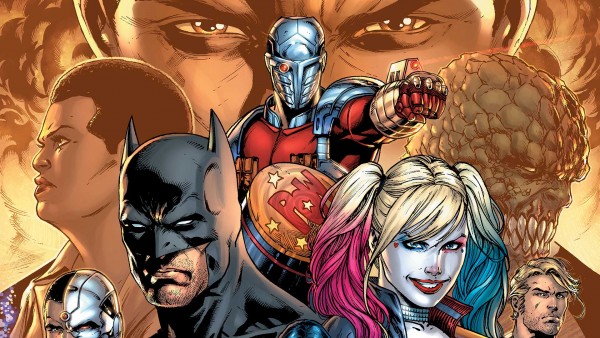 Fabok’s art is so grim. He’s one of the DC artists that I like to think have epitomized that DC house style of art that is glossy and so reminiscent of Jim Lee’s own pencilling. At least, that’s the comparison I make. Maybe I’m wrong.

Joshua Williamson has spun a pretty and plausible (as comics go) plot pitting the JLA up against this year’s popular super-misfits. Seems anti-heroes are the cinematic rage these days, but to see a squad of ne’er-do-wells go up against our favourite scout troop is definitely something that DC is betting that folks want to read and it’s decent story. I’m a little apprehensive about the third super-team awaiting in the wings (think 52, people) but I’ll admit that this has got my curiousity going. I’m definitely picking up the second one when it comes out.

It gets my honorable mention this week, for sure! 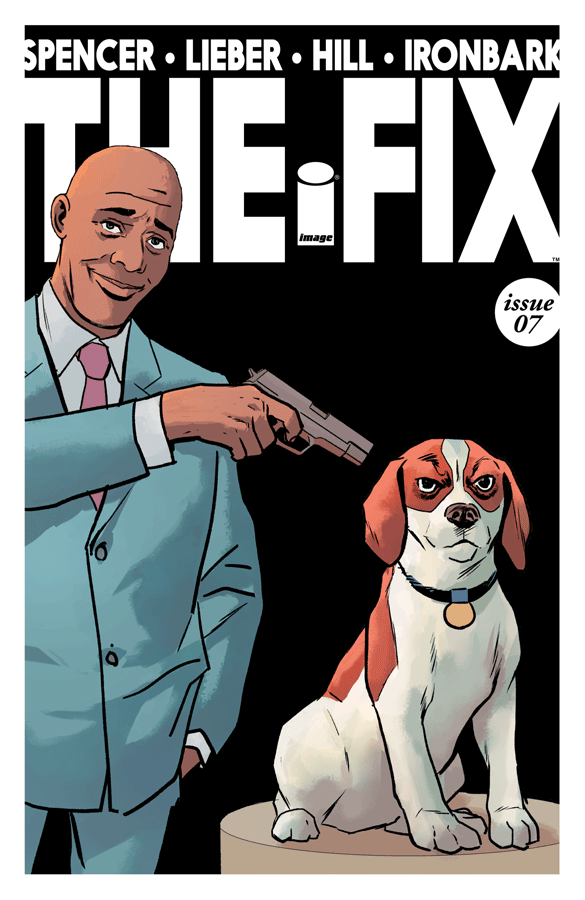 Definitely a fun book to pick up. This month’s issue lacked the usual humour that this book has treated us to in exploring corruption in our most trusted public servants. It’s a little more emotional as it explores the relationship between a man and his dog. Check it out to see what I mean – but it helps if you’ve been following previous issues to get a better sense of context. 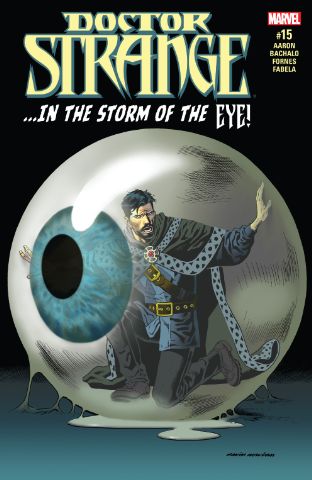 “Blood in the Aether” is a pretty sharp storyline from Jason Aaron. Everyone wants to kill Strange in this one. I like Aaron’s reductionist perspective on Strange and I’m enjoying seeing him suffering for a want of magic. Of course, I also like the fact that Marvel has found a use of the Orb, armed with the Watcher’s eye. He now feels he has some sort of purpose that has twisted his mind and Stephen strange now finds himself outgunned and under his thrall. Imagine: the Sorcerer Supreme looking for something to punch.

I am still not a fan of Aaron Bachalo’s work. Jorge Fornes’ intermittent contributions are a welcome respite. Kevin Nowlan’s cover is quite stunning. But it’s Aaron’s writing that keeps me coming back to this book.

Kelly Thompson provides us with a story for this first issue offering about Clint Barton’s former protégé while Leonardo Romero does art duty.

The cover is a little lame – can’t say I’m overly impressed with the 60’s retro approach; it’s indicative of a hipster-like attitude reaching back for something of a classic bent.

The story itself isn’t too bad, but it does reach really hard for a sense of cuteness that’s a little bit too thick to take. This is Kate Bishop’s real first foray into defining a role for herself and she starts a private investigation agency that’s a little bit too derivative of Jessica Jones and what-not. It’s just a little too borrowed for my tastes. 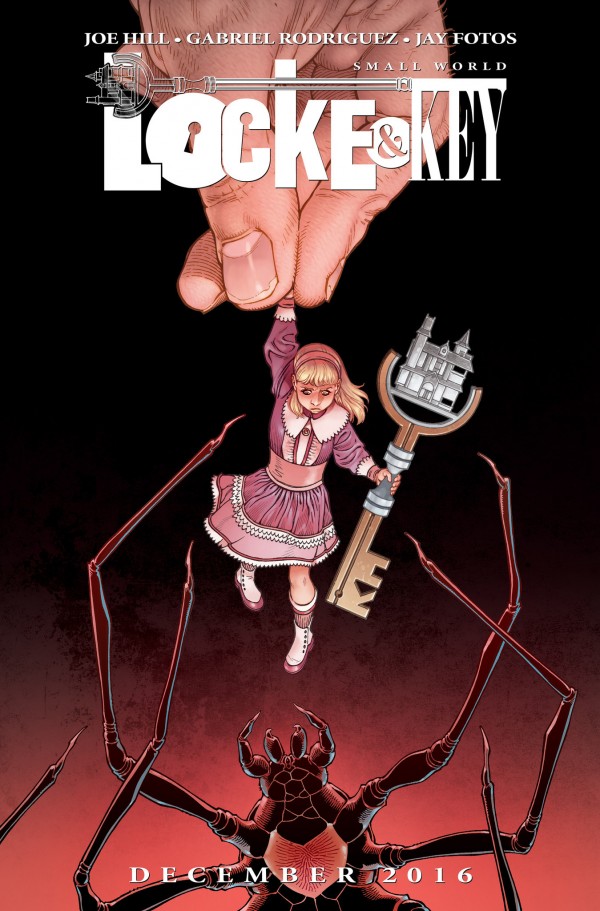 I am such a Joe Hill and Gabriel Rodriguez fan. They have such a rich concept in this story that to see it return tells us that they aren’t done with it. Fans of this series will enjoy seeing a return to the Locke House, but to a time when the Locke family of the early 20th century were completely comfortable with the powers of the keys of the house yet were still not immune to the irresponsibility that often accompanies their usage.

People can be careless with great power. The Locke family (even those used to the magic of the keys) demonstrate this with such clarity. No wonder the keys of the Locke House needed to be hidden, but it’s still a great story to see what happens when this power isn’t respected. After all, the House Key has the ability to affect the miniature people and items in the dollhouse as if they were the real things. Anything that happens in there, happens in the real house. So giant spiders that come out of the dollhouse – well, you get the idea.

It’s the tone of this book. It’s familiar nd comfortable yet such a unique idea and anything can happen in this premise. Hill has a license to create any sort of tale that he can imagine, and hopefully more are coming despite this being a one-shot. 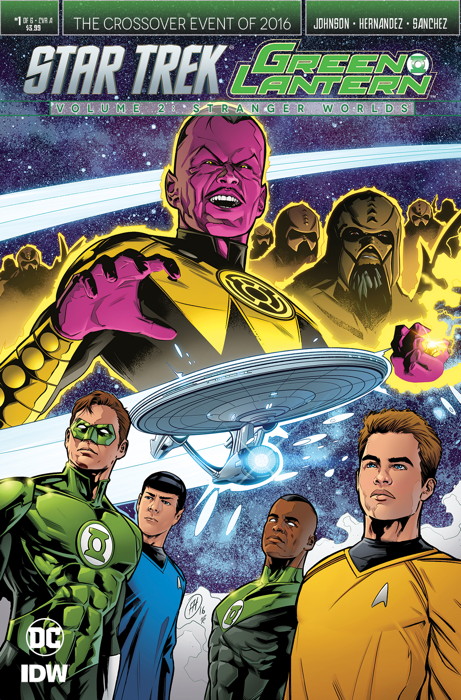 Wow … they’re doing it again! Mike Johnston, an acclaimed Trek writer for IDW has taken the challenge again to connect the Kelvin Trek to the DC Universe and specifically, Green Lantern and the other ringbearers.

Why not? It worked the first time with The Spectrum War.

Seeing Guy Gardner try to lecture a bunch of Star Fleet cadets (and try to make a bit of time with a Vulcan academic) is definitely a fun image to project in your mind.

… But hot damn! If this isn’t a cool story to imagine! The problem that the ringbearers are facing in this new universe is that they lack power batteries. After the battle with Nekron, the Lanterns had no way to return to their realities and were forced to find roles for themselves. With Sinestro as the new emperor of the Klingons, there is still a remnant of their own universe to contend with as well though.

Angel Hernandez’s art is pretty lively. It’s a demanding role to recreate images from two iconic properties but Hernandez’s talent is up for the task. Which is good, considering that it has to satisfy the editorial department of two comic companies!

I have to say, that out of the books this week, it was certainly the one that I enjoyed the most, which makes it my pick of the week!

So along with reading my own stuff, I’m definitely going to have to go back to check out The Spectrum War and catch up on the previous story! Well, that and Locke and Key, of course. IDW has definitely made an impact in the comic purchasing decisions I make.

Perhaps that’s some reading for you to check out this holiday season too? For now, have a relaxing and celebratory season from all of us at Pop Mythology!