The final comic review of the year.

It’s late but it’s the holiday season and to be honest, during a lockdown, I also really don’t feel like getting out of my pajamas! Still, in order to give the day a sense of order and positivity, I have to think of my favourite things, and like the song says, then I don’t feel so bad!

Thank God for the regularity of the comic publishing cycle. 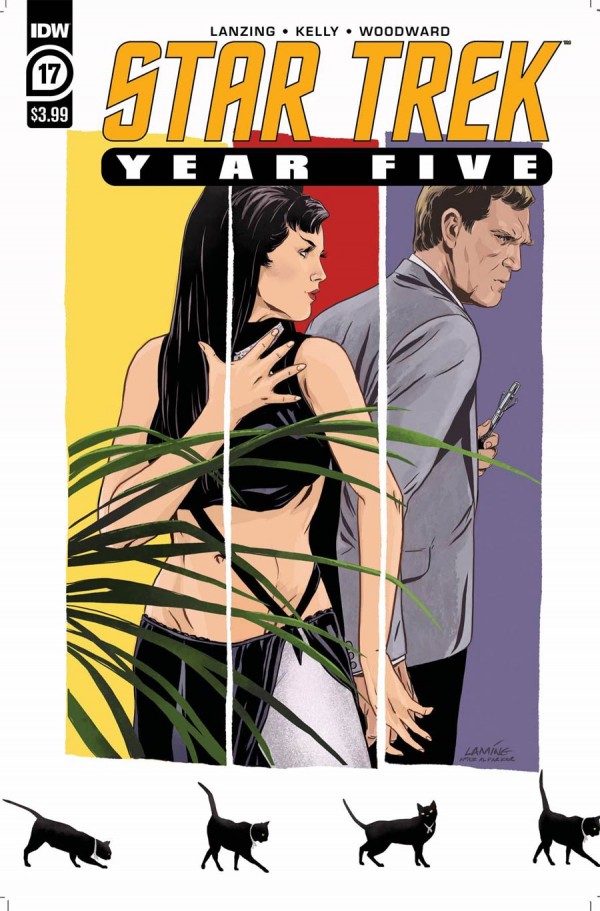 Before I begin my review of this particular issue, let me first state that it’s such a relief to see J.K. Woodward back on a Star Trek title! The guy doesn’t get enough Star Trek work, to be completely frank. So, whoever made the call to assign Woodward back on a Trek book gets my full adoration. Marotz – was that you? Doesn’t matter – I’m giving you credit anyway.

The first comic I pick up and it has to include one of my favourite contemporary artists. That has to be a good omen for the rest of the week to come.

The story so far: former ally of the crew of the Starship Enterprise, Gary Seven, and his shape-shifting partner, Isis have interfered with the inner workings of the Federation and placed themselves directly in opposition to Captain Kirk as of late. While a surprise to Kirk and company, readers are treated to the unknown backstory of Supervisor 194 who we first met in the TOS episode: “Assignment: Earth”.

This is the type of stuff that makes my inner fan boy reveal himself, much to the disdain of my family.

You see, there is a lot of giggling.

What do we learn? We learn about The Plan; we learn more about the relationship between Isis and Gary Seven (oh, and his real name). We learn more about the mysterious organization that Gary Seven was selected by over 6000 years ago from a stock of neanderthalic, proto-humans to receive genetic modification in order to serve The Plan. In short, this is Gary Seven’s origin story and it is a wonderful addition to Star Trek lore.

Yeah – this is one of my favourite things for this week. 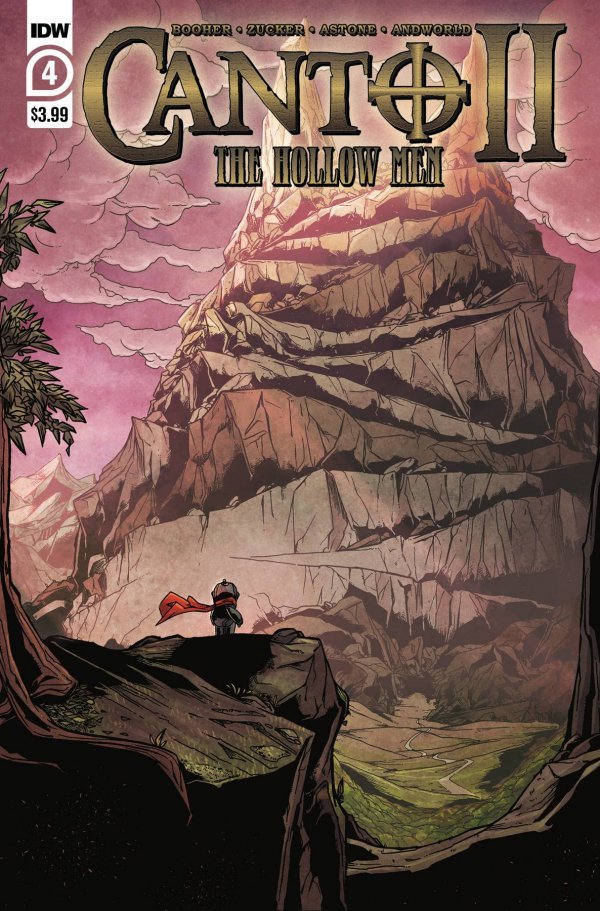 And then there’s everyone’s favourite plucky little warrior. More than a child’s fable but less than an epic, this is a character that is both aspirational and attainable. We can learn to be like this character, as he soldiers on, despite the odds.

A quest isn’t necessarily something that is imposed upon you, it is the calling that you feel inside. No-one has asked Canto to free his people, to find the source of magic of the Shrouded Man – it is something that he knows he has to do inside.

In this issue, Canto re-encounters some familiar faces – giant faces, to be a bit more precise – as he continues to make his way to the Yellow Mountain. Canto’s greatest weapon is simply truth. He has courage not just in arms and in weaponcraft, but in his ability to confront his enemies with truth and to discern fiction from fact. When he confronts the Fury, for instance, he greets her with bravery but with also compassion because, like he was, she is still a slave of the Shrouded Man. He epitomizes nobility but is not afraid of a fight. Because of this, he has his enemies’ respect.

No-one asks artists to create or dreamers to design. These are things that they feel inside and it is a wonderful metaphor for the hero within us all to reach for our dreams and achieve them. Nobody asks us to live our dreams – we have to ask ourselves. In these trying times, is there anything more positive to live up to but to try and be like the exemplar in this story and simply do what we want to do despite the opposition in our lives?

There is no greater imposition than that which we put upon ourselves. That’s Canto – and he’s another one of my favourite things for the end of this year. 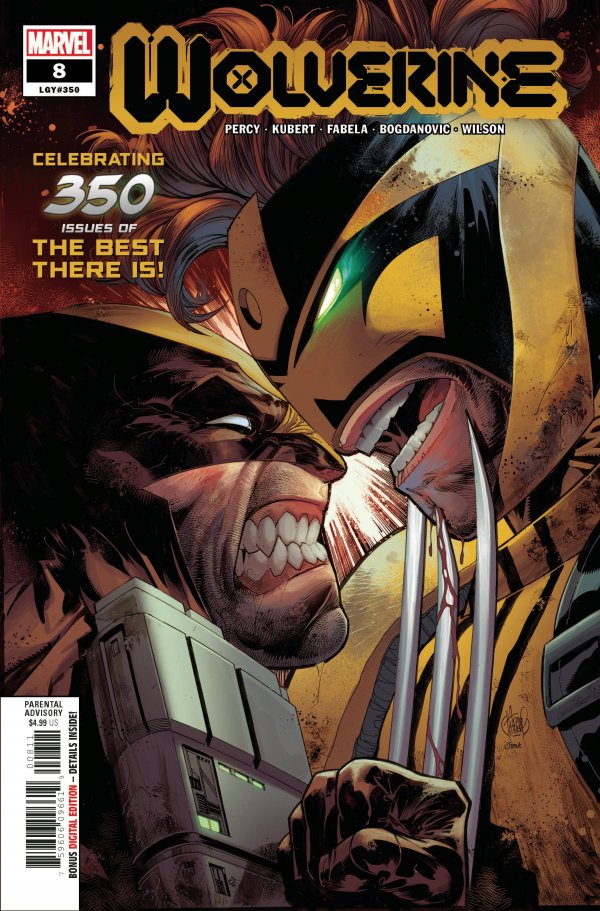 And then there’s the best there is. Wolverine has always been a character that I can depend on for not just a good story but a character worthy of my attention. Even though the Hickman era of The X-Men may have the X-Men on a trajectory that may be a bit messianic and ridden with a more mystical nature than I’d like, I’m comforted by the fact that at least Wolverine is still true to his original roots.

In this issue, written by Benjamin Percy and pencilled by a great artist and a really decent guy, Adam Kubert, Wolverine recalls some of the memories that are still somewhat spotty in his head of times when he was the best at what he did … for the worst possible reasons.

Kubert’s rendition of Wolverine has always been a favourite of mine. He manages to capture not only Wolverine’s natural savagery but also his forced sense of civilization. It’s in the body language, the facial expressions – this is a man fighting to control the beast within, and that’s Kubert’s Wolverine.

And that’s another of my favourite things.

Now we come to the end of another review – the last for this God-forsaken year. But, I’m glad I’m going out with a list of my favourite things in comics to enjoy.

My pick of the week for this week’s run has got to go to Star Trek: Year Five #17.

Is it a comparative thing? Is this book better than the others on my list, or for that matter, the other books released by the other publishers? No – they’re not, but since this is a list of my favourite things out of comics for this week, I’m celebrating my favourite fandom in comics. Star Trek has been such an integral part of my life for as long as I can remember. It has a sense of positivity that isn’t all roses and sunshine. It promises a good future if we work at it.

Nothing comes for free in this life and original Trek, unlike the newest generation, taught us not to take things for granted. We cling to our favourites because they give us comfort but we should always have that sense of appreciation about them.

That’s what I like about this book from Lanzing, Kelly and Woodward. It’s a story that hearkens back to the glory days of TOS and looks to explore it further, proving that the best Trek stories can still be found in our favourite episodes.

The idea of the Aegis, more backstory on Isis, the shape-changing partner of Gary Seven – and even to learn Gary Seven’s real human name! All of these things make for an issue that celebrates the best of Star Trek. That gives me joy, and you know what? For the end of 2020, that’s not such a bad thing.

Until next week – see you in the new year! Let’s hope it becomes a favourite in the years afterwards!