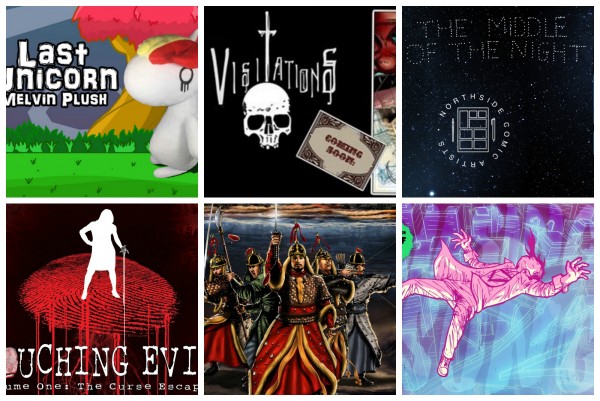 Chicago is loaded with the talent of many fine comic creators. Some are widely known among the general comic-reading public such as writer Kyle Higgins (C.O.W.L., Nightwing) and writer/artist Tim Seeley (Revival, Hack/Slash). Others may not be quite as widely recognized yet but it does not mean that their work is any less remarkable.

In truth, I did not move to Chicago for the comic scene. I moved here because one of the few chronic disease specialists in the country qualified to treat my medical condition, Dr. Keith Berndtson, bases his practice here. However, one of the nice bonuses of living here, which I discovered only after settling in, is the wealth of local comic talent that I now get to boast about when it comes to my newly adopted city. Sure, any major metropolis will have a lot of talented artists working within it. But what impresses me about these Chicago-based comic creators is also how friendly, inclusive and welcoming they are.

For someone like me, health and mobility issues restrict how much I’m able to get out and interact with the world, so most social interaction I get is through the Internet which isn’t always known for its friendliness. But over the course of the past several months, I’ve met more and more local creators online (and hopefully someday in person) and have continued to be impressed by how nice they are.

As a small gesture of appreciation for this welcoming atmosphere, this here is a little round-up of both current and recently completed crowdfunding campaigns that Chicago comic creators have done on Kickstarter, Indiegogo or other platforms. In recent years crowdfunding has become an invaluable tool for independent creators, but raising funds this way is no walk in the park and indie artists need all the help they can get. This post was therefore written in the hopes of helping these projects to get a bit more exposure.

Note: be sure to also check out my article, “9 free, super easy ways to help anyone’s Kickstarter.”  If you’re doing a Kickstarter, you might have friends who want to help but are short on cash and don’t really know other ways to help that are actually very easy. Show them this other article so they can know there are plenty of very easy and quick ways to help.

Jack and Maria Gonzalez are doing a Kickstarter to produce plush toys for their Melvin the Unicorn character (there’s also a comic that a previous Kickstarter funded). But Melvin isn’t just any unicorn. He’s the last of his kind, an extremely depressing fact in itself. But for Melvin life is further depressing because everyone talks about unicorns as if they are the epitome of a charmed existence. But that couldn’t be further from the truth for poor Mel who’s very depressed. But you can help him feel better by backing or sharing this project.

The Middle of the Night: A Comic Anthology

The Northside Comic Artists is a collective of comic artists, founded by Edward Witt, that make up a sizable chunk of the overall Chicago comic community. And they recently launched a Kickstarter for a volume that will compile many of their short works. This will actually be the second anthology for the group, the first one having been Kickstarted in the summer of 2015. The goal is incredibly low, maybe one of the lowest I’ve ever seen on Kickstarter, and what’s admirable is that they’ve been able to parlay some remaining resources from their previous Kickstarter to keep down the expenses of this one.

Scott Larson is funding the second issue for his comic Visitations which is set right here in Chitown. In recent weeks he has been making the generous offer of sending a free digital copy of issue #1 to anyone who e-mails him at Visitationscomicbook@gmail.com. It’s a pretty darn cool offer in itself but Scott is offering more. He states for the record that if you like the first issue after reading it, he wants you to feel free to make a copy of it and send it to your friends. That’s right, good people, here’s an artist who essentially wants you to “pirate” his work! How do you show appreciation for such coolness? Well, I guess it wouldn’t hurt to share his Indiegogo link or back it for a couple bucks.

Past or Recent Projects

A special shout-out in particular needs to go to the creator of this past Kickstarter project, Onrie Kompan. He is one of just a small handful of Chicago comic creators I have had the pleasure of being able to meet in person. But we quickly went from being just casual friends to close friends and he has been an amazingly caring and supportive friend who has helped made my transition to Chicago in so many ways that I can’t even get into them here. One of the reasons we were able to bond so well may have had to do with a shared interest in Korean history and culture, and Onrie’s comic Yi Soon Shin is a terrific work of historical fiction based on the life of Korea’s most famous war hero, the eponymous Admiral Yi Soon Shin.

Dan Dougherty is actually one of the artists presently attached to my Kickstarter project, and his own Kickstarter for the hardcover volume of his comic Touching Evil was carried out in November of last year with great success. Yet another local artist whom I found to be very approachable and friendly, Dan’s delightful Beardo comic strip series is presently my go-to relaxation reading material of choice when I feel like I need to take a break from promoting my Kickstarter. Touching Evil looks awesome as well and is on my ever-growing list of books I need to someday catch up on.

Jacob Halton’s Kickstarter for Chasing a Song was selected as a Kickstarter “Project We Love” and, though I have not yet had the chance to read it, based on what I’ve seen it looks like a dazzling psychedelic journey that I look forward to digging into someday. His Kickstarter campaign video was one of the most clever I can ever remember seeing, and with the clean, attractive layout of the campaign page it is no wonder the project was successfully funded. Jacob also provided some very helpful pre-launch feedback for my own Kickstarter and, like the others here, is also a great guy to boot.

Trevor Mueller has done two Kickstarters so far, both successful, and the last one was for his popular all-ages comic Albert the Alien: Vol. 2.  Like Jacob’s project above, it too was chosen as a “Project We Love” by Kickstarter (back when they were still calling the honor “Staff Pick”). Along with Onrie Kompan, Trevor recently gave a talk at a meeting of the Chicago Comic Creator group run by Captain Joel Siegel, Ed Siemienkowicz and Daniel Scheuermann. This shows a gracious willingness on the part of these local artists to share the things they’ve learned with the rest of their community and I find that very admirable.

Gene Ha’s Kickstarter for his gorgeous book Mae was massively successful, unlocking all of its stretch goals, and was later picked up by Dark Horse Comics. If you weren’t around for the Kickstarter and didn’t get a chance to back it, no need to feel bummed out. It will soon be hitting retail stores, and all you have to do is contact your local comic shop and ask them to carry it or to order it for you!

Writer Patrick Trahey is another Kickstarter veteran who has done a couple of campaigns now. The latest one for Tyranny of the Sun was unfortunately not able to reach its goal, but the one before that for The XII was. I have no doubt this talented creator will either find an alternative means to fund Tyranny of the Sun (Indiegogo, perhaps?) or eventually take another crack at Kickstarting it. And I’ll be there to support it again when he does.

I just had the pleasure of announcing on my Kickstarter page that Ali Cantarella has joined the lineup of artists attached to my campaign. Ali did a successful Kickstarter in 2013 for her book The Hasty Pastry. And her involvement with the “Drawing Dreams” program for Chicago Loot Drop  underscores her passion for getting involved in numerous good causes. I’m honored that she felt drawn to my project.

I was not previously familiar with Scott Kroll and Tyrell Cannon’s work but it just goes to show that I’ve only grazed the tip of the iceberg when it comes to the wealth of local talent here. Scott and Tyrell did two previous Kickstarters, both successful, for their Speculative Relationships anthologies Volumes 1 and 2 which seek to bring back more of a romantic element to comics but within the genre of science fiction. Both volumes look like fabulous stuff. 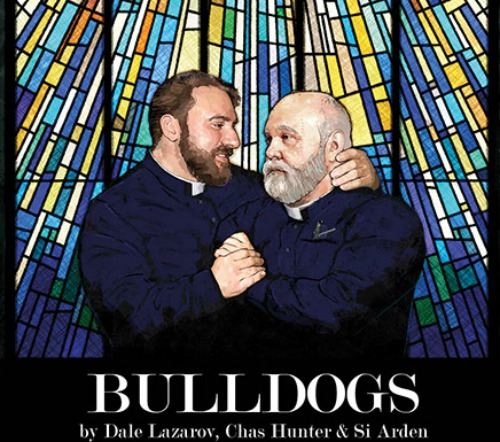 Writer Dale Lazarov didn’t do a Kickstarter for Bulldogs, his latest collection of gay, sex-positive comic stories, but it recently came out in March from Sticky Graphic Novels. Having just met and befriended him on Facebook, I wanted to be sure to give his new book a shout-out along with the crowdfunded projects I’ve listed above. All stories are written by Dale in his trademark wordless style and the art is by Chas Hunter and Si Arden.

Note: If you’re a Chicago-based comic creator, are currently doing a Kickstarter or have ever done one, and would like to be included in this round-up, just let me know using the contact form on this site.