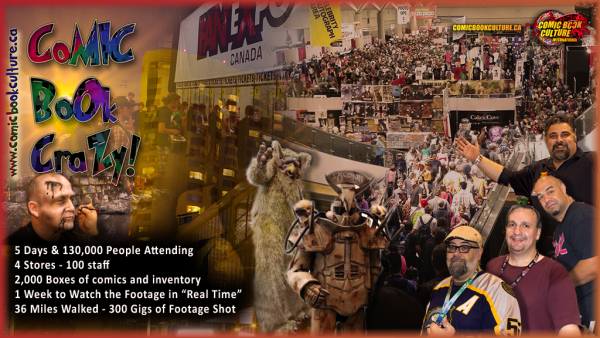 A very wise creator recently told me that she really admired crowdfunding projects and tended to contribute to them whenever she could because of the passion they represented. I can see her point. I mean, it’s a very vulnerable thing for someone to place themselves in the public eye, present their work for all to see and then literally ask strangers to believe in it enough to financially contribute to it. But because passion overrules propriety, people do it.

In this particular instance, the Kickstarter campaign that has caught my attention is the film documentary project of DorVal Films and their focused examination of four comic store owners as they set up for Canada’s biggest nerdculture event, FanExpo.

Titled Comic Book Crazy! Wayne Dorey and Richard Vala followed the owners of The Silver Snail, The Comic Book Lounge and Gallery, One Million Comix & Next Games and Gotham Central Comics & Collectibles for five days. From set-up to fan interaction and to finally striking the tables and taking the remainder of their products back home again, this film project promises to show comic fans a unique and eye-opening perspective of what a comic convention looks like to retailers.

It’s a pretty gritty premise. Seeing a con in the early days of set-up – as I can personally attest – is a very raw, chaotic and intimidating thing. Essentially, a retailer has to decide on what inventory to bring to the show, hire people to help man the tables and literally build a mini-store in an exceptionally limited amount of space. Along with the headaches of cash management, inventory control and the challenges of simply feeding yourself and taking care of basic needs can prove to be a headache. It’s not just sharing a love of comics.

It’s their business, to be sure, but it’s an example of entrepreneurial passion as well. Though it’s a smart decision to bring your business to where over 150,000 of your customers will be, it’s also a very interesting thing to see, these people are doing what they love and making a living out of it. Still, it’s a fascinating thing to see just what that passion entails.

This is a comic book documentary that provides a very necessary insight into the way a con works. Essentially, comics are the common element that bring fans together. Media personalities are now a common feature of conventions but essentially, comics are the heart. One may not be familiar with the latest geek television show but everybody pretty much knows the comic it was based on.

With the slow but steady disappearance of ‘brick and mortar’ stores from communities, comic conventions are one of the last few places where you can personally interact with people who really know comics. When you see the dedicated knowledge and hard work that guys like Kevin Boyd of The Comic Book Lounge and Gallery or George Zotti (formerly of the Silver Snail) demonstrate their knowledge base as they manage these operations, it gives you a new appreciation for the guy standing behind the table. You know, the guy who’s quickly scarfing down a slice of pizza while also trying to find issue #34 of some obscure comic series that he just happens to have in a box under the table.

Yeah, like that very wise comic creator said to me earlier, Kickstarter projects represent passion. But this is a project that is built on passion. Currently sitting at $1715 of its modest $5000 goal, if you have any interest in understanding the labour of love that is working a comic convention, then you really need to be a part of this comic book documentary. Check out the Kickstarter page HERE.