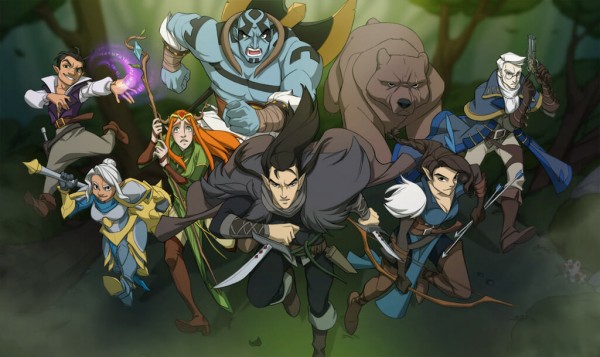 The Critical Role phenomenon has taken the geek-world by storm. It’s gratifying to see that my childhood and adolescence … and university years … and latter adulthood gaming with other aging man-children have not gone to waste and that role-playing is still a viable way to spend time.

The good folks at Critical Role have not only captured the hearts and imaginations of like-minded fans, such as myself, in fact, to the point where a crowdfunding campaign has given them an unprecedented yield to fund their own animated production, The Legend of Vox Machina. While the amount is substantial, what’s remarkable is that it was funded in such a short amount of time.

This is a story.

It’s also a story that needed to be addressed. I was quite fortunate to sit down and steal some of the time from two of the well-loved cast of Critical Role: Travis Willingham and Sam Riegel and ask them some questions about this phenomenal success.

PM: Over 10 million dollars raised is simply astounding in any amount of time (and that number increased as I was typing this). In a few hours, it’s simply unbelievable. What do you think is the reason for this success?

Travis: “That can be answered in one word: critters. When we set our target goal of $750,000 for a single animated special, we hoped we were picking a number that was achievable in 45 days. Our incredible Critter family showed us that even we have the ability to underestimate their passion for our ideas and projects, and their incredible outpouring of support thus far has put the world on notice. We always secretly hoped we’d be lucky enough to do more than one episode of animation for this project, but nothing prepared us for the undeniable battle cry that the Critter Legion has responded with so far. With just under 40 days left in this Kickstarter its certainly anyone’s guess where the final tally will land.

PM: Fans won’t give you the money unless they believe – what’s the personal meaning of this project for them?

Sam: “For as long as we’ve been playing this game online, the fans – the Critters – have taken a personal stake in its success. Sure, the streaming show is entertaining, but I think fans have made it more than that. They aren’t casual viewers — they have formed a strong and active COMMUNITY around the show. If one of us meets a Critter, or two Critters meet in the world, it’s an instant friendship. There’s an unspoken bond. Our community shares a genuine love of gaming, of fantasy, of spreading love through storytelling. For us, and for the fans, this next step – the animated series – isn’t just a cool project. It’s a validation of our ideals. It means bringing our misfit community into the mainstream and showing the world who we are. That’s why they have been so eager to support us.”

PM: Storytelling in an animated format is different from the storytelling you’re used to. What will the challenges of Vox Machina be?

Travis: There are certainly pros and cons to animated storytelling. One advantage is that we’ll all know generally where the stories begin and how they end. Our only real limitation will be time. Outside of the original story that will be told in the first two episodes, this process will be very similar to adapting a novel into screenplay format. With so much material to cover, the challenge will be deciding which beats and moments survive in the beginning of this Briarwood story arc. We’re already enjoying the review process as we look back at some of our earliest episodes. However, with 15 episodes totaling around 60 hours of story, there will certainly be some trimming that has to happen.

PM: You’ve blown your goal out of the water. Time for a re-evaluation of your project – will you be planning a series with this level of funding? Can you speculate on the fan response to that?

Sam: As we recently announced, the unbelievable outpouring of support has allowed us to move the goalposts a bit, and do something we’ve always dreamed of — dive into a full animated SERIES. We’ll be revisiting classic storylines from our streaming show, and expanding and adapting them into the animated series. Starting with the Briarwoods story arc, we have some amazing plotlines that could easily fill two, three, five, seven seasons of animation. I’m not sure what the final Kickstarter number will be, but we’re excited to expand our “special” into a real series.

PM: What do you think would be the reaction from fans if this opened the door to other campaigns?

Travis: We imagine the reaction would be very similar to our own, which would entail loud noises and jumping around uncontrollably. A recurring animated series for the Vox Machina campaign has been a dream of ours for many years now. The possibility of sharing our additional stories and characters that exist in this world of Exandria would be nothing short of a dream come true.

PM: Do either of you have any particular favourite parts of the (now) planned four episodes that you are looking forward to?

Sam: As of this writing, we’re already up to six episodes! Possibly more. I’m most thrilled that we get to unveil a brand-new Vox Machina adventure to kick off the series. Hardcore fans will get a new look at the characters they love, and experience a new story along with the rest of the audience. And for folks who have never heard of Critical Role, it’ll be an excellent entry-point to the world Matt Mercer has created, and our weird and wild characters.

PM: What do you think Fans will be particularly looking for with Grog and Scanlan performed in this format?

Travis: We’re hoping fans will be eager to finally see the animated Grog and Scanlan duo up to their usual hijinks. Whether out trying to remedy a situation, or send it tumbling into chaos faster than should be possible, these two are certain to find their way into trouble. 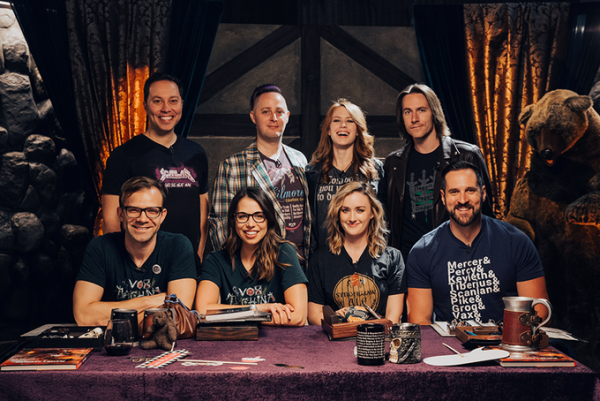 PM: This Kickstarter has changed perceptions in the entertainment industry, with small studios thinking that they may not need established studios for their projects – how are you prepared for being one of the reasons for this change in thinking?

Sam: Through the history of Critical Role, the fan response has always outpaced our expectations, and this Kickstarter campaign is no different. When we launched, we weren’t trying to “shatter the paradigm” of the entertainment industry or anything — all we wanted was to make a cool pilot episode! But if major networks and studios are waking up to this phenomenon, or changing their strategy as a result of our campaign — well, bring it on. We think we have amazing, engaging stories to tell to a mass audience. But there are also TONS of other small online shows, twitch streams, or comics and graphic novels that the big studios may have overlooked. Whether or not our show gets picked up by a major distributor, if we’ve changed their behavior or made them aware of these smaller “mom-and-pop” projects, then it will have been worthwhile.

PM: Animation gives you the chance to show action cheaper than live action visual effects. What scene from Campaign One would you think fans would want to see the most?

Travis: The Briarwood Arc is packed with action, but we would be remiss not sharing our excitement with exploring the events infamously known as watching our heroic gnome bard take on a house filled with guards as a Triceratops before setting it ablaze, is something you only find in The Legend of Vox Machina. Those events aside, some of the settings that We’re eager to bring to life are Castle Whitestone and the enigmatic Ziggurat underneath.

Sam: We have a wish list of actors we’d love to involve in the project and help flesh out our supporting “NPC” characters. Some folks have already expressed interest in participating, and we don’t want to mention those until the show is “in the can.” But rest assured that we’ll be inviting some amazing performers to fill out our voice cast. Recording sessions are going to be bananas!

PM: Sam, do you think you’ll keep one of the Trinkets for yourself?

Sam: The Trinket plushies (one of our kick-ass Kickstarter rewards) are the cutest things ever. And even though my character Scanlan despised Trinket — Sam Riegel actually loves him and can’t wait to own three of those plushies… one for each of my kids, and one extra just for me.

PM: Talk about if you’re psychologically prepared for being responsible for what could be the birth of a new and formidable IP in the entertainment world and how fans will respond to that change?

Travis: The events of the past few days were certainly unexpected but also extremely inspiring. It’s always a little scary when branching out from something you know into something that is new. For us, this is the realization of a dream that has been talked about for years as nothing more than a what if. By using the crowdfunding route, hopefully our fans know that the characters they love will be protected and their stories will be told properly. It doesn’t hurt that we’ve also surrounded ourselves with some of the best in the animation business by partnering with Titmouse Animation. We’re incredibly lucky to be able to revisit and retell these stories in a new medium, and were hopeful that this is only the first of many stories to be shared with a whole new audience.

Dungeons & Dragons was a fringe experience when I was growing up. It was something that geeks and nerds were teased about and had to do in hidden basements or the abandoned classrooms kind-natured teachers allowed us. We were safe, we were with friends but we had to do our own thing safe from the abuse of regular folks who saw this as either a strange thing they didn’t have the imagination to appreciate or comprehend.

Critical Role has brought D&D to the point where it is a more universally accepted entertainment medium. It’s acceptable to be a geek and to enjoy this fringe experience in mainstream culture and the enthusiastic response from its fans to move it an even more widespread medium of entertainment is not only just exciting, it’s right.