Next stop on our trip down DC vs Marvel memory lane is with longtime DC artist Dan Jurgens. Jurgens, probably best known for his work with Louise Simonson and Roger Stern on the Death of Superman storyline and for creating the character, Booster Gold, is a long time penciller, inker and writer of comics.

Born in 1959 in Ortonville, Minnesota, Jurgens got his start in comics as an artist on DC’s The Warlord in 1982. It wasn’t long after that, when he took over the scripting duties from comic legend, Gerry Conway, on DC’s Sun Devils. By the time the 90’s rolled around, Jurgens had created Booster Gold, penciled Green Arrow and was writing/penciling Adventures of Superman.

If that wasn’t enough, Jurgens, with a little help from a character he created (Doomsday) killed off Superman in 1992. The next few years would see a world without Superman, the reign of 4 Superman and finally the resurrection of the one true Man of Steel, long hair and all. All of this in time for 1995 when Jurgens and Claudio Castellini were approached to work on a secret new miniseries: DC vs Marvel.

I was fortunate enough to ask Dan a few questions about his involvement in the classic crossover.

Jman: How did you get involved in the project?

Dan Jurgens: Mike Carlin, my longtime editor on Superman, first gave me a call and told me what DC and Marvel were working on. He asked me if I’d like to take part. How could anyone possibly say no to that?

Jman: How long did it take you to draw your portions? Was there an approval process for your pencils? Any major editorial changes along the way?

DJ: In terms of time, things went along fairly well because of the way we divvied up the overall workload. Script was always there when I needed it and we had a reasonable head start.

Jman: How did the companies get along? Was it a cooperative project? Or a “constant looking over your shoulder” kind of thing? 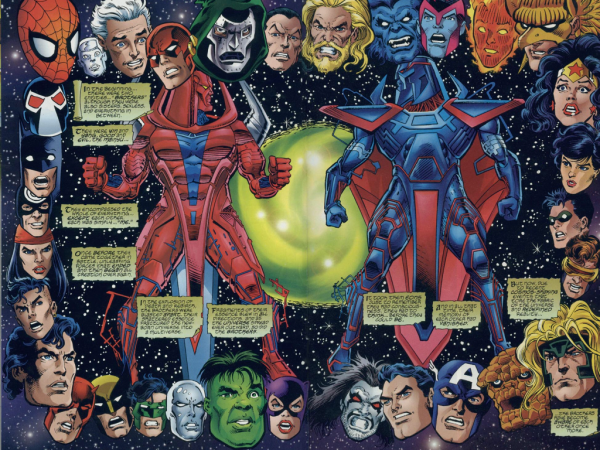 DJ: I never felt anyone was looking over my shoulder in the kind of way you mean. Obviously, on a project like that, there are going to be more people looking at what you do, but it wasn’t ever a problem for me. I had a good relationship with both companies and we all got along well.

As for how the companies got along, once again, my memory is that we got along fine and things were relatively problem free.

Jman: Did you have any direct input in any of the process?

DJ: Artistically, yes But I left the nuts and bolts of the story to Ron Marz, Peter David and all the editors involved.

Jman: Were there things either company didn’t want you draw?

DJ: Not that I recall. In essence, the basic idea was that one company’s characters shouldn’t look better or more powerful than the other’s. By the same token, we tried to balance the DC and Marvel characters on the covers. We tried to be very even handed.

Jman: Was there anything that you didn’t draw (or wanted to draw) that you would’ve liked to have seen make it into the books?

Jman: Looking back on the series now, any thoughts?

DJ: Only fond thoughts. I’m very happy and proud that I was able to be part of it. If it had been anyone else I’d have thought, “Aww! I wish I could have done that!”

Many thanks to Dan for taking the time to answer my questions.

Before you click on out of here, don’t forget to check out the reason for this season, the latest episode of the Almost Internet Famous Internet show that just happens to be about?  Yup…you guessed it.  DC vs Marvel