According to journalist Bill Flanagan in his 1996 rock biography U2: At the End of the World, in October of 1990 U2 had begun work on their seventh studio album, Achtung Baby. Reeling from criticism towards their on-the-road film Rattle & Hum and their own regrets about making said film, these early sessions were riddled with interpersonal tension, so much so that the band nearly called it quits. It wasn’t the first time (nor the last) that they almost broke up the band since they had almost done so before the recording of The Joshua Tree as well.

The fact that they did not break up can be attributed to the song “One” which was written as a meditation on the band’s struggle to stay together but which became their binding grace for through that song the members realized that they still had something that was worth salvaging. They stuck it through, finished the album and managed to create what many fans and critics still consider at least among their top two if not their very best album (the other one being The Joshua Tree, of course).

I’ve started today’s post with this anecdote from the annals of modern rock history because one of my favorite bands, Debs & Errol (creators of such wonderful albums like Ctrl+Alt+Duets  and Songs in the Key of Geek), whom I’ve written about on numerous occasions, recently came out with a bit of a shocker to their fans. They revealed that earlier this year they had seriously considered ending the band. But the way they went about this was interesting. Instead of just announcing it on their blog or Facebook page, they depicted this troubled period in a daily comic strip on their blog.

Since I’m such a fan, checking out their daily comic has become as regular a ritual for me as when I used to read Peanuts each day in the paper. But up until this break-up story arc the strip was never serious, always whimsical. And even in said story arc, they peppered it with humor to keep it from becoming overly heavy and depressing for their fans. Nevertheless, the sudden shift in tone and the unflinching honesty were almost shocking, especially for a band with such a geeky, happy-go-lucky image.

Happily, they have also announced that the band is not actually splitting up, but the break-up story arc really got me thinking about a lot of things. There are various important topics touched upon (depression, creative burnout, etc.), but for me it ultimately brought me back to contemplating one of my most fundamental beliefs: that in any collaborated endeavor be it a creative or business project, a friendship, a relationship—anything—the most difficult part is not the actual creative work. It is, as always, communication, the navigation of wildly different personalities and inner worlds.

One thing this story arc demonstrates is that emotional courage and a gentle kind of honesty can be the saving graces of any kind of relationship or partnership. But since human beings typically have so many issues keeping them from being completely open and honest, it is often a crisis or the threat of losing something important that jolts us into coming together and coming clean. And time and again I myself am continually amazed with what can actually be worked out between different parties so long as the willingness to listen—and I mean really  listen—and understand is present.

For this post I thought it would be interesting to compile all the daily strips of the Debs & Errol breakup story arc to be read straight through in one sitting. You don’t have to be a fan or even know who they are to recognize and sympathize with the themes being played out here. And certainly, if you’re an artist who’s ever been involved in a long-term collaboration you’ll be able to relate on some level. (To see the band members’ personal annotations throughout this arc, check out the comics on their own website).

So here’s to Debs & Errol for daring to be open and honest with their fans and with each other. And here’s hoping that this leads to their own creative triumphs to come, their own “One”—their own Achtung Baby. 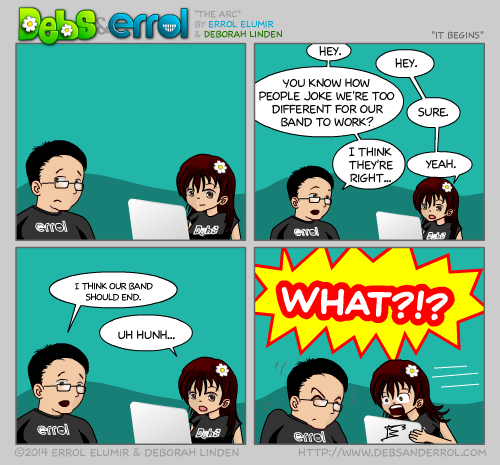 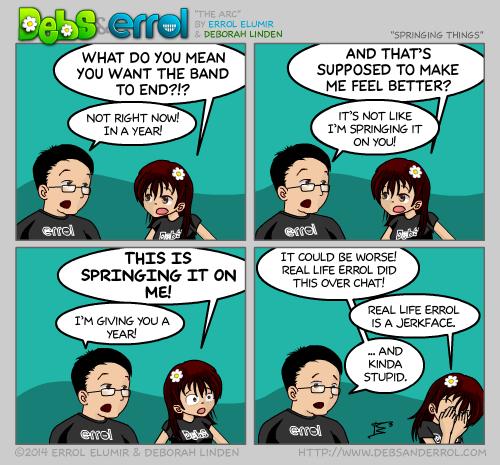 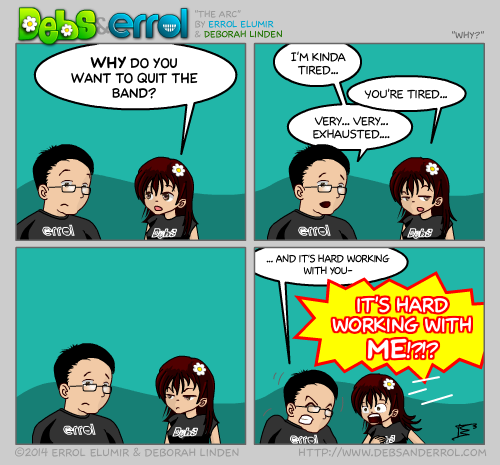 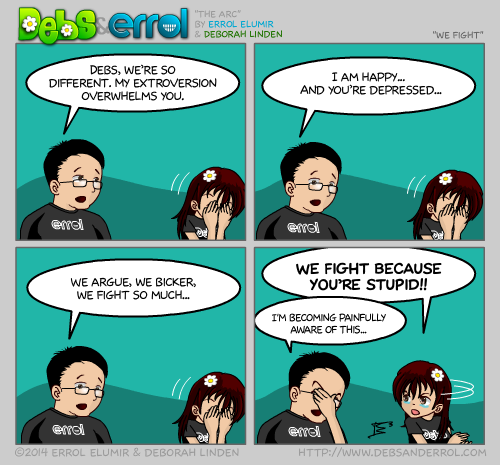 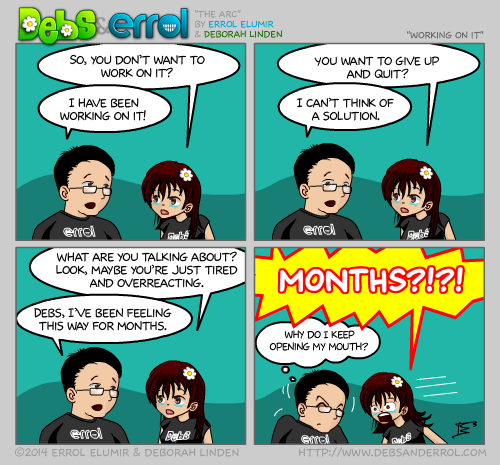 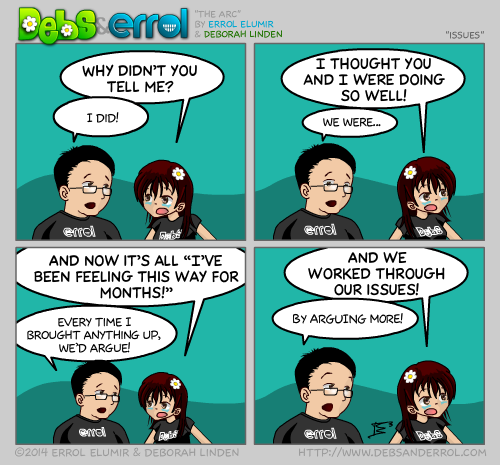 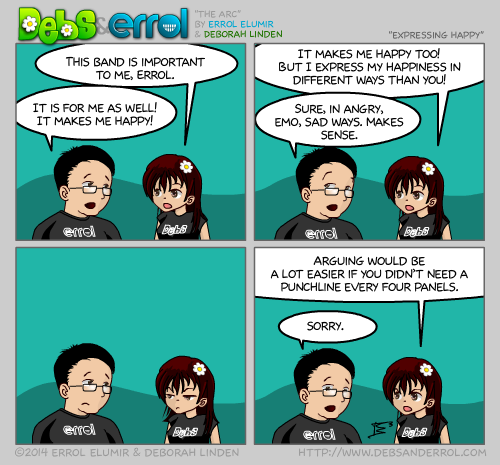 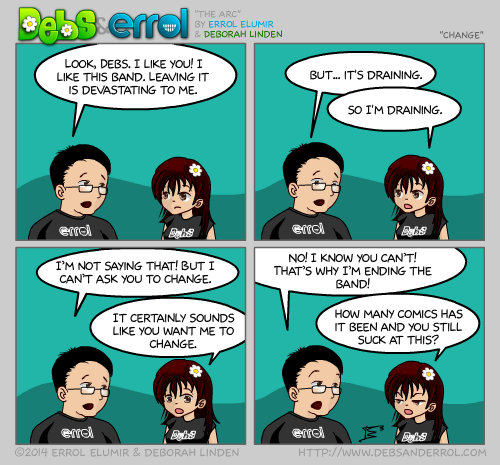 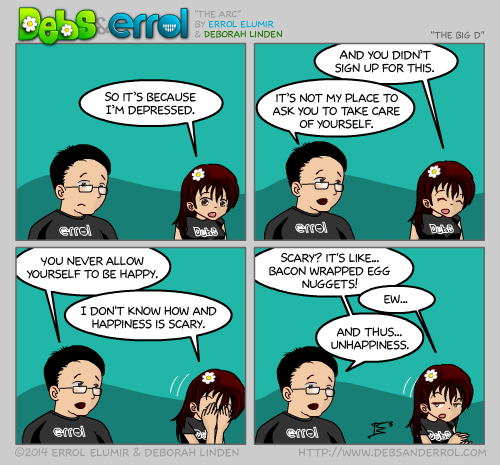 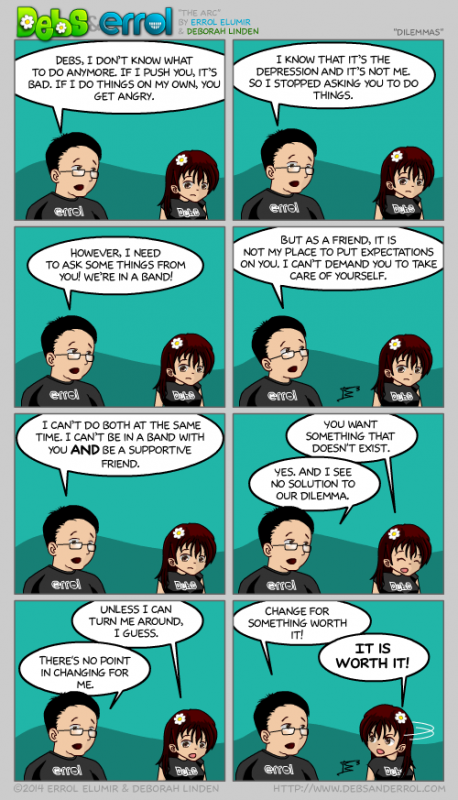 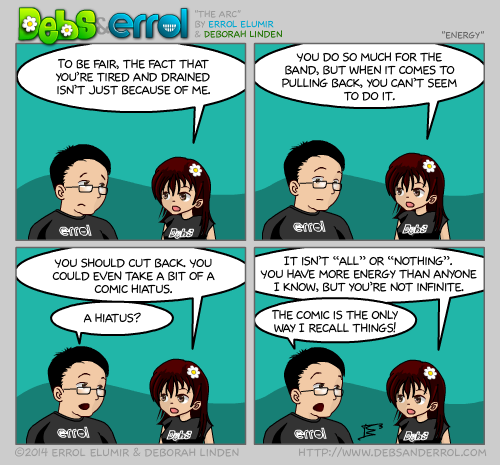 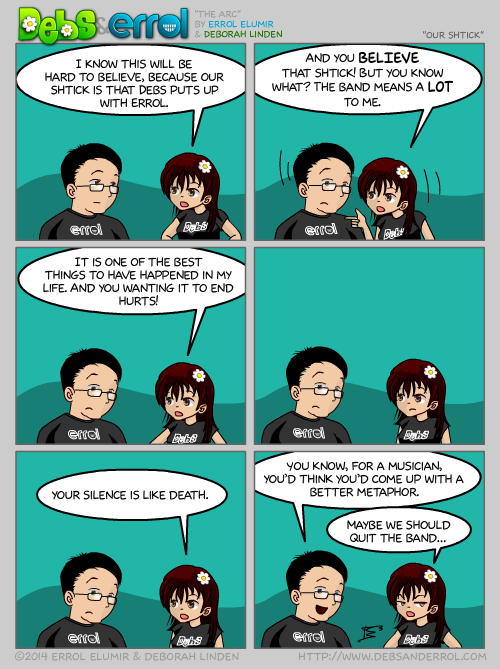 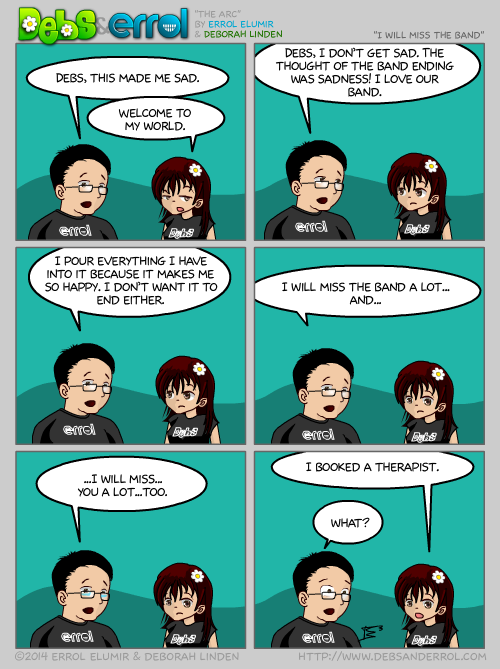 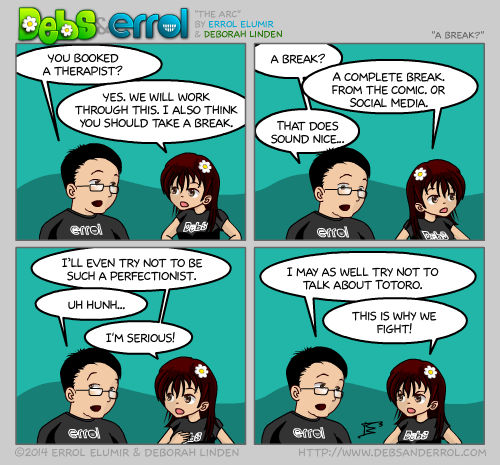 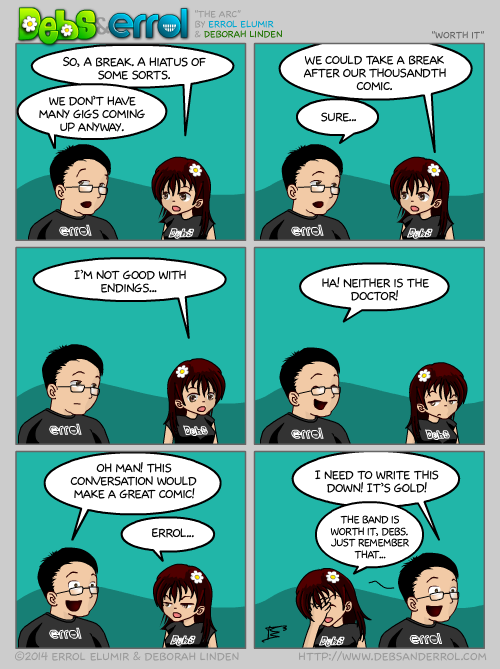 One life with each other

One life, but we’re not the same