Bro, Diamond Select’s Avenging Hawkeye is right behind you, bro 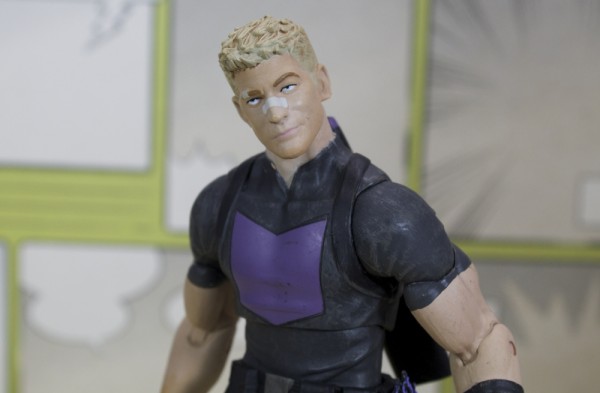 I’m not entirely sure, but this could be the figure I’ve been waiting for my whole life.  Yeah…I know I say that a lot, but this time I totally mean it.  I’m talking about Diamond Select’s Marvel Select Avenging Hawkeye.  Don’t let the name fool ya.  It’s totally based on the Clint Barton you know and love from 2012’s Marvel Now! initiative.  Yes…I’m talking the Hawkeye based on writer Matt Fraction and artist David Aja’s stellar (and award-winning) run on Hawkeye.

The attention to detail on this figure is pretty impressive.  But, that shouldn’t be too surprising if you’re familiar with DST’s 7-inch scale Select line at all.  From the beat up folds in his fatigues (and t-shirt), to the multiple arrows in both quivers, DST’s level of detail really gives the figure a realistic feel.

Clint’s wicked articulate, too.  He’s got that nice ball joint shoulder/pivot joint bicep combination, so he can reach over his shoulder to grab an arrow.  DST also set him up with double hinged knees and a pivot in his feet to make his poses that much more dynamic, and arrow-shooting friendly.

What I like about DST’s Select figures, though, are the amount of accessories they’re packed with.  Avenging Hawkeye comes with a nice selection of stuff; an alternate hand, gun, bow and 6 arrows.  He also comes with an alternate head with a bandaged, beat up face.  I much prefer the bandaged face head, to the head with the purple sunglasses.  There’s something about it that’s a bit off.   I think the lens are just too far apart.  He looks a bit too Neo-ish for my liking.  But no fuss no muss for me.   Just pop off the head and put on the bandaged one.

What really  makes the figure, though?  Clint’s “adopted” dog, Lucky (aka Arrow, aka the Pizza dog).  Right from the pages of the book, Lucky saved Clint’s life, took one heckuva beating from his former owner (a member of the Tracksuit Mafia, bro) and Hawkeye returned that favor by saving Pizza dog’s life, rushing him to the vet.  After multiple surgeries, Lucky eventually pulled through and has been forever immortalized in plastic.  Lucky isn’t articulate or anything, but it’s a really nice touch by Diamond Select.

There really isn’t much not to like about this figure.  If I’m being nitpicky, I might’ve preferred Clint in his more casual attire, wearing his purple chucks.  But, this is as good of an homage to Fraction’s Hawkeye as we’re ever gonna get, so I’ve got no real complaints.

Hasbro came out with a kind of variation of the Marvel Now! Hawkeye back in 2013 as part of their Legends line.  But, believe you me, it’s nowhere near the level (or comparison) to DST’s Marvel Select figure. Bro, get Avenging Hawkeye before it’s too late, bro.

But wait! Before you head on out of here, don’t forget to check out my highlights from 2015’s Toy Fair!