One of the knocks on “genre” literature—fantasy, science fiction, horror, detective, etc.—is that women get short shrift. Female characters have been traditionally cast as one-dimensional sex objects who are won by the hero as he completes his quest. This is particularly true of classic pulp novels, whose covers always showed a busty woman with her clothes hanging torn, in the clutches of some villain, waiting for the hero to save her. But those days are long gone, and there is no better evidence of this than Dangerous Women, an anthology edited by George R. R. Martin and Gardner Dozois.

Fiction anthologies (like the one in which my own work appears  tend to be a little uneven, with some standout stories and a fair amount of filler. Not Dangerous Women. Every piece in the collection is written by a heavy hitter with multiple strong-selling novels under his or her belt. Each story provides a unique take on the anthology’s theme.

I suspect that many readers will be attracted by the stamp on the book’s cover: “Includes an All-New Game of Thrones Novella.” Fans breathlessly awaiting the release of The Winds of Winter will have to make do with this for now since we have no idea when that book will actually come out. 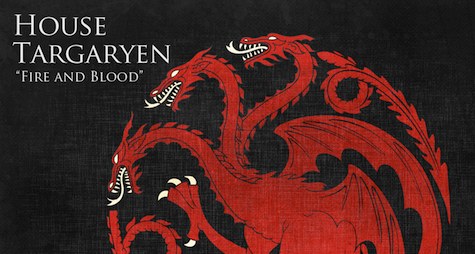 “The Princess and the Queen” takes place a few hundred years before George R. R. Martin’s A Song of Ice and Fire series. Written as a history, the story describes a pre-Game of Thrones era Targaryen civil war known as “The Dance of the Dragons” (not be confused with the 2011 novel A Dance with Dragons (which I’ve also reviewed on this site).

After the death of an old Targaryen king, his wife battles her stepdaughter for the Iron Throne. Much like the later “War of Five Kings,” this is a bloody war featuring a complicated and ever-changing system of loyalties. The big difference here is dragons. Both sides have them, which completely alters the style of medieval warfare seen in A Song of Ice and Fire. The dragons steal the show here, and Martin provides deeper insights into their biology and general awesomeness than in his novels. The story also shows that the all-out power struggle of the “War of Five Kings” is nothing new, and that war is much more a matter of brutality than bravery. The plot is a bit unwieldy, though, for a story of this length; it is virtually impossible to keep the characters straight, although this is probably not necessary. I imagine anyone unfamiliar with the novels might be turned off by the barrage of names, but the story provides some interesting context for fans of the series.

The best story in the collection is “Shadows for Silence in the Forests of Hell” by Brandon Sanderson. Sanderson constructs a terrifying fantasy world in which shades, undead shadow-beings, fill the woods around Silence Montane’s inn. The shades leave people alone unless they shed blood, start a fire or run. Those who break these three rules must either defend themselves with silver or be turned into shades themselves. The only people who dare pass through these woods are outlaws. Silence is able to maintain her supply of silver and provide for her daughters by moonlighting as a bounty hunter. As if taking down hardened killers wasn’t bad enough, Silence must do it without attracting the attention of the shades.

A few too many stories resorted to the tired succubus trope, although they were all handled with more complexity than one normally sees. Some of the deadly women are all-out butt-kickers, like the western outlaw in Joe Abercrombie’s  “Some Desperado” or the Soviet fighter pilot in Carrie Vaughn‘s “Raisa Stepanova.” More often, though, the stories dealt with ordinary women in extraordinary circumstances. The protagonists of these stories were often older women, such as the widow whose dementia came with the ability to see into the distant future, Megan Lindholm’s “Neighbors”, or the nurse who holds her own in a male-dominated post-apocalyptic dystopia in Nancy Kress’ “Second Arabesque, Very Slowly.”

This is a fun collection featuring the best writers in the business. If you’ve had your fill of damsels in distress, I encourage you to give Dangerous Women a try.