Don’t Go Back to School – Review 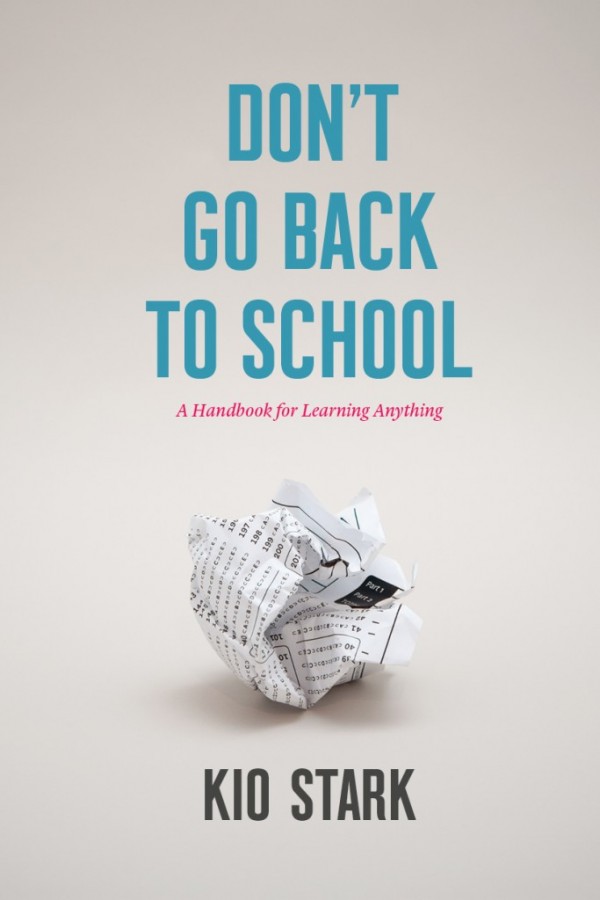 By my junior year in high school I had concluded that most of my formal education had been pretty much useless. After graduating, when everyone else was scurrying off to college, I took a year off in which I tried to give myself the kind of education that I believed school had failed me in. I read non-stop, everything I could get my hands on, and while my methodology was a bit haphazard, I honestly believe I learned more during that period than in four years of high school.

It was, however, a very isolated process and I eventually came to long for the interaction and dynamic exchange of ideas that can only happen in a social setting (mind you, I didn’t even have a computer at the time). It’s this, more than anything else, that spurred me to go to college after all – a very progressive one, almost radical even, so as to ensure it would be nothing like my high school experience.

The social aspect has always been one of the primary benefits that institutional learning has offered, along with a ready-made infrastructure in the form of curriculum, physical resources like libraries, and plenty of opportunities for networking. It’s for this reason that I’ve fantasized, on and off, about grad school for over fifteen years, not so much for the learning, which I feel I can do fairly well on my own, but for the resources, the connections and, to be honest, the prestige. But with tuition fees and student debts spiraling out of control, depressingly low employment rates and increasing skepticism about the concrete benefits of a graduate degree (at least in the liberal arts), I kept putting it off, even when I got accepted to film school at NYU. By now, I’ve pretty much let go of the desire. I’m still interested (who knows, it might happen) but I’m not attached to the idea anymore.

Enter Kio Stark’s Don’t Go Back to School: A Handbook for Learning Anything, a book that aims to show people how they can still tap into the same kind of social and infrastructural benefits that school offers without actually going.  Stark isn’t against going back to school per se. Rather, she believes that if you don’t (or can’t) for whatever reasons, it’s no reason to mourn. It doesn’t mean you will miss out, necessarily, on a world of opportunities.

The meat of the book is an array of interviews with autodidacts from diverse fields in the arts, humanities, sciences and business. Their paths and chosen learning methods are various enough that most independent learners will be able to recognize aspects of their own experiences in these interviews as well as pick up some useful new tips.

Sandwiching the interviews are, first, Stark’s impassioned argument for the validity of independent learning and, second, a systematic explanation of different approaches and methods of study as well as ways to access infrastructural resources that once used to be the monopoly of schools. I found this section tremendously useful in that I now have a vocabulary to describe processes that I had heretofore used mostly unconsciously, like “project-driven learning” and “associative learning” (both of which I used to create this website despite being a technical dummy).

Those for whom this book might be less useful are people whose desired careers require licensing or certification – lawyers, medical practitioners, etc. – and Stark admits that for such folks there’s simply no other way than to find a way to go to school. But if your chosen field or avocation lies in the arts, humanities, business and even some of the sciences, then you’re in luck (unless you want to teach one of these subjects, in which case… do go back to school). And, of course, any kind of learning for learning’s sake or to simply better oneself is also well served by Stark’s approach.

Don’t Go Back to School is one of those books that, for me, as a self-proclaimed autodidact, touches a deep, personal nerve.  And I imagine that it will be a practical, inspiring and self-validating read for many others as well.