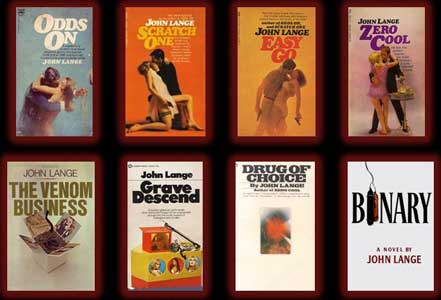 Michael Crichton, a household name in thrillers, is probably best known for his works that made it to TV and movies: Andromeda Strain, Jurassic Park and ER.

Here we look at three of the eight selections being released this month, Scratch One, Easy Go and Grave Descend, originally published in 1967, 1968 and 1970, respectively.

Scratch One is set in the ultra-glamorous French Riveria of the late sixties, complete with the de rigueur Ferraris, casinos, the Monte Carlo Grand Prix, and an appearance by Crown Prince Rainier and his consort, Princess Grace.  The plot involves an arms shipment to the Middle East, just prior to the Arab-Israeli war of 1967. The novel opens with a rapid-fire series of assassinations by the shifty Arab faction trying to prevent the shipment. The putative British and American good guys – who, being from the LBJ/J. Edgar Hoover era, leave a bad taste in your mouth as well – then step in to “facilitate” the shipment through whatever means necessary.

Our hero-cum-playboy Roger Carr is mistaken for a US agent and thrown unwittingly into the fracas, as the American consulate decides to take advantage of the mistaken identity and use Carr as bait.  Carr, with the help of a Bond-girl style love interest, rises to the occasion and acquits himself stunningly if a bit clumsily, amongst all the professional criminals and hit men.  The story is shot through with an Ian Fleming brand of intrigue and shimmers with that vintage Ursula Andress quality of sexy that is much more about equity than commodity.

This is pure, high-octane entertainment. Truthfully, we enjoyed it far more than we  ever did his more recent works that tried, but usually failed, to plausibly incorporate some cutting-edge scientific methodology, like Jurassic Park.

In Easy Go, we travel to Luxor, Egypt and the Valley of the Kings to uncover a lost pharaonic treasure.  A brilliant archeologist by the name of Harold Barnaby has made a tantalizing discovery while performing a rather humdrum translation for the Egyptian Museum of hieroglyphics written on a papyrus recovered from the Tombs of the Nobles.

In addition to the original message, Barnaby notices a second message encoded diagonally that appears to reveal the location of a secret tomb for an unknown pharaoh who ruled in the chaotic times between the premature death of Tutankhamen and the rise of Ramses II.  Barnaby is tempted to locate and keep the treasure for himself, however he has no idea how to accomplish this, that is until he meets our hero, Robert Pierce.  You see, this is a more modern Egypt, thoroughly sick and tired of its national treasures being carted off to various American and European museums, and having clamped down on exports across its borders.

Pierce comes up with the canny idea of simply hiding the treasure, and then blackmailing the Egyptian government with the decidedly below the belt threat of offering the artifacts to the museum in Tel Aviv.  He obtains financial backing from a rather debauched earl, Lord Grover, and the party, along with a supply of comely lasses, set off for the desert near Luxor to search for the tomb.

Grave Descend follows diver James McGregor who’s been hired to investigate the sinking of a luxury yacht named Grave Descend. At first, it appears to be a simple tragedy but, as you’d expect, a conspiracy arises. Secrets protect the truth and villains emerge from the shadows to unveil malicious goals. Not one of the wreck’s survivors tell the same story, nothing adds up and a mysterious cargo seems to be at the center of it all.

This is  a short, brisk read. Some will get through it in a day. As such, it’s quite the page-turner. There’s a plot twist every 5 or 10 pages rather than a scientific treatise like in some of his later works. It’s exciting and pulls you along, but some of Crichton’s old weaknesses hinder this book from being all that it could be.

Characters lack depth and are motivated by shallow reasons. Of course, pulp fiction in general relies a lot less on character and more on plot, but even compared to characters famous in the genre, the ones in Grave Descend come up short.

However, fans of pulp fiction will find this book to be, on the whole, decent and enjoyable. To use another food metaphor, reading it is like eating chicken nuggets – satisfying, pleasurable, and filling…but not exactly a Thanksgiving feast. [subscribe2]