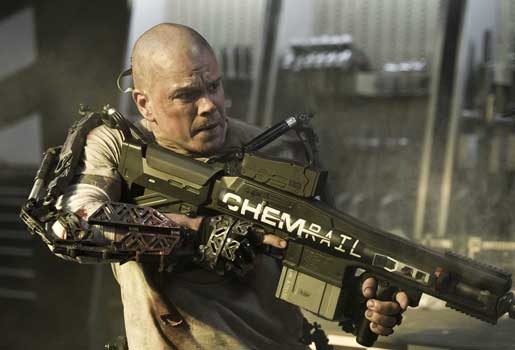 Between District 9 and Elysium, Neill Blomkamp has demonstrated an exceptional talent for creating worlds as political allegories, and then placing those allegories aside for action sequences. While District 9 was a low-budget surprise, the bar for Elysium is set much higher and, unfortunately, the movie fails to meet either its ambitions or expectations.

The first 30 minutes of the film quickly and very directly establish the rich vs. poor dynamic for the world, an extreme amalgamation of the 99% Movement and Atlas Shrugged. This central theme is interesting to run with, despite the numerous plot holes big enough to drive a luxury space shuttle through, yet the remaining 90 minutes push the premise out of mind for a standard last-stand sci-fi action flick.

Visually, Elysium is a marvel. From Matt Damon’s exoskeleton to the animalistic movements of the police droids, the effects of the film are gritty and authentic. Explosions, punches and gunfire have a weight typically absent from films that don’t feature normal humans. Thankfully, unlike almost every other event movie of the season, Elysium uses its R rating to show the consequences of its explosions and gunfire. There are no grazes or bloodless stabbings in this film. When a grenade goes off, so does the flesh. The result is grotesque but earned, and adds considerable intensity to the action. Yet the action sequences never climax as mightily as they should. The film lacks that final gear to become something epic rather than decent.

Similarly, Elysium never peaks within any of its elements. The quick establishment of both Earth and Elysium should allow time to discover, but we see more than a sliver of either. This may be to the characters’ experience, but it’s a shame to take the trip and depart with so much unseen. Similarly, characters are nothing other than their designated roles: Frey is all which is good in the world, Carlyle is a cartoonishly evil industrialist and Kruger, while delightfully and disturbingly psychopathic for no reason other than he’s a psychopath, plays far too big of a part. Once the psycho takes over, everything else becomes either background noise or pointless.

What appears on screen is pretty good. There is even greatness somewhere beneath the surface. But the film doesn’t do the needed digging to bring out its potential. Elysium definitely packs a punch. It just doesn’t know where to aim. [subscribe2]