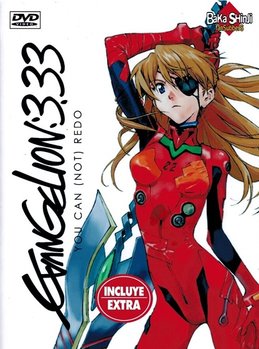 Two things which make this review difficult: (1) the threat of spoilers, but we’ll keep this vague and (2) describing these characters without referring to the original series. And that’s the biggest problem with Evangelion 3.33: You Can (Not) Redo. There’s a theme and an arc, which are then squandered. In all, Evangelion 3.33 is that most unfortunate of films – one with dynamite potential, but does nothing with it.

Evangelion 3.33 is a bold shift from the world established in both the original series and its direct predecessors. This shattered world promises exploration and progress. That promise is unfulfilled. Instead the film barrels ahead with a story so packed and predestined that it becomes dull. Evangelion has never explained much, but it at least implied, at times far too blatantly. 3.33 provides neither.

It does however spend 30 minutes showing off its newest weapons and machines. Rather than provide background so the audience can understand and appreciate such a radical change, we’re given whiz-bang battle sequences that amount to “Hey, look how cool our animation is.”

And the animation is cool. The only progress from 2.22 comes in production. The crisp, tight and traditional drawing mixes with controlled and unobtrusive computer art into a prototype of how modern animation should operate. Like the story, the art may not always be clear but, unlike the story, that lack of clarity offers no hindrance to enjoyment. In fact, it is the enjoyment.

But then there are these characters. 2.22 displayed individualization from their previous selves and archetypes. 3.33 resets everyone. Misato and Asuka make a logical progression and Rei’s reversion is necessary yet they are all one-noted players. Mari remains nothing but action eye candy. This is all meant to isolate Shinji, which it does, but he is still not dynamic or real enough to be engaging. He’s no longer pathetic; he just lacks any sense of broad consequence. His eventual break should be gradual, from the start, not immediate. The relationship Kaworu is nicely staged, but, like the characters, is abstract for anyone who isn’t a longtime Evangelion watcher.

The final film has so many questions and so much story left to cover that 3.33 issues with character and pacing will likely worsen. This poses its own question: if the audience isn’t already invested, will it be worth doing so now?