FAWM 2015 Week 3: my favorite songs (or How I Learned to Stop Worrying and Write a Song 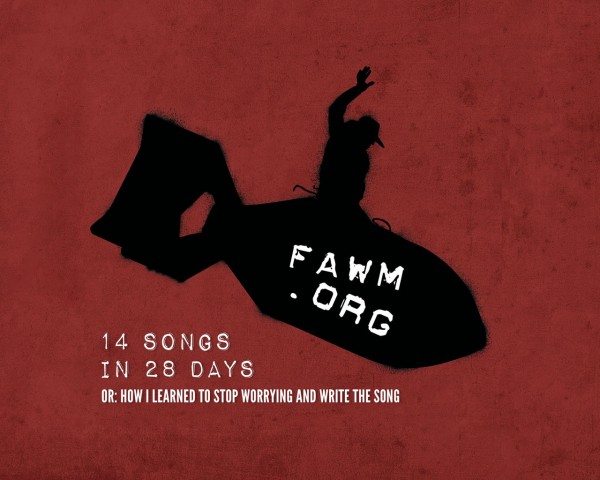 For Week 3 I set three rules for myself:

1. Limit one song per artist (or two if the songs are collaborations).

2. Focus more on artists I haven’t covered before in my Week 1 and Week 2 posts.

3. Keep the intro and descriptions as short as possible so as to fit in more songs.

Also, this week I let myself not worry about whether a song was actually posted during Week 3 or earlier. If I loved it, I loved it.

First, I want to group the songs of a challenge that I hosted in its own section because they’re so coherent together.

On FAWM, a “challenge” is just that. You post a theme or idea and artists who are game sign up. I posted a #Top40 challenge wherein each artist would be assigned an act from Billboard’s Top 40 list and then they’d have to try to emulate that style while still writing a completely original song. The result: each and every submitted song was both a personal favorite of mine as well as one of the artist’s own favorites as well.

Bithprod here was assigned Sam Smith but it doesn’t matter if you don’t know who that is. The song is gorgeous.

@seemanski “Too Much, Too Late”

Seemanski was assigned OneRepublic and nailed it! I can honestly say that with all these Top 40 challenge contestants I prefer the FAWMers’ versions to the original “inspirations.”

@toms  “In Summer We Will Be Free”

Walk on the Moon was the artist for Toms’  challenge. Listen to the original song “Shut Up and Dance” and see if Toms didn’t hit it out of the park with the synths, catchy hook and 80s feel.

For his challenge, Vom was assigned Fall Out Boy and so uncannily emulated the feel of their current chart-topper “Centuries” while parodying the title that it made me laugh.

My “If Only” Skirmish

It was a busy week. I also hosted something called a skirmish in which the host announces a song title and the participants have an hour to write a song. The title I assigned was “If __ Only Knew,” and the artists had to choose the pronoun (I, You, They, etc.). These were my favorites from that session.

@njihe “If You Only Knew”

Njihe’s from Finland and for her entry she chose the pronoun “you.” What’s impressive about this is that it’s her very first skirmish and her first song in English.

@scubed  “If I Only Knew What the Morning Knows”

@scubed turned in a beautiful song about knowing “what the morning knows”—that each day starts fresh and pure without the burdens of the previous day unless we ourselves hold onto them.

@standup  “If It Only Knew”

@standup chose the pronoun “it” and crafted this Roxy Music-esque 80s love song to a computer.

@ampersandman  “Calm Down. Come Over”

The cool, pulsating delay effect at the beginning of this song just grabs you and, at least for me, doesn’t let go.

Do I have to say anything? It’s Dracula.

Can’t have Dracula without Frankenstein. This is like “Monster Mash” crossed with fight music from the Batman TV series. Delightfully danceable surf rock.

A bit experimental yet still eminently listenable. Play it all the way through to enjoy the song’s various progressions.

Quick, gimme a drug, any drug. Just kidding, you don’t really need it with Candle Experience whose sonic experiments are among the closest approximations of space travel that I’ve encountered.

Just more good stuff from a personal favorite artist. Quite different in feel and sound from her others this year.

@chocolatechipsmusic “I Found My Happy Place”

Lovely collaboration from a personal favorite and a new discovery. Wintry mysticism.

Like Wendy Carlos’s Switched on Bach but with opera. Conjures all kinds of quirky sci-fi images in my mind.

Displays some wonderful pop influences while being its own thing entirely, thanks in part to The Cow Exchange’s quirky lyrics and sense of humor.

@danvaillancourt   “Crows in the Snow”

This song makes me ache for half-remembered dreams of innocent youth that never occurred. But the song is so lovely that it’s almost as good as the actual experience I didn’t have.

Folk artist Darci Strutt has used the clever and fun idea of using Rory’s Storycubes to write songs. She’s written three this way and they’re all marvelous but this one’s my favorite. (Also check out my collaborations with her!).

Beautiful, depressing Disney-esque song which, come to think of it, isn’t very Disney-esque, is it? Dawn is the daughter of Darci Strutt (directly above). What a remarkably gifted family.

@deafsteever  “I’m on That Train”

Okay, this will be my one long commentary in this article. So sometimes non-religious music lovers who enjoy gospel feel slightly odd about the perceived discrepancy between their personal beliefs and the undeniable beauty of the music. They sometimes preface discussions with something like, “Well, I’m not Christian, but…” And for this reason they also tend to hold back from the participatory aspect that’s such a fun part of the gospel music experience.

I totally understand but would like to offer a somewhat different perspective that’s still secular: imagine that the energy, the sense of joy created in the music, is God. It is the mystical creative force within us all and by making and enjoying music together we are calling it forth into existence. So when the artist shouts, “Hallelujah!” you can shout along “Hallelujah!” and really mean it without feeling like you’re doing something religious.

Debs is so good with these skirmishes. In this song she seamlessly fuses elements of soul, reggae, latin and traditional European folk such that it sounds like all of them at the same time. Mmm-mm.

Ever feel like giving a crappy venue the middle finger? How about while  you’re performing? Ask Devin for the sheet music.

Without me giving it away see if you can figure out the inspiration for this one. The title alone is a pretty big hint.

@errol @philnorman “This is Our Collab”

Made me LOL. Also very meta. Imagine a musical about FAWM in which two of the FAWMers agonize over collaborating with each other. This would be the scene and the song. Oh, and @cowex (see above) gets a shoutout.

Very nice old school hip-hop piece all the more impressive because this guy does mostly rock. Turn up the bass and check out that opening: that is the sound of one giant, thundrous ass shaking.

Since I limited myself to one solo-written song per artist this week I had a very hard time choosing one for Meri Amber since every one of her songs blows me away. But I chose this.

I checked out this artist by @sapient’s recommendation and was not disappointed. He lists both Rachmaninoff and black metal pioneers Emperor in his list of influences and he wasn’t kidding.

Owl is one of my favorite FAWMers and she outdoes herself in this truly wonderful song that combines geeky elements like Labyrinth and The Secret of NIMH with childhood nostalgia. The chorus magnificently simulates the kinesthetic harmony of team rope skipping.

Literally the funkiest song that I’ve heard on FAWM. Get down, get down.

I think this should be the official theme song of FAWM for the spirit of collaboration and sharing that it conveys. Really.

So, yeah. This happened. In mid-Week 3 I officially crossed over to the Dark Side and became a FAWMer. And, yes, this really was my first attempt with lyrics unless you count bad free verse poetry written in college and one so-so spoken word piece that I once did. As for the music I only have two words: it’s Sapient.

And not to toot my own horn here too much but Valerie Cox’s rendition of my reimagining of the exile from Eden is as perfect as perfect can be. No, this song isn’t “satanic” *eye roll*.

@robynmackenzie  “You Me and a Quinoa Burger”

This was one of the songs from Week 2 that I loved but lost track of. Thank the vegan gods I found it again. See, now *this* song is satanic. She even says, “Sell your soul to seitan”!

Kindermetall. I dare you not to smile while listening to Sapient’s collaboration with Ina, the 7-year-old daughter of his friend. De de de de de de.

The Gilbert & Sullivan-esque music of @timfatchen is an ideal companion to the wit and storytelling of @stephenwordsmith’s lyrics. This song should be called “Ir. Resistible.”

I really wanna write some lyrics for this guy. Man, this song is awesome. It’s the sound of a sentient computer pondering the nature of its existence. Super cool.

Valerie’s the one who wrote the music for my Lucy(fer) song so it’s no surprise this is as catchy as it is. Besides, she says “FAWM slut.” More than once.