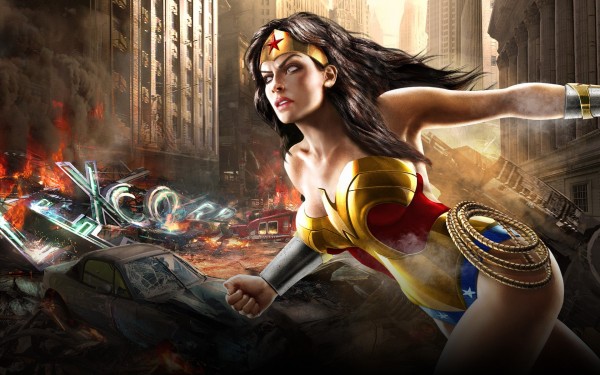 As we draw ever closer to this year’s San Diego Comic-Con, fans are reaching fever pitch for the upcoming Warner Bros. panel with the cast of Batman v Superman: Dawn of Justice. One thing fans are anticipating is finding out exactly how big of a role we can expect from the appearance of Wonder Woman. The Amazonian warrior also known as Diana Prince will make her big screen debut in the upcoming slugfest, and as we all know she’ll be played by former Miss Israel and The Fast and the Furious star Gal Gadot. “There are so many expectations for this character, it’s impossible not to be a little nervous about it,” the actress told EW. Gadot is the first person to don the famous gold, red, and blue costume since Lynda Carter in 1979, unless you count the never aired 2011 pilot with Adrianne Palicki (we don’t).

Despite being one of the oldest and most recognizable female superheroes in history, the character has never appeared in a live-action theatrical film. In fact, the only time we’ve seen Wonder Woman on the silver screen was a brief bricked-out cameo in 2014’s The LEGO Movie. In gaming, at least, the character has been a bit more well represented. For instance, she has her own title on the gaming platform InterCasino along with Batman and Superman, and of course there are her appearances in popular titles like Injustice: Gods Among Us and Mortal Kombat vs. DC Universe, so it only makes sense for DC Comics to expand its scope and profit from these heroes on the big screen.

Dawn of Justice director Zack Snyder is adamant that fans will see plenty of the lassoed lady-hero in the new film. “She plays a super-important part,” he said in the aforementioned EW article. “In a lot of ways, she’s the gateway drug to the rest of the Justice League.” We’re curious as to what this bodes for the bracelet-wearing demigoddess and we hope they won’t be pushing yet another sister to the sidelines in favor of plotless fistictuffs. It’d be nice to see the film work to build some characters as opposed to merely making them tokens or motivational props while Superman and Batman explode things but this is Zack Snyder we’re talking about.

Batman v Superman doesn’t even come out until 2016, so there’s a lot of time to speculate about what’ll happen in the meantime. A Screenrant article noted that Affleck may be in talks to direct the next film in the Batman solo franchise in 2018. At this point, though, news of the Argo  director’s involvement is little more than gossip.

Batman v Superman: Dawn of Justice is scheduled for a March 25, 2016 release while the official Wonder Woman film is set to hit theaters in 2017.