Geek communities become agents of change in the fight against cancer

The Star Trek Fan Community is a close-knit one. People from across the continent, across the world, will reach out to each other, regardless of the circumstances, in support of a mutually agreeable issue. It’s a noble phenomenon and for one representative on the 2016-2017 Children’s Miracle Network Champions Tour, it was definitely evident.

First, some background. The Children’s Miracle Network of Hospitals is an organization that fundraises for children’s hospitals across North America with a vast array of corporate sponsors, like Walmart, Marriott, Inc., Air Canada and others. Once a year, patients (and their families) of these hospitals are gathered together in Florida for a massive fundraising event that not only celebrates the efforts of these fundraising partners but also the strength and courage of these Champion Children who were treated or, in some cases, whose lives were saved by these incredible hospitals. These are young heroes who have endured great tribulations and are worthy recipients of the celebrations this event hosts. 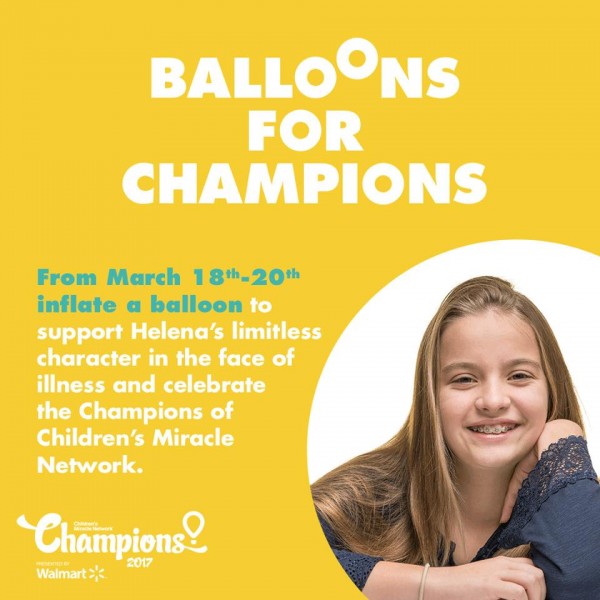 Helena, now eleven years old, is one of these kids. Diagnosed with acute lymphoblastic leukemia before she was four, Helena underwent a five-year protocol of treatment that involved over 864 non-stop days of chemotherapy. She survived cancer but endured spinal taps, surgeries and other insidious side-effects and ailments that cancer can bring to bear on a sufferer. As a survivor, she now represents the hospital and organizations that helped her on her journey and advocates for additional funding for childhood cancer patients. It was a horrendous experience that was made bearable by the kindness of friends, family and in some cases, complete strangers.

Geek culture fans were often sources of many of these kindnesses. When you see members of the Star Wars fan club, The 501st Legion, fundraise for the Make-A-Wish Foundation, or the Dr. Who Society that fundraises for the Hospital for Sick Children (aka “Sick Kids”) here in Toronto, it’s definitely a vibrant and prolific example of community outreach.

Not to be left out, Star Trek community members also feature prominently in this well-received, elite group of philanthropists. When Helena was ill, she often indulged in fantasy to help her get through the lonely days. She is a nerd-culture fan. When she couldn’t go out to play with other children because of a diminished immune system, all she had were her parents, Star Wars, Lego, comics and Star Trek.

Helena was asked to be the Children’s Miracle Network Champion Child 2016-2017 representing Sick Kids and sponsored by Wal-Mart. She is in remission and has been for the last two years. But Helena has friends who are still fighting their battles and she feels their struggle most keenly. It was a responsibility she was very excited to accept. Though she would have to make many speaking engagements, the thought of addressing audiences in the hundreds, and sometimes thousands, was nothing to the battles her friends are still fighting.

When one Star Trek fan, John Caballero, learned about Helena’s cause, he was very eager to arrange a rewarding experience for this child that she would appreciate. While Helena is an eager geek culture aficionado in her own right, much like John, she also shares his love of science and technology. John is the Network Systems Engineer for Enterprise Florida, Inc., a non-profit organization that expands business opportunities within the State of Florida and is also the official State economic development organization.

John spends his spare time producing and promoting the Star Trek fan film, Horizon. Set in the same time as Star Trek: Enterprise, this fan film tells the story of a young association of planets, prior to the Federation, that faces war with the Romulan Star Empire. Created by Tommy Kraft, it’s a testament to the love these fans have for their fandom.

Enterprise Flordia, Inc. contacted Space Florida and related to them about Helena’s cancer journey and how she turned that experience around to advocate for juvenile cancer sufferers. Having won her own cancer battle, Helena remembers the chemo, the spinal taps but she also remembers learning that only 3% of the Canadian national cancer research budget is actually devoted to advancements for kids with cancer. Even though 1300 new cases are diagnosed a year, this is a small number to large pharmaceutical companies who don’t see the profit in dedicating research dollars for childhood cancer patients. Surely children’s lives are worth the effort?

Space Florida delivered an amazing tour that consisted of a visit to the Kennedy Space Center, a bus tour of the extended launch sites around the Cape Canaveral area, a ride on the Shuttle Experience and finally, lunch with Astronaut Jon McBride that brought the expanse of space a bit closer to home.

Helena had the opportunity on her tour to present a petition and make a statement to several members of the Canadian Federal government. She met with Member of Parliament, Anita Vandenveld (Ottawa-Nepean Riding), Minister of Health, the Honorable Jane Philpott and the Honorable Kirsty Duncan, the Minister of Science. Finally, Helena was able to meet and present her petition to the Prime Minister, the Right Honorable Justin Trudeau. In short, Helena was able to meet with the most relevant members of the Canadian Federal Government to request their assistance.

The Kennedy Space Center was one of the best ways to take a break from her speaking engagements with Walmart or representing the Hospital for Sick Kids from Toronto to Canadian and American representatives of the Children’s Miracle Network. It was a chance for Helena to reflect on the implications of real space travel and to see someone else’s science and research dreams come true; if theirs could, then perhaps her dream of greater access to research funding for juvenile cancer patients can as well.

Of course, it was also the perfect backdrop for her trip. After all, the experience was instigated by Star Trek fans – dreamers in their own rights as well. Enterprise Florida Inc. and the Kennedy Space Center partnered together to give a deserving kid an enjoyable experience that she will remember for the rest of her life.

Geek culture enthusiasts are often agents of great change. They not only entertain and amaze us with the devotion to their fandoms, but they often attract attention while doing it. This attentive power is harvestable and can function as a force for social improvement on a large scale. In this case, it brought attention to the cause of a young cancer survivor and to give her an enjoyable and appropriate experience that she would treasure.

Isn’t it great when communities come together?