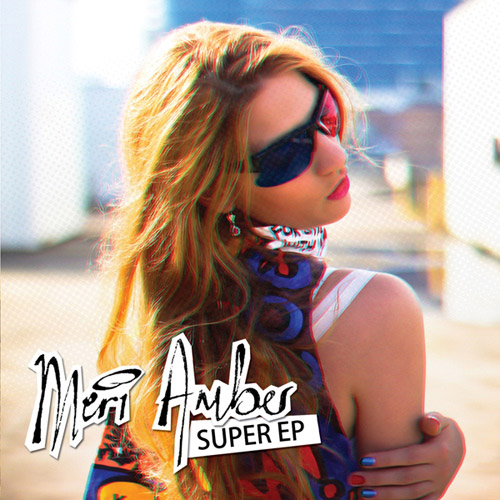 I often get review solicitations from various artists in the geek community, and much to my own regret I’m just as often too busy or overwhelmed to take these on but sometimes I do anyway. And I often end up being very glad that I did.

Or at least this has been the case with the geek music I’ve reviewed so far as per my posts covering terrific bands like Debs & Errol and Copy Red Leader. Of course, sooner or later I may end up reviewing a geek album I do not like, but fortunately that day is not today because today I have the pleasure of raving over Meri Amber’s  Super EP.

Super EP   is an exemplary example of what I like to call “lollipop pop”—music that makes you happy even when you’re feeling down, the way a crying kid at the doctor’s office stops crying when you hand him a lollipop.

This is actually Amber’s third studio album, and while the other two are also quite good her increased sophistication and confidence as an artist are readily evident here. And while her quirky, often humorous outlook was always apparent this is the first work in which she has overtly identified herself as a geek musician. Indeed, compared to her previous two albums,  Super EP  sounds like a geek’s coming-out party, borrowing motifs and symbolism from superhero comics, board games, video games, YouTube and that perennial visual obsession in geek culture (particularly in the cosplay world), big boobs.

Amber cites Mika as an influence and this is definitely one of the most immediately discernible influences.  Super EP  brims with the same over-the-top, Technicolor exuberance that characterizes the best of Mika, and Amber’s songwriting and enthusiastic spirit are equally infectious. Seriously, you could feel like you’re trudging through a black swamp due to a lousy day but then turn on this album and, by the halfway point, feel like you’re sliding down rainbow cascades.

Much like Mika himself, Amber has a knack for synthesizing a motley of influences—ska punk, punk pop and a whole lot more—and seamlessly integrating them within layers of instrumentation, vocals and electronic sound effects (video game samples are used to great effect as in the rousing launch single “My Superman” and “Nothing’s in Your Way”). But she’s also more of a rocker than Mika as the strong presence of 90s alt-rock influenced guitars attest to.

As good as all these songs are, it’s hard to pick a favorite, but I guess if I had to pick one it’d be “Kudos,” a joyful anthem to underachievers and to not quite living up to your potential:

I know I could be something
I know I’ve got the brains
But the last stop on this train I took
Left me dropped and feeling drained
So many deadlines flying
I’d be lying if I’d say
I cared in any way
I’m lost in all the could be’s
My path looks so deranged
Little little wins, mega mega setbacks

Given her own creative brilliance and prolific output, if Amber’s talking about herself here I’d be inclined to think she was being disingenuous. But no matter, the song works wonderfully as a tribute to the truism that there’s more to life than just success and fulfilling one’s potential. Sometimes the best of life is just hanging out and playing board games while having grilled cheese sandwiches and tea. You don’t have to have it all figured out.

And since I am, after all, the Pop Mythologist and my specialty is using pop culture metaphors and symbolism to write motivational essays, I’d be remiss if I didn’t mention “Nothing’s in Your Way,” a song that made me smile in pride with its themes of gamifying life’s obstacles into a Double Dragon-esque side-scrolling fighting game:

Perhaps one of Amber’s biggest achievements on this album is bringing her strain of geek music closer to the mainstream, which I, for one, think is a good thing. Some of the more hardcore geek music out there, while delightful to its target listeners, tends to alienate all but the most fervent of geeks. There’s nothing wrong with that either, but if we want our favorite geek artists to be able to create freely without worrying about food, there’s gonna have to be a bit more mainstream acceptance.

The Super EP is a work that can help with that. It manages to come across as entirely authentic in its geek aesthetic and yet could still probably pass as simply indie pop (as with the lovely ballads “Sum of Us” and “We”) or comedy music (as with the bouncy “Boobs,” pun intended, a song which I think could be adapted into a crowd-pleasing number in a musical). The way Amber pulls this off is by actually singing about the usual everyday concerns we all have (work, success, relationships, etc.) but clothing them with the language and images of geek culture.

If you identify yourself as geek, and even most certainly if you don’t, do yourself a favor and grab a copy of the  Super EP.  It’s an addictive, infectiously happy celebration of the nerdy lifestyle.