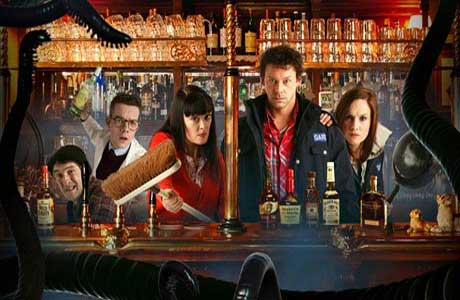 When I sat down to watch Jon Wright’s Grabbers I admittedly was a little apprehensive at first, fearing a cheesy, low-budget mess, but once the movie got going I knew it was going to be a fun ride.

The film’s plot reminded me almost instantly of Shaun of the Dead. A motley crew of characters on a remote Irish island are thrown together in the midst of a catastrophe – aliens, not zombies, in this case – and turn to the local pub for salvation and asylum. However, unlike Shaun of the Dead, their real salvation lies in the booze itself rather than the establishment as they accidentally discover that due to the unique biochemistry of the alien creatures that attack them, the higher their blood alcohol levels are, the more of a chance they have at surviving. As if the Irish needed any extra incentive to drink! You can imagine the fun that soon ensues.

The aspect of the film I was mostly impressed with were the visuals.  An admitted fault of mine is that I sometimes expect indie movies to be cheesy when they attempt horror or science fiction. However, the visuals here are beautifully done with believable effects that had me feeling I should be sitting in a proper theater watching this rather than at my kitchen table on a small laptop screen (I was sent a digital review copy).

The acting in the film was really spot on as was the writing. The leads, Lisa (Ruth Bradly) and Ciaran (Richard Coyle) bounce off each other with great comedic timing, Lisa being the straight-laced one while Ciarda is the functioning alcoholic and comic relief. It’s clear in the beginning that their characters are going to grow to love each other, but it’s still enjoyable to watch it happen anyway as they come together to stop the ever-growing alien threat. This is where a lesser film could have gone south, but this movie has enough going for it that some of the more obvious elements don’t detract from the overall enjoyment.

Grabbers is a fun and likable comedy-horror/sci-fi hybrid that fans of this genre in general, and Shaun of the Dead in particular, will definitely appreciate. [subscribe2]