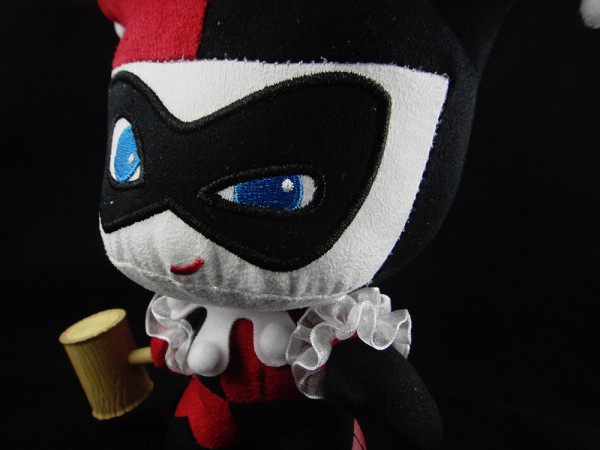 Everyone’s favorite maker of vinyl toys is back in a not so vinyl way.  Funko, the makers of the über popular Pop! toy line, recently debuted a new line of 6 inch plush figures called, Fabrikations.

Now, before you go clicking away from this page, keep in mind: these aren’t your average stuffed animals.  The Fabrikations line is modeled after Funko’s Pop! line of figures.  So, really, you’re getting less of a “plush animal” and more of a cloth figure (like how I just rationalized that?).

The current assortment of Fabrikations consists of a Star Wars line (Greedo, Yoda, Boba Fett) and superhero line (Batman, Deadpool and the focus of our review, Harley Quinn).  And, by the way, how random/eclectic is that assortment?  I think the only line they’re missing here is the Teenage Mutant Ninja Turtles. 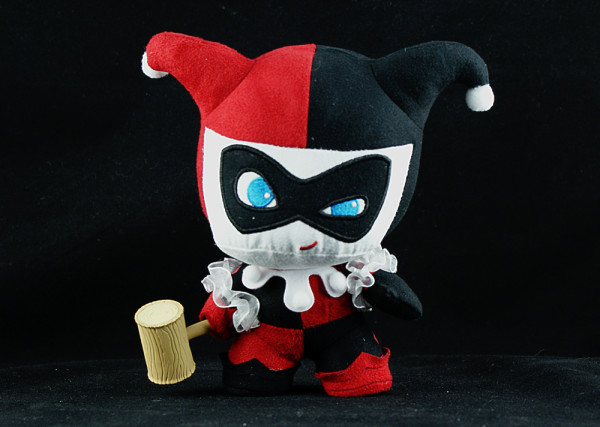 Your friendly neighborhood jman was lucky enough to see the Fabrikations lineup back in Toy Fair 2014.  And I don’t mind admitting here that I was pretty excited about it.  Sure, they’re plush and they’re cute-looking making them a little out of my collecting sphere.  But, I’m a big fan of things that are slightly off the mainstream, and the Fabrikations fit that bill rather nicely.

The figures come in an open display box, with some nice looking character designs on it.  I’d almost say that the figures were worth keeping in the box, it’s that sharp.  But, as a wise man once said:  Open your toys!

And that we shall.  Harley Quinn here is a nicely crafted figure.  Much like her Pop! counterparts, there isn’t much in the way of articulation; only her head turns.  I had my fingers crossed that maybe her arms would move, but sadly they don’t.  Especially since she has her trademark oversized mallet sewn into her hand.  It’s not the end of the world, probably wouldn’t have been able to move her arms much, besides.  What with her oversized head and all.

Another borrowed feature from the Pop! line is the minimalist look.  You gotta give credit where credit is due.  With just her mask, eyes and the smallest curve for a mouth, Funko has managed to capture Harley’s slightly off kilter nature.  It also helps that she’s attired in her classic Batman:  the Animated Series look, complete with frills and all.

The only real drawback to the figure is that she’s a bit lopsided.  Her oversized head makes her a little difficult to stand.  The figures do have a “weighted” body, though.  It feels like there’s some sort of beanbag filler in her lower torso.  That’s supposed to help them stand.  And it does, but, they still have the tendency to tip over.  It takes a bit of shifting around, but you can move those pellets enough to compensate for Harley’s head.

Then there’s the price.  The Fabrikations retail for $19.99 (give or take, depending upon your point of purchase), which feels a bit on the high end, but when you consider the Pop! figures retail anywhere from $9.99 to $14.99, I suppose the price isn’t too bad.  It’s certainly not going to stop me from getting a hold of the upcoming Fabriaktions Rocket Racoon figure…