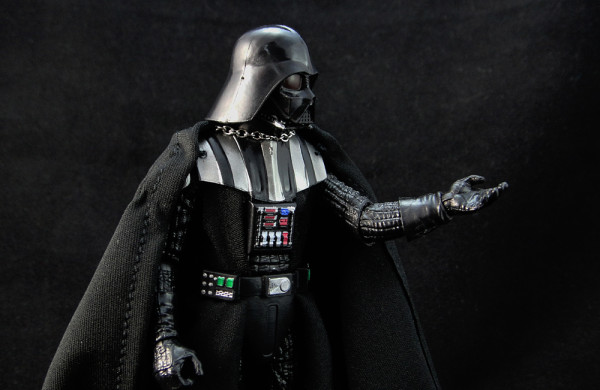 Finally!  After four waves of figures we finally get the baddest of the bad, the ultimate Sith Lord, Darth Vader.

And believe you me…the wait, while pretty much unwarranted, was worth it.  Hasbro really outdid themselves with this Black Series Darth Vader 6″ figure.  Top to bottom, the attention to detail is great.

Just take a look at his cape, for instance.  When has the Sith Lord had such a nice, flowing cape prior to this figure?  Probably never.  But, if that wasn’t enough, Hasbro really up their game by sewing in these leathered corners.  I know, I know.  I know what you’re thinking.  You’re thinking:  “Why is that so great?” Well, I’ll tell you.  It’s so his flowing cape doesn’t flow all over the place when he’s storming down the halls of a Star Destroyer looking for Admirals to punish.

Vader’s also got his, for lack of a better term, “hip skirts.”  I’m not exactly sure what they’re for other than to make his already imposing cape more imposing (though I sometimes wonder how come no one called him out on those hip skirts).  Then again, I suppose if one wants to avoid a Force Choke, one probably doesn’t make fun of Vader’s choice of clothing.

Much like the other figures of the 6-inch Black Series line, Darth Vader is super poseable.  Limbs move in all directions, he turns at the waist and his head not only rotates, but moves up and down, as well.

But, for your friendly neighborhood jman, the removable helmet just seals the deal.  Yeah…the helmet is just a little bit off but big deal.  It’s the best version of the removable helmet I’ve seen on a figure yet.  And the scarred, pasty white head of Anakin is super creepy too.  But, at least he can look upon his son with his own eyes.  Now…go!  My son.  Leave me.

Sorry, got caught up in the moment there.

Oh…and another nice touch?  The blade of the lightsaber comes out of the hilt!  I thought I broke the lightsaber trying to get the Sith Lord to hold the handle.  I was more than a bit relieved when it turned out it’s removable.  Thank the maker!

Vader’s included in the first wave of figures for 2015.  Also in the wave are Jedi Luke, Chewbacca and a new Sandtrooper.  The packaging for 2015 has been updated with a much more visually appealing blue border, as opposed to the orange of 2014’s line.

The downside?  The price of these figures has gone up a few bucks.  It’s a sharp increase, one that I’m not really happy about paying.

So…what should you do?  Well, if you’re a Star Wars fan, there’s no question.  Get this ASAP.

And speaking of Star Wars, we’re talking Vintage Star Wars toys on the brand new episode of the Almost Internet Famous Internet show.  How have you not checked it out yet?