Hawkeye, Blue Ear, why we need a deaf superhero and why I’m still waiting

This month I was extremely excited about the release of Matt Fraction’s newest issue of Hawkeye.  Issue #19 was set to release on June 18th, about 50 years after Hawkeye’s first appearance in Tales of Suspense #57.  It was also, according to an earlier issue, Clint Barton’s birthday.  So it was set to be a big day for Hawkeye fans.

But on Monday, June 16th, I sat in my car and nearly cried.  The issue that I’ve been waiting for for over two years has been delayed once again.

Wait, Clinton, why are you getting so upset over a comic book?  Especially one about a guy who doesn’t even have super powers?  It’s not like he’s Iron Man or Thor or the Hulk.

True, he is not Iron Man or Thor or the Hulk.  He’s not a super genius–he makes dumb mistakes about every other page, actually–and he doesn’t have any superpowers.  He doesn’t have super strength or super speed, and most people will immediately say he’s not Avenger material.  He can shoot a bow and arrow, that’s about it.

But he is also the first deaf Marvel character.

When I started reading about Hawkeye, I honestly did not know this fact until I bought his 1988 solo run.  It’s a short run, only four issues, but without giving too much away he becomes deaf after an accident.  He then wears hearing aids that he hid under his goofy purple costume, but every so often the comic will remind readers that he has one.

For whatever reason, Marvel rarely mentioned it after 1990 until the entire Marvel universe was retconned (meaning the universe or plot is wiped clean and starts over).  Hawkeye is killed off, then brought back to life by a character who only remembered him as a fully-hearing person.  And since then, Clint Barton has been a regular hearing character.

After I read the solo issues and started reading other comics he appeared in, Hawkeye began to work his way into my list of favorites.  He’s a typical dude who watches TV, goes to work, and screws up literally every relationship he’s ever been in.  He’s relatable.  He is the Avenger that almost any reader can relate to in some fashion.  He’s not the brightest–he had little formal education after the second grade.  He was raised by a circus along with his older brother.  He’s not rich or powerful, just really good at what he does.

But I always wondered, will he ever be deaf again?

In 2012, Matt Fraction’s Hawkeye released its first issue and I bought it less than an hour after it went on the shelf.  It kicks off as Clint is falling from a building and landing on the roof of a car, so we’re off to a good start.  Then he feeds a dog a slice of pizza and saves the dog from his abusive owner.  He takes the dog to the vet, gets him fixed up, and brings him home.  That’s all that happens.  Nothing heroic, no repulser blasts or flying hammers or giant green rage monsters.

And I absolutely loved it.

Matt Fraction is an excellent writer; he’s witty and subtle and he captures Clint’s personality.  And David Aja’s style amazes me.  I was so excited I even wrote an email to Arrow Mail (the Q&A at the end of each issue) that was published in issue #3.

Okay, so no deaf Hawkeye this go around.  Oh well, the story is still hilarious.  I was a little disappointed but I kept buying every issue religiously each month, even slogging through the issues that focused on Kate Bishop.  But in between the first issue and last year, a number of interesting things happened.  A random tweet I sent to Clark Gregg was answered, and suddenly Agent Coulson knows sign language. 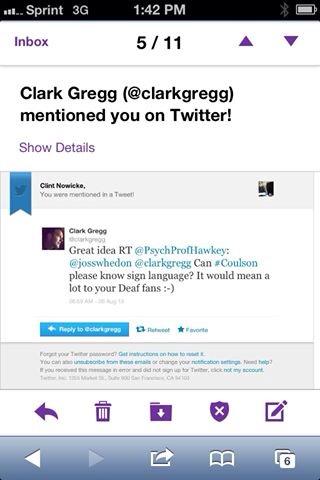 Matt Fraction’s Tumblr account was flooded with questions similar to mine–will Hawkeye become deaf again?  I doubt this began because I asked the question in issue #3 or because of the tweet (although for my ego’s sake just tell me that this was all my fault and I’ll be happy).

I think it might be because of the influence of a certain someone I happened to meet around this time, a four-year-old kid who’s one of my favorite “real-life” superheroes in existence.

Like me, Anthony wears hearing aids.  The hearing aid for his left ear he calls ‘blue ear’ because the ear mold, the rubber part that goes inside the ear, is a deep blue color.  And one day before school his mom, Christina D’Allesandro, went to help him put in his hearing aid but Ants refused:

If you’re wondering, Anthony now wears his hearing aid regularly.  He now has his own little superhero costume of Blue Ear that for a while he refused to take off because he wanted to play in it so much. So that’s one small victory.

Phonak, the Swiss hearing systems company, even created a poster based on Anthony and his story that involves Iron Man encouraging kids to wear their hearing aids (Iron Man states that his suit is just fancy technology that helps him out, like hearing aids do).

And then it finally happened: Matt Fraction confirmed that an entire issue of his Hawkeye series would be in sign language, similar to the “Pizza Dog” issue in which there are hardly any spoken words and the story is told through pictures and images from the viewpoint of the dog Clint rescued.  Then the story set itself up so Clint would lose his hearing once again.

This happened in February, an entire year after Fraction confirmed the sign language issue.

So I figured March would be THE issue.  There would once again be a deaf Hawkeye.  But March came and went.

There were other issues that were published; one focused on Kate Bishop, another backtracked to a Christmas issue and was a big allegory told through a children’s TV special.  But no deaf Hawkeye/Clint Barton.

And I’m still waiting.  The current issue was pushed back until the end of July, though not because of anything Fraction or Aja did as far as I could tell.

Then what do you have to be upset about, Clinton?

The reason I am upset is because finally there’s going to be a superhero (a deaf Hawkeye) that I can look up to who is not perfect, and has the same imperfections as I do.  Of my family, I’m the only one who wears hearing aids.  I’m the middle child between my older brother and younger sister.  I can hear enough to talk to someone, but not enough to have a conversation that doesn’t end in frustration most of the time.  I’m in the middle of everything, and until last year there were no superheroes in a similar predicament.

What I liked about Hawkeye in the 1988 comic was that, after he lost his hearing, he just…ran with it.  He had issues with his hearing aids that many users face (such as squealing and feedback), but it never stopped him from doing the things that he loved to do.  He kept working, he kept being an Avenger.  Hawkeye worked with his hearing loss and owned it.

But every month, I get more and more disappointed.  This forthcoming issue isn’t important to only me, it’s important to everyone who has ever felt defective and lesser because of a physical problem.  So where are the superheroes who are not perfect physically?  People usually bring up Daredevil at this point, but Daredevil has superpowers that basically negate his blindness.   Marvel did create another deaf character named Echo (Maya Lopez being her actual name) who, similar to Daredevil, could copy anything she saw and practically lipread through a concrete building.  This isn’t relatable, it’s not the deaf experience.

So where are the fictional superheroes that tell me it’s okay to be deaf?