How to Make Novels Popular Again (Serialize Them!) 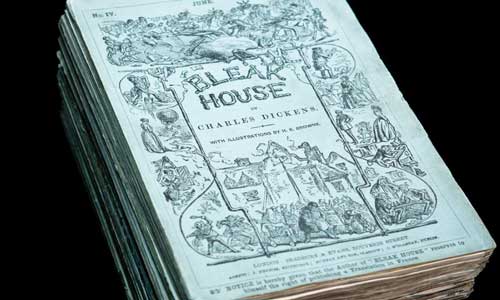 Art forms evolve. They go through phases and changes and adapt to their culture. Those changes may be easy to point out in retrospect, but they’re often difficult to notice in real time. 21st-century culture has seen more change than any decade before it, and artists strive to keep up. Narrative art in particular skates on a tight string. Literature faces a crisis: adapt to modern sensibilities or fall from pop cultural relevance.

Serial fiction presents a story in segments, separated by gaps of time. It’s a form that’s been very popular in the past.

Charles Dickens released several novels in serial format, such as Bleak House and Oliver Twist. Readers lined the street – much like Star Wars fans – to buy the latest installments and keep up with their favorite characters, such as Master Bates. In the 1930’s and 40’s, Hollywood itself saw a miniature renaissance of live-action serials, which were shown before main attractions. Children sometimes bought tickets to a show, stayed for Flash Gordon or Zorro, and then left before the feature. Those serials had a great influence on George Lucas, and thus Indiana Jones and Star Wars.

Today, serial fiction and storylines have seen a revival in TV dramas and comedies. Shows like The Sopranos, Modern Family, Weeds, The Walking Dead and Breaking Bad have seen mammoth ratings. On the contrary, book sales are down, and frankly, not many people are talking about them.

It’s hard to know for sure why this change in taste occurred, but it seems to me a direct reflection of the Internet Age. With such varied distractions as Facebook, YouTube, Twitter, blog posts and RSS feeds, the modern mind is in a thousand different places at once. Attention spans have gotten shorter – which is news to no one.

Like it or not, the modern audience finds it easier to digest small chunks of story set within a larger framework, as opposed to the all-at-once strategy of novels.

Literature should borrow from the success of television and invest more in serials. Its numbers are dwindling and its influence weakening. It is outdated in its method, and needs to adapt. The lush description of 19th-century prose once morphed into the sparsity of Hemingway, remember. Taste and culture have changed, and books don’t fit in like they used to – or, at least not as well as television does.

I’m not saying books lack quality, that they’re not popular for good reason. At the very least, Cormac McCarthy is alive so argument over. I’m just saying they might not jibe with the next generation of readers and viewers much – the users of Facebook 3, or whatever.

Also, I know a section of the lit crowd still wishes their art could be famous again. (That ended with Hunter S Thompson, I think). To them, my suggestion would be to call for a revival of serial fiction. When Stephen King published The Green Mile as a serial novel in 1996 it was a novelty and something of a marketing gimmick, but with enough demand serial novels could make a genuine comeback and reinvigorate literature’s popularity.

Of course, the novel itself will never really go away. It’s too beautiful an art form to just vanish one night, and there will always be an audience for it – especially me. It’s ridiculous to think otherwise. I’m just speaking from the wide-scale view here, through a pop culture microphone somewhere near your Britney or Kanye.

However, if I could have the talking pillow for a second, I’d like to throw a maybe out there: What if more and more writers embraced the serial? There’d be so much more talent finding so many more methods to reveal a character and tell a story within the serial shape.

I know a fair amount of critics scorn the serial as a lesser genre, but if so much focus was applied to it at once, we’d master the form relatively soon. And then we’d have masterpieces, with all the beauty and profundity of a classic novel. Then we’d have a route to prominence in popular culture again.