‘Howtoons: [Re]ignition’ is a fun, educational comic that engages kids in science 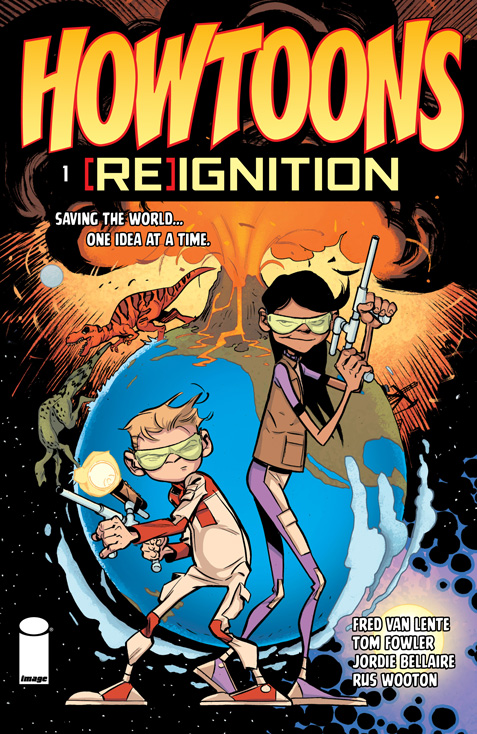 “Saving the world… one idea at a time.”

Howtoons: [Re]ignition is an educational series from Image Comics created by Nick and Ingrid Dragotta, Dr. Saul Griffith, and Joost Bonsen with story writer Fred Van Lente, artist Tom Fowler, colorist Jordie Bellaire and letterer Rus Wooton. Issue #1 re-introduces the young hero and heroine Tuck and Celine from Howtoons: Tools of Mass Construction. In this story, our intrepid adventurers are staring down an ecological apocalypse brought on by global warming. Unfortunately this globally warmed futuristic world is about to be FUBARed by the reigning energy conglomerate in a ham-handed attempt to ‘fix’ the climate by blowing up a volcano with nukes.

The mission of this comic series is to educate and engage kids in the science knowledge necessary for them to function within and positively impact the world they will inherit. In this respect, the creators have picked an excellent topic with which to start. The mechanics behind climate change are often very poorly understood and communicated by our business leaders, policy makers, and the general public as a whole. While we may not currently have all the answers, arming as much of the next generation as possible with the background and tools we do have will give them a great start towards a solution. I sincerely applaud the creators of this comic for playing their part in this effort.

And the effort itself is extremely well executed. The artwork is colorful, dynamic, and reminds me a bit of a PBS television series, Cyberchase, which my daughters adored when they were younger. The story is engaging, memorable, and interspersed with fun do-it-yourself projects. **Teaser alert** I have already made the “PVC pipe marshmallow shooter” featured in this issue and utilized it at my workplace with great results!

In short, there are more and less effective ways to educate kids with the goal of retaining knowledge into adulthood. During my childhood in the 70’s I can recall glaring examples I experienced of both types. On the ineffective front, the Carter administration at one point instituted an educational effort to teach the metric system. As the comedian Eddie Izzard puts it, the US adopted the metric system for about two weeks, and then I think it was taken hostage at the Iranian embassy or something. Needless to say, I learned and retained nothing from this venture, despite the government’s best, unorganized efforts. What I do remember however, with near total recall, are the lyrics to nearly every Schoolhouse Rock video. Who could forget “Conjunction Junction”?

These educational endeavors that draw from children’s natural interest in pop culture and are employed with creativity, animation, and humor, are the ones that get retained and Howtoons has the potential to become one of them.