And so the Games come to an end. What started as a rather modest film adaptation of an American young adult science fiction version of Battle Royale, with less of a focus on the bloodbath and a greater emphasis on pageantry, effects, and the requisite teenage love triangle, closes with a grim charge of futuristic urban combat filmed almost entirely in grayscale and a near non-stop series of explosions, explosions, explosions. Hunger Games: Mockingjay Part 2 moves the series far from the arenas of the first two films, where every path and tree potentially contains a trap or mutated threat, and into the streets of the Capitol, where every block definitely contains a trap or mutated threat. The series has come so far and yet, somehow, regressed.

Mockingjay Part 2 picks up immediately after the events of Part 1 with Katniss recovering from Peeta’s violent reaction to their reunion. If nothing else, this opening makes it clear that the two films are meant to be viewed as one continuous movie. Sadly, the two are so linked that the problems of Mockingjay Part 1 directly lead the problems of Part 2. Where Part 1 felt like a dull stretching of the story, Part 2 is a stretch followed by a sudden, overstuffed crunch. 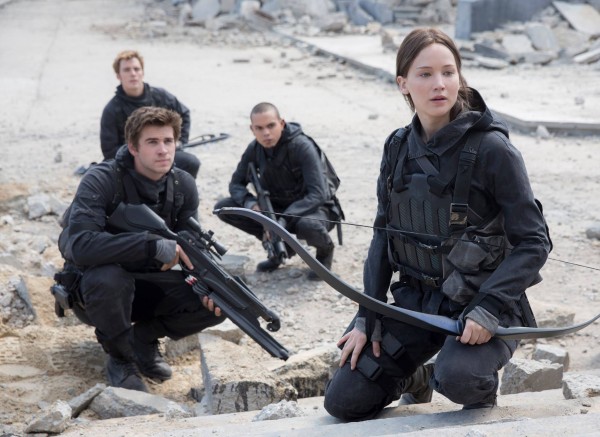 At this point there are certain elements which can be assumed from a Hunger Games movie. There’ll be satire about manipulation and violence, the action will be well staged, none of the imagery in the film will be as striking as that in the marketing, and Jennifer Lawrence will be solid. After four years, an Oscar, and a dozen other roles, Lawrence and Katniss have reached a point where the actress and character feel like two separate people. We aren’t watching Jennifer Lawrence as Katniss Everdeen. We’re watching Katniss Everdeen in the (clearly not 17-year-old) body of Jennifer Lawrence, clunky dialogue and all. Her place as star is supported by an excellent performance by Julianne Moore as Alma Coin and an even better one from Donald Sutherland as President Snow. Sutherland’s performance is so compelling in fact that he makes us smile even as he’s conspiring to wipe out hundreds of innocent people. He’s an awful person, yet his dry delivery and wicked smile make him almost comic relief in a film overwrought with heavy-handed messages about the horrors of war.

Other constants are also maintained: Woody Harrelson’s Haymitch is as much the gruff sage as ever, Elizabeth Banks gives up her glam for some quiet reflection, and Liam Hemsworth and Josh Hutcherson continue to struggle during their considerably greater amounts of screen time while the acting heavyweight receive almost none. Sadly, other elements are almost absent: Stanley Tucci is demoted to one forgettable appearance, Jeffrey Wright has two, and Phillip Seymour Hoffman’s death during production clearly dulled the impact of what would have been his character’s meatiest work since Catching Fire. Meanwhile, after being relegated to a blink in Part 1, Jena Malone absolutely crackles in her handful of scenes, so much so that I can’t help wondering how different these last two films would be if she were a bigger part of the story.

Perhaps the most interesting experience in Mockingjay Part 2 is in considering how different the series has become, at least on the surface. Where Hunger Games and Catching Fire had several parallel scenes with life in the Seam, Katniss and Peeta being chosen, the parade of tributes which included all the pageantry and Stanley Tucci leaving large bite marks in the scenery, and finally the games themselves, Part 1 broke completely from that structure with no games, no big showy parades, muted colors, and a big emphasis on propaganda, desperation, and general sadness. Looking at the story now, as represented by Katniss herself, perhaps quite a different picture. No longer a small scope narrative the events are nation-wide. Yet, in all actuality, little has changed. There’s still the new cast of expendables, the same traps, and the narrow focus. As the film itself states, the arena has moved to the Capitol. Part 1 is basically the same build up the first two films did in 40 minutes stretched to two hours, making Part 2 the games sequence all over again. Except this time the need to up the make an even bigger climax finally breaks the formula.

In delaying the big events of the final act until a separate film, Mockingjay Part 2 is stuck trying to pack two movies worth of happenings into a single film (which is funny since the filmmakers of course decided to stretch one book’s worth of story thus creating the problem in the first place). While much of the action is gripping, even horrifying at times with jump scares and sequences that wouldn’t be out of place in a creature feature, there is simply too much of it. Great action films now that there need to be highs and lows in the tension, giving the viewer a chance to catch their breath before ripping it away with the next setpiece. Mockingjay Part 2 does this well until it doesn’t. What follows that point is a never ceasing series of explosive events blasting across the screen with little time to let the dust settle before the next one comes. By the end what should be an emotional climax is more of a dull thud. A satisfying conclusion becomes a rush to the end with a slow, unnecessary denouement tacked on. In other words, the audience may become so numb that it no longer cares.

Total runtime aside, it’s possible that viewing the two Mockingjay movies together would provide a more satisfying experience, allowing for a long build-up before the propulsive (albeit rushed) climax. Still, it’s impossible not to think that both films would have benefited from just being one from the start, even if it meant cutting certain scenes and subplots from the book. Several subplots were cut anyway, so perhaps more would have given adequate time to let the big events land with the impact that they need. As the weakest of the Hunger Games Trilogy, Mockingjay had an uphill climb from the start. Breaking the story into two parts did it no favors. Rather than leave the audience wanting more, Mockingjay Part 2 is the type of conclusion that leaves the audience with far too much.